We have a TV in the daughters room with a co-axial input to a freeview box then to the telly, but no internet. She is wanting to record another channel while watching freeview TV.

I know nothing about freeview recording and bought a freeview recorder with 500 disk drive, but when installing it went through a start up instal sequence that required a connection via internet, so I was stumped as there is not internet in daughters room. I  returned the device and got my money back.

Also how about this cheap device below (picture) that works using a plug in memory stick to store films and shows, instead of a hard drive. Is it any good, what size of memory stick would you need to store a lot of hours of TV? What price for the memory stick? At least it does not need internet connection as it has none LOL.

PS..does this box below have the freeview channels in it, as it does not mention how many channels, or does it just go in series via coaxial cables with a freeview box? I just do not understand this stuff. 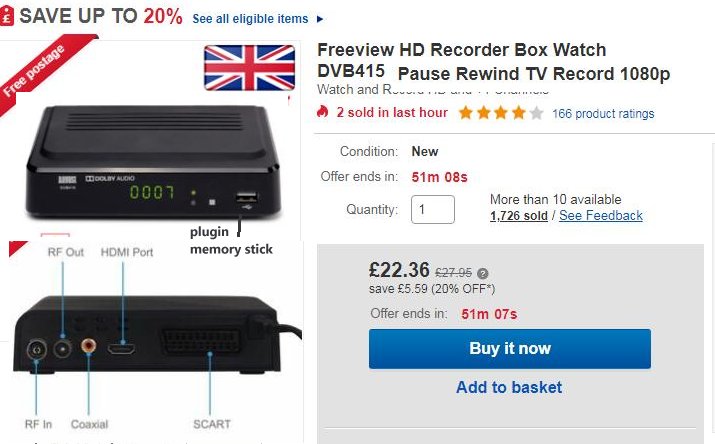 i can't really help, but i bought a couple for my next door neighbour recently, similar boxes to that one, if you read some of the reviews on ebay and amazon the quality of recording and space seems to vary a lot.

from what I read they've got v simple processrors in the cheap ones, so don't do any compression, so use up a lot of disk space, i.e. i think it's more to watching something from earlier in the day rather than watch a whole series at a later date.

we've not used them yet, he just wanted them as spares (don't ask)

it gets the channels liek olde worlde TVs did - rf cable from aerial in loft/on roof, goes into box - box connects via scart/hdmi to tv. so you set your tv to scart/hdmi

in my neighbour's case goes into a vcr, which confused him quite a lot that he had to set the timer to use AV2 regardless of what channel he wanted to record, and not 1,2,3,4 :(


regarding internet connection - it may need that to see if there's a firmware update, couldn't you set it up in one room, then move it to the right room?

Unless it says otherwise, all Freeview devices have just one tuner, so watching one channel while recording another isn't possible on something like an HDD or USB stick in a Smart TV. My Sony TV is like that, it takes USB sticks in the side for recording, but it's just the channel that the TV is tuned into. As for size, I wouldn't use any USB stick smaller than 64Gb, depending on the device it might require a larger size. Recording off Freeview isn't that efficient though.

Some of these devices that require internet for set up can be bypassed, or failing that, set them up elsewhere as admars says. I've still got an old PVR combi plugged into my Panasonic TV and that just works like a VCR (part of it is a VCR), it has its own Freeview tuner, separate from the one in the TV, and that way you can watch one channel while recording another. It has a 500GB HDD and while it can only handle SD, it can get around 120 hours of recording. If it was HD, I'd expect it to do less than 30.

From what you say about a Freeview Box plugged into a TV, I assume it's a CRT TV and not a flat panel screen, and we're talking SCART and UHF inputs and not HDMI?

Just use the TV tuner to watch the program and the DVR one to record the other?

Thanks for the replies, I have decided to buy one of these memory stick boxes off ebay at £24 and should get it in the next week or two.

The one i have bought has freeview channels off the TV aerial and does record one channel and allow you to watch another at the same time, so that ticks all the boxes. No wi-fi connection.

It allows you to connect up to 1Tb, I assume thats some sort of costly hard drive disk thingie. In the meantime i have a spare 64Gb stick, and the guy emailed/replied to me that it uses 1Gb per hour of normal TV recording (not HD). So that should do my Daughter to start with. Might get her a 128Gb stick for under £30 later.

Hope all this works, will inform you later of results.

Well it arrived today, that was fast, and now connected up to my Daughters TV. Cheep and cheerful and works great. The video quality is brilliant, just as good as watching the freeview TV input. It has all the normal TV freeview channels.

Downside being cheap, is it saves the recording as a 'channel plus numbered' file rather than a named file, but you can rename it, say from 'blaze1235' to 'antique dealers' if you want to. But you can preview the recordings instead, to check whats recorded rather then renaming. I think my Daughters just going to do that. She says she has better things to do rather than renaming LOL.

It also has pause live TV and then it records and plays later on. Just like sky+. It said when formating the 64GB memory stick after plugging it in, there was 57GB available, no idea where the 7GB went, but that still gives 57 hours of video-ing.

Being a cheapo unit it does not have scart in scart out. Only scart out, so could not connect her DVD player in series like her last freeview box, so now had to connect the DVD player separately into another aux input to the TV. Good job the TV had many aux inputs.

Although it says 'wifi ready' on the box, there is no need for it, or even mentioned on the initial setup procedure, so works fine without wifi.  That's what we wanted.

Overall, quite a good little unit, but made me have to think how to connect, as more used to connecting a sky+ box in and sit back and record.