Info and forum posts by 'admars'

About this user: This user has chosen not to submit a description :(

The women's 100m was interesting, mostly because the end was like a soap opera/playground dinner lady telling kids to shake hands ;)

Even more excited about skateboarding park coming up in the week.

ZZ Top's Dusty Hill said that a late-'70s stint as an airport worker helped keep him from turning into "a rock 'n' roll asshole."

Exhausted from years of nonstop touring and recording, ZZ Top took what was initially supposed to be a 90-day break in 1977. The hiatus instead extended to two years, during which Hill and bandmate Billy Gibbons independently grew their trademark chest-length beards.

RE: [VIDEO] The Grand Tour Season 3

I thought this one was really good, quite a few genuine laugh out loud moments :)

just watched the women's football, could have gone either way

then watched the BMX racing, shame I knew the result, but still exciting stuff!

managed to find the surfing, it's not much of a spectator sport, as a lot of it is watching them wait for the right wave. When they do, it's quite amazing. Funny thing, I was watching it thinking "that guys good" even though I know little about it, then the commentator said he's world number 1 :)

and I saw some of the canoe slalom, that's bonkers :)

A statement on the band's Instagram account read: "We are saddened by the news today that our Compadre, Dusty Hill, has passed away in his sleep at home in Houston, TX.


Code:
Quote:
The US government has sold a one-of-a-kind Wu-Tang Clan album previously owned by a drug firm executive once dubbed the "most hated man in America".

Martin Shkreli, who became notorious for hiking the price of a life-saving drug, bought Once Upon a Time in Shaolin for $2m (£1.4m) in 2015.Quote:
After learning that Shkreli had bought the album, the group decided to donate "a significant portion" of their proceeds to charity, Wu-Tang member RZA told Bloomberg.

maybe the conspiracy nuts about it being created in a lab have a point :( ... 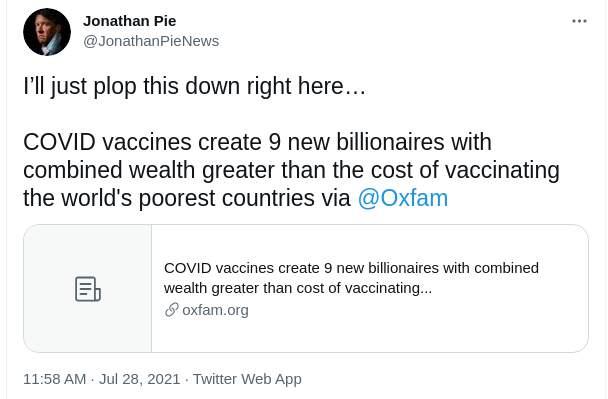 
Quote:
Lucasfilm's Industrial Light & Magic (ILM) has hired to its team a YouTuber who went viral with a video that showed him using deepfake technology to improve upon the special effects in an episode of "The Mandalorian."a bit like Catch me if you Can :)

damn, I'm turning this into an obituary thread :(

This is a breaking news story.

Joey Jordison has passed away at the age of 46.

The drumming legend – who played with everyone from Slipknot to Murderdolls to Rob Zombie – died on July 26, ​“peacefully in his sleep”.

I only saw Slipknot once, just as they were breaking with the first album, they were awesome live.


Rolling Stone mentioned sickness in the past:

yeh, I was a bit annoyed to go to BBC to watch the skateboarding and on page of events it had

watch X's winning runand a few below itwatch the entire eventI understand that someone wants to watch 3mins, rather than 90mins, but change the picture and comment
:(

Interesting thing about the Olympics is, you tune in to watch one sport, and then get sucked into watching something you never before had any interest in, or had never heard of.

So I watched the entire men's skateboarding park finals earlier, which was good, and now am watching the beam. As an ex skateboarder, I have some appreciation of that, and even though I wasn't good, I can sort of see how you do certain tricks.

Watching the beam, I'm just confused, how anyone can do that stuff. I can do a front roll just about still, I may wobble to one side a bit, when showing the girls, but it's sort of there. Still can't do a backwards roll :(

I've just seen 16 year olds backflip, gracefuly, no hands touching the beam, as if it's normal.

Looking forward to watching surfing, as I don't know how that works in competition, I've been surfing twice, I'd give 10 to anyone who stays on for 5 seconds :)

Sports climbing looks interesting, and I'm looking forward to BMX freestyle, I wonder what other things I'll watch while I'm there :)

I see Team GB has a couple of medals :)

Quote:
sj says...
"Has this been well received generally? I felt it added pretty much zero to the Marvel universe story."
that makes you a sexist misogynist then, you have to love anything that doesn't have a traditional hero ;)

Quote:
"As an athlete on the elite level, everything we do is very calculated and understood. For me, in the training cycle, especially leading up to trials, I didn't want to risk any days out. There were periods where you take a vaccine, you have to deal with some days off."

Andrew said he has no plans to be vaccinated in the future.
During Euro 2021 covid jab was discussed and the info didn't seem to be out there, but seems some athletes are getting it, and some aren't, by choice. I know I was out of action for 1 day after 2nd jab, but in my eyes that's a small price to pay, and my boss was fine with that, I guess he's a reasonable human being ;) It didn't affect my chances of not getting a gold in any competition :(

I can see how other athletes would be annoyed at the selfishness of one of their peers not getting vaccinated, but then again, maybe a lot of them think because they are (mostly) young, fit and healthy they don't need to worry, but with the figures so high over there at the moment, and the number of athletes who couldn't go last minute, or have been sent home, seems they should be.

So, just got sms test result back for the kid that was sent home from school, it's negative,  was going to phone up today to chase but didn't get round to it, as the info says should hear back in 5 days, and it's on that today. test arrived here quickly, and got back to them quickly, so maybe they're busier as the missus heard back a couple of days after sending hers back, a few weeks ago.

we've had no more notifications from the school, so hopefully the poor kid who got it, didn't pass it on to anyone else.

there will be a 2nd series

events are starting before the opening ceremony, which is on Friday!

An Indian friend went back to see family a while ago, he now lives and works in USA,  and even in the city he went in in India, people weren't wearing masks, no social distancing, just carrying on as normal, from what he said, most people just didn't understand the magnitude of the problem, and the government was more wishy washy than ours.

He couldn't wait to leave again.

People there were heading to the Ganges to clean themselves, we didn't have that with The Thames.


Hip-hop star known for his personality, beatboxing and freestyle skills scored his biggest hit in 1989

I recognised the name, so put it in youtube, that song was first that came up, one of those "oh, yeh, I remember that song" moments

as she gets older, and bigger, and heavier, she'll be even better, more momentum to go higher, and not have to pump so much, you can see she's exhausted towards the end.

When she lands in Tokyo, Sky Brown will become one of the UK’s first Olympic skateboarders – and, at 13, the team’s youngest ever member. Will her next trick be a gold medal?

lol, yes, I know what you mean, but I quite enjoyed it :)

Quote:
Sky has revived ‘Never Mind the Buzzcocks‘, the iconic pop culture panel show, which is set to return exclusively to Sky and NOW as a Sky Original.

Quote:
The renowned music-themed comedy show will return to our screens as an 8-episode series, plus a one-off Christmas special, with brand new host Greg Davies (‘Taskmaster’, ‘Man Down’). Returning to the show, Noel Fielding (‘The Mighty Boosh’, ‘The Great British Bake Off’) will be a team captain opposite Daisy May Cooper (‘This Country’), with Jamali Maddix (‘Hate Thy Neighbour’) featuring as a regular guest.

it "should" keep things interesting, so that a team could have 1 all-star and a few good players, or a roster of above average. That's aided though by their draft system of getting players from college, team that did worst, gets first pick etc.

obviously there are problems though, teams get round that by trading their draft picks for players, and as I said before, players choose to drop their salary to entice a good player, I suppose when over 1/2 your annual income comes from sponsorship, you don't mind losing a few k from your "main employer" ?

Overall, for NBA it does seem to work, LA Lakers will always attract big names, but they won't always win, and "underdog" teams do become successful for a few years, then someone else does.

I don't understand your argument Rob, I think you'll still have the wealthy club owners, the wealthy players, some coming from the streets, and the wealthy agents.

Maybe it depends on who you support, if your internationals play for Scotland you like the idea, if they play for England, Portugal, Spain, Italy, Belgium, not so much? ;)

i think as we've said before it works well in USA for basketball, as they can't really go elsewhere, and big stars have been known to take big pay cuts to lure talent to their team.

But here I suppose if Man U player has to take pay cut he'll go abroad.

they have it in rugby don't they, but one of the big clubs blatantly didn't follow the rules so they could keep several stars.

crap, just been told to pick up one of the kids, their class has to isolate 7 days

there haven't been any cases reported from the kids' school in ages, until this week, 2 yesterday, another 1 today :(

maybe now the football is over it will go down again, oh, the government is relying on ppl being sensible :(

enough ppl can't follow the rules, when there are rules, and guidelines, so they're not going to listen to Dr Xand et al on TV saying, "you should still wear a mask even though you don't have to"

RE: [VIDEO] The Pie Thread!

tickets are on sale now