About this user: Calm down girls... he ugly.

Don't be so cynical. It's a massive £15 billion... spread out over several years... worth 0.07% of UK GDP or the price of two ineffective test and trace systems.

@ Bandi. I think you missed that whole scepticism bit I mentioned.

Quote:
bandicoot says...
"For those who have seen UFO's up close and personal, and so do believe, this TV show was disgraceful being so skeptical, and so one sided, against the possibilities that alien life exists"
It's quite likely that alien life, even intelligent alien life, exists somewhere. Maybe it's even fairly commonplace considering the vastness of the universe. Astronomers have been doing serious work for decades trying to find it, so there's no hiding of info. But your default position should always be to be sceptical. It's highly doubtful any aliens have visited us given how incredibly far away via planets are likely to be from us. ''Let's keep our minds open... But don't keep your minds so open that your brains fall out.'' - Walter Kotschnig.

It just gets madder.

RE: Changing my free Antivirus recomendation

Quote:
Snaps says...
"I've never used anything else since getting the new PC about 3 years ago and not had any problems."
It's all I use now too on our Windows machines, plus a bit of malwarebytes.

Quote:
Si Wooldridge says...
"Not quite as weird as this:"
No idea who that guy is. But loads of people have been caught out like this (and way worse). Did you know the story about comedian Joel Dommet? 'Skype sexed' and was subsequently blackmailed.

Quote:
Si Wooldridge says...
"Still, it was a sting so unless the full footage is released then you don't understand the context.  Assuming the context is that he was taking liberties that were never telegraphed by whoever the woman was, then he will deserve whatever vilification comes his way."
We'll get to see it from tomorrow as 'Borat Subsequent Moviefilm' is out on Amazon Prime. Magnificent publicities!

Well this is a weird turnup.

Trump's personal lawyer/scumbag Rudy Giuliani has to defend his actions after appearing to fondle himself when he is caught in a sting in filming for Borat sequel.

"Just tucking in his shirt" 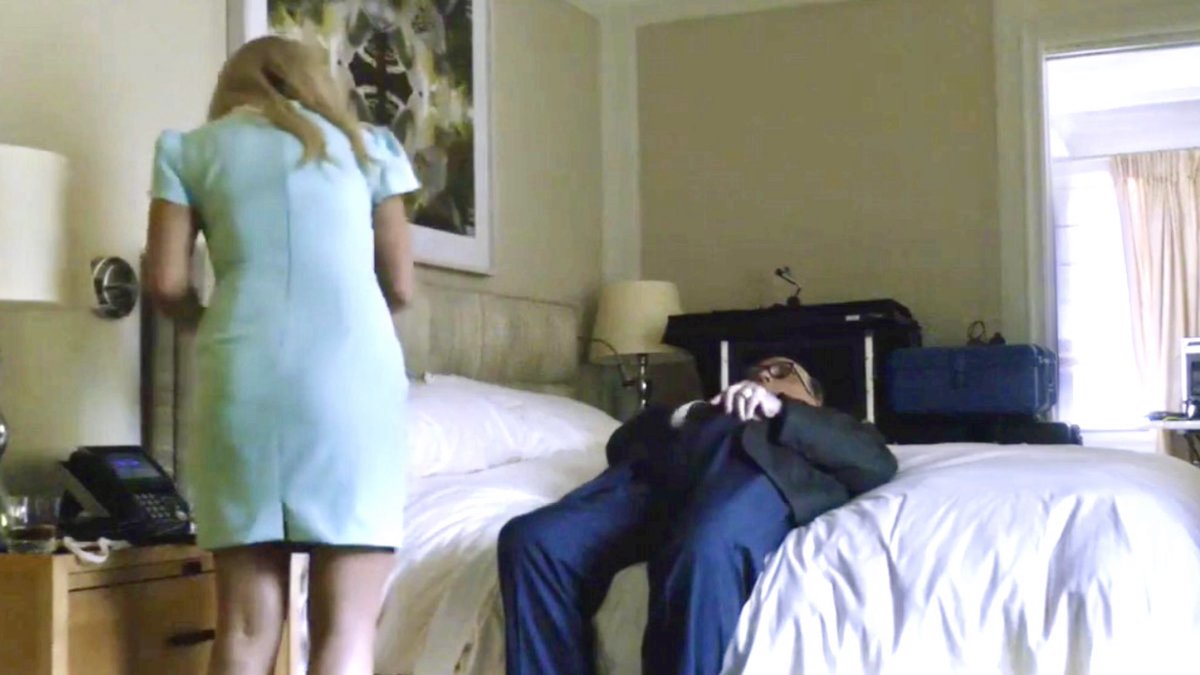 RE: [VIDEO] The Owners

Quote:
bandicoot says...
" can see the PMs reasoning for not wanting a national lockdown again, as it messes up the economy, loses jobs, and as he said that could end up, off and on, like a yo-yo, till the covid situation is solved, most likely by a working vaccine. So a national lockdown ain't going to happen, due to cost. (famous last words by me :D)."
I'm going to keep repeating this way past the point where people are sick of me saying it: there isn't a toss-up between supressing the virus or saving the economy.

If you don't control the virus by, for instance, not having a lockdown and leaving the nation to work on as usual, the economy will still implode because of the number of sick and dying will skyrocket and the remaining healthy population will automatically limit their economic activity by not buying s***, selling s***, going out, filling restaurants etc. out of fear of the now unchecked pandemic.

Saving the economy relies on aggressively supressing the virus to the point where a working (i.e. not what we have) track and trace system can attempt to eradicate it. We really should have had a zero covid approach like NZ, but that's so hard to do now because we didn't act quickly enough.

I don't know whether we should have national lockdowns, local lockdowns or whatever - that's for the experts to decide. But either way, the govt. should be fully financially supporting those affected by locking down and not penny pinching. Firstly because we CAN afford to do it (read up on the countless economists who say spending/borrowing will not risk the financial armageddon many assume) and secondly because it absolutely makes economic sense. Do we actually save anything by having 1m people on unemployment benefit as opposed to furlough?

Yes the govt have coughed up a lot of dough, but they need to keep doing it and being more generous because ultimately we'll emerge from this crisis a lot healthier than if we don't.

One for the mask-debaters (well worth a two minute watch)

Quote:
Snaps says...
"With the new tier 3 lockdown I'm heading in that direction.
Getting a bit more reading and learning in as an alternative to just staring through the windscreen."
Covid rate is still relatively low here, but it really wouldn't affect my work that much because it's pretty much all online these days. It's more that people are keeping their hands in their pockets because they're worried about the future (at least for the fairly expensive stuff we make). October to December is normally my mad busy time of year, but it's virtually dead. It was similar last year due to brexit fears, now we've got both.

Quote:
bandicoot says...
"So I looked up the internet and found the 'keyboard and mouse' and bought another two sets, one for the winXP in my site hut, and one for my win7 in my house. So all computers now have shinny new keyboard, nice. I can see what I am doing now :D"
I've been through a few wireless keyboards/mice in the last few years, I suppose I'm a fairly heavy user. Super cheap budget versions are not for me though.

I can tell you that there are a hell of a lot of 'poor' people round here who have horses along with the wealthy owners, including a lot of gypsies, and it's those people abandoning the horses. The wealthy owners are fine.

In the field next to our old workshop there was a herd of Shetland ponies whose gypsy owner died. They would have been abandoned were it not for someone else coming forward to look after them.

Quote:
Snaps says...
"Why the hell hadn't I done it long ago. Until you use a decent keyboard you don't realise what a pile of junk you've been pounding at for the last 2 or 3 years."
I'm using a crappy old wired keyboard atm after my wireless went tits up a while back. Same problem as some keys just don't work anymore... that's the no. two key     , and that's the speech key   . Trouble is I've just bought a nice twenty 7 inch monitor (try typing that without the two and the speech marks) and I've got hardly any work so a new keyboard will have to wait for a bit.

All I see is a desperate, orchestrated attempt to re-float the sinking plague-ship of Trumps campaign. I notice tonight that twitter has been astro-turfed with crookedjoebiden hashtag with loads of bots tweeting fake stories about him.

That twitter account belongs to a One America News anchor - a 'news' station that is voraciously pro-Trump and one that makes Fox News look like Reuters.

Sorry, am I missing something here?

Trump has a big, new influential supporter in his election bid: the Taliban.

Quote:
"We hope he will win the election and wind up U.S. military presence in Afghanistan."

In 2019, President Trump disclosed that he had invited the Taliban for peace talks at Camp David — days before the anniversary of the 9/11 terrorist attacks. He said he canceled the plans after the Taliban killed a U.S. soldier.

A senior Taliban member told CBS News, "Trump might be ridiculous for the rest of the world, but he is sane and wise man for the Taliban."
What a great coup for Trump. I'm sure Americans will be over the moon about this.

Quote:
Jitendar Canth says...
"What happened with the Govt, Test and Trace Excel spreadsheet cockup"
To be fair they only had a £10 billion budget, have you seen the cost of Excel these days? It's like a yearly subscription now. At least it wasn't Google Sheets.

Quote:
mbilko says...
"I have a possibility of a job on Guernsey, when I arrive I will be tested then isolated until the test comes back"
My neighbours' son lives on Guernsey, I believe they are covid free there.

I would turn off my router at night but then I wouldn't get my instructions while I sleep.

RE: Lefty Do good lawyers

Yes, as Johnson and his government of None of the Talents are failing miserably in the real world, he relies on invoking his culture-war army to fight the imaginary war against, well, anything that might be a barrier to whatever it is he's trying to achieve (any ideas anyone?).

Attack the media, attack the deliberately underfunded judiciary and set 'the will of the people' on them to give yourself fake legitimacy. Every despotic regime in history has done exactly this.

Quote:
Robee J Shepherd says...
"First 30 seconds... Truman Show rip off... then... omg this looks so much fun!"
Yes, and now we've pretty much seen the whole film in the trailer as usual.

Still, his legions of fans love him. Just look at all the tributes they're leaving him. Hmmm...

Walcott is about 31 now I believe? Amazing how the time goes. Remember when he was about 17 and he genuinely bought his girlfriend a ring from Argos after joining Arsenal.

Don't get too upset about his motorcade bullshit, it's just a dry run for his funeral.

Quote:
Snaps says...
"Do they have a pool boy?"
Not anymore

Republicans dropping like flies with cv-19. Such a shame. Its almost like it's not actually a hoax.

I watched the first few minutes. You'd have thought Biden would be able to wipe the floor with Trump and his appalling record, but he's just not that great. It just quickly became a shouting match.

Biden, I'm afraid, is really not a great candidate. His only real ace in the hole is that he's not Trump.

Quote:
Snaps says...
"I predict a dacha in Russia including a long drive in the steppes, one way."
Trump has been to Russia many times, stayed in many hotels. There's no way he hasn't been compromised. They bug every room and video everything. How many 'situations' have been engineered so they've got material on him?

The Ruskies wouldn't threaten him directly, they simply don't need to, but he must know that they've got a lot of intel they could drop on him and he's wary. He NEVER criticises Putin.

Quote:
Snaps says...
"Also I don't think it would be to Biden's advantage to push it that far if he ends up as president.
"
I don't think Biden - were he to win the Presidency or not - would have anything to do with this, probably no-one from the political front line really. He's got plenty of other enemies. Apparently his vast Russian loans need paying back so he has to keep his 'backers' happy.