It’s been a long time since I clicked on a blind-buy; I usually do some research, or watch a film or TV series by other means beforehand, but a distinct shortage of Yuen Biao movies in my collection opened my wallet. I have several films with the three dragons, Jackie Chan, Sammo Hung, and Yuen Biao starring together, and that has subsequently prompted me to seek out their other films. But while Jackie Chan, and lately Sammo Hung movies on Blu-ray have been plentiful, the same can’t be said for Yuen Biao movies. So when 88 Films put On the Run up for pre-order, I didn’t hesitate. The same is true for Righting Wrongs and the forthcoming Iceman Cometh (although I have seen the latter before on DVD). I’m slowly filling that gap in my kung-fu collection, although Yuen Biao was never as prolific in cinema as his ‘brothers’. 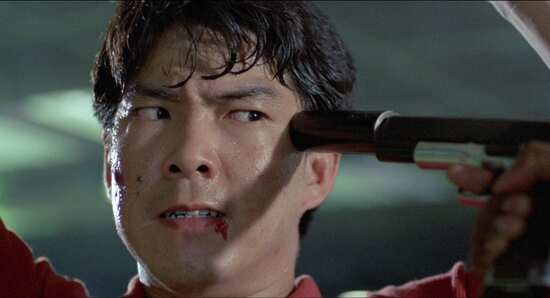 There may be law in Hong Kong, but there doesn’t seem to be any justice. That’s certainly the realisation that public prosecutor Ha Ling-Ching comes to when the primary witness in the case he’s working, and his family are brutally murdered before the trial is even over. That’s enough for Ha to take the law into his own hands. But even when a crime boss turns up murdered, the Hong Kong police have to investigate. And Sze Lai Yee’s investigation leads her straight to prosecutor Ha’s door. And while they are playing cat and mouse, crime continues to run rampant in a Hong Kong where the lawyers turn executioners, and where the cops are dirtiest of all.

Righting Wrongs comes on two discs, with more than one version of the film to enjoy. 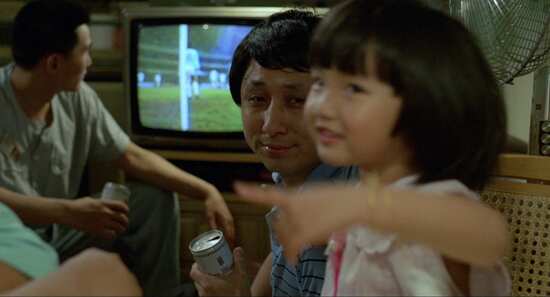 On the first disc, the film is presented in 1.85:1 widescreen 1080p ratio, and you get the option of DTS-HD MA 5.1 Surround English dub, and PCM 2.0 Cantonese in Theatrical Mix, Home Video Mix, and Japanese Mix with end narration. There are English subtitle streams for each of the Cantonese versions, and an English HOH track for the English audio. For my viewing I went with the Home Video mix. 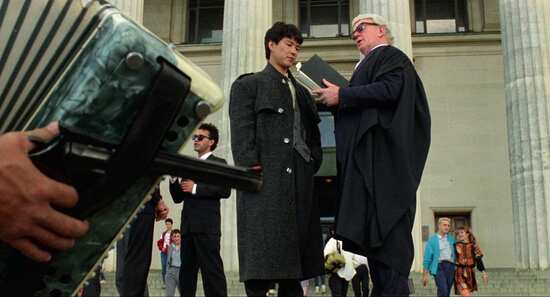 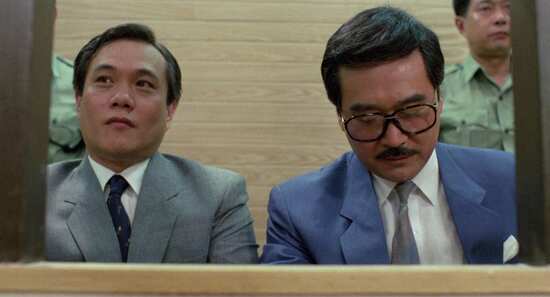 The image is sourced from a 2k restoration, and it comes up a treat on this release. It is clear and sharp, with rich consistent colours, bringing across some eighties’ fashions to... excellent effect? The print is stable, has an organic level of grain, and excellent detail, all realising some nutty stunts, and adrenaline fuelled action sequences at the height of Golden Harvest’s powers. The audio is fine, the dialogue clear and audible, the synth heavy music soundtrack making its presence felt without distortion or tinniness. The subtitles are accurately timed and free of typos. 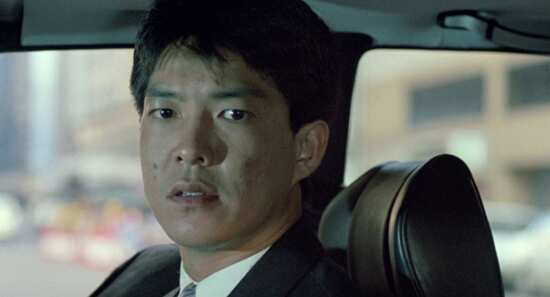 You get two discs in an Amaray style case with one on a centrally hinged panel. The sleeve too is reversible. You’ll also find six lobby card replicas in the disc case. It comes in a thick card artbox along with some more physical extras. It seems 88 Films have taken complaints about the On The Run artbox on board, and have eliminated the blurb and ratings logos from the artbox, relegating it to a separate card blurb sheet that can be stored in the case once the cellophane is removed. Thus the artbox is solely devoted to movie art, just as it should be. 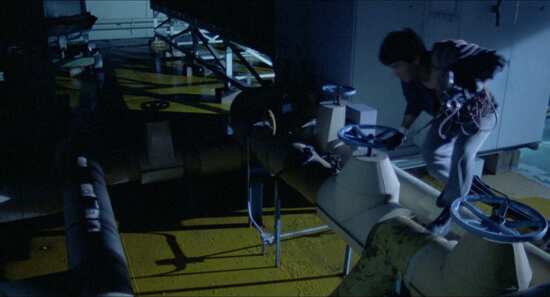 Also in the artbox is the reversible, foldout poster that repeats the two sleeve artworks.

Then there is the 80-page booklet with an essay on the film, as well as a text interview with actress Karen Sheperd by writer Mathew Edwards. This is complemented by production and promotional imagery, as well as stills from the film. 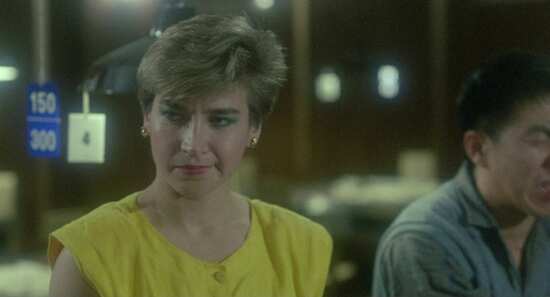 Disc 1 has the following extras...

Other than the Cynthia Rothrock commentary, these are all new extras for this release. The following are vintage featurettes from prior DVD releases. 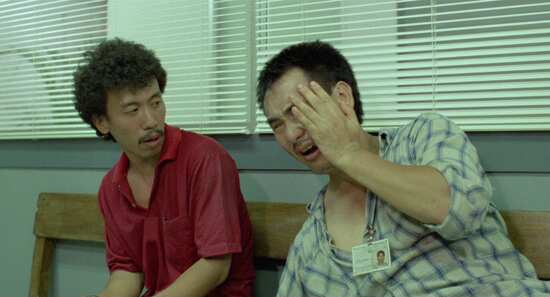 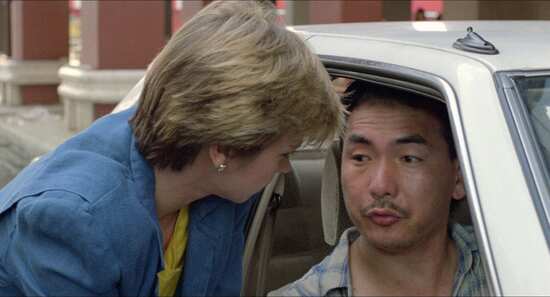 Disc 2 has the multiple versions of the film.

This also has a commentary from Mike Leeder & Arne Venema 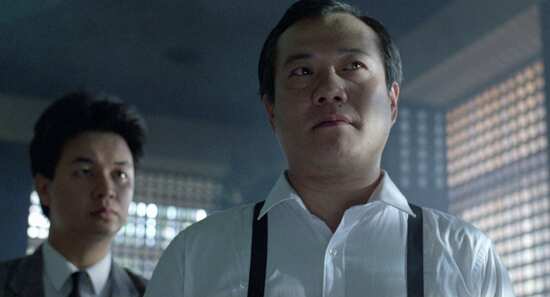 The Ultimate Cut combines the Hong Kong version with the Singapore Cut to deliver as many of the scenes as possible for a “complete” version of the film, with Mandarin audio where Cantonese wasn’t available. You can play it with a randomised ending, or you can select the ending you want from the menu, depending on who survives to the end credits. 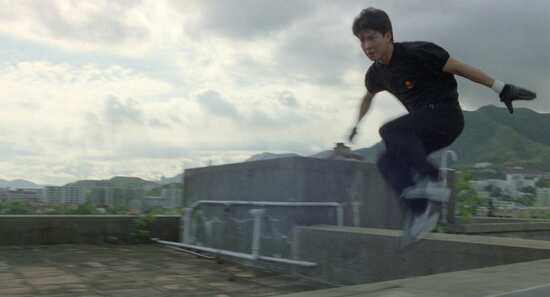 I feel sorry for the Hong Kong entertainment industry right now. China got tired with the whole “one country, two systems” deal that they did when Hong Kong got transferred back to China, and rather than wait fifty years, they’ve gone full on re-integration. That means anything that challenges the Beijing status quo, promotes independence of thought or threatens authority, is out the door. That’s going to have Chinese censors going through fifty odd years of Hong Kong entertainment, sifting out anything that doesn’t conform. You can bet that a film like Righting Wrongs, with lawyers turned vigilantes, dirty cops, and corruption of justice isn’t going to get a lot of air time in Hong Kong. It won’t be long before films like this are considered contraband. So companies like 88 Films are performing an essential service, making sure films like this remain out there for fans to appreciate, outside of China at any rate. 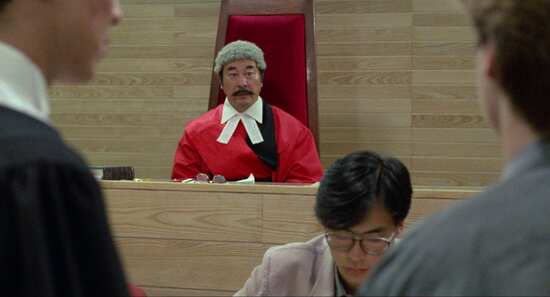 Righting Wrongs presents a Hong Kong justice system that is fundamentally broken, a cynical view of the world that informs the whole film. Just like a Bond movie, it begins with a mini-story that establishes the character of Ha, who while in the UK (doubled for by New Zealand) is there when his mentor is murdered in a drive-by shooting, and his first instinct is to pursue the assassins, choosing to execute them rather than detain them for the authorities. So it’s understandable later that he turns on a crime boss when the witness against him is murdered. Both he and the judge recognise the failings in the system, and their subsequent conversation about vigilante justice is only half tongue in cheek. Unleashing his considerable kung-fu on criminals, he becomes a veritable martial arts Batman, but there are still honourable cops in the city, and criminals kill criminals too. 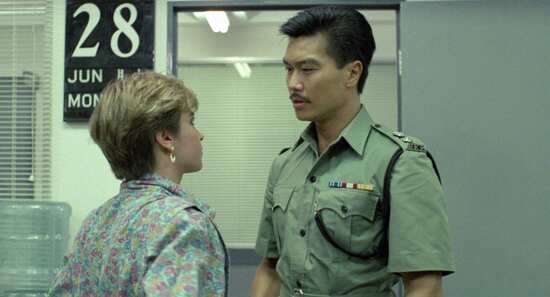 So we are introduced to policewoman Sze Lai Yee who is investigating the murder, and who quickly finds evidence implicating Prosecutor Ha. It doesn’t help when he shows up at another potential target to find a bloodbath caused by another criminal, and he gets implicated in the deaths when Yee shows up hot on his heels. She’s a resolute, hard-hitting cop who stands for no nonsense and is determined to crack her cases. The problem is that this particular case leads back to a dirty cop named Wong, who just happens to be her boss. It doesn’t end well, at least not in this version. 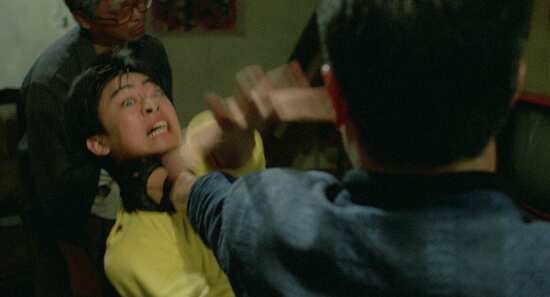 Then I watched the Singapore Cut, and I found it a more satisfying watch. We’re not talking any major differences, but there is enough that is altered to make watching both HK and Singapore versions worthwhile. This version of the film has more in the way of character moments, developing them better, which ultimately makes the characters’ motivations more empathetic. The ending too is different, not quite as downbeat, although still conforming to that respect for authority that often downplays individual choice in film of this nature. Still, this will be my go to version of the film, the next time I watch it. 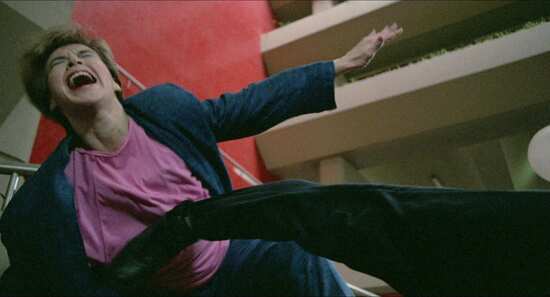 Righting Wrongs is a great action movie. The fight scenes are frenetic, and wonderfully choreographed, while the stunts are truly insane. If it does have an issue, it’s with the film’s tone. The story is dark, the violence can be brutal, and there is a cynical view of authority that demands a serious treatment. And that has to be balanced with the film’s humour, which can be wacky, and even goofy at times, indulging in the word-play and even slapstick that you’d expect in lighter fare from Jackie Chan and even Sammo Hung. Yee’s slobby partner is a case in point, whose byplay with his uniform cop father is solely played for laughs. Tragicomedy is a thing, but the occasionally goofy antics of the characters in such a cynical and dark world don’t really work well. It is still a hell of an action movie, with some of the best fight sequences ever put to celluloid. I still can’t believe that there are effectively 7 versions of the film in this one release. I thought the Blade Runner Ultimate boxset was the gift that kept on giving, but Righting Wrongs puts that into the shade.