It's that time of year again, when the major games publishers try to convince us that we want their new lootbox-infested live service mobile apps with day 1 DLC.

Doom Eternal
Cyberpunk 2077
Dying Light 2
Star Wars: Jedi Fallen Order (although it's EA, so probably terrible)
Splinter Cell - will it finally happen this year? Did Ubisoft figure out how to jam microtransactions into it?
Command & Conquer / Red Alert remasters
Back 4 Blood - the new L4D-style game from the original L4D devs.

Would really like a Prey sequel as well, but I don't think it was profitable enough to warrant another one.

Here is the conference schedule: 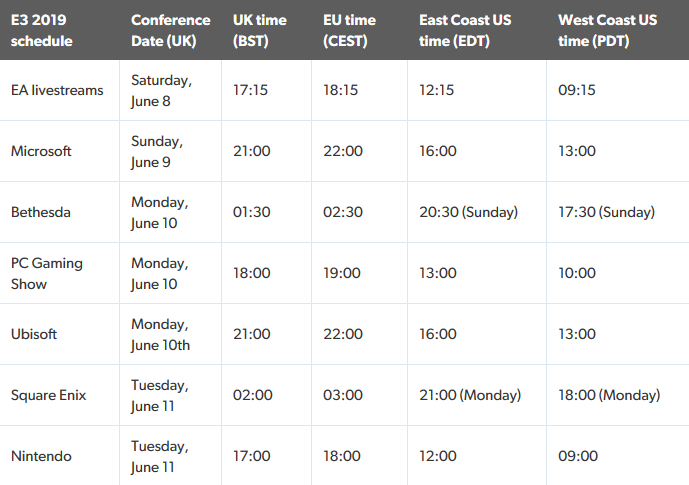 Conferences will be streamed live at the respective Twitch channels:

The PC Gaming Show is sponsored by Epic Games this year. No doubt it will be a rollercoaster of emotions: "Wow, that game looks cool... oh, it's another Epic Fail Store exclusive title...". I think I will cry if Desperados 3 is revealed to be an Epic exclusive.

No Sony show this year but they are expected to return in 2020 to show off the PlayStation 5.

Look a bit Witcher 3 in space, so that may well be enough for me...

Some highlights from the Microsoft briefing:

Halo Infinite - launching with the next XBox in late 2020

Crossfire X - still not really sure wtf this is


Bethesda conference coming up in a few hours.

Ghostwire: Tokyo - this one has my attention

What on earth is that Ghostwire one all about?

Microsoft Flight Simulator??? Wow I thought that series was never going to get any more love.

Quote:
Si Wooldridge says...
"What on earth is that Ghostwire one all about?"
I think it was described as a supernatural action adventure. This was a first look, so the details are scant. It will probably feature much more heavily at next year's show.


Remnant: From The Ashes

Not much of interest to me, tbh.


Ubisoft conference in an hour.

Got bored and calling it a night with the Division mobile game though, I'll catch up in the morning to see if anything else interesting comes out, but E3 just feels pants overall...

Ubisoft show had more gameplay than most, but the games are...

Ghost Recon: Breakpoint - more of the same as Wildlands, Ghost Recon in name only

No Splinter Cell again. No way to turn this property into a live-service turd like their other games, I guess.