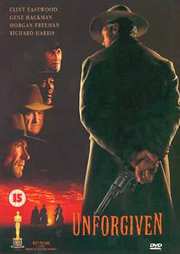 Synopsis:
Clint Eastwood`s film Unforgiven is an exciting modern classic that rode off with four 1992 Academy Awards (r), including Best Picture and Director.

"The movie summarised everything I feel about a Western." Eastwood told the Los Angeles Times. "The morale is the concern with gun play".

Eastwood and Morgan Freeman play retired, down-on-their-luck outlaws who pick up their guns one last time to collect a bounty offered by the vengeful prostitutes of the remote Wyoming town of Big Whiskey. 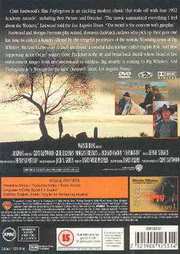 Back Cover of Unforgiven

Excuse me? Four Oscars? For what???
I had big expectations from this movie but most of them were shattered.
I don`t like westerners. Not at all. But this is not a westerner. Far from it.
It`s supposed to be an anti-western movie, but I found it way way too slow.
OK, OK, so the sound is cool and the sceneries are beautiful. But what about the story? A total disaster in my humble opinion.
The 1.85:1 transfer is OK. I did manage to catch a pixelazation mark here and there, but nothing major.
The DD 5.1 soundtrack is cool. Well, I was hoping for a bit more action in the gun shooting scenes, but got just a couple of shots (which sounded great, but they were too scarce).
Will I watch it again? Well, maybe. At a gunpoint.
posted by Zvi Josef on 23/7/2000 04:30
7 / 10

A counterpoint to the western genre is all you can describe this film as. It reveals perhaps a far more realistic vision of life in this most hostile of environments and times. it is not a gun blasting, rip roaring action film. No, instead, this is a film about the tragedy that strikes each time someone fires a gun. The deaths seen here are not glorious, or showy... they are an example of the horrible nature of death, and each victim dies in a pathetic manner (one is sat on the crapper for gawds sake)

And most important of all, this film looks at the results of killing not only on the victim, but on the killers themselves. Eastwood, in the ultimate coda to his fame as iconic gunslinger, here plays a reformed killer who struggles with his violent past. It is inevitable however, that he WILL snap, and when he does it is not a glorious action packed shootout that awaits us. Instead, it is a cold blooded mass assassination.

Video wise, its an OK print... nothing spectacular, and a bit grainy and soft on occasion. The surrounds hardly get a work out at all, but when they are used its an excellent, rich sound. And there are no features worth mentioning, so never mind....

Grim and dour, and with a scarcity of standard Western thrills, Unforgiven relies on a rich set of nicely-observed characters to set it apart. The story has an instant hook that keeps interest high: who will take up the whores` offer of gold for blood? The fun is in watching the four or five topnotch character performances that place law `n order in the old West in a fairly fresh perspective.

The central action of the film is a hateful, unpunished (but profitably fined) crime by two cowboys against a helpless prostitute, that turns into a disproportionate offer of blood money for their murder.Unforgiven takes more steps to make sure there`s nothing noble in hatred. Led by their bitter madame (Frances Fisher), the prostitutes don`t even forgive the slasher`s partner, even though he`s innocent, and tries to make amends later as best he can.

One important thing to praise about Unforgiven is Eastwood`s direction, which is head-and-shoulders above most of the rest of his work. Evidently the director was impressed enough by the script to shoot it with uncommon care, because the choice of angles and the visual design here is a great improvement. It really is a fine Western to watch. One morning scene finds snow on the ground, and we feel the chill in the open country. The action scenes are exceptionally well thought out - it`s a real movie, not just another self-propelled Eastwood vehicle.

Warners has given Unforgiven a deluxe two-disc DVD treatment, which mainly means that the lengthy, finely-detailed film finally gets the class-A transfer and encoding it deserves. The brown-on-brown, often dark-toned film always looks great, and the sound is as commanding as ever.
The extras are so extensive, there`s something for everyone. Previously interview-allergic Clint Eastwood is all over the place here, in old featurettes and new ones, on camera discussing his career and this show specifically.

The extra that I really appreciate is an entire Maverick episode where a young (1959) Eastwood plays a charming but cowardly gunfighter with an itch to blast holes in James Garner. Garner makes a ninny out of him, of course, but Eastwood`s potential as a lean, mean mobile ordinance platform gets a good workout - and is much more compelling than his jokey Rowdy Yates character in Rawhide. All in all, a terrific package for Eastwood fans.

Many call this Eastwood`s best movie and while I`m more of a "Dirty Harry" fan, I can honestly say that this is one of the better films I`ve seen. The pacing is slow and if you`re looking for an action movie, this has it, but in a different form. Showing his age, Eastwood seems to have it all together here. While Unforgiven may just be a tale of revenge, it does show what storytelling and a great script will do for a movie. Cited as one of the Top 100 greatest movies ever made (#98) by the American Film Institute, Unforgiven is a throwback to the great Westerns that Eastwood himself helped make popular. This is not to be missed and the new DVD renders the old version obsolete.
posted by Aslan on 10/10/2002 05:58
6 / 10

As a big clint eastwood fan, this was a little dissapointing.
Westerns dont typically have to have a lot of gunplay and its true to say that their is little gunplay in this movie. It is in fact a western-drama. The movie focuses on some tough issues about justice and the morality of killing and it presents good ideologies. During that time, I guess justice was harsh and that is what this movie portrays.

Basically Clint, Morgan and this other guy go to kill 2 guys because one of them attacked a prostitute, leaving her with severe scars. Yes it is harsh indeed but the whores put up the bounty and clint is intent on collecting it. He used to be a savage killer but his wife (who died of smallpox) reformed him into a decent human being.

Gene Hackman plays a cruel and brutal sherrif intent on stopping these 3 men from killing the other 2 men. I think this movie tries to show people what it was like during the time. People were killed for no apparent reason at all. I do not know if its an accurate portrayal and though it does seem a bit farfetched, the acting is very believable.

Picture quality is not that great. Fair enough the picture is old but its not that old. I have seen far better transfers than this. There is too much grain and not enough colours and sharpness. The disc i`m reviewing has been re-released so hopefully it has a better transfer. The sound also is lacklustre but seemingly ok.

There are only some cast bios and some production notes as extras which is poor but like i said, It has been re released into a 2 disc set with more extras.

A good movie about the justice and killing in the time of the old west. Though I dont think it deserved all them oscars, It certainly is a good movie. I would recommend renting this movie.
posted by dicanio on 4/3/2003 15:51