No Blood No Tears 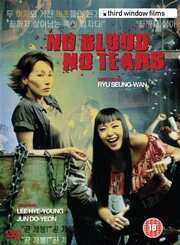 Synopsis:
“No Blood No Tears is the film that Guy Ritchie needs to sit down and watch … runs rings around anything that Hollywood has tried to produce in a similar vein in the last ten years” (Londonist.com). In his first major studio film, director Ryu Seung-wan brings us a taut heist thriller with full-on action, skillful editing and characters that really pack a punch.

Gyung-sun is a washed-up cab driver who has been trying to go straight after years in trouble with the law after being a big-time safecracker. Soo-jin wants to be a famous singer, but lives the life of a trophy girlfriend to her vicious gangster boyfriend. An unlikely situation cause these two different women to meet where they plan a daring solution to both their problems that will escalate and threaten the wrath of many powerful and corrupt people around them.