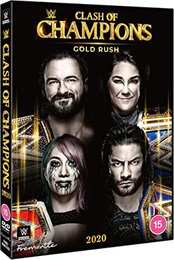 Synopsis:
Gold will be on the line in every match at WWE Clash of Champions: Gold Rush with NINE massive title showdowns in store.

In an amazing ladder match, Jeff Hardy puts his Intercontinental Championship on the line against AJ Styles and Sami Zayn.

Drew McIntyre tries to end the feud with Randy Orton over his WWE Championship in a hellacious Ambulance match in which they will both be needing one at the end.

The head of the table will be fought for with Roman Reigns taking on his cousin Jey Uso over the Universal Championship.

Who will leave tonight with the gold?