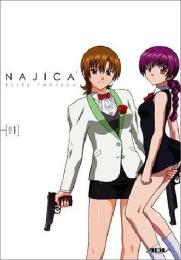 Synopsis:
Following a devastating series of earthquakes, a fifth of the Earth's surface is submerged under water. Najica Hiiragi (perfumier by day, secret agent by night), uses her uncanny ability to recognize and classify over 500 different smells to build her cosmetic empire and fight the world's criminal element in her spare time!

Forced to take on a partner, leggy loner Najica is paired with Lila, an android 'Humaritt' whose childlike naivete belies her awesome artificially created instincts. Quite why she has to take this lovable killing machine under her wing and, in fact, Lila's ultimate fate is for Hiiragi to find out!

James Bond just can't compare to the girls of Najica Blitz Tactics! Plenty of fan service ensures that whether on land, sea or air these girls are showing all their best attributes in their constant battle against international crime...