It will probably bore the average anime fan, but I’m interested by the phases of anime production and distribution. The big changes in production involve going from cel and paint, to digipaint, and then from SD to HD resolutions. In terms of distribution, things are a little more complicated in the UK than just VHS to DVD to Blu-ray. Those early DVDs were just VHS masters transferred onto disc, before a long period of NTSC-PAL standards conversions. Then there were the native PAL sped-up transfers that preceded the Blu-ray boom. We’ve pretty much gone exclusively Blu-ray at this point, but there was a thin slice of time where Australian and UK markets still demanded DVDs alongside the Blu-rays, but there were no US DVDs to source transfers from. That led to companies in the UK and Australia authoring their own DVDs, and those titles, just a handful really, got disappointing DVD releases. GATE was one of these titles released in 2018, and just like the similarly home-authored Flip Flappers, it was a title that I was compelled to double-dip to Blu-ray. It’s taken me a while to get around to re-watching it though. 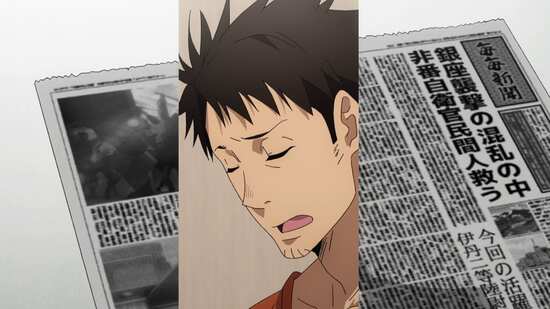 It was just supposed to be a fun trip to Ginza, a chance for Yoji Itami to pursue his otaku interests with abandon. But then a large gate suddenly appeared in the city, and a host of roman looking soldiers on horseback, beastmen, and dragons burst forth to attack and kill all that moved. Fortunately Yoji is enough of an otaku to know his fantasy tropes. Even more fortunately, he’s also a serving member of the JSDF, and steps up to the plate to help safeguard the civilians and get them to a sanctuary, long enough for the military to organise a counterattack. 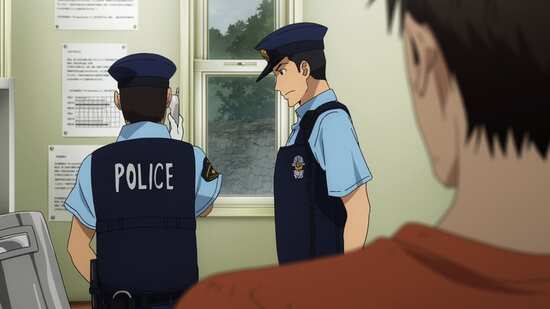 That’s how Yoji ends up as a hero of the nation, and part of the expeditionary force ordered to venture through the gate, to ascertain the nature of the world on the other side, to find and negotiate with any foreign power there, to make peace and reparation if possible. But there’s a whole lot of politics going on in the background. On the other side of the gate, Emperor Molto sees the superior armed forces of the JSDF as an opportunity to divest himself of political foes, while here, a resource hungry, overpopulated world sees the gate as a doorway to growth, and whoever controls the gate, holds the future in their hands. Suddenly it looks like Japan standing alone against the rest of the world. And Yoji Itami has to walk this tightrope, with only his military training and otaku proclivities to guide him. 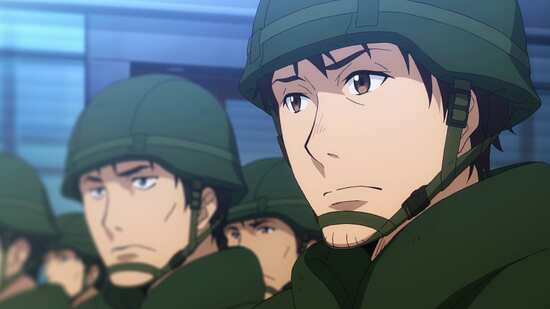 The 24 episodes of GATE are presented across three Blu-ray discs from MVM.

Disc 1
1. JSDF Goes to Another World
2. Two Forces
3. A Flame Dragon
4. To the Land of the Unknown
5. Battle of Italica
6. Ride of the Battle Goddess
7. Princess’ Decision
8. Japan, the Other Side of the Gate
9. Night Battle on Hakone Mountain 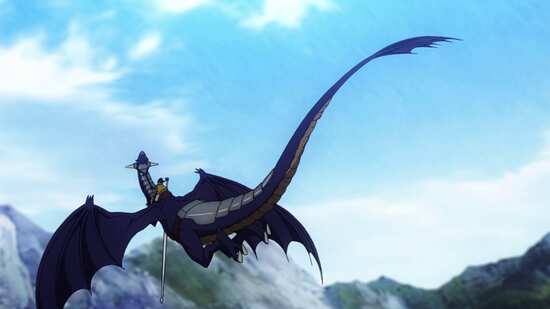 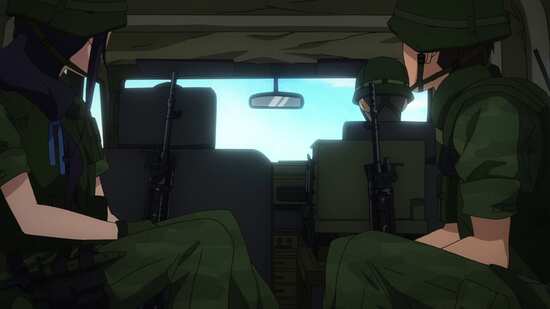 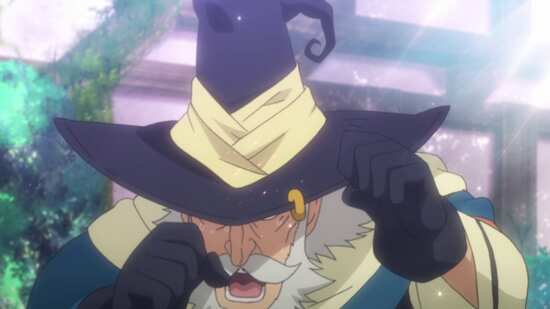 On the Blu-ray, GATE gets a 1.78:1 widescreen 1080p transfer, and this is what the show deserved, not the mess that was on the DVDs. The image is clear and sharp, colours are rich and consistent, and the animation comes across without issue. There’s no visible compression or aliasing, and banding is minimal. That’s all to the good, as GATE is a visually impressive and action packed show, the expected collision of generic RPG fantasy with the detail that comes from military otaku production designers. The character designs are memorable if a little generic, and the world design is imaginative and detailed. GATE is a good looking show which is served well by the Blu-ray. 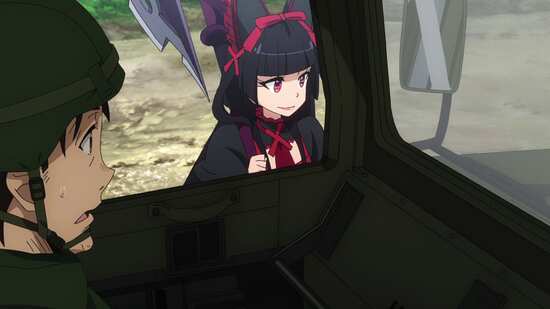 You have the choice between DTS-HD MA 2.0 Stereo English and Japanese with subtitles and signs locked to the appropriate track. The audio is fine. I went with the Japanese and was very happy with the actor choices. The music suits the story, and the action comes across well. I gave the dub a try and wasn’t immediately convinced to turn it off. The subtitles are timed accurately and are free of typos. 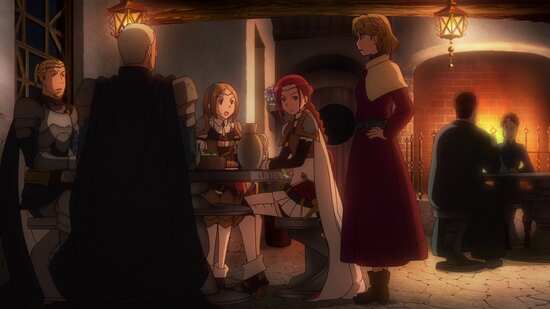 You get three discs in BD Amaray case, with two on a centrally hinged panel. There is some nice artwork on the inner sleeve. The discs present their content with static menus, and each episode is followed by a translated English credit scroll. The extras are on disc 3.

You get two textless openings, and two textless closings.
The Animated Comic comes in four parts and lasts 2:02.
There are 12:02 worth of Japanese Promos. 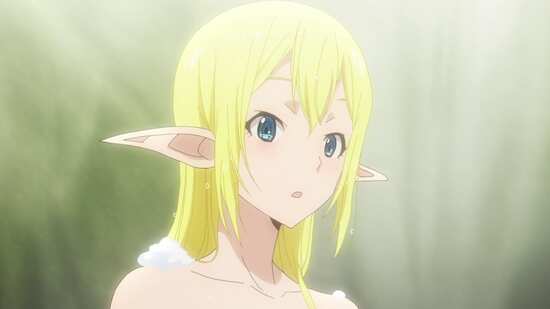 This is what I wrote last time about GATE, when I reviewed the DVD...

Quote:
There’s a Kirk Douglas movie called The Final Countdown, in which a US nuclear powered aircraft carrier from 1980 winds up back in the Pacific just before Pearl Harbour. They wind up having to choose between intercepting the Japanese attack and getting back to the future. I always wondered what would happen if they’d stayed in the past, and we got to see Zero fighters come-up against supersonic F-14 Tomcats. I don’t wonder that anymore, as it turns out that it would be pretty dull, if GATE is anything to go by. Here we get a modern military up against a pseudo-Roman Empire with magical and fantasy trappings, dragons and wizards and the like. It’s not much of a spoiler to say that they aren’t really challenged. And that is GATE’s biggest and most glaring weakness. 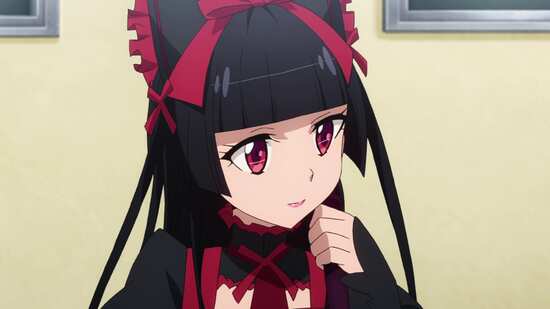 I really enjoyed the show at first, the whole clash of two worlds, the technology meets magic aspect to the set-up. Suddenly a portal appears in Tokyo, disgorging an army that wreaks havoc on unsuspecting shoppers and pedestrians, before the military is mobilised and contains the situation with deadly force. One of those pedestrians is Yoji Itami, an otaku who happens to be an off-duty soldier, and whose actions save several citizens. He’s not too well-pleased when he gets commended and promoted for his actions, as that cuts into his otaku time (he’s a man who works for his hobby), and he gets put on a mission back through the portal to show the flag in this parallel world, show that the JSDF isn’t to be messed with, and to pursue a peaceful resolution on Japan’s terms, in that order. 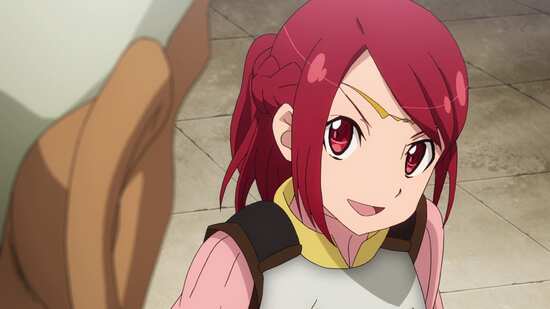 Fortunately his otaku sensibilities are sated when he learns of the magical nature of this parallel world, the panoply of races living there, including furry eared girls, and elves, and gothic Lolita demigods alongside the humans. This culture clash is the most fun you can have with the premise, and GATE milks it for all its worth all through the run. In tried and trusted style, Yoji winds up with a harem, consisting a magic user named Lelei, an elf named Tuka, a princess named Pina Co Lada (yes, really) and a delightfully sadistic demigod named Rory, and they all have plenty of interesting adventures together. 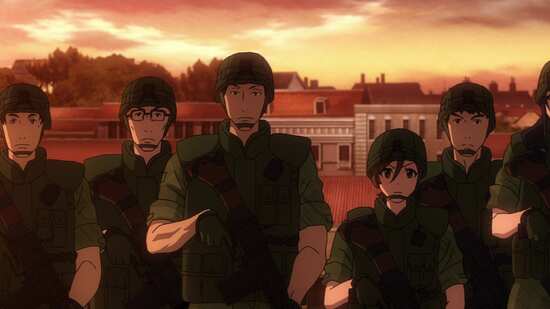 However, you can’t get away from the politics surrounding the show, and any wandering online around GATE will quickly bring up the suggestion that this is a 24 episode long propaganda piece for the JSDF, an expression of the recent notion in Japan that the nation needs to move away from its pacifist status following World War II and become a major world player again in terms of its defence forces. And it’s that aspect of Gate that renders it a rather dull and unfulfilling show. The JSDF can do no wrong here, they handle every challenge to them with ease, they’re always on the side of right, no matter the enemy body count left in their wake; JSDF soldiers don’t die in this show, they might take an arrow to the knee, but they don’t die, and they never ever lose. 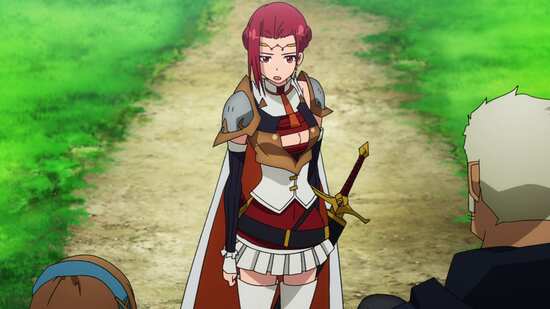 Foreign governments are wrong, the Japanese government is wrong, the Japanese people can be wrong, above all, foreign militaries are weak, inexperienced and ineffective compared to the might of the JSDF. And that’s before we get to the other side of the Gate, where the faux Roman army are cannon fodder, where fire breathing dragons plummet from the sky when hit by heat-seeking missiles, and so on and so forth. Then, when the JSDF hesitates because politics is getting in the way, or orders aren’t forthcoming on time, Yoji Itami is righter even than them, as he goes his own way, or disobeys orders to consistently succeed, and the JSDF wind up scrambling to give him post facto support, because they ‘never leave a man behind’. 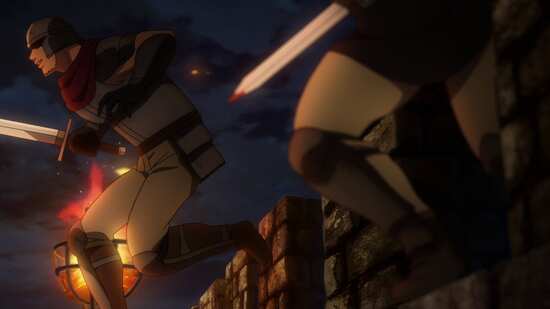 It’s so teeth-itchingly triumphant that it begins to annoy, and the end result is that there is absolutely no drama in the show when it comes to the main characters, the JSDF that you are supposed to invest in. Instead you wind up looking for drama from the people on the other side of the gate, and to its marginal credit, the show does at least make the internal politicking of the Empire interesting, and a little unpredictable. You can invest in the plight of the dark elves, or Lelei’s ambition to become a Sage in magical circles. 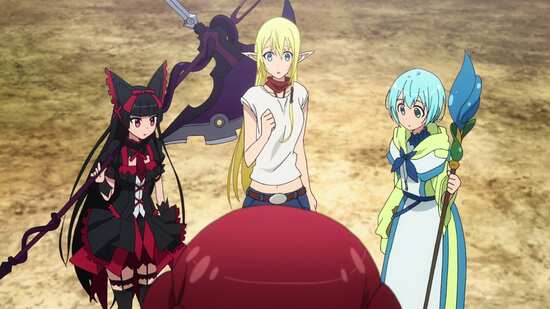 GATE could have been good; it could have been great if it had made the most of its premise. If the Empire had magical abilities to rival the technological strength of the JSDF, it would have been a) a fair fight, and b) interesting to see bullets matched against fireballs, tanks against shielding spells, and some badass dragons taking on F-16s. But in this series the JSDF are an army of Mary Sues, leaving all-powerful Emperors soiling their loincloths in terror. Thankfully the little picture, the side-stories and character arcs are interesting in GATE, as the big picture is as dull as dishwater. 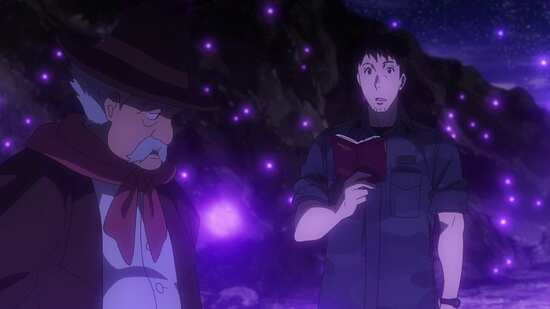 All of that is still true. But watching it on Blu-ray, with the technical presentation to do the production value justice makes it a far easier show to watch. It’s really well animated, with a lot of attention to detail, and the action sequences do work well. And knowing in advance what this show is, makes it easier to concentrate on the finer detail, the character arcs and interactions. You can put to one side the militaristic fanwank, and instead appreciate those aspects of the show which don’t make your teeth itch. Once I did that, it turns out that the character writing, and the pace of the show is really quite good. Moreover, GATE is ‘one-episode-more’ compelling, so much so that I was sitting down to watch four or five episodes at a go, where I normally manage just one or two. I hate to say this, but GATE is a guilty pleasure. It’s demonstrably bad, but it’s also deliciously entertaining. There’s something vicariously uplifting about seeing primitive militaries wasted by modern hardware. It reminds me of the Mboto Gorge speech from Blackadder Goes Forth, where he recounted facing “ten thousand Watutsi warriors armed to the teeth with kiwi fruit and dry guava halves". GATE, so bad it’s good.