I see the rule about buses also applies to home video as well. You wait for one kung-fu police procedural kung-fu action comedy, and two turn up together at the same time. I’m in the middle of watching the Righting Wrongs set, with its multiple versions of the film, and Eureka send the check disc for Yes, Madam! Both films are directed by Corey Yuen barely a year apart, and both star Cynthia Rothrock. 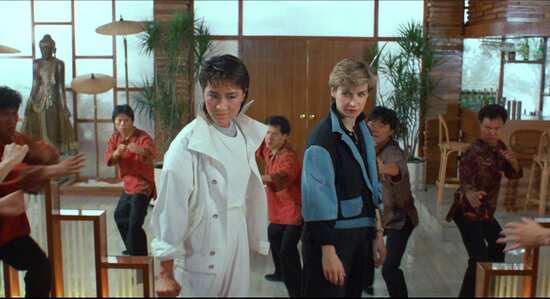 Yes! Madam is also one of the In The Line of Duty quartet of films, part of the female action renaissance that kicked off in Hong Kong Cinema in the mid-eighties. 88 Films are releasing all four as a collection in the US, but Eureka are being a little more circumspect in the UK, releasing them individually, and going for the two Michelle Yeoh films first, with this Yes, Madam! coming out this December, and Royal Warriors set for January 2023. 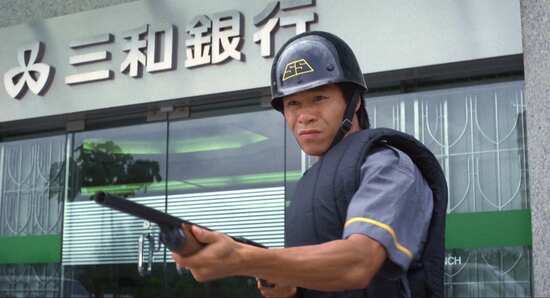 It helps to be versatile as a woman police officer, dealing with perverted flashers, armed robbers, and flirty colleagues. But Inspector Ng Lok-Sai is out of her depth when the friend from Scotland Yard she’s meant to meet is murdered in his hotel room. Then a couple of opportunistic thieves take his personal belongings. That’s opened a whole other can of worms. The assassin had killed him to get a certain microfilm, which the thieves inadvertently took, and which a crime boss wants back. Now both the police and the mob are after the petty criminals, and Scotland Yard have sent the volatile Carrie Norris to lead the investigation. 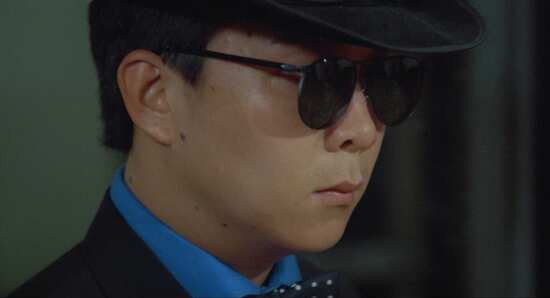 Yes, Madam! gets a 1.85:1 widescreen 1080p transfer from a 2k restoration. You have the choice between DTS-HD MA 5.1 Surround English dub, as well as PCM 2.0 Mono Cantonese Original Theatrical, and Home Video audio, with an optional English subtitle track. It’s another transfer to be happy with, clear and sharp, with rich consistent, eighties pastels, excellent detail and enough grain to look properly filmic. There’s no visible sign of compression, and the action all comes across well. The music has enough synth in it to be of its time, while the audio balance was good, the sound warm and effective in the Home Video Cantonese mix that I stuck with. The subtitles are accurately timed and are free of typos. 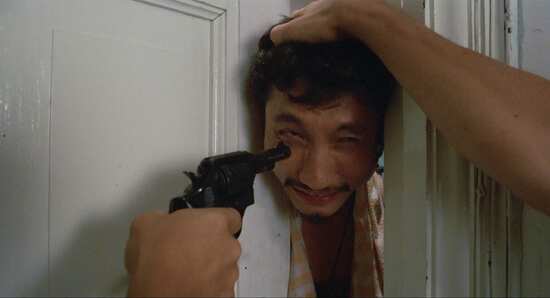 The first run release of Yes, Madam! will come with a 20 page booklet with writing on the film from James Oliver, interspersed with stills and promotional imagery from the film.

The disc boots to a static menu, with everything, audio and subtitle options and the following extras listed on just one page. 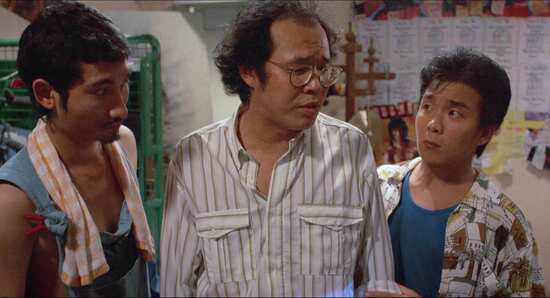 The Export Version of the film is here with a PCM 2.0 Mono English soundtrack, running to 87:33 and with a wholly different movie spliced into the beginning. 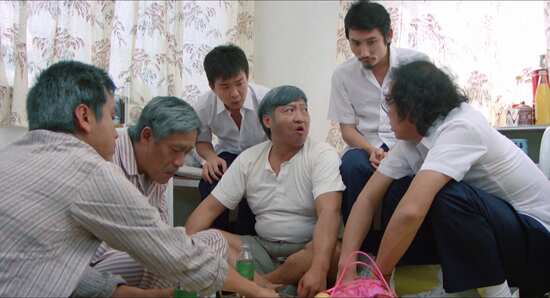 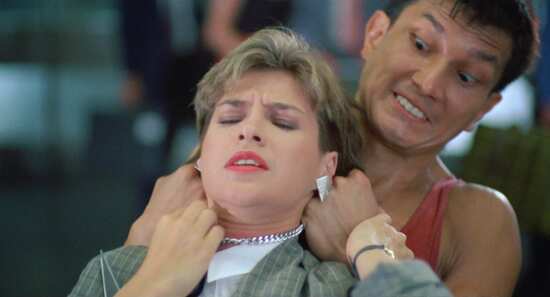 Yes, Madam! comes from that era of Hong Kong action movies where the action was more important than trivialities like narrative or character. You don’t really want to devote too much of your brain matter to the plot here, and if you do feel tempted, just listen to one of the commentaries instead, where they’ll point out the gaping plot holes with the glee that they deserve, rather than any real criticism. The most important thing is that Yes, Madam! entertains in just the way that you would hope, deftly blending action and comedy to stunning effect. 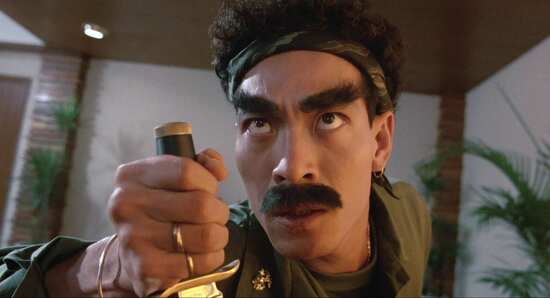 There are two protagonist threads to follow in the film, following the murder, and theft of the microfilm that sets the story into motion. The villains of the piece want that microfilm back, which puts the thieves that steal it in danger. They are a motley bunch, ‘brothers’ that apprentice to a ‘retired’ criminal who’s in an OAP home (a greyed up cameo from Sammo Hung), and for whose welfare they ‘work’. In the subtitles they get the pharmaceutical names of Panadol, Aspirin and Strepsils (localising the subtitle translation a little too much), with Strepsils and Aspirin the opportunistic thieves, and Panadol a forger (Tsui Hark taking off his director’s hat for a movie) who is happy to take the passport that they lifted along with the money. Panadol is a cheeky reprobate whose little forgeries and fakes aren’t always up to scratch. As a result, he’s reworked his apartment into a giant contraption to allow for an easy escape, and when that doesn’t work, he has Aspirin and Strepsils to help pull his fat out of the fire. The trio carry the burden of the comedy in the film. 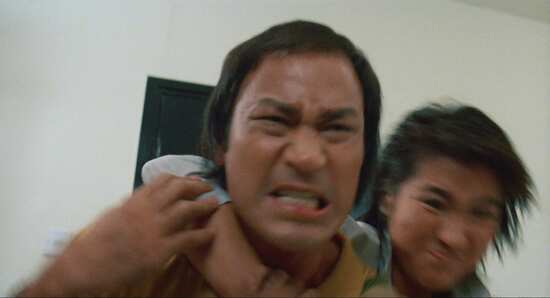 When Inspector Ng visits her friend to find his corpse, and a couple of suspicious hotel workers making a hasty exit, the investigation follows the petty thieves angle, while the actual assassin also pursues the thieves, looking to retrieve the microfilm. Inspector Ng is introduced in the theatrical version as versatile and talented, switching at the drop of a raincoat from dealing with a perverted flasher, to single-handedly taking down a gang of armed robbers. And she manages to navigate the minefield of working among the usual misogynist colleagues, including an overtly flirty police chief. She’s certainly motivated in finding the killers of her friend, especially when it turns out that the local, creepily jovial crime boss is implicated, and the elusive microfilm might be the one chance to take him down. 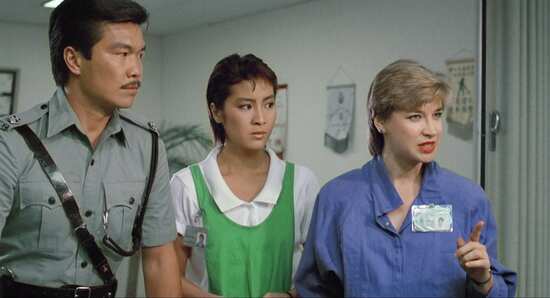 Things get complicated when a UK cop, Carrie Norris shows up to take the lead in the investigation, and at first, they rub each other the wrong way when it comes to their policing techniques, with Carrie more of an ass-kicking bad cop, and Ng a sneaking bad cop when it comes to interrogations. When the course of the investigation turns against them, with a crime boss antagonist who’s a little too well connected, they wind up teaming up together against the odds. 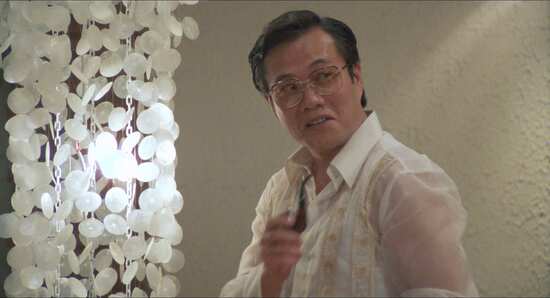 The humour can be goofy at times, and can also seem out of place with the film’s moments of brutal violence in that typical eighties Hong Kong action movie kind of way. But the action is stunning, hi octane and adrenaline fuelled fight sequences, featuring a who’s who of HK action movie talent. It’s the kind of stunts and action that you see on the Youtube show-reels that highlight martial arts action. And I have to say that seeing female talent carrying the burden of the kung-fu makes for a refreshing change to someone who’s more used to the male led movies. And as I’ve been noting more and more often of late, Yes, Madam! might just be another film that won’t be welcome in today’s Hong Kong, with a climax that reacts to an ineffectual and incompetent authority, where individuals take the law into their own hands. 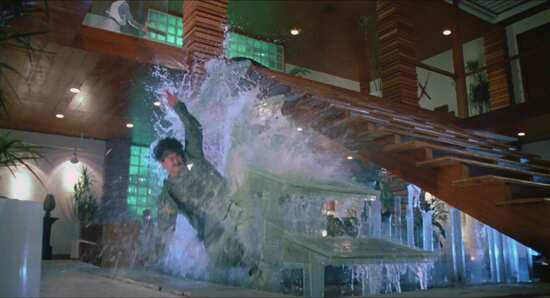 I’ll never get tired of saying it, although you might get tired of reading it over and over again, but Eureka Entertainment do a sterling job in sourcing great materials for a top-notch transfer, while the extra features make for a rich package. I’m already eager to see what will come next, when it comes to classic Hong Kong action.