There’s this sense to life that time speeds up as you get older. As children, the days seem endless, boredom infinite, and we’re impatient to get old enough to have real fun. But then education ends, work begins, responsibilities commence, and the routine of life is such that days fly by, and years all tend to blur into one. You want to get to that point if you’re collecting these movie spin-offs of popular anime series like Girls und Panzer, and this, Princess Principal. Sure, the creators can take their time to perfect the animation, and get the story right, but when you’re releasing successive instalments at an annual rate, say, effectively a single cour of material over five years, then time speeding up feels like a good idea, as long as you forget that it also means that your inevitable demise is racing towards you as well. Don’t say I’m never upbeat! 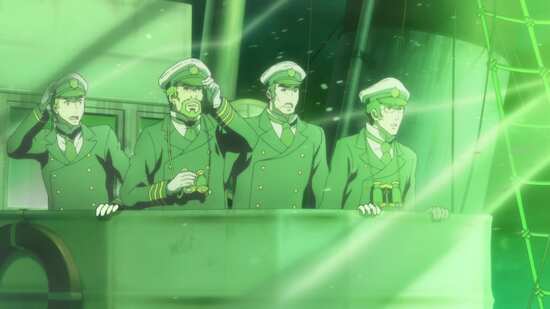 Princess Principal takes place in another history, a world where Albion developed technology based on the mineral Cavorite, an energy source that allows direct manipulation of gravity, and with its vast Air Fleet, it quickly established the largest empire the world had seen since the Romans. But by the end of the nineteenth century, revolution tore the empire asunder, and two states resulted, the Kingdom of Albion, and the Commonwealth of Albion, and nothing signified the division and distrust between the two nations more than the Great Wall of London. 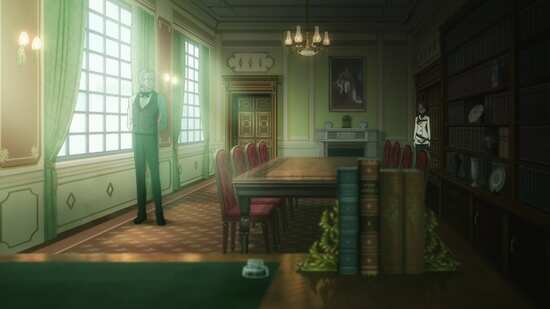 Ten years on, a state of Cold War exists between the Commonwealth and the Kingdom, and the Commonwealth has established a spy network in London to maintain the balance of power, if not nudge things in their favour. Operating from the Queen’s Mayfaire Academy, five school girls undertake missions for the Commonwealth, but they are a diverse bunch. Dorothy and Ange serve the Commonwealth, but the granddaughter of the Queen of Albion herself, Princess is a symbol of the Kingdom, and she’s aided by her maid Beatrice. And from Japan, the warrior Chise completes the group. They are a finely honed group of operatives, but like any spy, they each have secrets of their own. 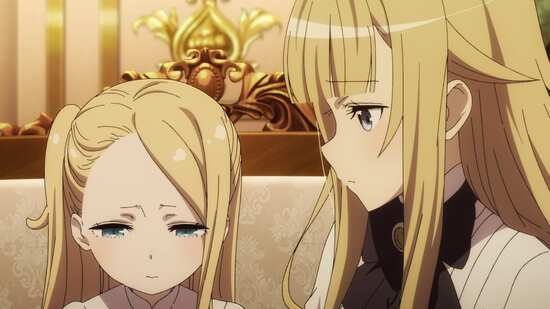 The espionage is strong in this instalment of Princess Principal: Crown Handler, as Prince Richard, Viceroy returns from the New World to a ticker tape parade, only to be targeted by an assassin. He survives the attack, but you’d think that would be enough to keep Dorothy, Ange, Princess Charlotte, Beatrice and Chise busy, but they actually have bigger fish to fry. The Commonwealth have devised an ultimate weapon in the Cavorite bomb, but three prototypes have been stolen. Worse, they’ve been smuggled into the Kingdom. Worse still, the suspect is a third party that actually wants to instigate a war between the Kingdom and the Commonwealth. The girls have to find the bombs before they are used and it’s too late for them all. 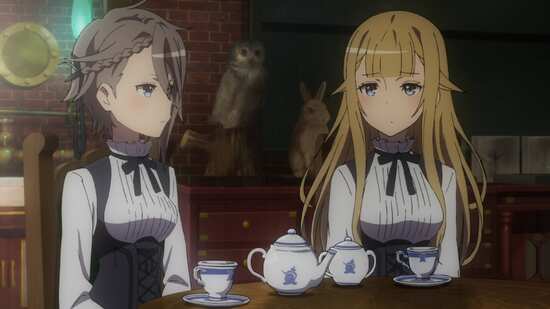 Princess Principal gets a 1.78:1 widescreen 1080p transfer on this Blu-ray disc. The image is clear and sharp, colours are consistent, and there are no problems with compression artefacts or aliasing. Given that it’s such an atmospheric show, with a lot of dark, moody, even foggy (this is London) scenes, it’s nice to see that digital banding is as light as it is in this show. And Princess Principal is a beautiful show, with charming, consistent and memorable character designs, and a detailed and imaginative steampunk world design. The animation is detailed and fluid, and you can see that this is a big budget, high production value show. It’s even better for this theatrical short feature film! 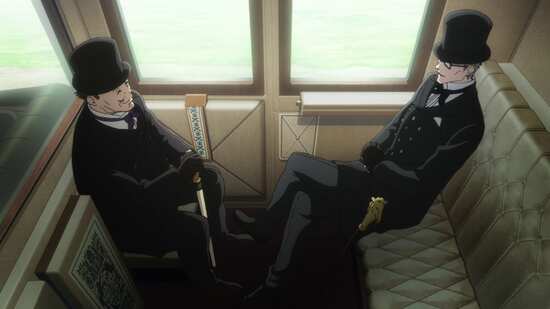 You have the choice between DTS-HD MA 5.1 Surround English and Japanese, with subtitles and signs locked during playback. I was happy with the Japanese audio, the actors are suitably cast for their roles, and the action comes across well through the surrounds. The music is doubly notable, with excellent theme songs, while Yuki Kajiura provides the score for the episodes. As for the dub... with a show set in England, the US dub is only as good as the worst English accent. All it takes is one Dick van Dyke... The subtitles are accurately timed and free of typos. The surround audio is really good, nice and immersive and making this theatrical presentation really shine. 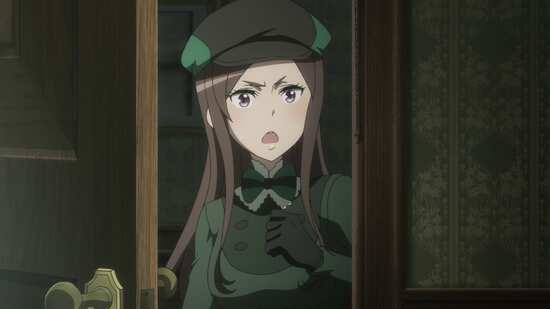 You get one disc in a BD Amaray style case with a reversible sleeve if you are logo-averse. The disc boots to a static menu. On the disc you’ll find the following extras. 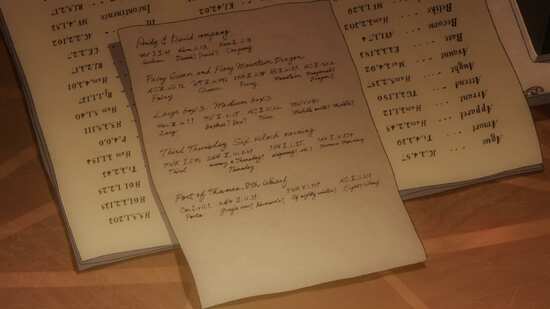 I may have said this before, but I love the Princess Principal franchise. It scratches that spy thriller itch that ROD The TV, and Darker than Black left behind, which gives some impression of how long it’s been since the last decent spy anime. Crown Handler Chapter Two picks up where the first left off, but to its credit, this instalment works well enough as a standalone feature as well. It really ups the stakes when it comes to the story, and it isn’t shy on action as well, delivering that trademark steampunk vision with style and elan. 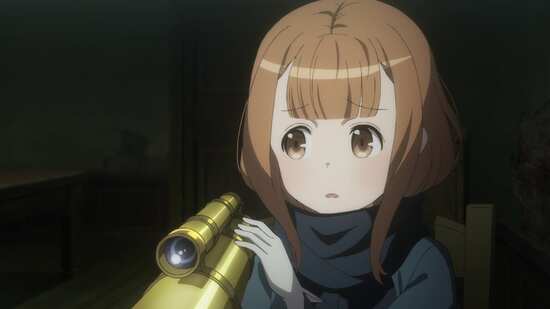 The best spy thrillers are all about nuclear brinkmanship, and heroes chasing a countdown to a mushroom cloud in order to save the world. The anti-gravity Maguffin Cavorite in this show may be technically different from Uranium 235, but in bomb form, the effects are close enough to a nuke to make no material difference. There are two plotlines at work in this story, with Ange, Dorothy and Chise on the hunt for the stolen weapons, while Princess Charlotte and Beatrice have to deal with the intrigue and aftermath of the assassination attempt on Prince Richard. 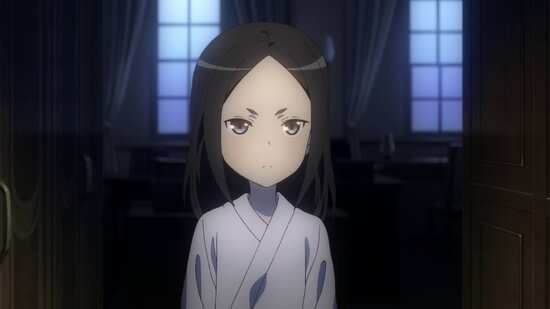 There’s a lot going on in the Royal family, with the Empress taken ill, and more and more responsibilities being assumed by the eldest Prince Edward. He decides to share the load, and with Richard confined to a convalescent bed, he turns to the youngest Princess Mary to make her public debut. The timid little girl winds up relying on Charlotte to give her confidence. 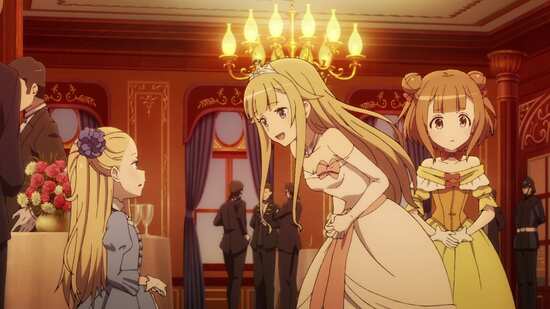 It may be a bit of a spoiler at this point, but hardly unpredictable that both these story arcs converge as the film progresses, and I have to say that the reveal of this instalment’s antagonist was foreshadowed maybe a little too obviously. But this second chapter of Crown Handler leaves us on a stunning cliff-hanger that makes it all worthwhile, and really does set up the rest of the story in a way that maybe the first chapter didn’t quite manage to. Certainly, I can’t see Chapter Three standing alone the way this one did. 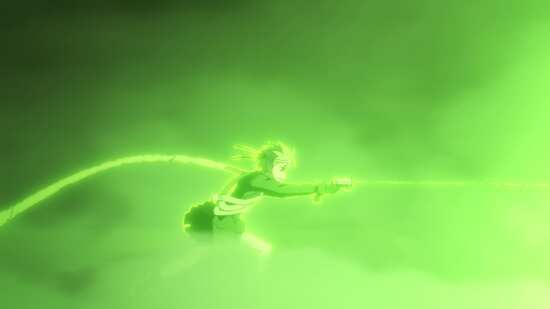 If you enjoy Princess Principal, and I don’t see why that wouldn’t be the case, then this release is just as essential as any of the others. The story is getting more and more compelling, while MVM’s Blu-ray, inherited from Sentai delivers the show with the quality that you would demand at this point.