Girls und Panzer fans could be forgiven for having a false sense of entitlement at this point, given just how MVM have delivered on the das Finale releases thus far. Six short feature films have been planned to conclude the Girls und Panzer story, and 2022 has seen three of them released in the UK on Blu-ray. At this point, you might be expecting a similar release schedule for the concluding half of the story in 2023. But the fact of the matter is that we’ve started late with this series. When it comes to their Japanese theatrical release dates, Part 1 came out in 2017, Part 2 in 2019 and Part 3 in 2021. This Blu-ray release of Part 3 in the UK follows 18 months after its Japanese theatrical release, and as you can see in the extra features on this disc, Part 4 is due for its Japanese release in spring of 2023. At this rate, it will be 2028 before we see the final part 6 on a UK Blu-ray. Let’s not even talk about the Princess Principal movies... 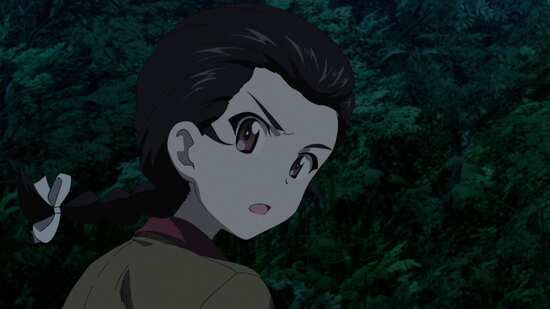 To be an elegant, well refined, and educated young girl takes education, deportment, etiquette, a knowledge of the finer things, and tanks. In the world of Girls und Panzer, young girls are expected to learn and participate in the Martial Art of Sensha-do, tankery, in which they compete in regulated tank warfare games, learning to work together as part of tank crews and battalions, in a world where girls’ schools are set aboard gargantuan aircraft carriers turned into small cities in their own right. Miho Nishizumi was escaping this world when she came to Ooarai Academy, a school without a Sensha-do club, but circumstances compelled her to return to the sport anyway. The school was threatened with closure, and the only way to save it was to make a big impact. The school would be saved if it won the world Sensha-do tournament. And so Miho had to take a bunch of quirky girls, and a battalion of salvaged, decrepit tanks, and turn them into a highly trained, tactical fighting force to save the school. Then she had to do it all over again for the movie! As das Finale begins... this time it’s personal. 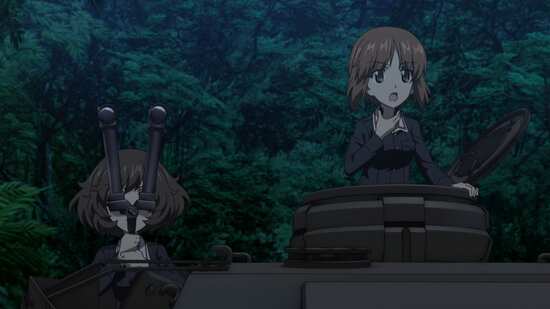 A year has passed, and it’s all change in the student council, with Miho’s teammates now taking over from the previous administration. Speaking of which, the previous student council PR Manager, Momo Kawashima is in trouble as this film begins. Rumours abound that she has failed her exams and will have to repeat her final year at Ooarai Academy. It’s not quite that bad; it’s just that she’s having trouble with her university entrance exams. So the girls come up with a plan, to get her into university on a Sensha-do scholarship. It does mean that she’ll have to take over as commander from Miho in the forthcoming Caterpillar Tread Cup. It’s a good thing that they’ve found a ninth tank for their team, and a new crew to drive it. 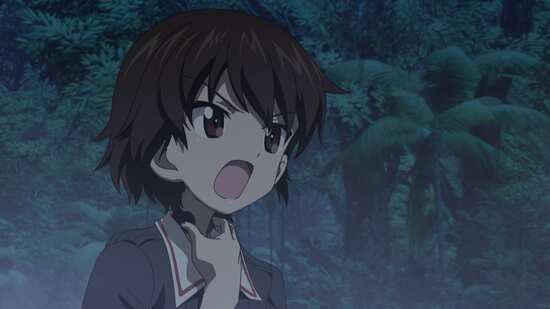 At the end of Part 2 of Girls und Panzer das Finale, Ooarai Academy had come up against the Chi Ha Tan team once more, a team that they had previously defeated roundly. But this time, Chi Ha Tan had learned more than one tactic than an all-out attack regardless of the odds. And as Part 3 begins, Ooarai are on the back foot, outplayed and in need of a new plan. 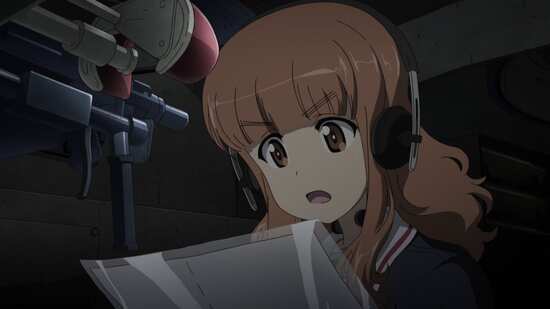 Girls und Panzer das Finale 3 gets a 1.78:1 widescreen 1080p transfer on this disc. The image is clear and sharp, excellent with detail and with rich colours. This outing gets a cinematic level of production value when it comes to the character animation, and especially when it comes to the tank action. While you have the usual cute girl designs, the characters are animated well, and you get to see their different personalities. The budget goes to the tank designs, which manage to inject an air of authenticity even in this cutesy, primary colour world, and which through the use of deft CGI blended into the 2D animation really comes across well. You get all of the edge of the seat action and tank strategies brought to life in this anime. 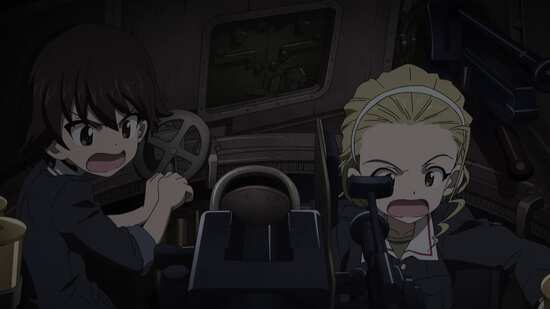 You have the choice between DTS-HD MA 5.1 Surround English and Japanese, with subtitles and signs locked during playback. I went with the Japanese audio for the familiarity of experience with the voice actors. The surround track is a step-up from the stereo of the TV series, but I did feel it was a little overcooked when it comes to the character voices, deliberately placed around the speakers in an unnatural way at times for off-screen characters. The action is powerfully conveyed, but to the level that it can overpower the dialogue, or rather the centre speaker needs a higher volume level. Either way, I wished that there had been a stereo option. The surround is watchable enough, but it could have been better balanced. The subtitles are accurately timed and are free of typos. 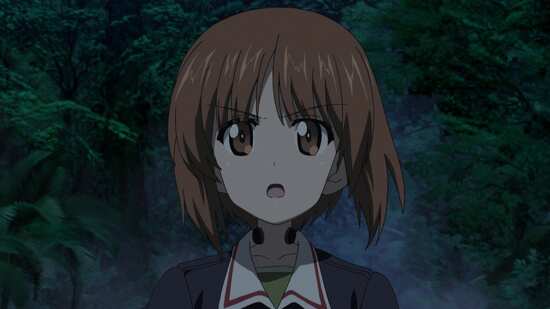 You get one disc in a BD Amaray style case, with a reversible sleeve (if you don’t like ratings logos). The disc boots to a static menu and the film is followed by a silent translated English credit scroll. On the disc you’ll find the following extras. 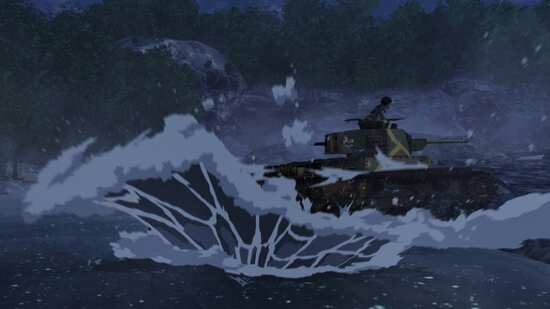 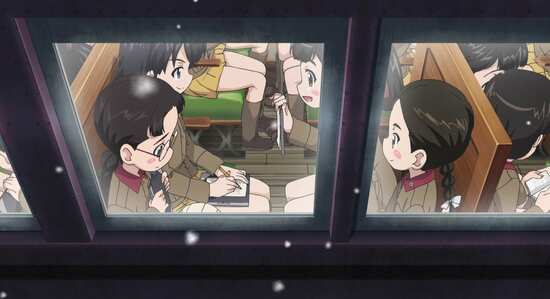 The big extra on this disc is the Daikon War OVA which lasts 11:26. This time it’s a standalone story, which sees the gang looking for the Agricultural section of their school to deliver some administrative documents, and getting pulled into a Western looking landscape, learning to ride horses instead of tanks. 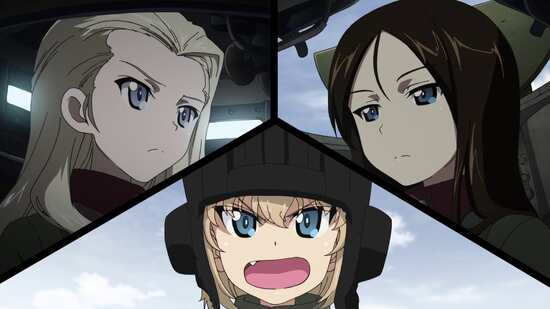 I suppose at this point that it’s redundant to say that this release is really only for fans of Girls Und Panzer, and anyone unfamiliar with the franchise would do better to start with the series. What also becomes clear with this release is that there will probably be a cyclical familiarity to the instalments of Girls Und Panzer Das Finale that may provoke the cynical to comment harshly. It might even be justified, if you’re not invested in the franchise. I may have said as much for the Part 2 release, but I don’t care, as I love Girls Und Panzer that much. 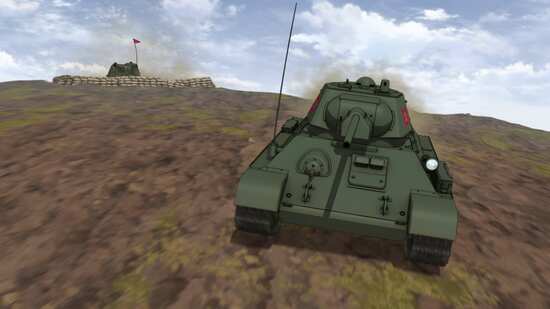 It is a tournament story after all, with teams progressing systematically towards the final match, so repetition is the order of the day. Still, once again the previous instalment left on a cliff-hanger, with the Ooarai team having been dealt a quick reversal in their current match. The new instalment picks up after that reversal, compelling them to dig deep, and find a new, innovative way to turn the tables and advance to the next round. Once again, that really can’t be a spoiler in a tournament story where the protagonists have to make it to the finals for the story to make sense. It’s not that they win that’s important; it’s how they do so. There then follows a gap between successive matches with the Ooarai team relaxing, a chance for the cute girls doing cute things bit of the genre to prevail, before the start of the next match, and the cliff-hanger that will lead to the next instalment, 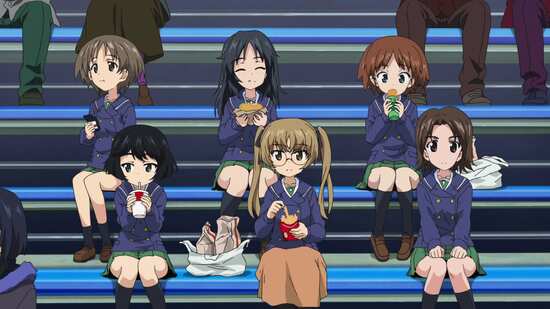 This instalment begins with the battle against the Chi Ha Tan team, who when previously encountered were a bunch of gung-ho fanatics, who only had “Charge!” in their strategy guides to tank warfare. That tended to end their matches sooner rather than later, although their first match with Ooarai opened their eyes to a different way of thinking. So naturally when it came to this re-match, Ooarai didn’t go in blind, but even still the level to which Chi Ha Tan had embraced alternative tactics actually pushed Miho’s team onto the back foot. And they’ve come up with some innovative ideas too, using a couple of amphibious tanks as makeshift bridges. And all this, while they maintain their customary zeal. 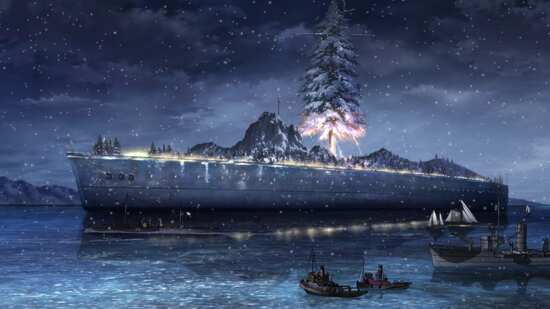 Then comes the downtime between matches, although in this Part 3 release, it’s less of the cute girls doing cute things diversion than it is more in the way of tank battles. There are three other matches being played to determine who makes it to the semi-finals alongside Ooarai, and of course they have to scout out the potential opposition. That means we get highlights of the matches between Pravda and Kuromomine, St Gloriana and Anzio, and Saunders versus Jatkosota. 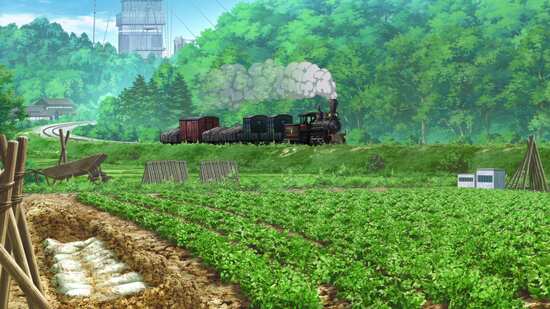 Then it’s time to start the semi-final between Ooarai and Jatkosota, and they turn out to be the black sheep of the competition. Something of an unknown quantity, they specialise in guerrilla tactics, which are all the more effective in the snowscape where the match takes place, so different from the jungle battle against Chi Ha Tan. They wind up inflicting the most challenging setback to date against Ooarai, this instalment’s cliff-hanger that will leave you wondering just how the team will come back from that. 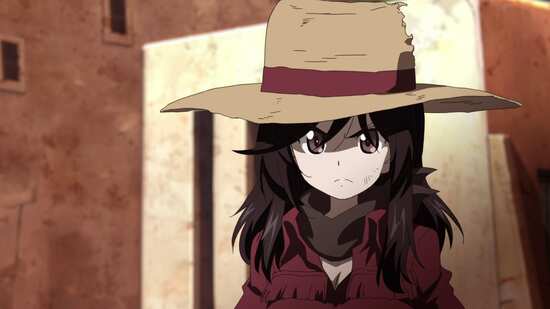 I have to take a paragraph here and talk about the Daikon War! OVA. I love Girls Und Panzer, and I enjoyed every minute of this instalment of Das Finale, but the Daikon War! OVA may just be the best thing on this disc. Given that the ‘downtime’ in the main programme was devoted to more tank battles, this OVA constitutes the ‘cute girls doing cute things’ bit. It’s just eleven minutes, but it packs so much in. The girls are on horseback, travelling through the agricultural section of the school to find the Ag representative. The further they go, the more of a Western they find themselves in, tracking their target through canyons and plains, encountering Native Americans and the like. Until they get pulled into a genuine showdown. There’s a fair bit of story packed in, a running gag that is hilarious, and a dozen or so Western movie references that just tickled me pink. 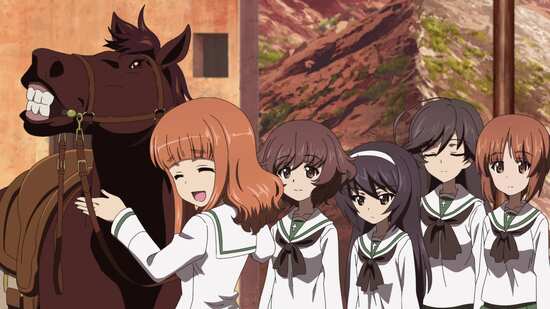 Were this any lesser show, I’d be nitpicking about how the balance has shifted towards action to the detriment of the slice of life aspects of the story when it comes to this Das Finale series. But I actually don’t mind, and I’m enjoying it just as much. Girls Und Panzer is my go-to, feel-good franchise, and I’ll never get tired of its fun antics. This Blu-ray is up to the standards that you’ll be used to by this point.