I don’t know when it happened, but the world turned upside down. When I was younger, I’d watch a movie in the cinema, and if I liked it, I would get it on video, or DVD. But now, it is actively cheaper to buy the film to own, than it is to take a couple of hours out and step inside a multiplex. And the thing is that I may not want to own the bloody thing after I’ve seen it. I want to watch Jurassic World Dominion, given that I somewhat enjoyed the first two films in the spin-off franchise, but given public reaction to Jurassic World Dominion, I wish I still lived in an economy where I could just drop five quid on a cinema ticket, instead of fifteen on a Blu-ray. Still, it has that Star Trek Generations vibe to it, of two eras colliding, as the Jurassic Park movies that started the whole thing, meet the Jurassic World spin-off. I just hope it doesn’t have the equivalent of Captain Kirk falling off a bridge. 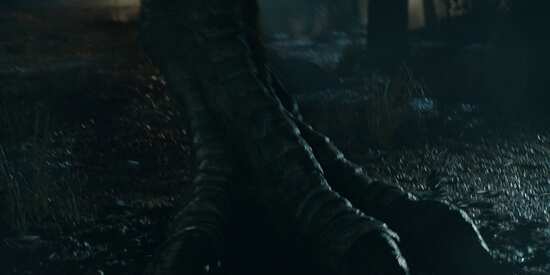 Four years have passed since the events of Jurassic World: Fallen Kingdom, and dinosaurs have spread across the world once more. A healthy black market trade in the creatures has grown up as well, and governments have trusted in the Biosyn Corporation to master and control the new technology, trusting the CEO’s goals of using ancient DNA to find new cures and medical treatments. 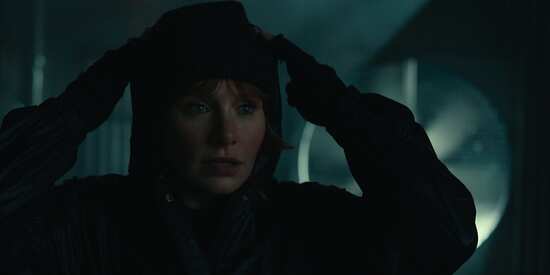 Since Fallen Kingdom, Owen Grady and Claire Dearing took the clone Maisie Lockwood, and hid her away out in the country from those who covet her genetic uniqueness, where Owen keeps his hand in, trying to protect the newly appeared dinosaurs from poachers. It isn’t long before their hideaway is discovered, and Maisie is taken. The clues point to Biosyn. 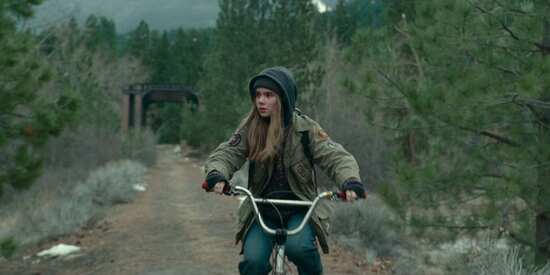 At the same time, a plague of prehistoric locusts has appeared, laying waste to crops, and threatening the food sources that humanity needs. Ellie Sattler has been studying this new plague, and the cause seems obvious when the locusts appear to leave Biosyn genetically engineered crops alone. She knows someone on the inside of Biosyn who can help her get in to find evidence, but she needs a witness to confirm her findings. She turns to palaeontologist Alan Grant. 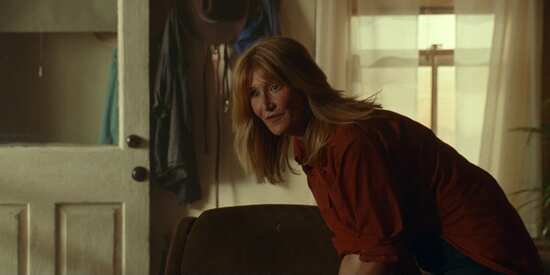 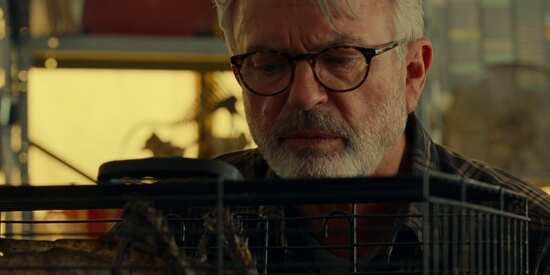 Jurassic World Dominion gets a 2.00:1 widescreen 1080p transfer on this disc, with the choice between DTS-X Surround English, DTS-HD Hi-Res 7.1 Surround Italian, and DD 2.0 Stereo English Audio Descriptive. There are English and Italian subtitles also. This isn’t a transfer to pick nits at, the image is nigh on pixel perfect, and the audio hits all the right notes when it comes to music and action. The dialogue too is clear and audible throughout. You might raise some eyebrows at the source material though, which is down to the filmmakers. CGI dinosaurs are ubiquitous in this film, and the technology is such you can’t see the seams between the ethereal and the tangible anymore, so well do animatronics blend with generated imagery. But I can’t help laughing at Chris Pratt riding a digital horse steadier than an off-road motorbike with an upgraded suspension. The film’s music is unnoticeable until the composer calls back to John Williams. 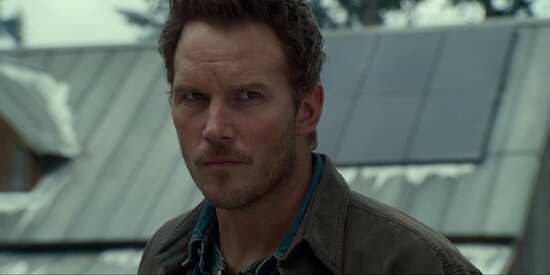 You get one disc in a BD Amaray style case, wrapped in an o-card slipcover that repeats the sleeve art and blurb. The disc boots to a mostly static menu, although the side panel displaying the extras is animated. You’ll find the following extras. 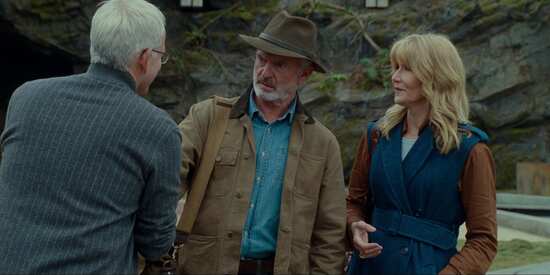 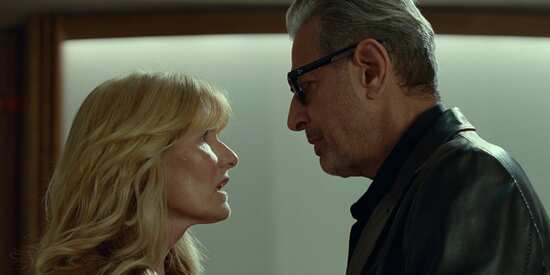 The latter is a collection of five featurettes that go behind the scenes of the film. The animatronics featurette therein is further split into five sub-featurettes. 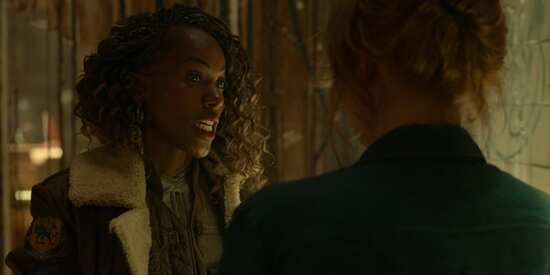 There’s a massive brick wall that Jurassic World Dominion asks me to climb over before the story even starts. Four years previously, there were a handful of dinosaurs on and around one island, and a few in the hands of that second movie’s antagonists. Four years later, they are all over the world, and in such numbers that they are pretty much in every scene. Even without the natural human tendency to kill and eat everything that isn’t human, or kill anything that gets in between us and our food, you’re asking a lot of the dinosaurs that escaped at the end of Fallen Kingdom, when it comes to breeding and migration. I can’t buy it at all, which is a big sticking point when it comes to me enjoying Jurassic World Dominion. 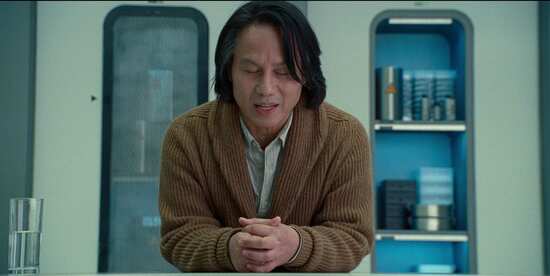 The fact that I was pondering this question for the better part of three hours yesterday should be some indication of the quality of this movie. In other words, it’s not very good. The only saving grace is the presence of Jeff Goldblum being as Jeff Goldblum as he can be, without slipping into a self-impersonation. He always gives good value, even in films which don’t deserve it. But really, Jurassic World Dominion merely serves as a retread of bits that the previous films did to better effect, warmed up leftovers really. We have another evil tech genius looking to misuse resurrected prehistoric life to line his pockets, and our heroes have to work together to stop his scheme, while avoiding being eaten by various species of dinosaur. 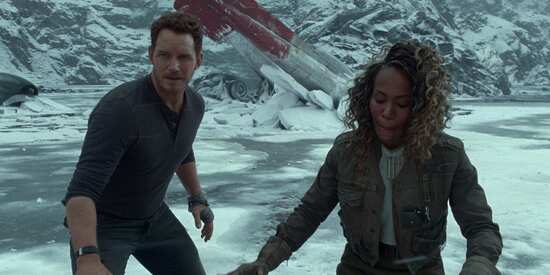 This is another in a long line of movies that base their tech villains on real world people; in this case a laughable facsimile of Apple’s CEO Tim Cook, again so obvious it was as distracting as the dinosaur proliferation question. A big problem still is that movie dinosaurs are old hat, and have been since the first Jurassic Park. There hasn’t been any sense of wonder with seeing a new monster for a long time, and everything the filmmakers try is either gimmicky, or just a generation improvement in software and hardware to make the quality of the animation all the better. And unlike Lost World, which compensated for that lack of wonder by actually having a decent story, Dominion has neither. 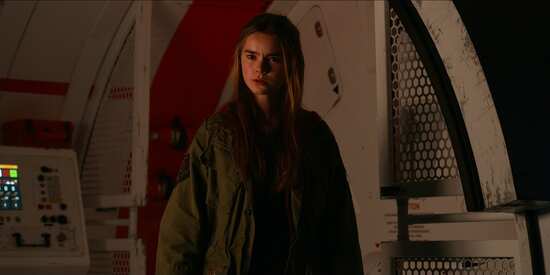 Dominion feels more like a collection of set-pieces, loosely held together, with an emphasis on ‘kewl’ dinosaurs that no longer feel cool, all looking like characters giving directed performances rather than like actual animals. They even throw in an action set-piece and chase sequence in Malta, which in terms of colour grading and direction seems lifted straight from the No Time To Die James Bond movie. Which also raises the question of why armed secret agents when faced with hungry dinosaurs turn and run without even trying to shoot them...? And Chris Pratt does his “talk to the hand” technique of dinosaur wrangling again. 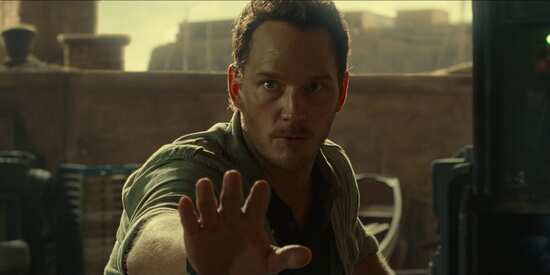 So let’s hear it for Jeff Goldblum, without whom I would never have made it to the end of this dull retread of a movie, and indeed might be the only reason I’ll consider watching Jurassic World Dominion again. Dinosaur movies are no longer fun... Who’d have thought?