Someone take away my wallet! I really don’t know why I bought this, other than the obvious bargain price I must have found it for. When I reviewed the DVD release of Norn 9, I do remember being rather underwhelmed by the experience, to the point that I can hardly remember the show. I think my mental note space is taken up with the warning never to double dip on Love, Election and Chocolate to avoid the awful subtitle flub which makes me wince each time I see it. I literally have no idea why I would be excited by the prospect of Norn 9 in HD, given that I can’t recall anything about the SD experience. Anyway, let’s re-watch it and find out. 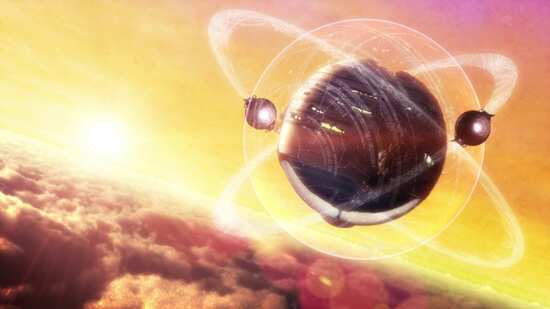 A girl has been alone so long that she can’t even recall her name. But she does remember what a passing traveller once told her, that one day a ship will come for her, that she should get on board, as her ability will be needed. When that day arrives, everything changes, as the Norn is a spectacular ship, a veritable village, a planet in microcosm soaring in the sky. The girl joins two others, and nine boys who each have fantastic powers, and have been gathered by the “World” organisation to keep the peace. But not everything is as it seems... 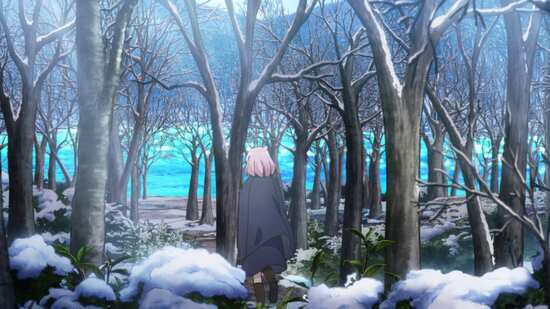 12 episodes of Norn 9 are presented across 2 Blu-ray discs from MVM.

Disc 1
1. The Ship That Sails in the Sky
2. Ability
3. Sprouting Spring
4. Serenade of the Dawn
5. The Dozing Forest
6. The Gears in Motion
7. A Dream of Reality
8. The World
9. The Truth for Everyone 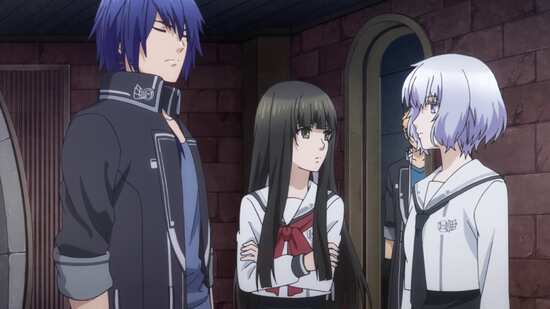 The DVDs suffered from a rather mundane Madman re-author, but the Blu-rays mirror the original US Sentai discs, which means the menus and disc structure are as you would expect. The 1.78:1 widescreen 1080p transfer is clear and sharp, with fine consistent colours and smooth playback. Norn 9 is an imaginative and visually striking show, very impressive at first encounter, especially when it comes to the world design and backgrounds. The character designs are elegant and pretty, as you’d expect given the show’s target demographic, but the weakness comes in the limited character animation, which borders on the static at times. But it all looks so much better on the Blu-ray compared to the DVD format release. It’s just a shame that looks aren’t everything when it comes to evaluating a show. 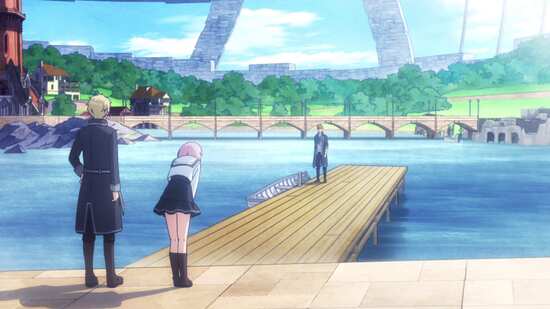 The sole audio track is the DTS-HD MA 2.0 Stereo Japanese, with English subtitles locked during playback. It’s perfectly fine, with no distortion or dropouts. The dialogue is clear throughout, with the actors suited to their characters, the subtitles timed accurately and free of typos. The show’s music is grand and theatrical as you might expect from the epic nature of the storyline, although the theme songs aren’t exactly memorable. 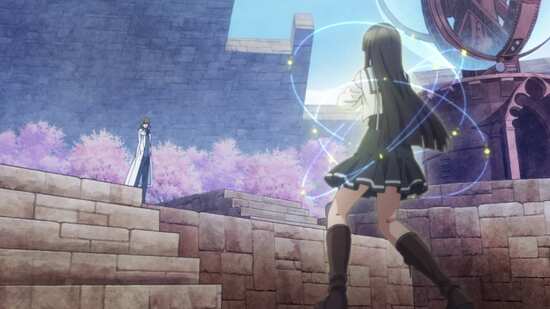 You get two discs in a BD Amaray case, one held on each inner face. The discs boot to static menus.

Disc 2 offers the textless credits, one opening and two closing sequences. There are also trailers for Utano Princesama Revolution, Kokoro Connect, Momokuri, and My Love Story!! 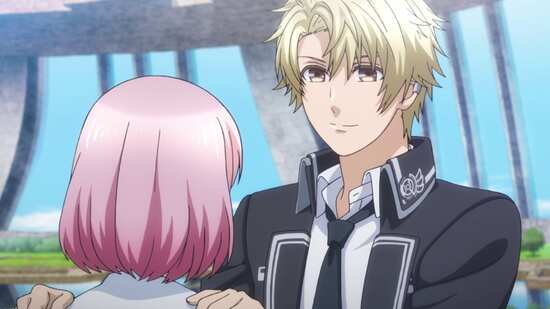 There are so many anime series out there like Norn 9, variable and uneven, with much to criticize and a fair bit to appreciate. The thing is that most such shows start off strongly, and fade towards the end, or complete fall apart. Norn 9 manages to switch it around, presenting a lacklustre, uninspiring, cliché ridden and disappointing series to begin with, only to turn into something quite different by the end, engaging, thoughtful, and fulfilling a brilliant premise that you didn’t even know existed when the show began. Norn 9 went from practical snooze-fest to compulsive viewing by the end. The big question is, are you willing to wait until episode 8, when the switches are all flicked, and the whole point of the story becomes clear? 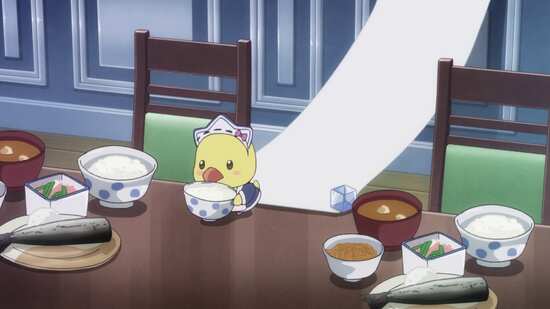 The turn-off for me is that Norn 9 starts off as very much a reverse harem show, one in the vein of shows like Brothers Conflict, where you have a non-descript, cipher female main character, and several elegant males all conforming to fan friendly stereotypes, and much intense dramatic romantic interludes ensue. You can bet at one point she’ll be pushed against a wall while a guy will lean in with romantic menace to make a point about just how much of a bad boy he really is. There will be a cute young boy, who is too young, but is there for the playful moments. The moody, quiet one, the loud, brash one, the sporty one, the effeminate one... 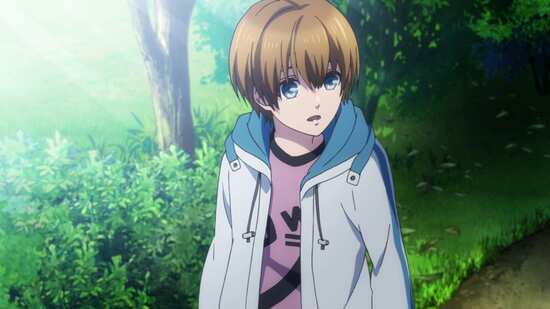 I certainly was expecting all this with Norn 9, especially as it kicks off with such character overload that I never did get all the minor characters straight in my mind, even after the twelfth episode. But Norn 9 doesn’t really go that far in this direction, certainly the male stereotyping is far less pronounced, even if the characters aren’t all that well developed. There are three girls in the story to begin with, and all of them have fairly well defined relationships with their potential significant others, so it’s less of a harem show than it is one that in the first half explores the tensions in their respective relationships. 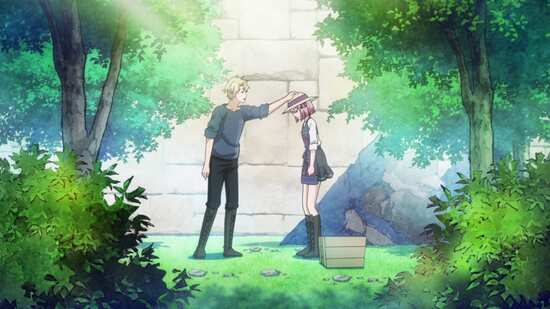 The thing is that the story is really ephemeral during the first half of the show. A girl named Koharu is picked up by a massive ship, Norn 9, and she joins several other teenagers with special abilities on its journey. And it’s all tied in with a mission for The World organisation, maintaining world peace. It’s all relationship angst and interpersonal trivialities for the most part, while in the background, little seeds of the story are sown, plot developments will occur. The trouble is that they happen, and are promptly forgotten about. There is an attack on Norn at the end of the first episode, but the attackers soon retreat and are forgotten about for half the run. At the end of the second episode, a boy named Sorata magically appears on Norn, We learn that he’s from the year 2016, while Norn is implausibly drifting in the skies of 1919. Sorata’s consternation is relatively short lived, he’s not too worried about getting back, and he quickly settles in with the others. Koharu’s love interest in the story, Kakeru has a complex about his earring, somehow related to his murdered father, and there turns out to be a traitor on board, who we as viewers know the identity of long before the characters find out. These and other story developments are all as pinpoints of light in a twilight of romantic tedium. 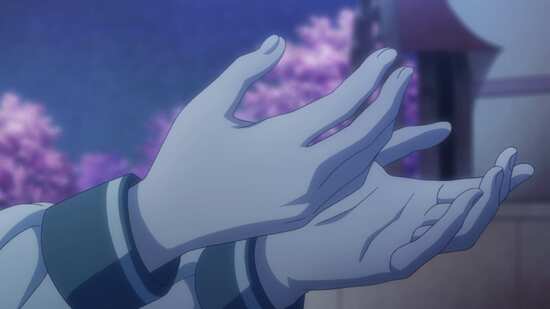 It’s in episode 8 that you realise that these pinpoints are actually stars, it’s in episode 8 that they begin to resolve into constellations, forming a grand night-time vista of narrative. You begin to learn what this story is actually about, the mission of Norn, and the various teenagers with abilities that it has picked up on its travels. You learn about its destination, about the world in which these children live, its past and its future. Norn 9 gets really good for its conclusion, a finale that makes watching the show all worthwhile. You’ll just have to stick it out through seven episodes of gooey-eyed, reverse harem antics before you get to the good stuff. 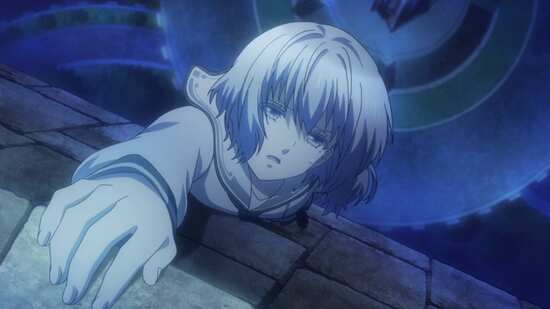 If Norn9 is your anime of choice, then it’s a no brainer that Blu-ray is the format that you should buy it on. Setting aside the fact that the DVDs are a comparatively disappointing Madman re-author, the very fact that this is such a visually inventive and rich world, that there is so much detail and production value on screen, means that only high definition can do the show justice. 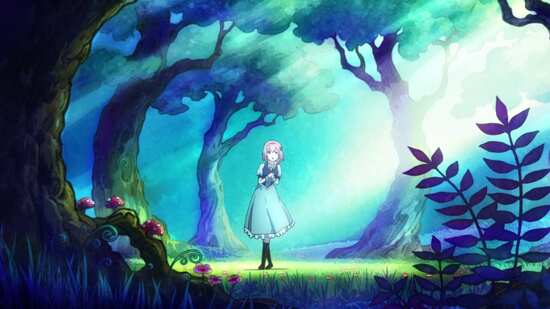 But for me that is where the positives end. My second time around with Norn9 was even more of a chore than the first viewing. Back then, I thought it was worthwhile taking in eight episodes of relationship trivialities and inanities for the final few episodes where the show actually delivered on its premise. I wasn’t as forgiving this second time though, as more often than not I was bored to distraction for most of the run of episodes, so bored that even when it did finally get interesting, I had no motivation to pay any attention. Just because a story has a good ending, it doesn’t mean that you have to forgive the majority of it being rubbish. Norn9 is a one and done show. Unfortunately, we no longer live in a world where we rent Blu-rays. Let me put it this way, I could fall asleep watching an episode of Norn9 and I would be fine with that.