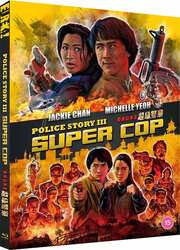 Action superstar Michelle Yeoh (Everything Everywhere All at Once) joins the series as Inspector Yang Chien-Hua, who teams up with Chan Ka-Kui to take down an international drug ring. With some of the most outrageous stunt sequences ever committed to film, Police Story 3: Supercop is an action masterpiece that must truly be seen to be believed.

Regularly appearing on lists of the best action films ever made, Eureka Classics is proud to present Police Story 3: Supercop for the first time on home video in the UK since the VHS era from a brand new 4K restoration!