Chuck Steel: Night of the Trampires 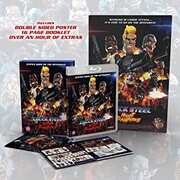 Synopsis:
Get ready for the most outrageous stop-motion animated film ever made!! It's 1986, and Chuck Steel is 'the best God damn cop on the force'.

When an abominable evil is about to descend on the city of Los Angeles in the form of Trampires – half tramp, half vampire, only a maverick cop who doesn't play by the rules can save humanity.