I bought the wrong Kung Fu! It’s my own fault of course, 88 Films threw up a 10th Anniversary discount sale on their website, just when I had a future purchase in mind. With Kung-Fu Bob O’Brien creating a cover art using a similar colour palette, and with me feeling a little rushed, I wound up with the postie delivering Monkey Kung Fu to my door, instead of Half a Loaf of Kung Fu, which is yet to be solicited on the site. Reading the blurb on the back though was enough to get me opening the cellophane rather than sending it back. For a traditional kung-fu comedy from the hind end of the seventies, Monkey Kung Fu does things a little differently.

Wai Chung is going to prison for murder, although he hardly seem contrite when he faces the warden. It comes as no surprise that he gets a cell with Ma, an old reprobate that is the bane of the prison, and is on death row. It’s annoyance at first sight, and Chung’s time in prison turns into a series of kung-fu battles. But Ma takes a liking to his stubborn cellmate, so before his execution, he gives Chung a semi-circular piece of carved wood, and tells him that when he gets out, and if he finds the other half to the medallion, he’s inherit an incalculable prize.

He gets the chance to escape soon after, and takes the man he’s chained to at the time along for the ride. But Jau was committed to the prison the day Ma was executed, and he’s not there by chance. Not long after their escape, a gang shows up at the prison, looking for Ma, and more importantly the wooden carving that he gave Chung. The chase is on...

Monkey Kung Fu gets a 2.35:1 widescreen 1080p transfer with the choice between PCM 2.0 mono English and Cantonese, with optional subtitles and a signs only track. The restoration is excellent. The image is clear and sharp, with rich and consistent colours. Detail levels are excellent, and there are no signs of age or print damage. 88 Films’ presentation here is properly filmic, and the only nits to pick might be a couple of moments of lower quality production value, and some fast pans revealing the distortion of anamorphic lensing. I was happy with the Cantonese audio, with the dialogue clear, the ADR sync pretty good, and the action coming through with enough impact. The film is notable for its spaghetti Western-esque music score. 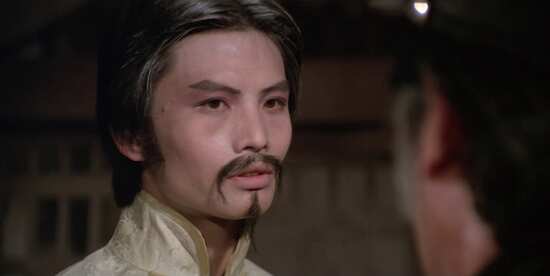 You get one disc in a BD Amaray style case with an o-card slipcover. The case also has a reversible sleeve with the original poster art alongside the new cover art. You can see this again in a double-sided foldout poster. The 24-page booklet gets extensive writing on the film from Andrew Graves along with plenty of stills and original production art.

On the disc you’ll find the following...

Stunting Around – An Interview with Choreographer Tony Leung Siu-hung (14:46)
Original Trailer (3:57)
Audio Commentary with Kenneth Brorsson and Phil Gillon of the Podcast on Fire Network

There are ingredients common to most period kung fu movies from the seventies and early eighties. There will be rival schools, an ultimate style of kung-fu, and a fallen master demanding to be avenged. Monkey Kung Fu is no exception in this regard, but how it does all this feels utterly original and fresh. It takes the better part of an hour before the rival schools are mentioned, we don’t hear about the fallen master until the final fight, and the protagonists only learn what the treasure is, the Monkey Kung Fu manual, when they finally find the thing. The build up to all this feels original and different, and that all makes Monkey Kung Fu a film worthy of your attention.

I also got Young Master vibes, with the youthful protagonists presented as cocksure and mischievous, prone to pranking their foes and each other. It’s a comedy of personality rather than gags and pratfalls, and the joy is in seeing their constant one-upmanship.

Monkey Kung Fu starts in such a different way, with Wai Chung being sent to prison for his sins. The old man that he winds up sharing a cell with is the bane of the prison, and it isn’t long before they are kung fu fighting behind bars. The old man tends to outclass Chung with his monkey style skills, but he takes a liking to the younger man, enough to entrust him with his wooden carved treasure map. Chung and Jai are compelled to escape soon thereafter, and as they’re chained together the film takes on a “Defiant Ones” tone, tinged with comedy, as the pair has to figure out how to work together, while at the same time evading the gang who’ve showed up, looking for the wooden amulet.

Once they break the chain, they’re ready to go their separate ways, but Chung keeps getting into trouble, not least with a kung-fu prostitute who doesn’t take kindly to being short-changed. Rather than actually split up, Jau has been following Chung, ostensibly to keep him out of trouble, hut it quickly becomes clear that he has ulterior motives. All of that is tied to what lies at the end of the treasure hunt, the gang that’s chasing them, the two rival schools and that fallen master.

It’s back to normal service for this genre of movie for the final act, but by that point Monkey Kung Fu has built up so much goodwill by doing things differently that I don’t even mind. Monkey Kung Fu isn’t a landmark film in the grand scheme of things, but they way it has a fresh take on a tired formula, plus the irreverent characters and sense of fun make it well worth your time. It’s packed to the gills with action, and there’s plenty of inventive martial arts choreography, while the transfer on this disc is impeccable. I’m so glad I clicked on the wrong movie.