I don’t usually expect a show to go up in my estimation the second time I watch it. Actually it’s usually the reverse, and I think of it as a positive if I simply enjoy it just as much the second time around. While I didn’t see much difference with the first season of Little Busters when I re-watched it, I found that the second season, Little Busters Refrain actually worked better the second time around, and consequently elevated the first season as well in retrospect. This brings us to Little Busters EX, the third instalment of the franchise, the eight episode run of side stories. I found this the weakest element when I reviewed it on DVD, but given my recent experience with Refrain, I now find that I have positive expectations of EX now that I’m looking at the double-dipped Blu-ray. I may be asking too much this time. 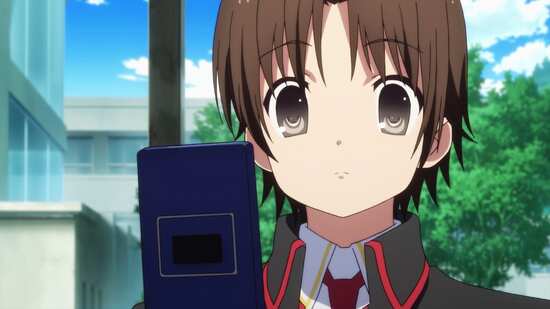 When Riki Naoe was a child, he suffered the tragic loss of his parents. But his depression began to lift when he was befriended by siblings Kyousuke and Rin Natsume, and Masato Inohara, and Kengo Miyazawa, collectively known as the Little Busters. They invited him into their gang, and made his childhood an adventure, where they were heroes of justice. Now, as Riki is in his second year of high school, Kyousuke ready to graduate, those childhood dreams have started to fade as adulthood beckons. But Riki wants to recapture those dreams once more, and that gives Kyousuke an idea. A baseball team, called The Little Busters. But first they need four more members. Meanwhile cat lover Rin is getting little messages tied to her cats, clues to the ‘secret of the world’.

Little Busters EX is based on the Little Busters Ecstasy Visual Novel, and tells of Riki Naoe’s encounters with three other characters, Saya Tokido, Sasami Sasasegawa, and Kanata Futaki.

Eight episodes of Little Busters EX are presented on one Blu-ray disc from MVM.

1. Agent Saya Tokido
2. In the Dungeon
3. The Darkness Executives
4. Someday, Somewhere
One night venturing into school to get a notebook, Riki runs into a girl with a gun fighting shadowy beings. After a few false starts, Saya Tokido explains that she’s a secret agent, and she’s on a mission in the school to find a secret treasure, a treasure that lies deep in the dungeons under the school building. Seeing how Riki always manages to survive her attacks on him, she recruits him to be her partner... 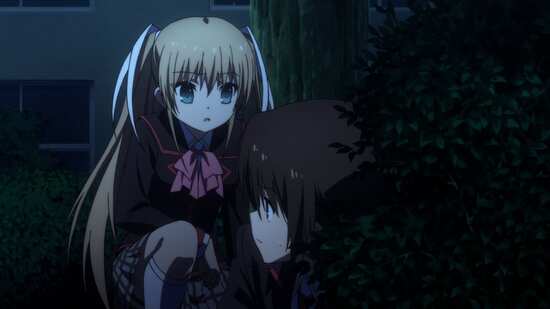 5. Sasami Becomes a Cat
6. A Small World Someone Wished For
Sasami Sasasegawa is the captain of the school softball team, occasional thorn in the side of the Little Busters! and professional school princess. Only now she’s a cat. She’s actually transformed into a moggy, only Riki can understand her mewing, and she can only become human again while she’s alone with Riki in his dorm room. There’s got to be a reason why this has happened, and only Riki can get to the bottom of the mystery. 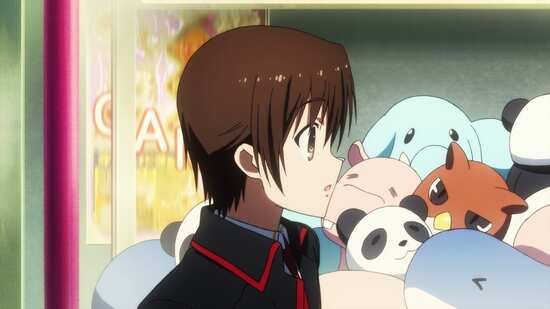 7. Kanata’s Secret
8. Our Bond
When it seems that the Little Busters’ clubroom will be taken away from them, Kyousuke’s plan is to apply a little diplomacy to the student council. It’s Riki’s job to help out the Disciplinary Committee, and that means spending time with Haruka Saigusa’s sister, Kanata Futaki. Only Kanata is being even more antisocial than ever. It’s no surprise as her controlling family is turning up the pressure once more. 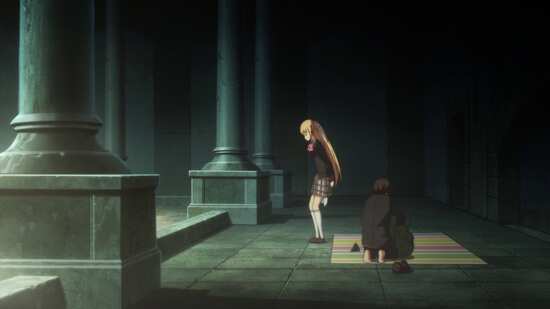 Little Busters gets a 1.78:1 widescreen 1080p transfer. The image is clear and sharp, the animation comes across without issue, and colours are strong and consistent. That’s even with the less than impressive animation for the show, compared to Key Visual titles that came from Kyoto Animation. For Little Busters, it’s Studio J.C Staff doing the honours, and they have given the show a rather lacklustre and unenthusiastic animation. The character designs are consistent, but the character animation never delivers the right level of emotion. The world design is rather pedestrian, and the animation too is one that looks to cut frame counts to save on money and effort, rather than deliver something evocative and memorable. But at least this time compared to the first series, the detail in the line art, the richness of the colours and the smoothness of the animation makes the Blu-ray worthwhile. 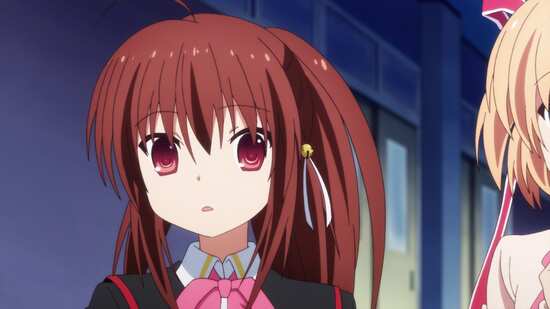 You have the choice between DTS-HD MA 2.0 Stereo English and Japanese, with translated subtitles and a signs only track locked during playback. Little Busters dates from that period when Sentai’s dubs were at their nadir, and I certainly couldn’t live with more than a minute or so of this one. Fortunately the Japanese audio is present and correct, with the cast suited well to their roles, and the overall viewing experience is more than acceptable, with the action represented well, and the show’s musical themes feeling typically game-like as for all Key/Visual anime. The credit theme songs are very catchy, the opening gets a rockier guitar remix, and we get a Lia end theme for one of the episodes, a Key/Visual trademark. 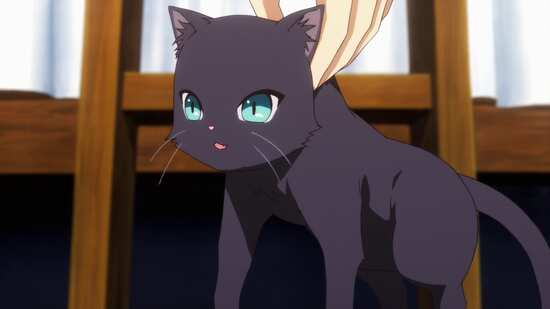 You get one disc in a BD Amaray case, which boots to a static menu. The episodes are followed by a translated English credit reel.

You get four textless openings and seven textless endings, and trailers for Gatchaman CROWDS Insight, RIN-NE, Wish Upon the Pleiades, and Aoharu X Machinegun. 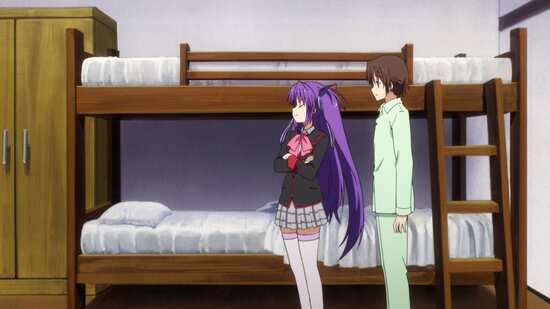 The Little Busters story is done and dusted with the first series and Refrain. There’s very little that you can add to it. But you can have side stories, little adventures with all the characters that add more colour to the universe without adding to the main story. Of course when it comes to adapting the videogames, there are bound to be mini-games and side adventure storylines to adapt. Not being a gamer, I can’t tell you how accurate these three story adaptations are, or indeed if they are original to the OVA release. What I can tell you is that Little Busters EX is not that good, at least not at first. 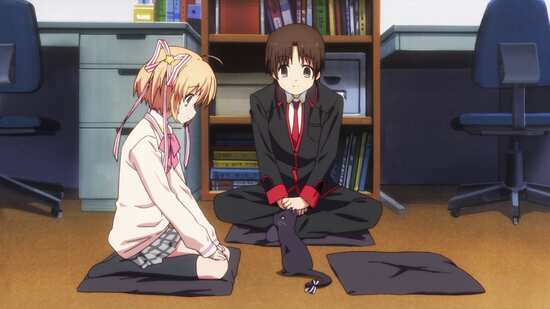 You have three stories here, the first taking up a whole disc and running to four episodes, the other two lasting two episodes apiece. The downside is that the first story, half of this collection is weak indeed in terms of the Little Busters story. Indeed it could even be said to stand outside the story altogether, an alternate universe tale. It features a character that we haven’t encountered before, Saya Tokido, and her secret agent mission in the school, into which Riki is co-opted. It’s a love story between her and Riki, which instantly puts it outside of the main continuity, and it also concentrates on their characters to the detriment of the others. Characters like Masato and Kyousuke appear pretty much as cameos, while the other characters may appear, but they don’t even speak. It’s a two-hander that feels small, and it can’t quite sustain the four episode run time. 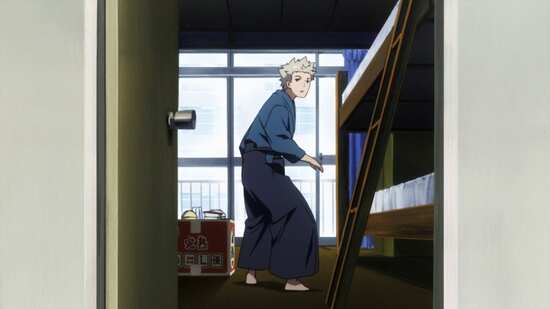 That isn’t a problem with the last two stories, which are just two episodes apiece. They also feature characters that we have encountered in the series, so there is that sense of continuity. Sasami Sasasegawa is the school princess character that added colour in the main series, but didn’t really develop a storyline of her own. She gets a story here, which is appealing and has an emotional strength to it, but once again it focuses more on her and Riki, although other characters do play a larger part this time. The first two stories stick to the Jacob’s Ladder premise of the main story, but the final story may just take place outside that premise. 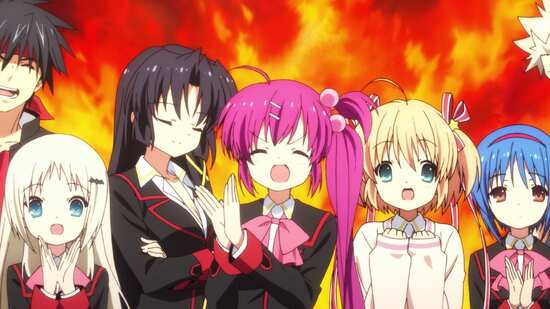 Kanata’s story is the most strongly connected to the series storyline, as it once again looks at estranged, and then reconciled sisters Kanata Futaki and Haruka Saigusa. In the series that relationship was examined more from Haruka’s perspective as a member of the Little Busters. This time it’s examined from Kanata’s perspective, and it adds dimension and emotional resonance to the sisters’ relationship. This story also makes use of most of the regular Little Busters characters, so it most strongly feels like a part of the original story that we didn’t get to see up till now. 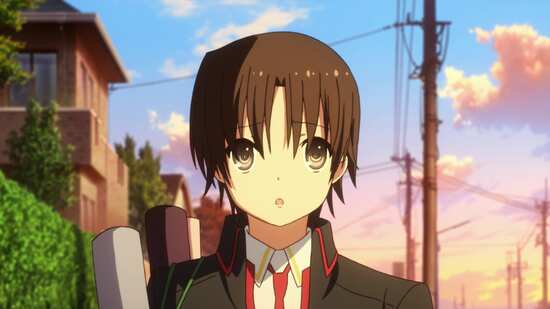 I wouldn’t say that half of this release is wasted, as if anything the Saya Tokido storyline is watchable, and it is entertaining, even if it feels out of step with the show in every respect bar its basic premise. But I did have a sense of waiting for the release to get to the good stuff. Fortunately it does, and while the Sasami storyline is fun if disposable, it at least ties into the earlier series, and Little Busters EX goes out on a high note with the Kanata storyline. If you’re collecting the Little Busters releases, then buying this is a no-brainer. 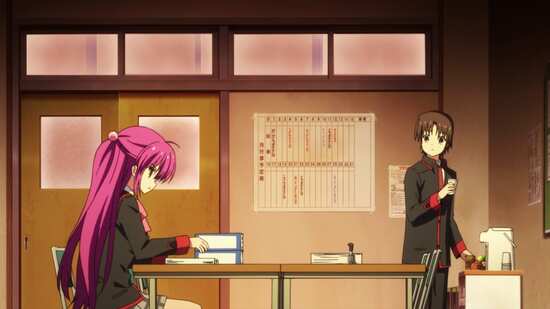 Naturally the Blu-ray is preferable to the DVD as you would expect, but I have to admit that I had a harder time watching this disc. I just couldn’t find the motivation to watch episodes that I knew ahead of time are ultimately inconsequential. They are well put together, and certainly do enough to entertain, but we’re on the borderline between milking a prize cow to exhaustion, and flogging that proverbial dead horse.