There’s a tendency to sigh and roll one’s eyes when another show in an oversubscribed genre shows up. Don’t worry; this isn’t another isekai “lost in a fantasy world” show. But there are more shows than I care to admit in my collection, where a girls’ school suddenly turns co-ed, and a hapless teen male winds up being one of the first boys to attend. He might go there, expecting a harem, only to be beaten down for his perversion, or he might go there expecting to just go to school, and find himself at the heart of group of perverted girls. It’s gotten to the point where the genre was completely subverted in Prison School. On the other hand, Seitokai Yakuindomo comes from relatively early in the genre’s lifecycle, dating from 2010. It’s also a successful franchise, running to two seasons to date, a manga exclusive OVA (18 episodes) and two movies. This collection from MVM gathers the two series and the first movie, and following the anime business script, Sentai Filmworks announced that they had licensed the second movie, after MVM had announced that they would be releasing this bumper collection. 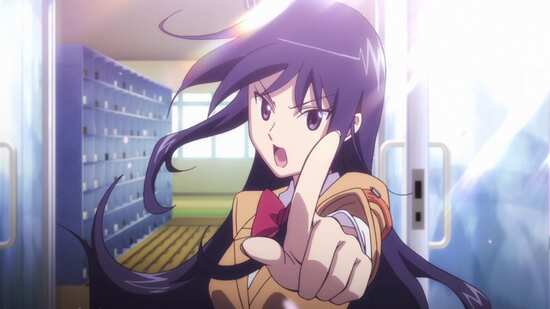 Takatoshi Tsuda chose Ousai Academy as his high school for one reason only; it’s close to his home. The fact that Ousai Academy was a girls’ school up till now, and he’ll be one of the first male students joining it as it becomes co-ed didn’t really figure into his thinking. He certainly had no fanboy expectations of a harem, let alone any interest in relationships. But on his first day, he gets pulled aside by Shino Amakusa regarding the state of his uniform, and gets recruited into the student council in the process. 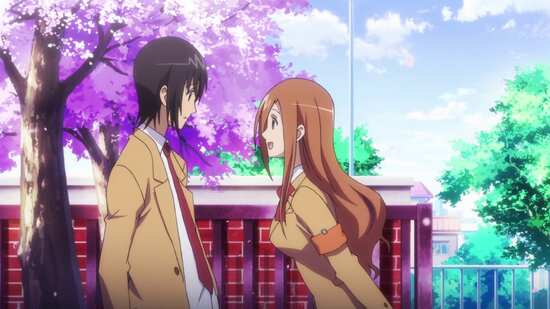 Shino Amakusa is the student council president, and to reflect the new mix of students, she wants Tsuda to be the vice president, which is all well and good. But the enthusiastic Shino is brash, outspoken, and blunt about sex, and quick to make dirty jokes. Aria Shichijou is also on the council, a rich girl with a kindly demeanour, and just as prone to profound crudity, as well as a tendency to forget the key to her chastity belt. In comparison, treasurer Suzu Hagimura has no such puerile obsessions, but she’s quick to fly off the handle, especially about her diminutive stature. With a group like this, Tsuda will be lucky to get any actual student council work done. 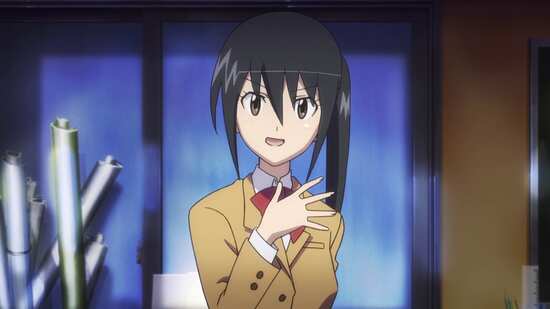 Seitokai Yakuindomo sets a new record for the length of its episode titles. I may as well just write the titles down and not bother with the review. 26 episodes across 2 seasons, and the first movie are presented here across 5 discs.

Season 1 Disc 1
1. Underneath the Cherry Trees/Is This What a Continuation Feels Like?!/For Now How About We Have You Strip?
2. By the Way, Are You an S or an M?/Then Shall We Test That Strength of Yours?/Is This Sparkly Thing Yours?
3. A Wonderful Wrapping Job, If I Say So Myself/President! Please Open Your Yukata More!/You’ve Already Had Your Fill?!
4. That’s Why My Clothing is Sloppy Where You Can’t See/Congratulations/And So I’m Fine From Here
5. Doesn’t Your Butt Hurt?/This is Just From Frustration/I’ve Got to Go to School with Bread in My Mouth, Too!
6. You Can’t Read It, Tsuda-kun! Use It!/If There’s a Catcher You Need a Pitcher!/No, Come Wearing Clothes
7. It’s Steadily Getting Bigger/Tsuda-kun is Boys’ Love
8. Ah?! You’re the Strawberry Panties Girl From This Morning/Pulling Down One’s Virginity May Come in Vogue/I’ll Fight For You All!
9. How Much Will You Pay For Them?/I See! We’re Totally Unrelated!/Venezuela

Disc 2
10. I Saw a Maid! My Lady’s Early Afternoon Obscenity (shortened)/That’s Not in My Character Description/I’ll Be Your Partner, If You’ll Have Me
11. I’ve Never Seen This Physical Phenomenon Before/Should We Put On Underwear, Too?/Santa’s Fetishes
12. Know Some Shame, Like a Normal Person/The Market Price is Half-Stripping for Uniforms/That Wasn’t Your Own Form of Exhibitionism?
13. Goodbye Seitokai Yakuindomo 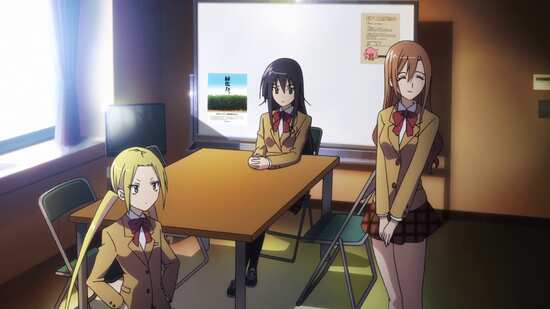 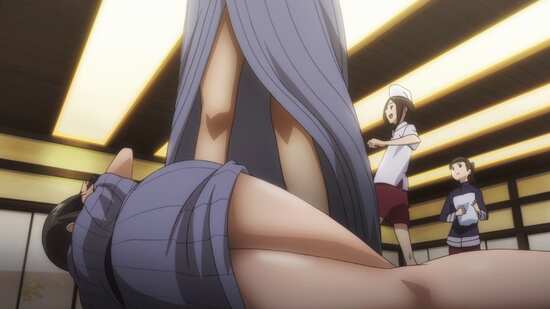 Seitokai Yakuindomo gets a 1.78:1 widescreen 1080p transfer on these discs. It’s a decent enough anime transfer, clear and sharp, bright and colourful as you’d expect from comedy anime, and with nice and smooth animation. Once again, the only nit to pick might be the occasional digital banding, but it’s rarely evident in this show. My immediate impression of this show is ‘tall’, and the character designs have a slender aesthetic that with one exception gives them a little more height compared to other anime. It’s a fairly standard comedy style in other respects, bright and cheery, and not too detailed in the first season. If there’s one positive to the second season, the production values shoot up considerably, in aesthetics and in terms of animation (a judo fight sequence is particularly dynamic early on). The backgrounds suddenly become a lot more detailed, and the show’s style becomes much more colourful and complex. It’s as if the budget just doubled over the season hiatus, although a four year gap between seasons might be another explanation. 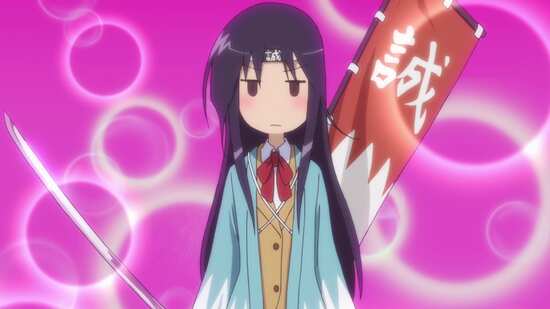 Seitokai Yakuindomo gets a DTS-HD MA 2.0 Stereo Japanese audio track for the series episodes, along with player forced English subtitles. The feature film upgrades matters to a DTS-HD MA 5.1 Surround track. The audio is fine, the character voices work well for their various archetypes (Hata’s deadpan droll is particularly fitting), and the subtitles are accurately timed and largely free of typos. What action there is comes across well through the stereo. The film’s 5.1 track on the other hand is really overcooked, the audio equivalent of an unsubtle 3D movie, with things flying out of the screen left right and centre. The audio placement is very obvious and occasionally jarring, although it’s also a set up for a gag. 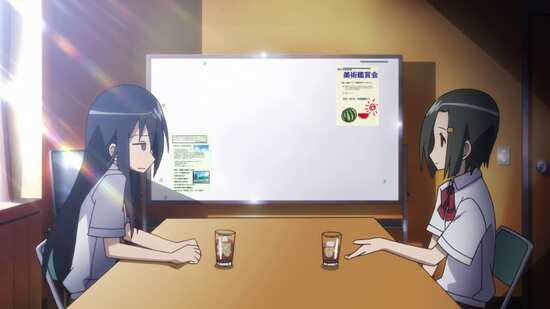 The discs present their content with static menus, and each episode and the movie are followed by translated credit reels.

Disc 2 has the first series textless credits, one of each. 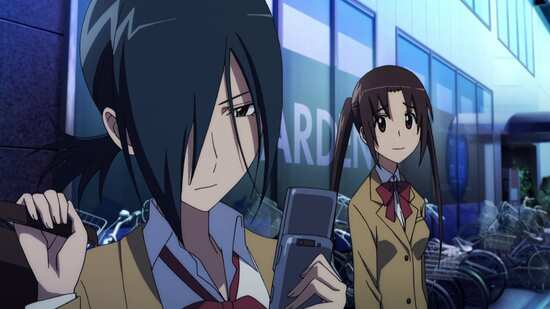 Disc 4 has the textless credits for the second season.

There are also trailers here for Seven Senses of the Reunion, Bloom Into You, Golden Time, and No Game, No Life. 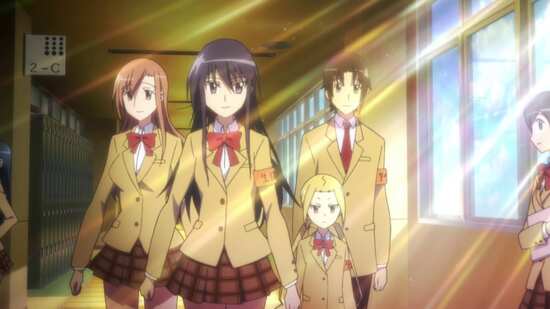 Seitokai Yakuindomo is a tale of two seasons; one quite mediocre and sporadically entertaining, and one growing increasingly unfunny as it progresses. Both seasons, the entire franchise suffers from the same issue, an over-reliance on one main joke, that of seemingly innocent girls being outspoken and utterly frank about sexual matters, much to the chagrin of the sole male protagonist present. That this is the school’s student council, supposedly the paragons of virtue that lack the filter between brain and mouth that everyone else has, is the big punch-line. It works because the ‘victim’ is the only male in the student council, and practically every girl he meets in, and even out of school has a potty mouth and a perverted mind, and his sole purpose is to comment on the absurdity, or provide a comeback. Of course this show couldn’t be made if the roles were reversed, and it was one sole girl among a group of boys. 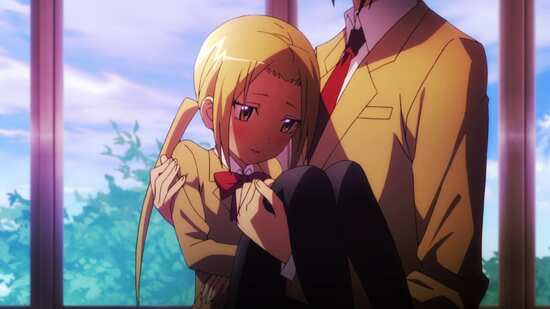 The show comes across as a fast-paced, sketch show format, with little skits and gags, set-ups and punchlines rather than anything approaching an ongoing storyline. Tsuda is the male protagonist, ready to quip at any absurdity. There’s plenty of absurdity in the council, with Shino, the President, enthusiastically illiberal with her topics of conversation, always bringing the subject back to sex, finding innuendo in the most innocuous of statements, forcing it when it’s blatantly impossible. Aria is similar in attitude if not personality. She’s a rich kid who wears a chastity belt, but has a more caring, motherly demeanour. Fortunately for Tsuda there are a few people who match him for innocence. 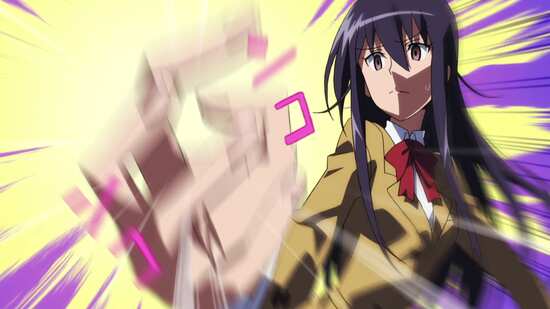 The council treasurer, Suzu is just as weary of Shino and Aria’s routine, but she has a complex about her height (on screen she’s usually represented by the top of her head, and some text pointing it out), and she’s quick to fly off the handle. Yet her height compared to Tsuda gives Aria and Shino plenty of ammunition for comments about fellatio. Outside of the council, there is Mutsumi, who early on wants to start a Judo Club, and while Tsuda and Suzu might be shocked at their perverted friends, the gag here is that Mutsumi is so pure that she never even realises when someone is talking filthy. 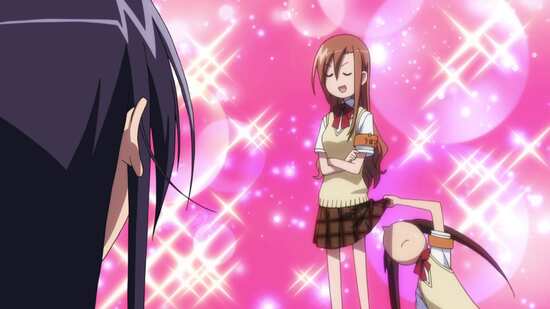 Tsuda can’t even escape this at home, as his sister Kotomi has a similar mindset to the others, is always needling her big brother, and in the second season even starts going to the same school. The Student Council advisor Yokoshima is a teacher obsessed with sex, is a man-eater, and now that the school has gone co-ed, hunting season is open. She’s of an age where she can do the do as well as talk the talk, although her childish side often gets in the way. There’s also Hata, head of the School Newspaper Club, who’s always got her camera ready, looking for a scoop, blackmail in her back pocket should she need it, and an ability to twist innocuous interviews into innuendo. In the second season we meet the student council president of another school, in an exchange program, and she’s just as perverted. 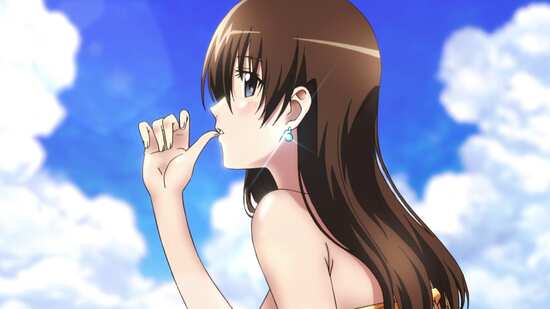 I found the first season to be sporadically funny. It’s a fast paced format to be sure, and there was enough in there to make me laugh out loud a few times each episode. Ironically, it was when it moved away from the sex jokes that I laughed the most, usually at a Suzu’s height gag, a Mutsumi scene, or another deadpan Hata moment. But even the sex stuff was funny, especially early on. There was a bit of shock value to the way they spoke, and even the sex toys in the opening theme animation were front and centre. 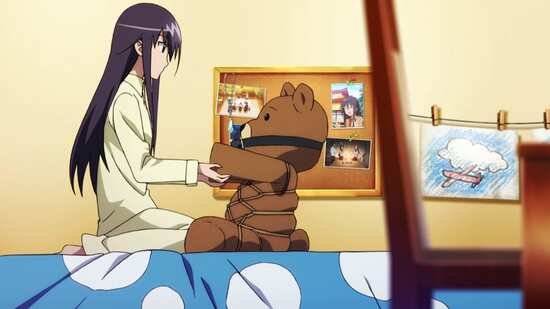 Something happened between the first and second season though. It could be that Sentai just couldn’t get the materials for the second season, but I suspect that the show just got really popular with the first season, which resulted in that obviously increased animation budget. With that budget probably came an earlier time slot, and now much of the characters’ perverted dialogue is bleeped out, and suggestive imagery is mosaiced in a way that the first season avoided. It actually makes it harder to watch when you have to use your imagination to fill in what is being said. Chances are you’ll get it wrong and create a completely different joke. (It’s notable that the same title sequence is used for the second season and the movie, and the sex toys are obscured in the TV opening, but not in the movie opening). What makes this harder is that the focus turns even more on the filthy innuendos in the second season, with the other humour diminished. The sketch show format is built on, with a few regular gag segments across the episodes, but the end result of this is that pretty though the show now is, I laughed a lot less. 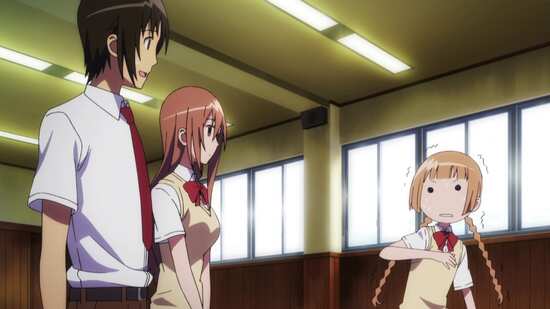 You’ve all probably got one of those friends with a one-track mind. You know you need a break from them every once in a while, a little breather from whatever they’re obsessed with. Seitokai Yakuindomo is one of those friends. It works best in small doses, not a binge, and while the second season and the movie may be the prettiest, it’s the first season which is the funniest.