If you’ve read my reviews, you’ll know that my head can be turned by any strange triviality when it comes to the shows and movies I take a punt on. Right now, I wouldn’t blame you for thinking that I bought Bungo Stray Dogs because it shares a name with my second favourite womble. Normally, you’d be right, only this time I read the blurb behind the show as well, and knew full well its premise about a detective agency with supernatural powers, and a literary connection. That sounds like it’s jumping on the Blood Blockade Battlefront bandwagon, a show that I have a lot of time for. It’s different enough from Manga/Funimation’s usual, current output to make it worth spending some time and money. Other than that, it’s another total blind buy, as I didn’t have the time to catch it on Crunchyroll. 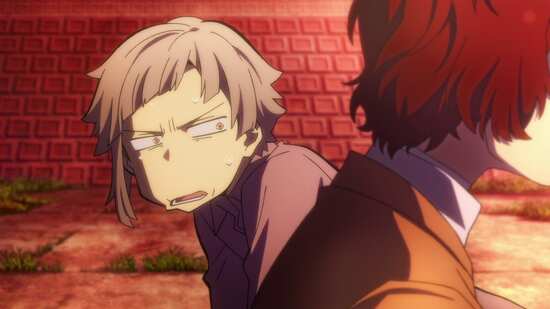 Atsushi Nakajima is cursed with bad luck. He’s an orphan who’s been kicked out of the orphanage, has been living on the street, gradually starving thanks to his unwillingness to steal. And he’s being pursued by a giant tiger. Then one day, he rescues a man named Osamu Dazai from the river, only to be faced with ingratitude for preventing a suicide. But Dazai perks up when he hears about the tiger. For Atsushi isn’t being pursued... he is the tiger. He’s one of those few people that manifest supernatural abilities, and his is to transform into a tiger. But as yet he doesn’t have any control over the process. The downside is that he’s being pursued by the authorities. 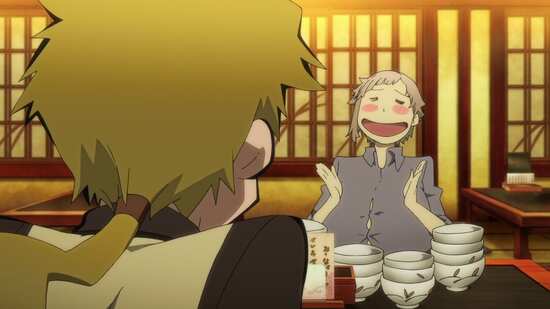 But Atsushi would be the perfect recruit for the Armed Detective Agency, an agency where the employees all have supernatural abilities, and are called on to deal with those cases that the regular or the military police cannot handle. But his life may not have gotten any easier. For there are people who want the ‘Weretiger’, the criminal Port Mafia group, and they have abilities as well. 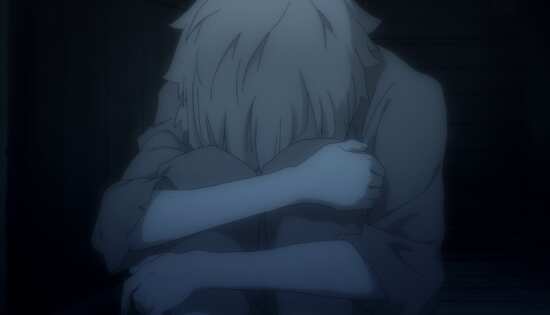 This collection gathers Seasons 1 and 2 of Bungo Stray Dogs, as well as the OVA episode.

1. Fortune Is Unpredictable and Mutable
2. A Certain Bomb
3. Yokohama Gangster Paradise
4. The Tragedy of the Fatalist
5. Murder on D Street
6. The Azure Messenger
7. Love For the Disease Called Ideals
8. Teaching Them to Kill; Then to Die
9. The Beauty Is Quiet Like a Stone Statue

Disc 2
10. Rashoumon and The Tiger
11. First, and Unsuitable Profession for Her, Second, an Ecstatic Detective Agency
12. Borne Back Ceaselessly Into the Past 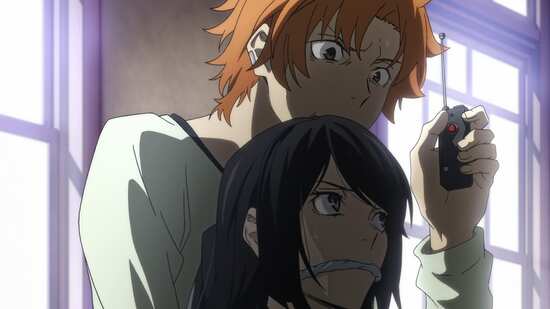 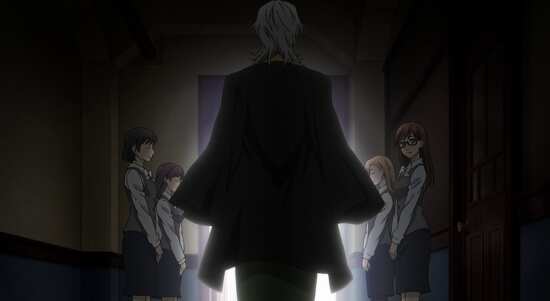 Bungo Stray Dogs gets a 1.78:1 widescreen 1080p transfer on these discs. It’s a very nice transfer that does the animation justice. The image is clear, detail levels are good, and colours are rich and consistent. There’s no visible sign of compression, and the digital banding is rarely noticeable. It’s an excellent world design, with some very cute cinematic touches. Against this, you might expect the stylised character designs to seem out of place, but it all works together really well. This is a quality animation, as you might expect from Studio Bones. 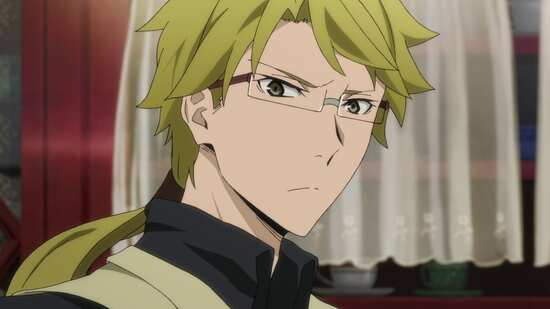 Bungo Stray Dogs offers Dolby TrueHD 5.1 Surround English and 2.0 Stereo Japanese with translated subtitles and a signs only track, locked during playback. I was happy with the Japanese audio, with the subtitles accurately timed and free of typos. The action comes across well through the stereo, the actors are suited well to their roles, and Taku Iwasaki’s music is a delight as always. There is some serious production value to the audio design that really elevates the show. 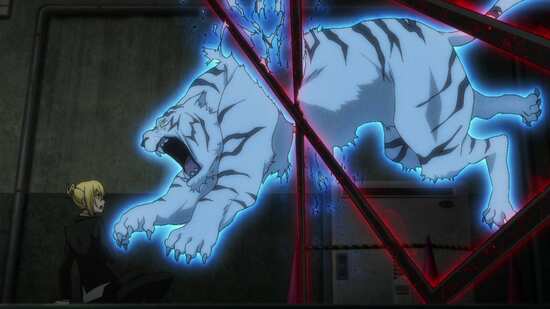 You get 4 discs in a BD Amaray case, one either side of two centrally hinged panels. There is an o-card slipcover repeating the sleeve art, and the sleeve is reversible. There is a digital copy should you require it. The discs boot to animated menus. 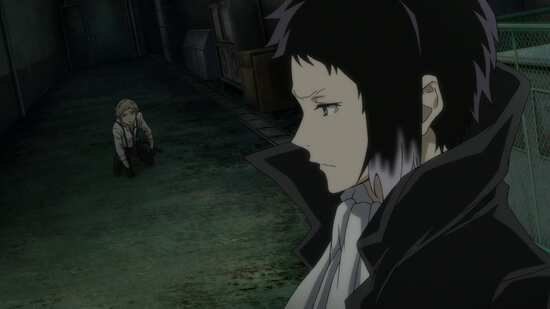 Season 1 Disc 1 autoplays with a trailer for Funimation Now.

Disc 2 has the following extras. 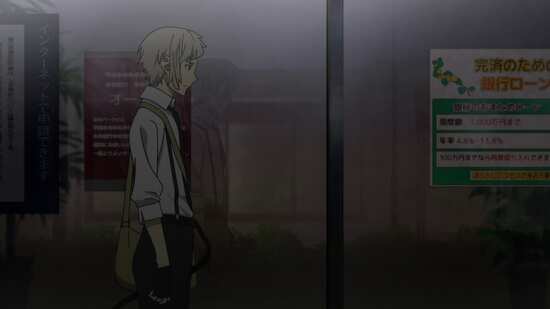 Season 2 Disc 1 autoplays with a trailer for Funimation Now.

Season 2 Disc 2 has the following extras. 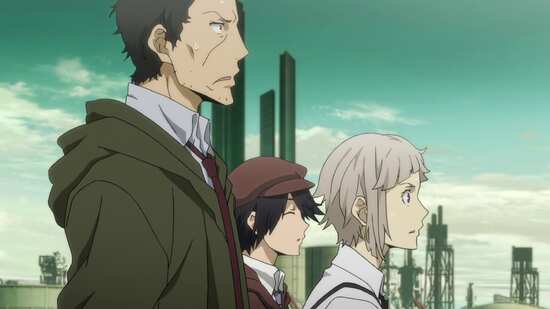 Bungo Stray Dogs is a really good show, with great characters, a compelling premise and a very well executed story, and it’s got one major problem, a problem it advertises itself on these discs. That’s the trailers for Blood Blockade Battlefront, a show with a very similar premise, but which executes even better than Bungo Stray Dogs. Quite frankly it’s easier for me to recommend Bungo Stray Dogs to anyone who hasn’t seen the other show, as comparisons are inevitable, and invariably detrimental. That’s unfair, as Bungo Stray Dogs is a very impressive show in its own right, but there we are. 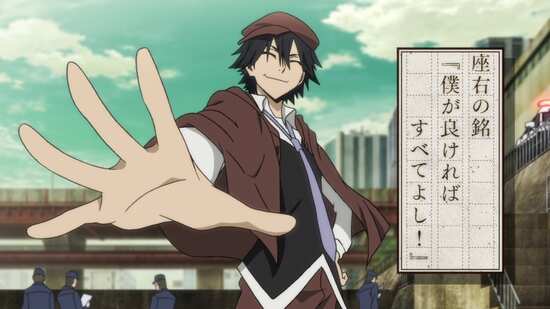 There is one significant difference though, there’s no collision of two worlds in Bungo Stray Dogs; it all takes place in this world, and there aren’t too many monsters or weird situations; the show has a more sedate pace and never gets as wacky; but once again, I really shouldn’t compare the two. 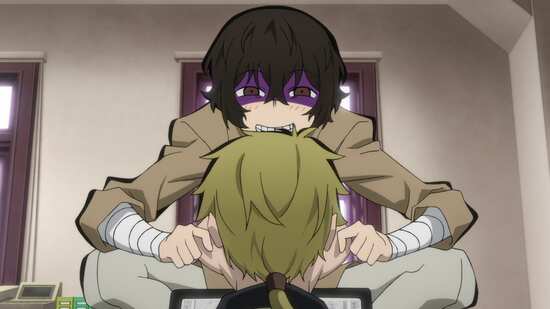 Bungo Stray Dogs takes place in a world of “The Gifted”, where certain people manifest supernatural abilities. Set in the port city of Yokohama, naturally a power struggle ensues, with the government trying their best to regulate these abilities. The Port Mafia are a criminal group, while the Armed Detective Agency is a lot more benign, trying to help people. Yet the two groups have much in common, not least Dazai of the detective agency, whose own past took him down some dark paths; although his constant quest for a painless suicide predates even that. 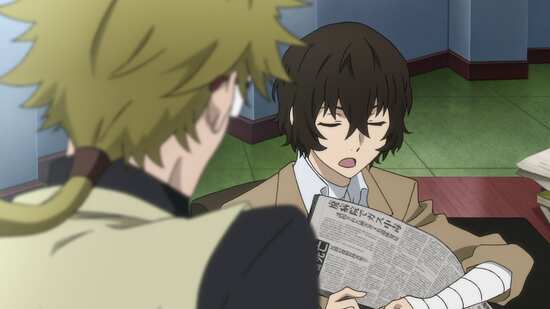 The protagonist of the show, Atsushi Nakajima manifests the power of a tiger, which has the authorities hunting him, tracking his trail of carnage. The Port Mafia want to collect the substantial bounty on the ‘weretiger’, which leaves the Armed Detective Agency as the only organisation authorised to employ people with abilities, and remove them from the watchful and occasionally discriminatory eyes of the authorities. In other words, the police will stop hunting him if Atsushi joins the agency. The agency will also help him control his power and put it to constructive use. 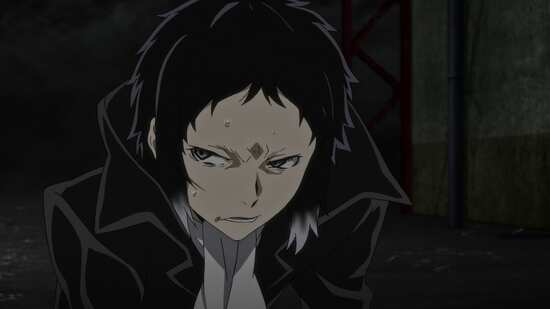 The first season covers the clash between the Agency and the Port Mafia as they squabble over who possesses Atsushi, and given his past, there are plenty of layers of interactions between the members of the Port Mafia and Dazai in particular. The second season introduces The Guild, a foreign group of Gifted, and the people who put the bounty on Atsushi to begin with. They arrive with the arrogance of the outsider, justified with their group of powers, and set about stamping their mark on Yokohama, making enemies of both the Port Mafia and the Armed Detective Agency. The end of Season 2 reveals a new antagonist which no doubt will feed into Season 3 as well. 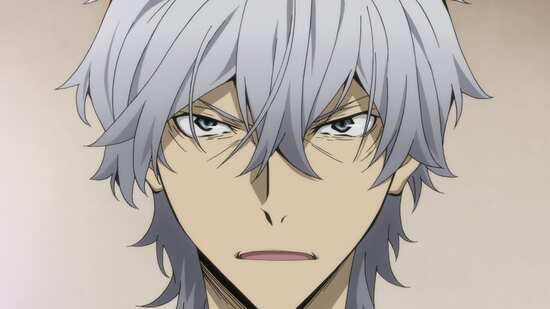 All of the ability wielders share names with famous authors, and literary allusions abound in the show, one of its selling points. This has even more impact for Western audiences in season 2, as The Guild are mostly of American origin, making characters like Melville and Lovecraft, and especially their powers particularly effective when it comes to references that land, while the Poe and Rampo half episode is particularly cute. Season 2 is a little deceptive at first though, having set up and told a big chunk of the story in season 1, season 2 begins by flashing back to Dazai’s past, and we get a whole run of four episodes set years previously, apparently ignoring the big cliff-hanger at the end of Season 1. For a moment I did think that the whole of Season 2 would be set in that past era, but the story does eventually resume. It is a little clumsily placed as a flashback sequence of episodes though. 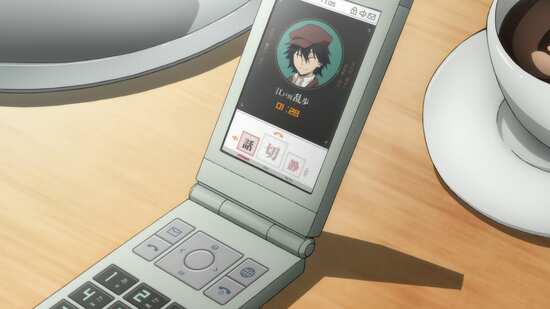 Another thing that is weak about Bungo Stray Dogs is the sheer abundance of characters. It approaches character overload at times, and there are individuals who just aren’t developed sufficiently, or make enough of an impact to really resonate, or engender any emotional attachment. Although I recall that Blood Blockade Battlefront had the same issue. And we’re back to where I didn’t want to be, comparing the two. 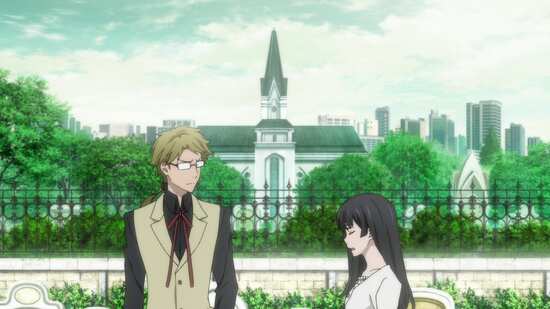 Bungo Stray Dogs is a really good action adventure, with a great story and a variety of compelling and quirky characters. It certainly held my attention, and entertained me with its various twists and turns, the smart way with which its story unfolded. About the only real nit I had to pick with the narrative was the frequency that Atsushi would indulge his orphan Annie flashback every time his confidence was knocked. You can guarantee the appearance of a blue-tinged abusive orphanage administrator at least once an episode. Hopefully with the way Season 2 concludes, Atsushi has enough confidence in himself for those flashbacks to be absent henceforth, but it is a small nit to pick in an otherwise very impressive show. It still had Manga Entertainment’s logo on the packaging, but this is Funimation quality through and through; you’ll know what to expect.