I’ve been attracted to another anime show on the strength of the title alone. I don’t know why it is, although it’s certainly not the infinitely long titles of shows adapted from isekai light novels that spark my interest. But there is something provocative about a show called Teasing Master Takagi-san. You can certainly imagine what a show with that name might be, even if the actual thing might be something completely different. I had the same reaction to Attack on Titan. I may have gone into it expecting a futuristic sci-fi, but instead got something akin to a mediaeval fantasy, but I certainly wasn’t disappointed by the experience. Teasing Master Takagi-san turned out to be completely different from what I was expecting, but it took me one episode to be hooked anyway, one episode to see it as something of a mirror image of Tonari no Seki-kun. The shoe is on the other foot now... 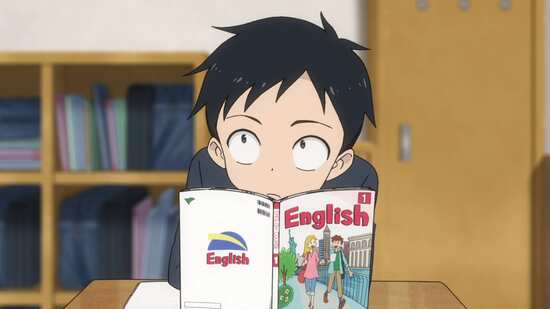 They say that if a girl teases you in school, it means that she really likes you. But there’s a limit to what a boy can take. Takagi takes every opportunity to needle Nishikata, to the point where Nishikata’s verbal reactions are getting him in trouble with the class teacher. He’s decided to get his revenge, and tease Takagi in turn, but she’s a master at this, and in the face of the blushes she causes, Nishikata doesn’t have a chance. 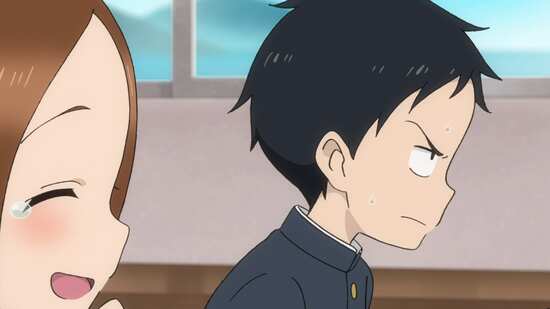 Twelve episodes of Teasing Master Takagi-san are presented across two Blu-rays from Funimation. 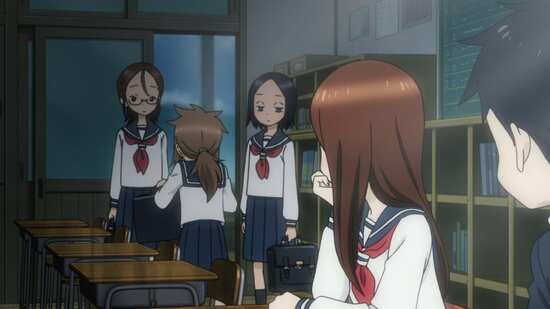 Teasing Master Takagi-san gets a 1.78:1 widescreen 1080p transfer on these discs. It’s another solid anime transfer, clear and sharp, with rich and consistent colours. The only issue is the usual digital banding that you get with anime, although you’ll only rarely notice it with this show. It’s a light comedy after all, with no need to get dark or dramatic. The character designs are appropriate to the age of the cast, cute and childlike. The animation is smooth and accomplished well, while detail levels are good, despite the simpler visual aesthetic. 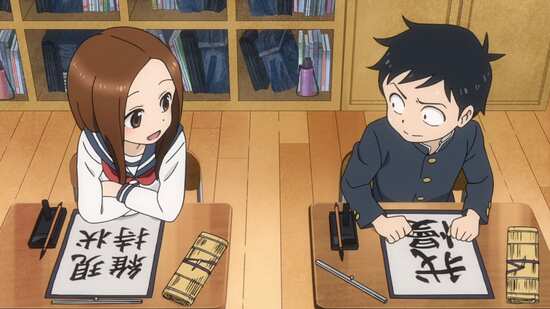 Teasing Master Takagi-san offers the choice between Dolby TrueHD 5.1 Surround English and 2.0 Stereo Japanese, this time with optional translated subtitles and a signs only track. I was happy with the Japanese audio, with the character voices strong in a dialogue heavy piece. What action there is comes across well in the stereo set-up, while the music suits the story well. There are several end themes for this show, which is why I was surprised at the lack of textless credits in the extras. This is also the second time I’ve seen someone “peddle” a bicycle in anime subtitles (here in episode 6). Sometimes, relying on spell-check just isn’t enough, and a basic education in definitions would be useful. Just to confirm, the character was riding a bike, not selling it. Otherwise the subtitles are accurately timed and free of typos. 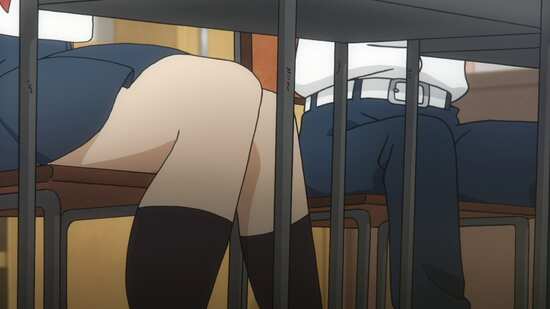 You get two discs, one on each inner face of a thin BD Amaray case with a reversible sleeve in this Essentials release. There is also a digital code leaflet. Each episode is followed by translated credits and the discs boot to static menus.

Disc 1 autoplays with a trailer for Cardcaptor Sakura. 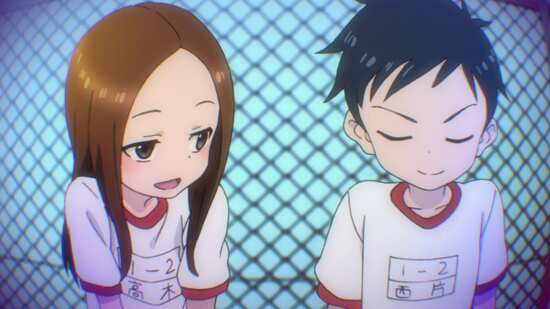 Disc 2 autoplays with a trailer for Konohana Kitan, and on the disc you’ll find more trailers for ReLife, Animegataris, Sakura Quest, Tsukigakirei, and Dagashi Kashi Season 2.

What’s surprising is that this show doesn’t even get the usual textless credits. 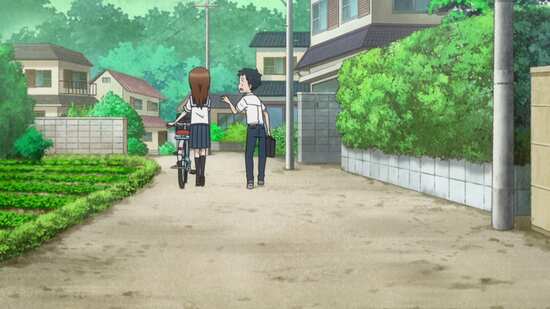 In the end, this doesn’t turn out to be the riposte to Tonari no Seki-kun that I was expecting. That was an utterly surreal, short form anime, where the whole point was the frustration felt by the show’s protagonist, as she gets distracted in class by the ridiculous flights of fancy her desk neighbour Seki gets up to as he avoids being educated. It’s basically a one-joke affair, but fortunately that joke is good enough to hold through the series. Teasing Master Takagi-san on the other hand is a more character focused affair, with something more of a narrative arc to it, a year following Nishikata and his desk neighbour in and out of school, and it’s very much the interaction between the two that drives the story. 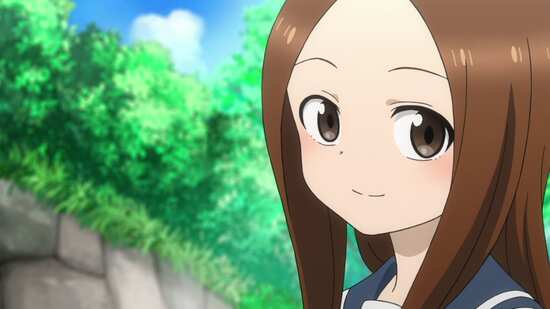 It does still feel like a short-form anime, even though each episode is the full 25 minutes, as the episodes are divided into mini-story arcs, or sketches even, as the heavily back-slashed episode titles suggest. And it is a middle school love story, with characters at an age where teasing equals love, and where boys aren’t quite mature enough to know what that means. Nishikata’s life is made a comparative misery by the gentle teasing that Takagi continues to apply. It’s made even worse at an early point, when for some reason Nishikata decides to do push-ups each day for each time that Takagi manages to tease him. His life revolves around the desire to tease her back, but one, he’s no good at it, two, he blushes far too easily, and three, his extreme reactions keep getting him in trouble with the homeroom teacher for disrupting the class. 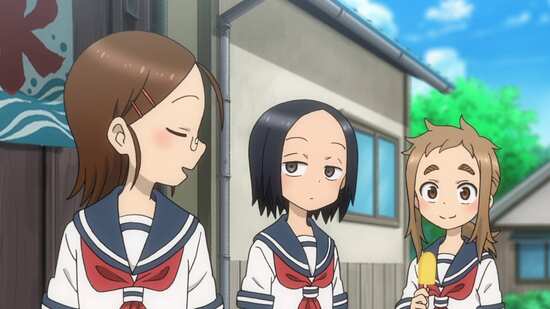 It’s all good natured teasing from Takagi, who obviously likes Nishikata, and it’s never mean enough to cause him any distress. It never gets to the point that he wants to walk away, or avoid her, and even when he has the opportunity, he chooses to hang out with her, although he tells himself that it’s for that chance to tease her in turn. And it takes him most of the series to realise that he actually likes her. It’s a really sweet and effective relationship that develops, heartfelt, warm and most importantly fun. 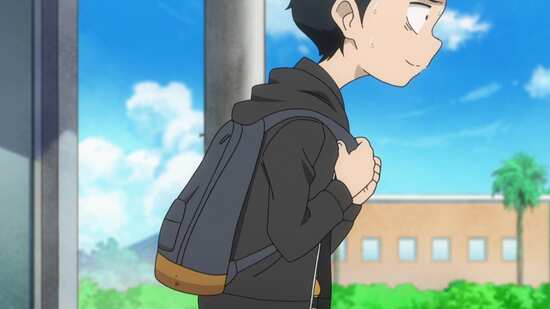 Teasing Master Takagi-san might seem like a thin premise, but there is a little more to the show, as we get to meet some of the other kids in the class as well, including Nishikata’s friends. But the heavy, interleaved lifting comes from a trio of friends, the fun Mina, her quirky friend Sanae, and her level-headed friend Yukari, and the Takagi-Nishikata moments are usually broken up with sketches featuring these three friends. 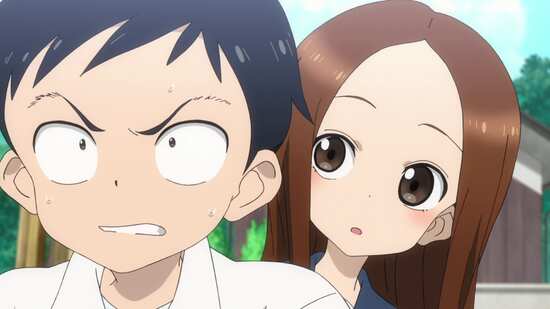 This is basically school related stuff, although when the holidays arrive, there’s plenty of hanging out together outside of school as well. It’s things like cleaning duty in class, summer uniforms, swimming classes, sharing an umbrella, catching a cold, studying for tests, riding a bike, going shopping, all simple aspects of school-age life, all of which offer plenty of opportunities for Takagi to make Nishikata turn bright red. 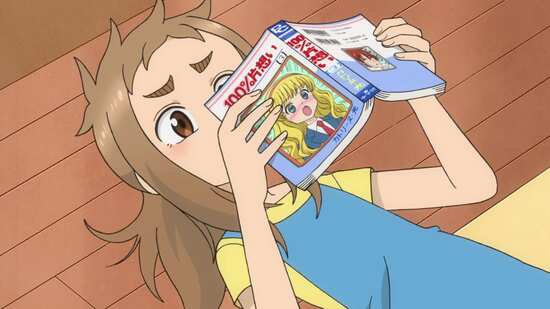 It’s all light, ephemeral stuff, the typical elements of a slice-of-life show, except that there is that gentle romantic element to the relationship between Takagi and Nishikata, and there is some character development as the series progresses. It’s a delightfully unchallenging show, very enjoyable, with great and very likeable characters. It would be so easy for someone like Takagi to cross the line into annoying, but she also maintains a vulnerability and warmth throughout. Teasing Master Takagi-san is just a very enjoyable show. 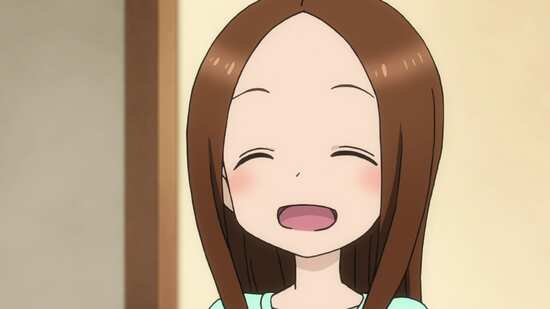 Funimation are selling this as the Complete Series, but there is actually a second season to the show, and also dubbed into English. It’s a Netflix exclusive at the time of writing, so who knows when we lesser mortals will ever get to see it?