The Hands of Orlac 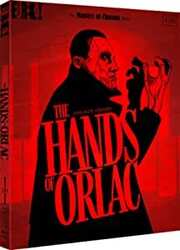 Synopsis:
Reuniting the star and director of Das Cabinet des Dr. Caligari, The Hands of Orlac Orlac’s Hände] is a deliciously twisted thriller that blends grand guignol thrills with the visual and performance styles of German Expressionism.

Based on a novel by medical-horror novelist Maurice Renard, it charts the mental disintegration of a concert pianist (Conrad Veidt) whose hands are amputated after a train crash, and replaced with the hands of an executed murderer. When Orlac’s father is murdered by the dead man’s hands, Orlac begins a steady descent towards madness.

The Masters of Cinema Series is proud to present The Hands of Orlac for the first time on home video in the UK in a special Blu-ray edition.

Alternate presentation of The Hands of Orlac[SD, 110 minutes] – Courtesy of the F. W. Murnau Foundation, a presentation of the film struck from a different print source, featuring alternate takes of certain scenes. Includes a musical score by Paul Mercer

PLUS: A Collector’s Booklet featuring new writing by Philip Kemp, and Tim Lucas