When the first Wonder Woman film came along, it was actually pretty good, and offered a modicum of hope that the DC Universe had turned a corner. It’s true that I did find a whole lot of similarity between it and the first Captain America movie, but that didn’t stop it from being enjoyable and entertaining in a way that the dour Man of Steel and Batman v Superman movies weren’t. But then the DC Universe turned right back around that corner with Justice League, perhaps the worst film yet from the franchise. It’s ironic really that as the second Wonder Woman film comes out on home video, it’s Zack Snyder’s new Justice League cut that is taking all the headlines, although some might think that’s a blessing in disguise; Wonder Woman 1984 didn’t garner the highest of praise when it was finally released to cinema and streaming at the end of 2020, following almost a year worth of delays down to ‘you know what’. 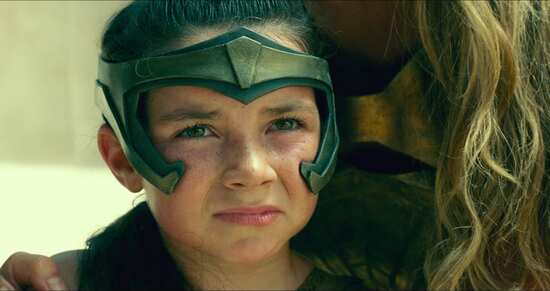 It’s been over sixty years since the events of the first film, sixty years since Wonder Woman a.k.a. Diana Prince saved the world from the machinations of Ares, and lost her true love Steve Trevor. Now she works at the Smithsonian by day, and secretly helps people as Wonder Woman. It’s 1984, and the big fad is the Black Gold Cooperative, a company run by ambitious entrepreneur Maxwell Lord, offering investors big returns on the oil business.

The world changes when an ancient crystal arrives at the Smithsonian for analysis by Diana’s timid new friend, Barbara Minerva. What looks like a cheap rock is far more than that. It’s the mythical Dreamstone, which legend has it can grant wishes. This has unforeseen consequences when Diana makes an idle wish, and changes Barbara in ominous ways when she wishes to be like Diana. But Maxwell Lord has long been seeking this gem, to turn his Ponzi artifice of an investment scheme into reality. The Dreamstone has two sides. It may grant someone’s fondest desire, but it always exacts a price in return, and in Maxwell Lord’s hands, its powers run out of control.

Wonder Woman 1984 gets a 2.40:1 widescreen 1080p transfer with the choice of Dolby Atmos and Dolby Digital 5.1 English, along with DTS-HD MA 5.1 Surround Italian, and DD 5.1 Mandarin and English Audio Descriptive. There are subtitles in these languages and Danish, Finnish, Norwegian, and Swedish. I say 2.40:1 aspect ratio, but this film is one of those with variable frame rates for IMAX presentation, which on this disc means opening up the frame to 1.85:1 on occasion. I’ve become so inured to this that I tend to miss it when it happens. It’s not a transfer to pick nits at. The image is clear and sharp, pixel perfect, with great colours and no sign of compression or the like. The audio is nice and immersive, keeping the dialogue clear (except for a couple of impenetrable accents), making the most of the action sequences, and bringing back Hans Zimmer’s great, if un-hummable score. The original Wonder Woman had its issues with obvious CG, especially to recreate its WW1 setting, but there is a lot less of that in the sequel. They used a lot of wirework to accomplish the stunts and action practically, and the reality of it comes across on screen.

You get one disc in a BD Amaray case, wrapped in an o-card slipcover. The disc boots directly to an animated menu.

On the disc you’ll find the following extras.

This is a mix of informative behind the scenes, and silly goofing around, but the extras are all worthy additions to the release. The Making Of has excerpts of scenes not in the final film, which make the omission of Deleted Scenes a little odd though.

I really enjoyed Wonder Woman 1984; certainly a lot more than the reviews I’ve read might have suggested, and really even more than many other comic book movies I’ve seen of late. I had to give my expectations a kick before I did though, reminding myself that comic books aren’t just about sci-fi and fantasy, they’re also about magic and mythology as well, the arenas in which the two-film Wonder Woman franchise seem more comfortable. It’s not even as if comic book movies have avoided these areas in the past. Wonder Woman 1984 with its magical maguffin, and its oil plotline calls back to Superman III and Supergirl (throw in a bit of Superman IV as well), although they may not be the best examples to cite. Either way, Wonder Woman 1984 is better than both of those films. Above all, this film offers something that I rarely see in films of this genre; it’s a morality tale with a very strong and meaningful message for its audience.

Given the trailer, it’s no spoiler really that Steve Trevor returns to the franchise, despite my assumption with the previous film that the character was done. Given the storyline, you don’t need to guess at just how he returns, and there is a lot of vicarious fun to be had in seeing a man from 1918 discovering the futuristic world of the eighties, and there’s plenty of culture clash fun to be had as well. But it also satisfies an important emotional arc in the film. When we first encounter Diana Prince, she has her day job at the museum, and saves people on the sly, trying not to be noticed as Wonder Woman, but really she’s isolated from the world, and from her apartment we can see that she never really got over losing Steve Trevor, never having had the chance to say goodbye. That relationship needs to be resolved.

Then there is Barbara Minerva, a mousy, clumsy and awkward scientist when we meet her, a gemmologist recently hired by the Smithsonian, but someone who finds it hard to make an impression, despite all her good intentions. She does manage to form a friendship with Diana although both find something to envy in the other. And when someone is as strong and as confident as Diana Prince, it’s hard not to see why Barbara would want to be like her.

Finally there is Maxwell Lord, TV personality extraordinaire, selling dreams of wealth and prosperity on the back of the promise of black gold, having invested in land all over the country in the hope of finding oil there, after all the oil companies have been and gone and discounted the land as worthless. It’s a confidence trick of sorts, only one that he himself believes in. He wants to be a success, to make his young son proud, and he continues to sell the artifice, even as the bottom continues to fall out of his world. He gets more and more desperate to achieve success.

These would all be pretty innocuous dreams, only the Dreamstone shows up, a movie maguffin if ever there was one, but one that makes sense in Wonder Woman’s world of ancient gods and lost myths. Diana wishes for Steve Trevor, Barbara wishes to be like Diana (of course not knowing about any of the superpower stuff), but the greatest malice comes from Maxwell Lord, who has actually researched the Dreamstone, knows about its powers, and has his precise wish to make his dream a reality in mind. When he gets his hands on it, it starts a chain reaction that spirals out of control. Because as is mentioned in the film, the Dreamstone is like the fabled Monkey’s Paw; it grants wishes, but not exactly in the way the wisher intended, and then only after exacting a painful price.

That’s the allegory of course, the morality tale that Wonder Woman 1984 wishes to impart. It may come with a healthy dose of nostalgia for the ‘decade that taste forgot’ but its story is directly aimed at modern audiences, our societies where the desire for instant gratification, and the pursuit of fame, and the acquisition of wealth, property and objects is more of an imperative than ever. Granting wishes exacts a toll on those making the wish in the film, and it’s easy to equate that to humanity’s collective greed exacting a toll on the world in general. It’s an important message, and it’s imparted really quite smoothly in the film. It’s also nice to see a comic book film where mass death and destruction along with a CG overload isn’t part of the make-up. This is about people making mistakes, and finding ways to either correct those mistakes, or learn to live with them. There doesn’t have to be collateral damage when it comes to personal growth, although that doesn’t limit the spectacular action sequences and stunts.

If I do have a nit to pick with Wonder Woman 1984, it’s with its portrayal of the era. It’s a problem that it has in common with X-Men Apocalypse, which did something similar, and a couple of other period pieces that I have seen of late. The eighties was a strange time when it came to pop culture. The pace of change was insanely fast; fads and styles came and went, seemingly in weeks. It seemed like each year was a decade in and of itself, so dense and rich was the culture. Yet Wonder Woman 1984 seems to pick and choose from across the decade and just jam it all together, throwing most of its production design effort into populating a neon coloured mall with a host of extras in random eighties’ attire. This much is a nitpicker’s delight, and I’m sure the list of anachronisms spotted in the film in the IMDB goof selection will only grow. Then again, I didn’t feel the need to nitpick any 1947 movies back in 1984, the way I’m nitpicking this one now.

Wonder Woman 1984 is a lot better than it’s been given credit. It’s an entertaining and colourful action adventure that has an important message to impart. It doesn’t dwell on the mechanics of the maguffin, and it may have a few plot holes and inconsistencies, but the emotional core of the film is strong, and the way the characters grow and develop is done really well. And it turns out you can have a superhero comic book movie without a moustache twirling super-villain antagonist, without losing any of the fun. The Blu-ray is top-notch as you would expect. Give Wonder Woman 1984 a try, you could be pleasantly surprised.