Blade and Soul may not have hit the sweet spot, but I have higher hopes for Black Bullet. It’s probably the final Animatsu back catalogue title that I feel I’ve missed out on (I doubt I’ll stoop as low as to watching Triage X anytime soon), although I must admit that I couldn’t have picked a worse time to catch up on it. It begins after all with a viral pandemic raging through the world in the year 2021. I really do know how to pick them! Anyway, that little Animatsu gap may be plugged, but it’s nothing compared to the 2020-21 anime home releases that I’ve missed this past year. It’s probably not that many when you screen out all the fan service and the isekai shows... 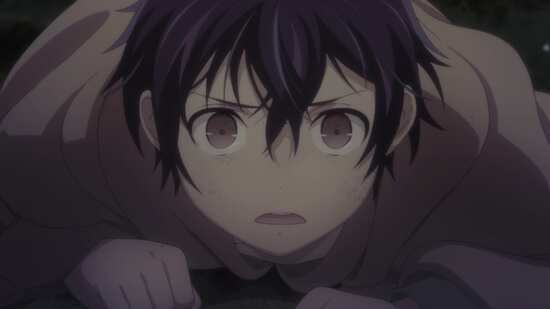 In the year 2021, humanity faced near extinction from the Gastrea virus. This insidious disease causes mutations, and the advent of giant, horrific animals, animals that use humans to reproduce, infecting them with Gastrea and causing them to mutate in turn. Ten years later, what’s left of humanity survives in enclaves like Tokyo, created following the discovery of the Varanium metal, whose magnetic properties can repel Gastrea and the resulting mutants. Tokyo is now surrounded with giant monoliths of Varanium, and to deal with the Gastrea that gets through, there are the Promoter and Initiator teams of the Civilian Security Agencies. 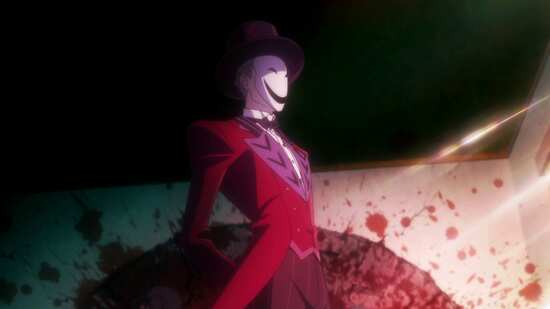 When Gastrea infected pregnant women, they gave birth to mutant daughters, the Initiators, who have powerful abilities and are able to fight the mutants, but they have to watch the infection level within themselves lest their corruption takes over and they become mutants too. The Promoters fight alongside them, skilled humans who also have access to the drugs to keep their partners from mutating. Rentaro Satomi and Enju Aihara are one such team who work for Kisara Tendou as part of the Tendou Civilian Security Agency. But they aren’t seen as heroes; far from it, as the Initiators are also known as The Cursed Children, and shunned by the populace. 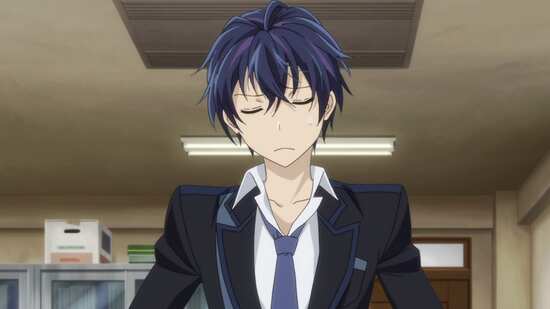 13 episodes of Black Bullet are presented across two Blu-rays from Animatsu.

Disc 1
1. The Last Hope
2. The Mask of Madness
3. The Children of Fate
4. Black Bullet
5. The Crimson Black Assassin
6. Tragic Irony
7. The Still Moonlit Night, The Sky at Dawn
8. The Monument on the Border
9. The Guardian of the Barrier 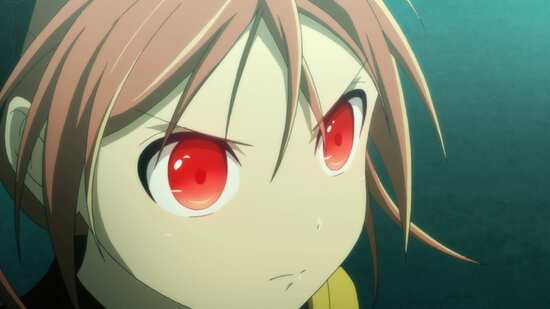 Black Bullet gets a 1.78:1 widescreen 1080p transfer on these discs. The image is clear and sharp, the playback is smooth bringing that animation across without significant issue, aside from the banding that is to be expected with TV anime on Blu-ray. This being a higher quality animation, with a lot more in the way of atmosphere and nuance of shading, banding is a little more prevalent than something simple, like say a harem comedy, but it’s still very watchable. The character designs are pleasant and likeable, with plenty of cute girls to sate that particular fanbase. The world design comes across well with plenty of detail, while the animators really let their imaginations run riot with the Gastrea mutants. It’s a solid performance from Black Bullet. 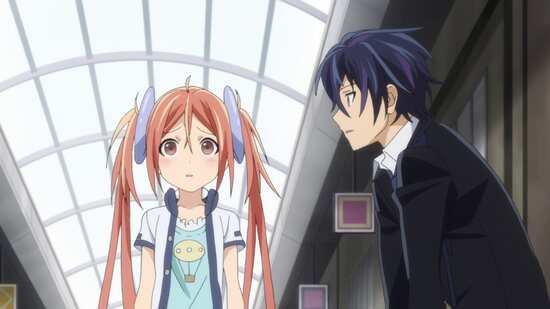 You have the choice between DTS-HD MA 2.0 Stereo English and Japanese, with subtitles and signs locked during playback. There’s nothing to worry about here. Certainly the Japanese audio that I stuck with, did what it needed to get the action across and the effects and music. The dialogue is clear throughout, the subtitles are accurately timed and free of typos, and the actors are suited to their roles. 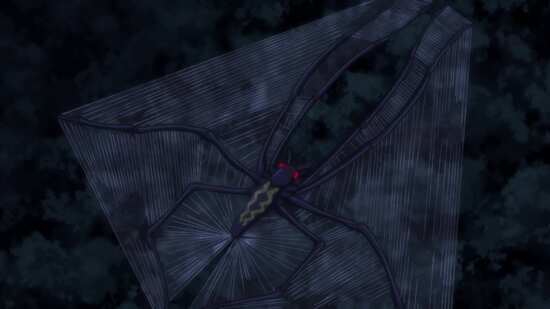 You get two discs in a BD Amaray, one on a centrally hinged panel. The reversible sleeve has some artwork and an episode listing on the inner side. The discs boot to static menus. 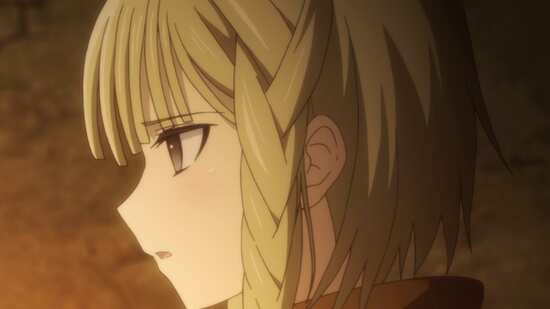 Disc 2 has the textless credits, one of each, and trailers for Vampire Hunter D, Knights of Sidonia, Hamatora the Animation, and Brynhildr in the Darkness. 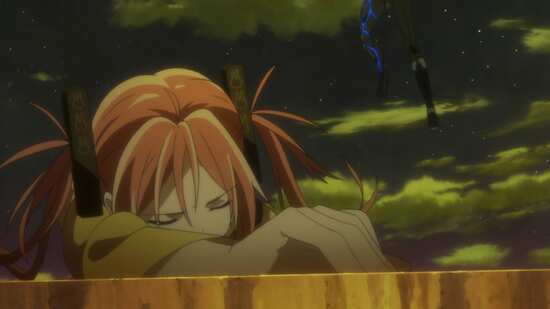 I’m torn between seeing Black Bullet as mediocre, or slightly above average. It’s okay, it’s watchable, and I’ll even go as far as saying that it is entertaining after a fashion. But I can’t come out and recommend it wholeheartedly, I can’t regale you with its brilliance, or its originality. I can’t point to how quirky it is, how well it does what it sets out to, as Black Bullet is none of these things. Black Bullet has plenty of good ideas, but it doesn’t do much with them, and it so desperately and blatantly wants a second series, there’s no way that this 13 episode run won’t disappoint. 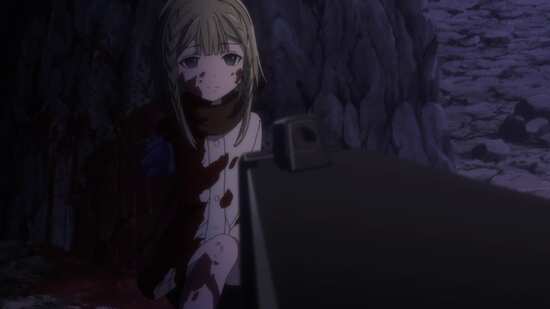 It’s hardly a unique story, the idea of humanity surviving in small enclaves following a global cataclysm, and continuing to face an existential threat. That way lies Chrome Shelled Regios and so on. It falls to a teenage boy and a little girl with special abilities to protect the survivors of humanity; who despite such global destruction, still live recognisably comfortable lives in a modern city. This time the existential threat comes down to a virus, one that infects and transmutes victims into strange beasts that go on a rampage infecting more victims. Conventional weapons don’t work on these mutants, but weapons crafted from a strange metal called Varanium (the black bullets of the title) are effective. Giant monoliths of the metal on the outskirts of the city keep most of the monsters at bay. Another weapon is the cursed children, girls born to women infected with the virus, who have inherited special powers. These little girls team up with those armed with the Varanium weapons to form civilian security units to battle the threat. 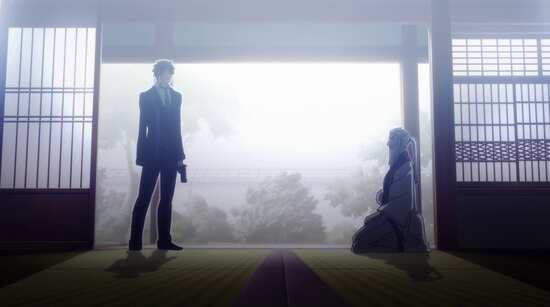 Black Bullet follows one of these units, as they do battle with threats from both within and without the environs of future Tokyo. It begins with a prologue set in 2021, during the worst of the virus’ predations, introducing us to the main character in his infancy, and then catching up to him 10 years later as he’s working as a CivSec agent, teamed up with a cute girl named Enju. We don’t get a lot of their day to day work, before they are thrust into a conspiracy surrounding a strange masked man. 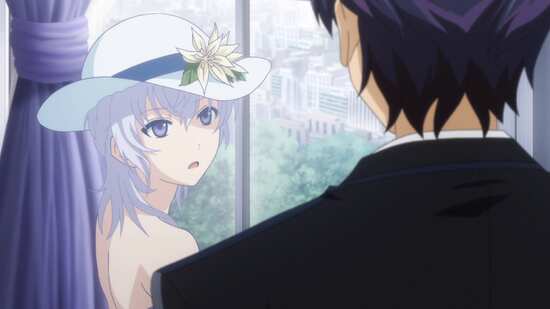 And here is the first of Black Bullet’s problems. It’s all about the conspiracies, the secrets, and the constant drip-drip of revelations over the runtime of the series. What is the Gastrea virus? Why do the mutants behave the way they do? What was the New Humanity Creation Project? What’s the deal with Rentaro? These questions and more will be asked regularly, and we might get answers, hints of answers, or nothing at all. Black Bullet is another show that will pick up an idea, toy with it for a while, and then discard it, to be forgotten for most of the rest of the series at best, or forgotten completely at worst. 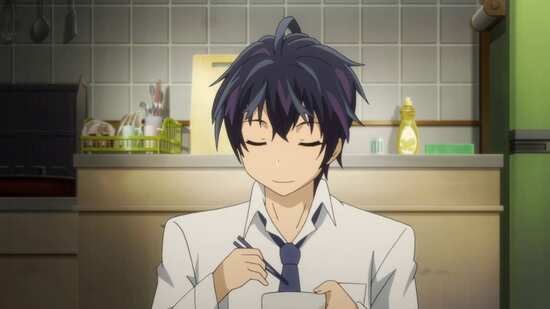 The second issue is character development, or lack thereof. Black Bullet isn’t good for this, with characters coming and going through the series, never really staying long enough to register. A big example of this is in the show’s conclusion, one of those massive, high stakes battles that conclude shows like this. Spoiler, but it involves the sacrifice of what should be a significant character, but it feels utterly meaningless, as they are introduced to the show just an episode or so before, and we know nothing about them by the time they make their noble sacrifice. Also, characters can just turn on a sixpence, as if someone just pushed a psychopath button in their brain. It feels like I have to reset my expectations of the show almost every episode. It has an unevenness of tone that is repeatedly jarring. 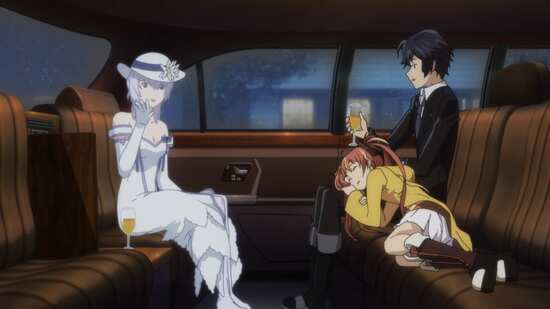 All of this ultimately means that the ending feels unearned. It’s supposed to be big and meaningful, but the characters have been so uneven, and the story has been so coy with its secrets, offering hints and allusions rather than anything concrete, that there just isn’t any emotional investment in the story. And there will be a bit in the show which will throw you out of it completely. For me it’s the bit where I realised that I was watching a 16 year old boy beating the snot out of a 10 year old girl.

Black Bullet is okay to watch, it’s certainly never dull, and it does what is says in the blurb. It’s just not very good at it.