Review for Astra Lost in Space - The Complete Series

When every second anime series to come out in the UK seems to be a “lost in a fantasy world” isekai show, originality might seem like an oasis in a desert. Of course originality is a relative term, and you might not think there’s much difference between being ‘lost in a fantasy world’ and ‘lost on another planet’ while the title of this show might have “Danger, Danger Will Robinson” klaxons going off in your pop culture memory banks. But the fact of the matter is, I can’t recall having seen another anime show quite like Astra Lost In Space before, and quite frankly that’s good enough for me to open my wallet, and that’s even before I’d learnt just how well this show has been received by fans. 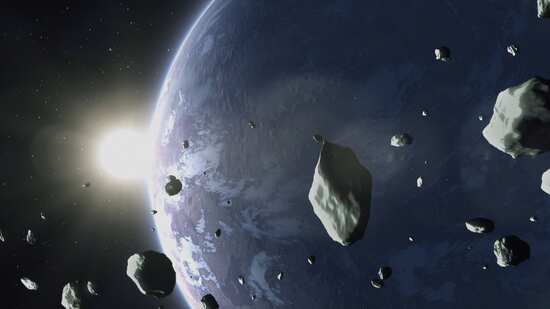 It’s the year 2063, and travelling through the galaxy is an everyday thing. It’s got to the point where schools take field trips to other planets. For Team B-5 of Caird High, 8 drastically different students, surviving 5 days alone on the planet McPa counts to their course credit. To make things trickier, they have to take a ten year old girl with them to take care of, the little sister of one of the students. They get to McPa, and the ship takes off leaving them behind.

Which is when a strange large sphere of energy appears, and starts chasing them down, and they disappear one by one, pulled into the sphere. It’s a good thing they hadn’t got around to taking their spacesuits off, as they appear in orbit around another planet, drifting in space. Fortunately, there is a derelict spaceship in orbit nearby, but their first problem is to just get to that ship. They’ve got a bigger problem too. McPa was just 9 light years away from home, but they’re now over 5000 light years from where they were, months away from home... lost in space!

Twelve episodes of Astra Lost In Space are on these Blu-ray discs from Manga Entertainment. Note that the first and last episodes are both double length, so in terms of runtime, this series is closer to a fourteen episode run.

Astra Lost In Space was not shot on IMAX. That’s not usually a disclaimer I apply to anime, but this show has something in common with films like Christopher Nolan’s films with their variable aspect ratios, with scope footage interspersed with IMAX, which switches from letterbox to fullscreen on home media. Astra Lost In Space has for most of its runtime a 2.35:1 widescreen 1080p ratio, but for the credit sequences, the outer space sequences and the like, the scope opens up to the full 1.78:1 and 1080p.

The image is clear and sharp, colours are rich and consistent, and there is no sign of visible compression. There might be the odd moment of banding, but by and large this is a strong and well detailed transfer. It’s all to the good, as there is a lot of quality to the animation, with great mechanical designs, memorable characters designs, and a whole lot of effort and imagination put into the worlds designs. There are plenty of alien planets visited in this story, and each is wonderfully thought out.

You have the choice between Dolby TrueHD 5.1 Surround English, and Dolby TrueHD 2.0 Stereo Japanese with subtitles and signs locked to the appropriate tracks. I stuck with the Japanese audio and was very happy with the experience; the actors are suited to their characters and give memorable performances. The action comes across well, the stereo doing more than enough to give the sci-fi the space and scope that it needs, although you do wish that the Japanese studios would give their TV shows surround tracks, especially for shows like this. The music suits the story, and drives the action and emotion well. The subtitles are timed accurately and are free of typos.

You get two discs in a BD Amaray case, one on a centrally hinged panel. It’s wrapped in an o-card slipcover that repeats the sleeve art and blurb, and the inner sleeve has some more art. The discs boot to animated menus, and there is a flyer for the digital copy.

Disc 2 has the rest of the extras.

There are 3:47 of Promo Videos.
2 Commercials last 34 seconds.
There are Web Previews for all 12 episodes, with a total runtime of 8:15.
You get two textless openings and five textless closings. 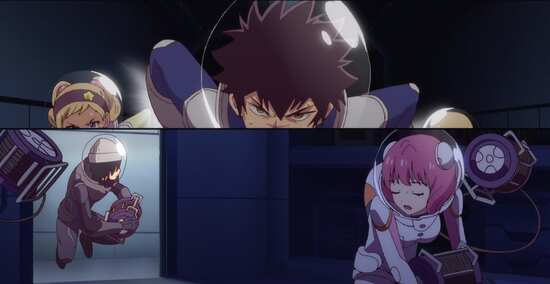 Once in a while a show like Astra Lost In Space comes along, so strong in its narrative, so impressive with the way the story unfolds that it becomes nigh on impossible to write about, as spoilers in a review will just wreck the experience. I absolutely loved Astra Lost In Space, was hanging on every word by the end, and completely invested in all of the characters. It’s a really well put together sci-fi comedy drama that has a series of compelling mysteries at its heart. It isn’t long before each episode is unfolding like a little Twilight Zone, liable to have a twist at the end that will knock your perception of this show on its head. This happens again and again, but it all makes sense; it all hangs together, and by the end, it seems that any plot hole you might have spotted while watching will have been filled, beginning with the amazing coincidence of being thrown through a portal 5000 light years, but winding up floating in orbit, within spacewalk distance of a derelict spaceship.

Even without the mysteries, Astra Lost In Space is a great adventure series. You have a group of eight teenagers, plus a little girl, adopted sister to one of the older children, who get thrown into adversity on what should have been a simple school field trip. They wind up thousands of light years from where they should be, with only a derelict spaceship with which to somehow find their way back. The ship works, but they are low on resources, so they have to plot their way back, planet hopping all the way to find food and water. Each planet they visit offers its own challenges.

These nine children have seemingly been thrown together at random for this trip, they don’t really know each other, don’t particularly like each other, and all are carrying more than the expected chips on their respective shoulders that come with being a teenager. So the trip back also encompasses a lot of friction, and getting to know each other, learning to trust one another, and working together as a team. It’s just sheer luck that one of the group, a boy named Kanata has a particular chip on his shoulder that stems from a tragic past, a previous school trip that went badly, where a beloved teacher lost his life, and the promise that Kanata made to him, to survive and achieve his dreams. One of his dreams is to go into space, and his positivity, and that previous survival experience makes him the natural, if somewhat goofy leader, and he becomes the magnet that draws the others to him, and starts them all off on their own paths of healing, dealing with their respective pasts, and their respective chips. 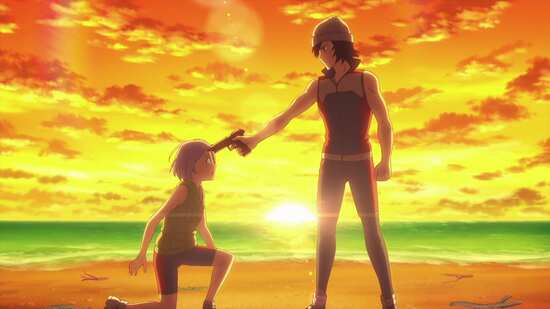 But against this positivity is the suspicion that one of them isn’t who they say they are, a suspicion that arises when the ship’s communicator is destroyed not long after they board, stopping them from simply calling for help. And this brings us back to the mysteries at the heart of the show, the really good stuff that I refuse to talk about in this review. I can’t emphasise enough just how compelling I found Astra Lost In Space, it very much is a show that you can easily watch on a binge. It has the great blend of drama and comedy that you don’t see as much in anime at the moment. It’s the kind of thing that I’d look to shows like Tenchi Muyo for. It shows that you can tell a rich and gripping tale without having to be too dark and gritty, and without sacrificing intelligence. 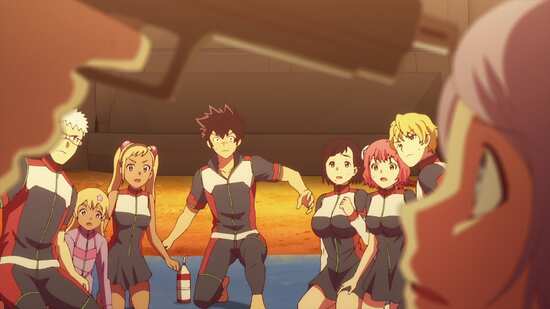 The story also gets enough time to play out, with a double length episode really getting the world building out of the way, and taking the time to introduce the main characters without rushing things. The final episode takes 50 minutes as well, and not only concludes the story satisfactorily, but also gives a decent epilogue that in a show like this is necessary if you’ve invested in any of the characters. Remember what the final episode of Star Trek: Voyager was like; the final scene of the ship coasting towards Earth, but with no pay off to the crew actually getting home. Astra Lost in Space at least avoids that mistake. I loved this show, but if there is one misgiving I might have, it’s with the re-watch value. While the adventure is excellent, and the characters are likeable and interesting, once you’ve been spoiled for the story, I don’t expect it to have the same, nail-biting edge-of-the-seat effect that it had the first time around. Only a second viewing will tell for sure.