When I saw this in the last batch of check discs, I didn’t think much of it, but now that I come to review it, start reading around it and looking up info, I keep typing Code Ignition into the search engines. That must be more than a Freudian slip, and worth investigating. It turns out that there is a potential problem with this series, before I’ve even watched a single episode. For Z/X Code Reunion is the 2019 sequel of sorts to a series from 2014 called Z/X Ignition, and that show is yet to have a UK release. We may be up a certain creek without a paddle if there’s too much continuity demanded. 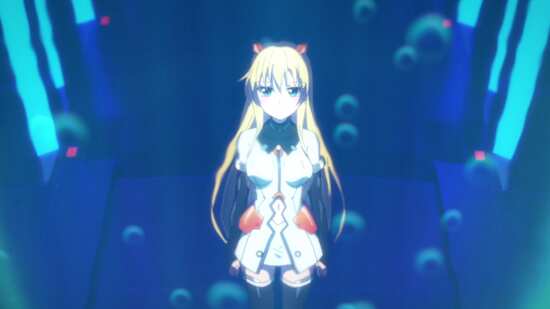 When Azumi Kagamihara was a little girl, the world changed. Portals opened up everywhere, and strange extra dimensional beings appeared. Dubbed Z/X, they came from five different dimensions where they fought wars for dominance, and they were set to continue that battle across Earth as well. Not that it mattered much for Azumi, as she developed an incurable illness and had to be placed in a coma. 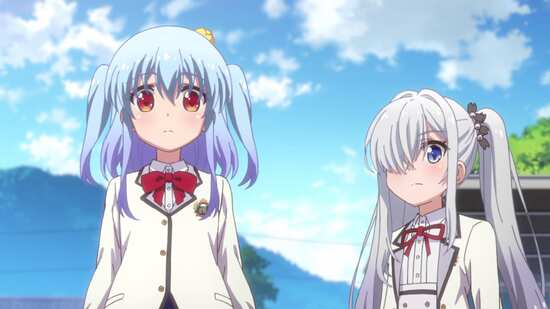 Years later, she is roused from her deep slumber by a Z/X of the Blue Realm named Rigel. She offers Azumi a cure for her illness in exchange for a pledge of loyalty, a pact between her and Rigel to fight together. Not that much fighting should be expected, as the five extra-dimensional realms have forged a tenuous peace treaty, and now co-exist on Earth, with many Z/X forming pacts with humans. Azumi and Rigel are to attend an Academy where they will be trained alongside other partnerships. But war is coming again, this time from the outside, a force called the Inerma who are only vulnerable if the five Z/X realms work together. The peace treaty is about to be tested... 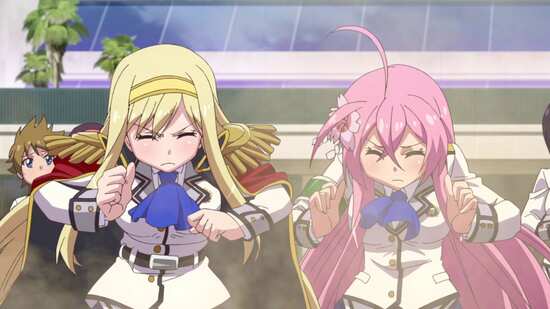 12 episodes of Z/X Code Reunion are presented across two Blu-rays from MVM. 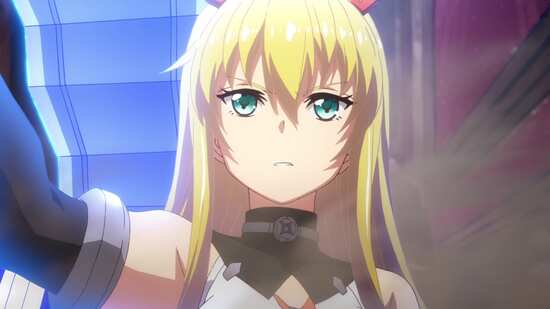 Z/X Code Reunion gets a 1.78:1 widescreen 1080p transfer on these discs. The image is clear and crisp, colours are rich and consistent, and the animation comes across smoothly enough. There are no visible problems like compression or even banding to mar the image. Then again, Z/X Code Reunion isn’t a top tier animation, with simple and generic character designs, rather uninspiring animation, and with the money pushed into the special effects, especially for the action sequences. It all works well enough for the story, and is certainly watchable. 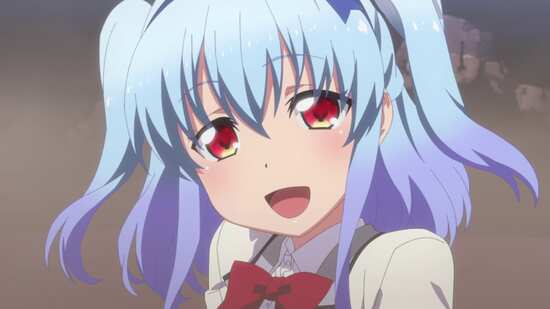 The sole audio track for this show is the Japanese track in DTS-HD MA 2.0 Stereo form. You get English subtitles locked during playback to go with this. The audio is perfectly fine, clear without any glitches or flaws. The actors are suited to their roles, and the action comes across well. The dialogue is clear, and the subtitles are accurately timed, while I noticed just one minor typo towards the end. The music drives the pace of the story as required but doesn’t really stick in the mind, not even the theme songs. 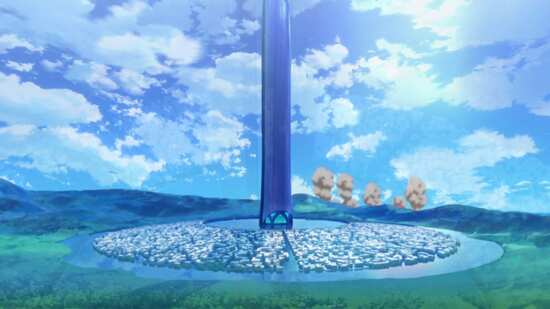 The discs present their contents with static menus, and each episode is followed by a translated English credit reel.

The extras on disc 2 comprise the textless openings (x2), the textless closings (x4) and trailers for Mysteria Friends, Undefeated Bahamut Chronicle, Is It Wrong to Try to Pick up Girls in a Dungeon II, and The Demon Girl Next Door. 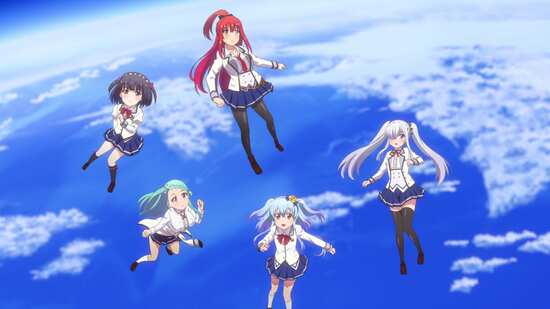 On the bright side, you don’t need to watch Z/X Ignition to enjoy Code Reunion; this series stands by itself as a story, even if it is building on an established story universe. But it’s not the show to watch, or to buy anyone who has had a fair amount of experience with anime. It’s strictly entry level stuff, the show to watch if you’re graduating from the Saturday morning Japanese ‘toon. It’s the not too heavy stepping stone on the way to other genres and new ideas. If you’ve been watching your card collect ‘em up shows, your magical girl shows, your super sentai shows as a kid, then there will be much that is familiar in Z/X Code Reunion, but it’s also got enough in the way of fan service to get those prudish parents disapproving. 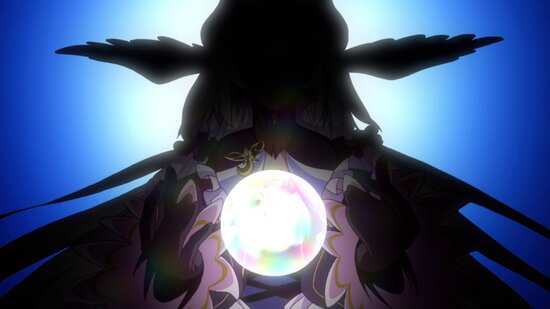 You have these five extra-dimensional realms, which intersect with Earth, and had previously been at war with each other, but now have a peace treaty. These realms are known by colours, red, blue, green, white and black. Beings from these realms can form pacts with humans from Earth, and can transform into cards that people can store in bracelets, summoning their partners when needed. And these partners can combine magically to transform into stronger fighters. Believe it or not, there’s a giant robot as well in one episode, and the story requires one of each colour realm, partnered with a human, and all five sets of partners teaming up to fight against a common enemy, for which they all get teleported up into orbit. You have your card collecting, your super sentai team, and your magical girl transformations. It’s all the staple anime food groups in one convenient series! 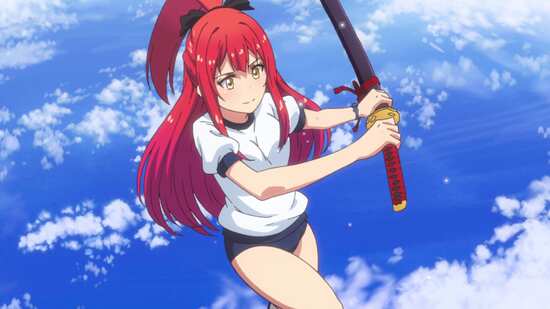 But that’s actually the least of the show. It’s more of a slice of life series, focusing on the friendships that develop between five girls who wind up in the same team, as they attend the Academy where they and their partners are training to fight the alien Inerma that are liable to attack the Earth and the five realms at any time. It’s a cute girls doing cute things show in between the occasional battle sequences. The show focuses on the girl who woke up from a coma, Azumi who partners up with a tall, elegant girl named Rigel. Their relationship is the closest the show gets to a romantic plot thread in the story. Also in their team is a girl named Ena, whose partner is a talking cat, Matoi whose partner is a little doll, Yuni who is teamed up with a mute catgirl, and Shuri whose partner is a haunted samurai sword. They each have their issues, Matoi and Shuri are at each other’s throats at first before they settle down, Yuni just wants an easy life, and Matoi eventually latches onto Ena as a surrogate big sister. 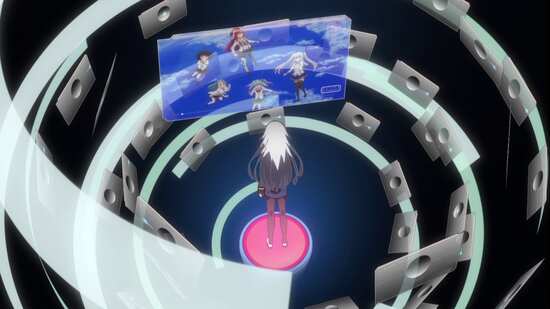 The Academy has just enough room for five teams after all the initial tests are complete, but this sixth team is just about good enough to sneak in, even if they are the lowest rank. But as the lowest rank, they don’t get to stay in the snazzy new dorm and get the cool amenities, they instead get a rundown dorm some way from the main building, and a Jekyll and Hyde tutor in the volatile Ira, one of the girls one minute, physical trainer from hell the next. 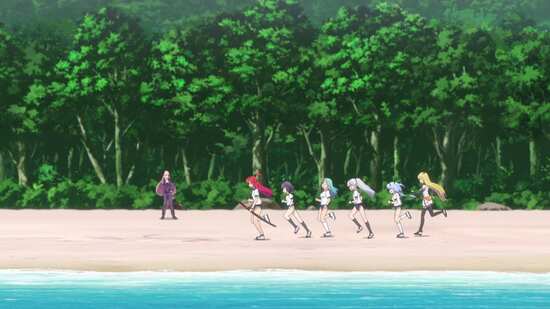 The first couple of episodes introduce the premise, before the show settles down to the routine of training and cute girl interactions. There’s even the obligatory summer vacation episode, replete with swimsuits and fireworks at the rich girl’s family summer home at the beach. Most of the action is devoted to the training sequences; when it comes to fighting against the actual enemy, there are just three battles in the series. The Inerma remain pretty faceless for the first two, but there are some emotional stakes in the final battle which elevates the storytelling in the show quite a bit. 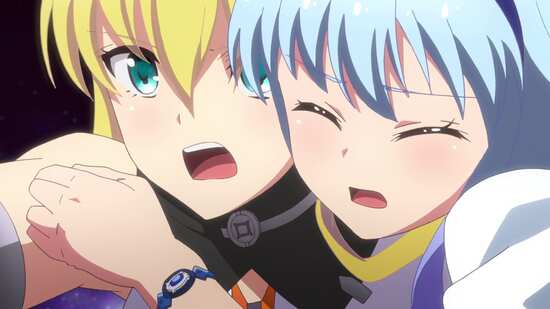 In many ways, Z/X Code Reunion is anime by the numbers; the quality of the animation is weak at times, the story quite predictable and with the show not really bringing anything new or original to the table. The narrative can be quite clumsy at times, and there are a couple of exposition dumps that stick out like sore thumbs. But the characters are likeable, there’s a degree of development for all five of the main cast, and there’s just enough hook and investment to be had in them to make watching the show entertaining, and rewarding if not quite worthwhile. It’s a passable piece of entertainment and just the show you want to recommend to someone who is coming off a diet of Pokemon and Power Rangers, ready to see something more appropriate for pre-teen audiences, but not too heavy or drastic a shift to be overwhelming like an Attack on Titan. The discs are of the usual quality, but be aware that this show doesn’t have the highest production values.