Back before the anime industry had jumped on the comic book superhero bandwagon, if you had come to me with the premise of Tiger and Bunny, and the premise of My Hero Academia, I would have guessed that it would have been Tiger and Bunny that would have the long running franchise. The commercial, reality TV twist to a well-worn set of tropes was enough to make the show stand out. My Hero Academia’s idea of a school for fledgling heroes isn’t even an original one, what with the Sky High movie, or going back to Professor Xavier’s school for the gifted in The X-Men, yet it’s this anime which has sustained, with two feature film spin-offs and now the debut of this, its fourth season. 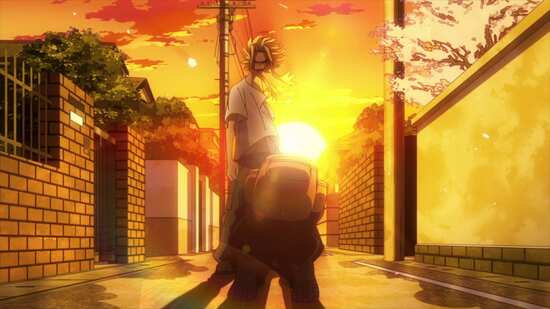 You can call them superpowers, you can call them mutations. In the world of My Hero Academia, they’re mundanely thought of as Quirks. I say mundanely, as some 80% of the world’s population have Quirks, some power or ability that makes them special in some way. Naturally there are people who use their Quirks for selfish, even illegal gain. Standing against them are the heroes, those who use their powers for the common good. From the day Izuku Midoriya saw the world’s #1 hero, All Might in action, he was certain that he too would become a great superhero. The only problem was that Izuku was one of the 20%, born without a Quirk. 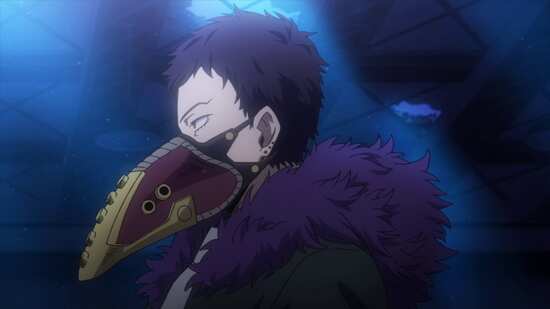 But Izuku’s selfless actions in a crisis situation caught the attention of All Might, who decided that the young boy would inherit his power. Getting used to a sudden new Quirk doesn’t happen overnight, and even with intensive training, Izuku is still playing catch-up when he enters U.A. High School, where the world’s heroes are trained. But he and his class 1-A manage to distinguish themselves when the League of Villains attacks. As this collection of episodes begins, All Might’s secret has been revealed, and he has been compelled to retire from the superhero business. All hopes now lie in the next generation of heroes, and it’s time for Izuku to get some work experience, doing some actual heroing. 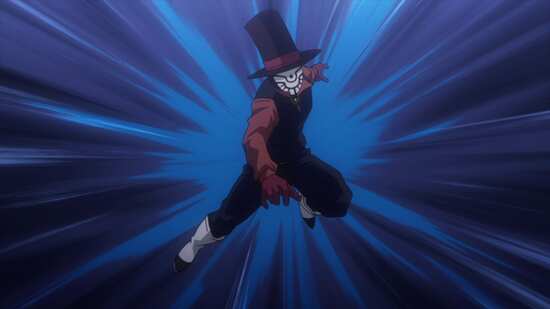 The first thirteen episodes of My Hero Academia Season 4 are presented on 2 Blu-ray discs from Manga Entertainment. 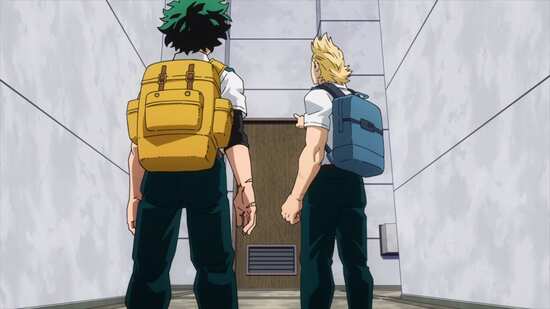 My Hero Academia gets a 1.78:1 widescreen 1080p transfer on these Blu-ray discs. The image is clear and sharp, the animation is smooth, and there’s no problem with visible compression, and there is only the slightest occasional hint of digital banding. Studio Bones do the honours for the animation, and they have pedigree bringing across Weekly Shonen Jump properties to anime such as Full Metal Alchemist and Soul Eater. It all begs the question as to what happened with My Hero Academia, or whether the quality of the source material is such that there was nothing that Bones could do with it. This is a simplistic animation, with generic character designs, and a basic looking world design. It looks like the kind of show that runs for years and years on a weekly basis as lowest bidder animators churn out their work conveyer belt style. That’s the look of the show, not the actual animation, as Bones takes this basic looking story and animate as much as they can, creating something that is dynamic, vibrant, and of decent quality. But you can’t get away from how basic the show looks. It looks like kids’ TV, which is probably exactly what it is. And then they deliver an amazing fight animation sequence and it’s like you’re watching a completely different show! 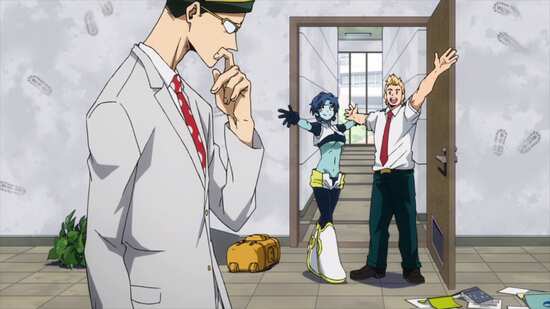 You have the choice between Dolby TrueHD 5.1 Surround English and 2.0 Stereo Japanese with optional translated subtitles and signs. I checked that the English dub exists (it does), but stuck with the Japanese for the duration, and was happy with the experience, with the characters suitably cast, and giving the full intensity required for their performances. The action is well represented in the stereo, and the music suits the show well. The subtitles are accurately timed and are free of typos. This is another one of those titles that suffers from English words translated into other English words. The Japanese dialogue uses the word ‘intern’ but the subtitles read “work study”. 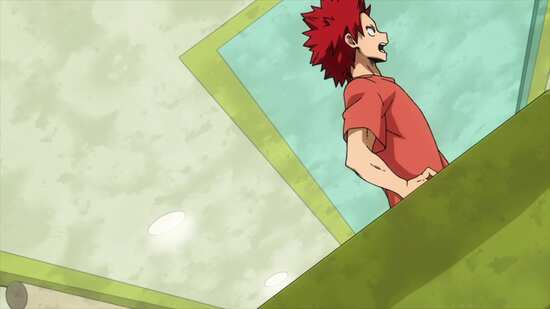 You get two discs on each inner face of a BD Amaray case, wrapped in an o-card slipcover. The inner sleeve has some nice comic style art referencing the episodes. There is also a leaflet for a digital copy of the collection. 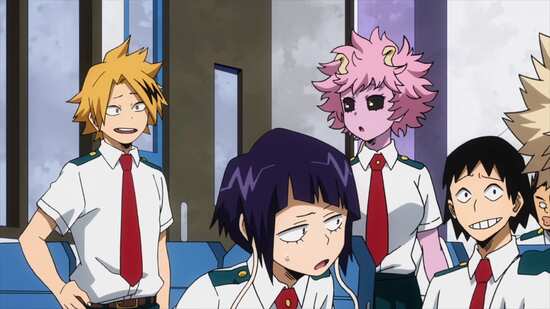 You get the extras on disc 2.

There are 1:50 of Promo Videos, and the textless credits. 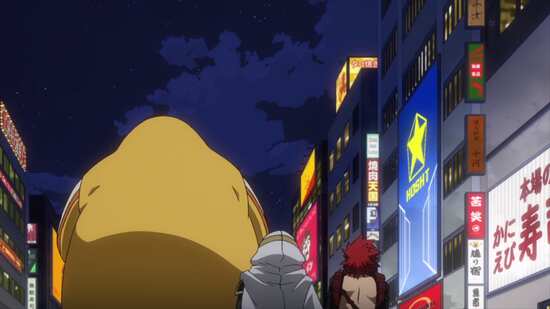 Just when you think that you’ve seen all that My Hero Academia can give, it pushes things up another level. After all, in the previous collection we had that big confrontation between All Might and his arch-nemesis, All For One, and things got really epic indeed. You wouldn’t think that the show could come up with as big a villain so quickly; a challenge that actually exceeds the threat posed by All For One. And you wouldn’t think that it would be a two-bit criminal that would do it, organised crime that seems quaint in the world of quirks, of heroes and villains. But that’s exactly what happens in the first half of Season 4 of My Hero Academia. 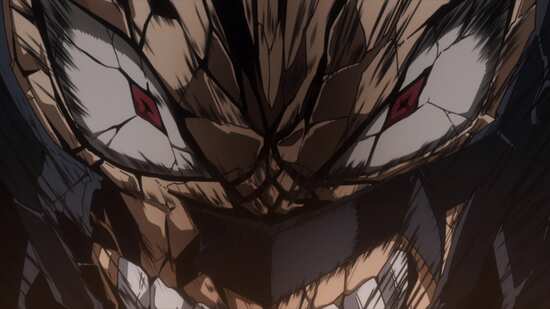 With All Might’s retirement, it’s become more and more important for the other heroes to take up the slack, to provide that beacon of hope for people. To that end, the promising students in the first year of U.A. High School are being offered a fast track to work placement. Now that they have their provisional hero licences, they can become interns at suitable hero agencies, and of Izuku’s class, he, Kirishima, Ochaco and Asui get to earn some work experience. They also get pulled into the next big threat to this world of heroes. 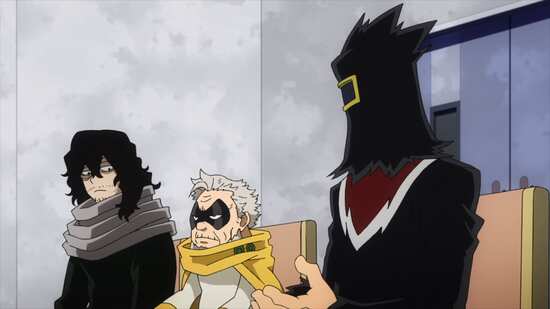 Part of Izuku’s first assignment is surveillance of the Shie Hassaikai yakuza group, organised crime that is thought of as small time in this world of heroes. But it turns out that the young head of this group, a villain by the name of Overhaul has plans for his organisation to be big news once more. His ability allows him to destroy and reform anything he touches, and disintegrating his foes makes for a bloody and violent threat in and of itself. But he has a plan to end this world of heroes. One of his relatives, a little girl named Eri has a special ability in her blood, and Overhaul is having that blood extracted and transformed into a serum which can permanently remove abilities, turning heroes into normal people, and giving the villains that pay for this drug an instant advantage. Consequently, he thinks little of Eri other than a resource to be exploited, and when Izuku sees how she is treated, he becomes determined to rescue her. 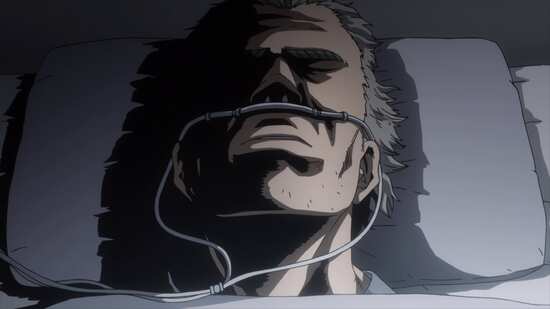 Throw in a new mentor in Sir Nighteye whose powers of prognostication are so accurate that it’s almost like he’s setting the future in stone, and worrying revelations about Izuku’s immediate future and All Might’s ultimate future, and you have enough drama to keep you at the edge of your seat for twelve episodes. I say twelve, as the first episode in this collection is a reminder of the show’s mission statement, with a reporter visiting the school to profile the students, but in reality to get a scoop as to who All Might’s successor might be. It’s a nice way to reintroduce the characters and reacquaint us with their abilities. And if you’re wondering what the League of Villains is up to, they play a big part as well, when Overhaul tries making an alliance with Shigaraki; still, not everything is as it seems here too. 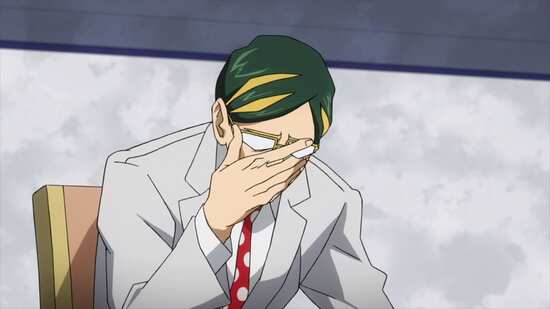 Comedy, action, drama and thrills; it’s all there in My Hero Academia Season 4 Part 1. The story continues to entertain and gets more interesting, while the stakes for the characters get higher and higher. The seasonal approach to this long running shonen adaptation is paying dividends with anime that is dense with story and character, and with no dead wood whatsoever. These Blu-rays too are up to the standard of the previous releases. If you’re going to get hooked on one current long running anime series, the My Hero Academia is the one.