I have this list of films that I am definitely not going to double-dip to Blu-ray. Absolutely, categorically not, as it would be a waste of money. While I like them enough on DVD, I’m not enthusiastic about them enough, or indeed watch them often enough to get the Blu-ray. But then I walk into a discount store and find a copy on a shelf for a couple of pounds, and all of my stoic resolve evaporates. And that is how I wound up with Jurassic Park on Blu-ray; and seeing I had the first film, I simply had to get the second one as well, seeing as I had the twin-pack DVD, and I now needed to retire both of the discs. I haven’t as yet crumbled and double-dipped on Jurassic Park 3, a DVD I got free with five packets of chocolates. 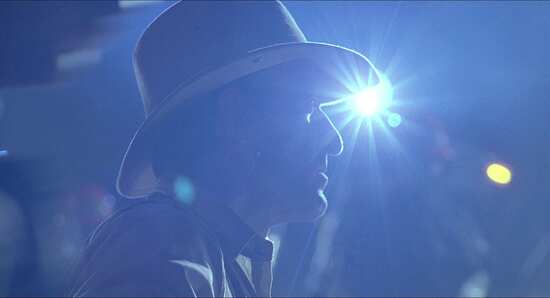 John Hammond is a man with a problem. An accident at his new theme park attraction has worried his investors, and the lawyer says that they can be appeased if experts sign off on the attractions. These are unlikely experts though, palaeontologists Alan Grant and Ellie Sattler, and mathematician Ian Malcolm. He’s had them flown out to an isolated island off Costa Rica, and he’s brought his grandchildren Tim and Lex as well, to get the authentic theme park experience. As for the palaeontologists, well they are the only experts when Jurassic Park is an attraction which has used genetic engineering to bring dinosaurs back to life. 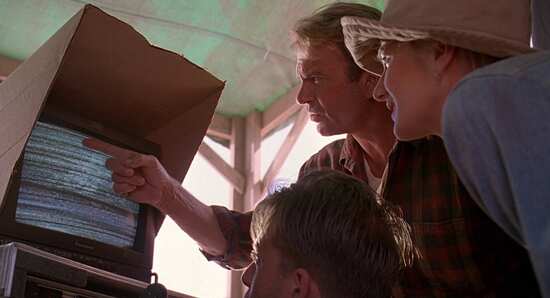 Jurassic Park gets a 1.85:1 widescreen 1080p transfer with the choice of DTS-HD MA 7.1 Surround English, and DTS 5.1 Surround French, Italian, German, Spanish, and Japanese with subtitles in these languages and Cantonese, Mandarin, Danish, Korean, Icelandic, Dutch, Finnish, Swedish, Norwegian, and Portuguese. Jurassic Park first got a Blu-ray release in 2011, and every subsequent release has used the same VC-1 disc (this one’s from 2015); the same specs, the same content, and that’s despite the film getting a 4k UHD release in 2018. The Blu-ray bundled with that release is this one, not a new version struck from the 4k re-master. 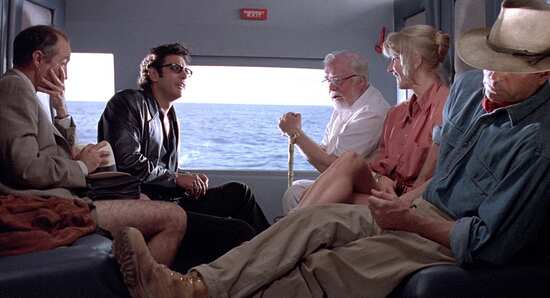 This Blu-ray really is showing its age. The sound certainly does impress, with the lossless surround track really immersing you in the jungle, and throwing those dinosaur noises around the soundstage with abandon, the action and the ambience utterly immersive, John Williams’ score just as majestic as always, while the dialogue remains clear. The image on the other hand is tired and unimpressive. The picture is soft, the colour balance lacks the pop you’d expect from Blu-ray albeit with the odd garish element on screen, and the film seems to have been run through the DNR mill, with grain reduced, and with waxy skin-tones. I do think it’s been mastered from the same source as the original DVD. 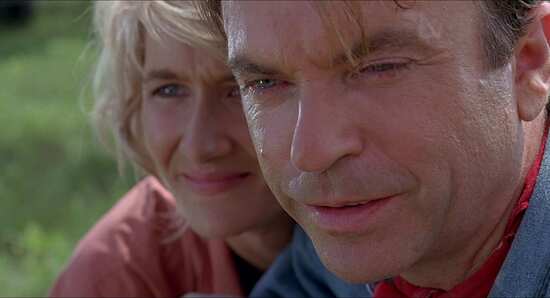 You get one disc in a BD Amaray case with a digital copy slipped inside. After an anti-piracy thank you, the disc boots to Universal’s stock animated menu. 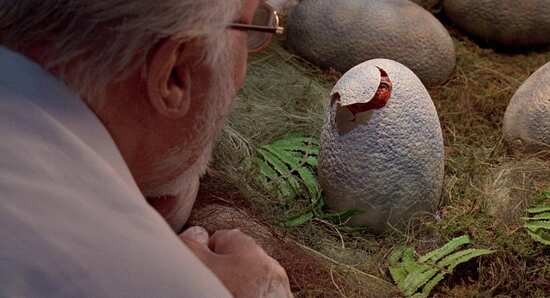 There is also Jurassic Park: Making the Game, which for a brief moment had me worried that I’d get PTSD flashbacks to the Amiga game from 1993, one of the worst Amiga games ever. Instead this is a glorified trailer for a 2011 JP game. This lasts 4:43.

The rest is archival material from the original DVD. 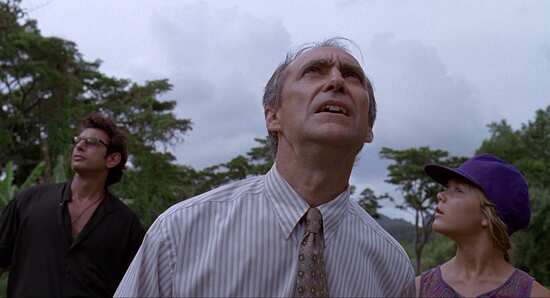 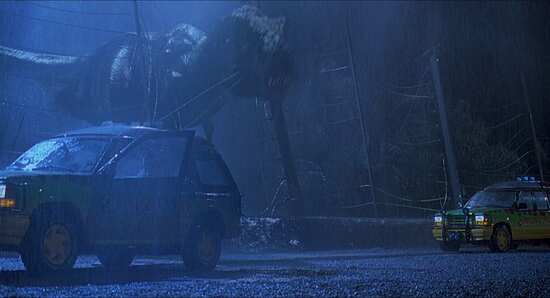 There are 5 sets of Storyboards, 3 Galleries of Production Art, the Theatrical Trailer (1:11) and a defunct BD Live link. The new featurettes are in HD, everything else is SD. 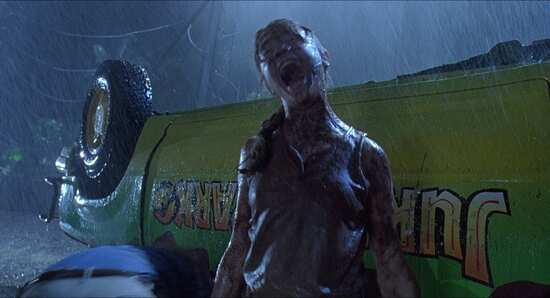 When I last reviewed Jurassic Park on DVD, I wasn’t kind. Would you believe it’s been 18 years since then? A nine-year-old movie might not have impressed me, but a 27 year old movie has attained classic status. The characters are iconic, the story simple but memorable, and the film is a landmark moment in cinema when it comes to CG effects technology. Before this, it was Terminator 2 which made its mark with a digital character (when Robert Patrick was in the process of morphing), but in Jurassic Park there were hundreds of digital beasties, and all of them looked so real, so stunning when projected 20 metres high on a cinema screen. 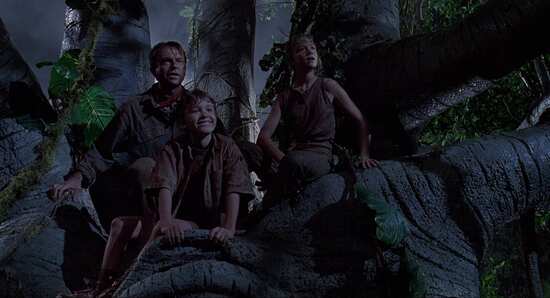 We’ve been trained with digital imagery for the last 27 years, and Jurassic Park now looks decidedly quaint, as archaic as any Ray Harryhausen film, although the practical and animatronic elements still hold up well. But the story is simple. A group of people arrive at an island to see some dinosaurs; the dinosaurs get loose, the people spend the rest of the film running and screaming and trying to avoid being eaten. With the mitigation of time, I’ve come to realise just how well realised the characters are, just how much of a presence they have on screen, especially when you have to be frugal with how much time you spend showing off your dinosaur special effects. Now you can just throw some money at an effects department to make up for the shortcomings of your actors’ performances. Put it this way; everyone remembers Lex and Tim from Jurassic Park; can you name the child characters in Jurassic World though? 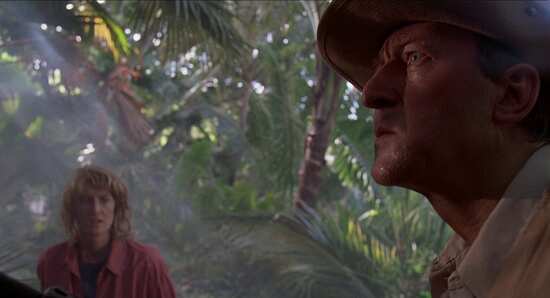 Jurassic Park is a classic, but I still don’t like the film. While I have more appreciation for the characters, the place the movie has in history, and of course Steven Spielberg’s inimitable facility for directing, I still find Jurassic Park slow and ponderous. I still find that it’s more of a showcase for effects technology rather than a gripping, and thoughtful narrative. It makes its points about the commercialisation of science with a blunt instrument while the end of the film still feels like an anticlimax. 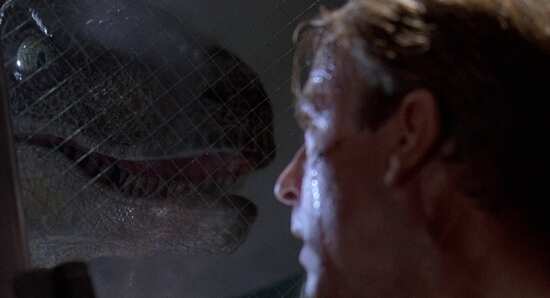 Given that they are still making Jurassic Park movies, the original has earned its place in the film pantheon. It’s nice to have for just that reason alone, but I have to say that this Blu-ray is a disappointment, with its less than impressive image quality. It’s another disc where it’s better than the DVD, but that’s not reason enough anymore in a UHD world. Naturally it would be a Universal back catalogue release...