Review for Is It Wrong To Try To Pick Up Girls In A Dungeon? Arrow Of The Orion

The Is It Wrong To Try To Pick Up Girls In A Dungeon? franchise, Danmachi for short has been all around the houses when it comes to UK releases, with the first series coming out courtesy of Animatsu, the Sword Oratoria spin-off from MVM and now this movie comes out thanks to Manga Entertainment. In a few weeks, the second series will be released here as well... by MVM. Yet all of it is being released in the US by Sentai Filmworks. Once again, consistency of collections on fans’ shelves is going to take a pounding when it comes to company logos. 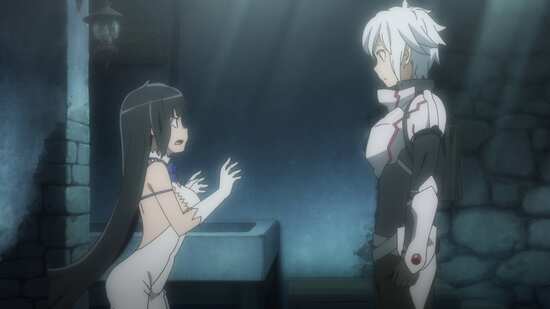 The world of Danmachi has an RPG flavour, with adventurers delving into dungeons and battling monsters to collect treasure and gain status; although thankfully for my sanity, it doesn’t involve anyone from our world being lost in that one. Danmachi is a world of gods, gods that tired of ease and ultimate power up on high, who chose instead to sacrifice those powers to live in the mortal realm instead; where they wound up recruiting worshippers, adventurers to do battle in their name so that they too could accrue status. The goddess Hestia, she of the boob ribbon has only managed to recruit one worshipper, and when she first met Bell Cranel, he wasn’t the most adept adventurer. Fortunately he learned fast. 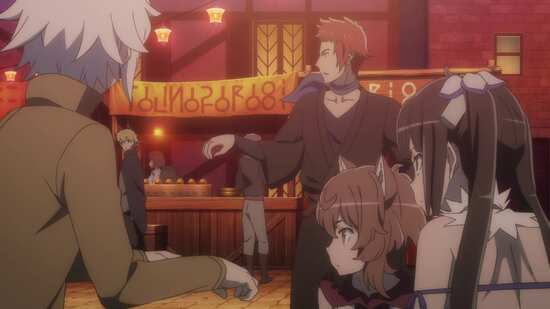 The film begins at festival, where one of the attractions run by the god Hermes is to pull a spear from a stone. All the adventurers try their luck, but it’s Bell Cranel who manages to break the enchantment and free the spear. There’s more to the competition than meets the eye. Hermes set it up on behalf of the goddess Artemis, as a means to determine the one champion destined to wield the spear, her Orion. Bell may be part of Hestia’s familia, or indeed all of it, but Artemis wants to recruit him for an adventure outside the usual dungeons. For in the forest surrounding the Ruins of Ersos, the monster Antares has freed itself from thousands of years of enchantment, the whole world is threatened, and the only way to defeat Antares is with the spear. But this isn’t the whole story... 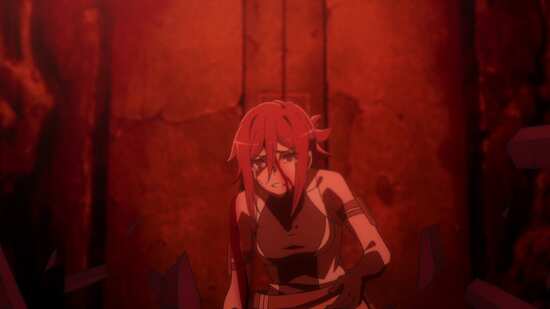 Arrow of the Orion gets a 1.78:1 widescreen 1080p transfer. The image is clear and sharp, detail levels are excellent and colours are rich and consistent. This may only be a single layer disc, but with just 85 minutes of video content, you don’t have to worry about compression, aliasing or significant banding. The character designs are familiar from the series, but the world design is richer and more detailed, while the quality of the animation is justifiably cinematic. This film truly warrants the HD presentation. 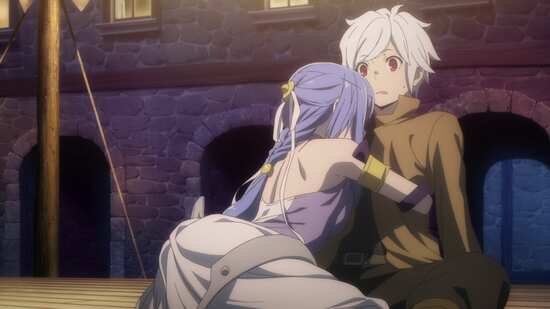 You have the choice between DTS-HD MA 5.1 Surround English and Japanese, with subtitles and signs locked to the appropriate track. Once again, a feature film warrants the surround presentation, and Arrow of the Orion’s sound design really does impress. The dialogue is clear throughout, while the orchestral music really gives a John Williams level of scope to the story. The action is thunderous, maybe a little too much at times, with some of the more intense sequences overpowering the music and dialogue. The subtitles are accurately timed and are free of typos. 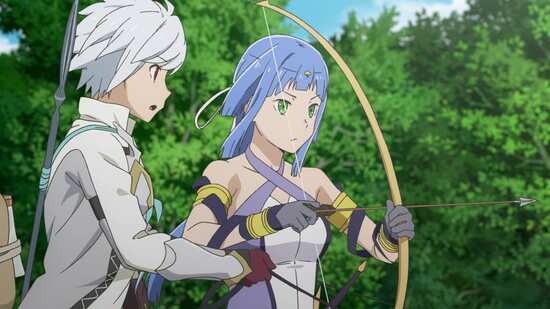 You get one disc in a BD Amaray case, which repeats the cover art on an o-card slipcover. The inner sleeve offers some nice art. 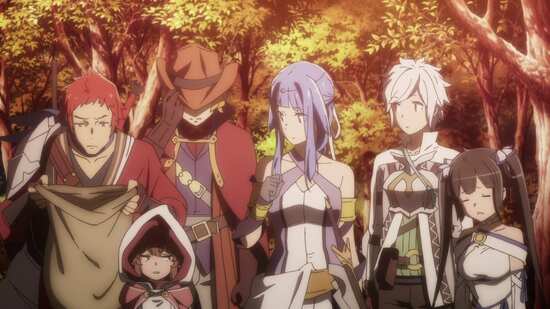 Manga’s cut and paste approach to case blurb offers you the following errors, English only audio, and that in Dolby TrueHD format. We get an ‘anamorphic’ picture as well. Also, like every Funimation title these days, the case promises a digital copy, but this being a Sentai title, there is no digital download to be had. It’s just another mistake on the packaging. 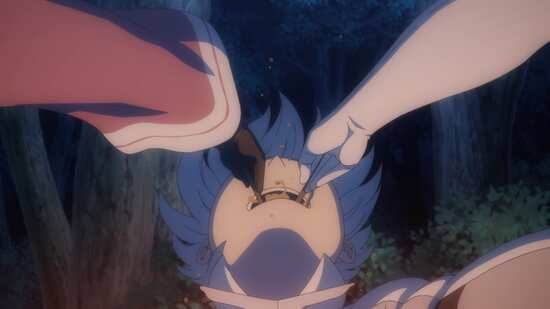 The disc boots to a static menu, and the sole extra is the Japanese Promo reel, 2 trailers running to 2:50. These suffer from overlapping subtitles making things hard to read. Thankfully the main feature is unaffected by this. 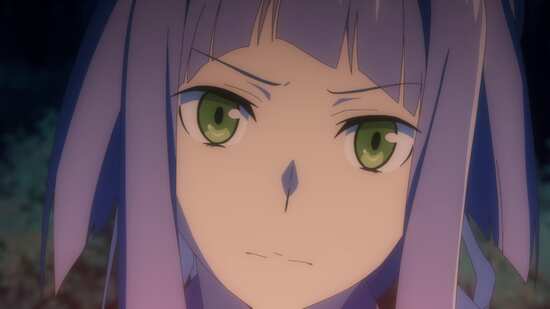 Arrow of the Orion is a typical spin-off movie from an established anime series. It’s an adventure that stands happily alone, which does nothing lasting to alter the characters or affect the ongoing narrative, it has a guest cast member to carry the emotional weight of the story (and should it prove necessary, be disposable to really jerk those tears), and the film must endeavour to give fan favourite characters from the franchise their due slice of screen time. This film follows that routine down to a tee, but that by no means implies that it’s un-enjoyable. When it comes down to it, I had a blast with Arrow of the Orion, a short, sweet film that doesn’t outlast its welcome. 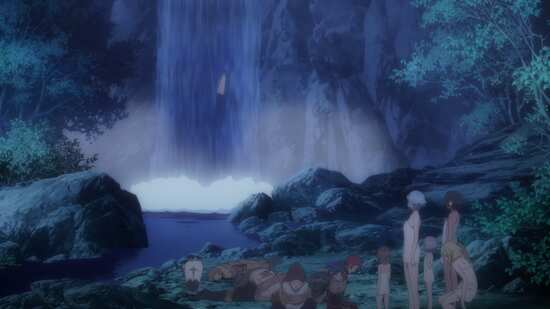 Artemis is the guest goddess, someone who has a shared past with Hestia, and who captures Bell’s attention when he pulls her spear from the stone. That’s obviously enough to invoke a little jealousy in Hestia, so that when the time comes to set forth on their quest to defeat Antares, Artemis and Bell are both joined by Hestia, the god Hermes, and Bell’s fellow adventurers Welf and Lili. The film hinges on the character dynamic that develops between Bell, Artemis and Hestia, and in this respect it works really well, enchants when it wants to, pulls at the heartstrings when it needs to, and while it may not play into the ongoing series, Bell has to face an aspect of interacting with gods and goddesses that he never expected. 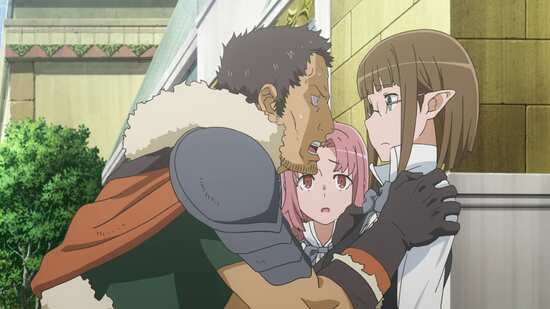 However, the film is short at just eighty minutes, and any side character cameos are just that, cameos. They really are there just to make up the numbers, and offer a little frisson for fans when their favourites make an appearance. It also means that the narrative is linear, without much room for nuance. If there are going to be twists in the plot, they’re telegraphed early enough to the point that they are hardly surprising. It’s a film that tells the story that it needs to and little more. As mentioned, it is a typical spin-off movie. 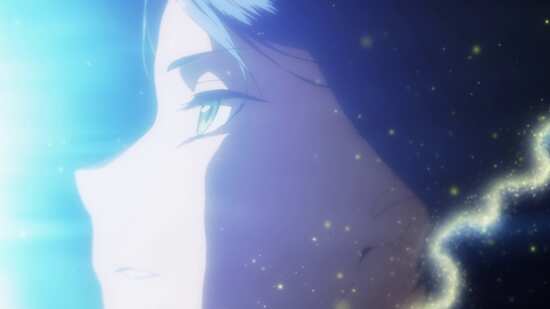 The film does look spectacular though, with some very nicely designed action sequences and cute character moments. While the opening of the film leans heavily on the myth of King Arthur, there’s a moment towards the climax of the film, where they enter the lair of the beast, which if anything is reminiscent of Aliens, although the particular look of the antagonist monsters is more akin to giant scorpions. If there is a weakness, there’s no villainous character to pin a face on, just a monster without personality. It’s a small nit to pick, but then again, Arrow of the Orion is a small film, beautifully animated certainly, but really just a nice companion to the series. It looks and sounds fantastic on this Blu-ray and is well worth getting if you are a fan of the Danmachi franchise. It’s not the best starting point to get into the series though.