Review for Highlander: The Search For Vengeance

The Highlander franchise is a perfect example of me falling in love with a franchise, and then falling out of love with it in relatively short order. Given the franchise catchphrase, “There can be only one!” it’s a little odd that Highlander is a franchise at all, but when I saw the first film, I fell in love with its story and characters, its music video aesthetics, and of course that epic Queen soundtrack. I fell so hard that I was desperate for more Highlander, and when subsequent films arrived, The Quickening and the Sorcerer, I was all on board with the circumlocutions of logic required to explain away their existence after the first film so emphatically ended the story. Sure, I’d accept aliens from the planet Zeist, or a bunch of immortals frozen in a cave. 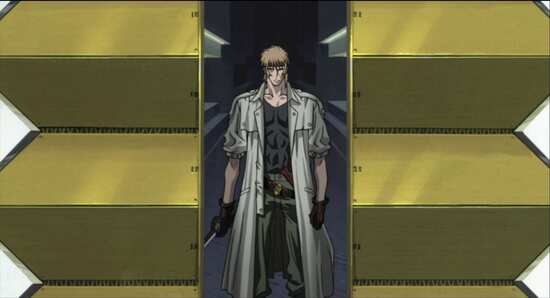 When the TV series spin-off appeared, it didn’t even try to explain its existence, and left it to the audience to try and retcon the franchise. Connor won a prize in the first movie, not the prize. And now, everyone was, or could be an immortal. I was still on board, even went as far as buying the spin-off novels. I watched the kids TV cartoon version of Highlander, but didn’t quite get around to the Raven spin-off. It’s around this time that the movies, a series still lumbering along, now combining the TV and movie worlds, gave me harsh dose of reality. Christopher Lambert was too old to play an immortal, and Adrian Paul was putting on the years as well. That sudden jolt made me re-evaluate the whole thing, and I came to the conclusion that aside from the original Highlander movie, it was all a bit crap really. The movie sequels, the TV series, those schlocky novels... I’d outgrown them all. 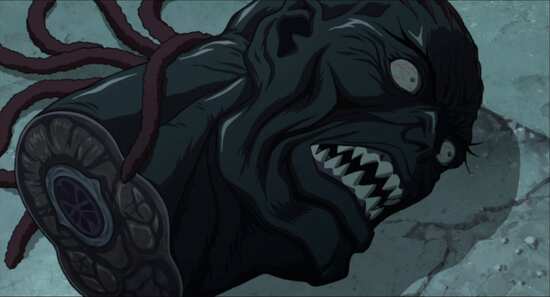 Except there is one other Highlander instalment that hasn’t aged too badly; in fact I’d say that it’s the only decent spin-off/sequel that the original film ever got. In 2007 Manga Entertainment brought Highlander: The Search for Vengeance to the UK, an anime film from the director of Ninja Scroll, Yoshiaki Kawajiri, a film that captures the essence of the original series, yet does something new, ignoring the other iterations, and telling its own story with new characters. I watched it with anime eyes originally, and thought that it was too westernised, deliberately created for US and European audiences. That’s absolutely true, but over the years, I’ve re-watched it as a lapsed Highlander fan, and it has grown on me to the point that I started seeking out a Blu-ray version to double dip to. And this time there really can be only one. As far as I can tell, The Search for Vengeance only got a Blu-ray release in France courtesy of Kazé Entertainment. Not even Japan got a Blu-ray, although they alone did get the longer director’s cut. The French Blu-ray is the same version as the UK release from Manga. 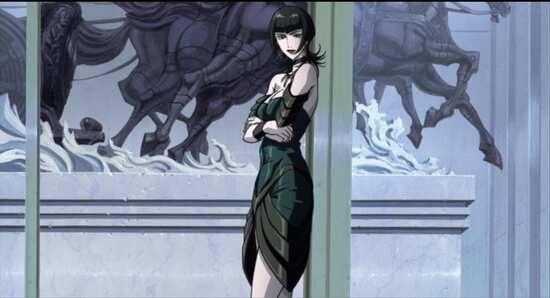 In AD 125, Colin MacLeod’s tribe was attacked and wiped out by the Romans led by Marcus Aurelius; and to emphasise his superiority, Marcus crucified Colin’s wife Moya. That Marcus Aurelius couldn’t die was shock enough, but that was nothing compared to the shock when Colin rose after being struck down. Fuelled by a thirst for revenge, and with a sarcastic spirit named Amergan for company, Colin pursued Marcus through the centuries, always failing to kill him. Over 2000 years later, with the world a post-apocalyptic ruin resulting from pollution, climate change and over-population, Colin finds Marcus again in the ruins of New York, where he’s planning to rebuild his empire. 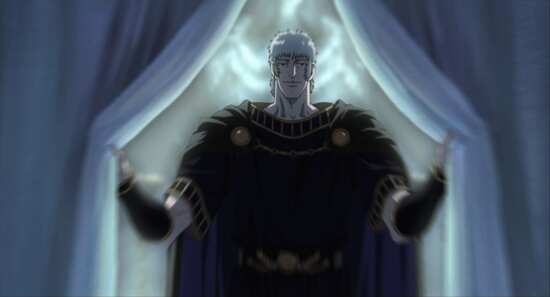 The film gets a 1.85:1 widescreen 1080p transfer and you have the choice of the original language DTS-HD MA 5.1 Surround, and PCM 2.0 Stereo English with French subtitles, and PCM 2.0 Stereo French with a signs only track. There’s no subtitle option in the menu, but thankfully you can turn off the subtitles via your remote (most Kazé discs are player locked). The image is clear and sharp, and other than a little banding, brings across the film well, with the muted colour palette that will be familiar from the DVD version. However this time there are no compression artefacts to mar the excellent action animation. But, this is an anime film from 2006, digitally animated from that time when the industry was just making the switch to HD, and consequently there is a soft, up-scaled feel to the animation, even though the line art is bold and crisp. The English surround audio is the way to go, nice and immersive, keeping the dialogue clear while making the most of the action and the music. 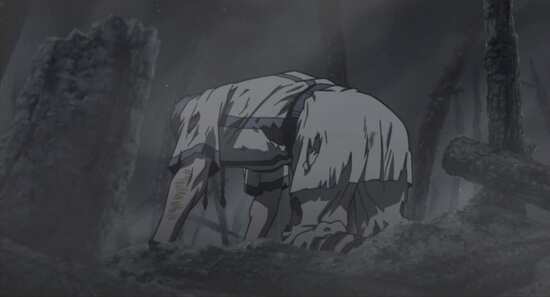 You get one disc in a thin BD Amaray case which closes with a latch. There is some nice inner sleeve art which deceptively looks reversible until you notice an absence of text on the inner spine. 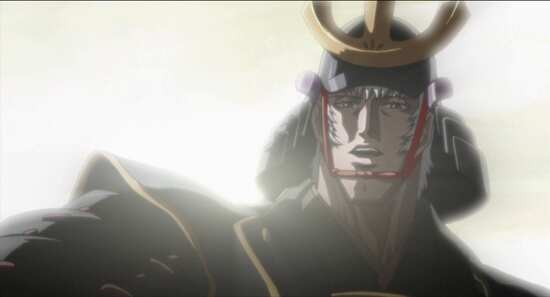 The disc autoplays trailers for Summer Wars and Brave Story before booting to an animated menu.

You’ll have to hold onto the Manga DVD for the extras, as there are none on this disc. 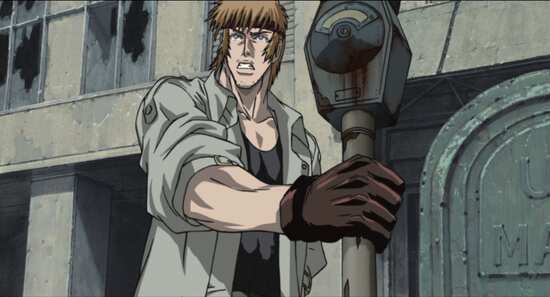 Kawajiri and Highlander is a perfect mix. Swordplay and action, larger than life characters, scenery chewing villains and imperfect heroes, and a cast of grotesques and the typically thin, elegant and sharp-nosed protagonists. If Gregory Widen hadn’t created Highlander to begin with, Kawajiri would have come up with something similar. The beauty of this film is that you don’t even need the baggage. Sure it helps to have seen the original film to get some idea of how this world works, but you don’t need to know much more than immortals, sword fights, decapitations and The Quickening; and you can even pick that much up as you go along with this film. It stands alone perfectly well. 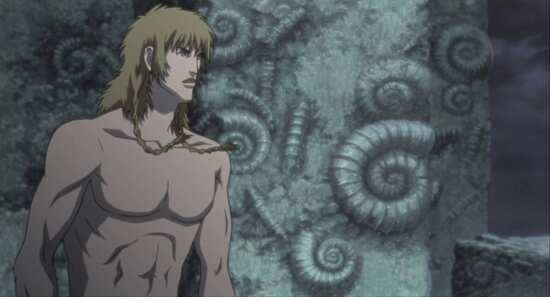 This is a post apocalyptic vision more akin to Fist Of The North Star. It provides a lawless future world that offers plenty of opportunities for some serious bloodletting, action is practically guaranteed. What this film does is capture the essence of the original Highlander movie. It’s got the pop culture feel to it, the simplicity of concept that doesn’t invite any serious thought. Immortals are among us, and they fight each other, killing each other by decapitation and resulting in an awesome light show. Throughout the centuries Colin MacLeod has been hunting Marcus Octavius, the man who murdered his wife, and he finds him in a post apocalyptic New York. The main story, as is typical for the genre follows him as he finally learns that vengeance is a wasteful self-destructive process, that he has wasted his life away, that he has betrayed the love of his wife. Once he learns this, then he is ready to kill the bad guy. Simplistic, self-serving morals, but what else would you want from an action movie. 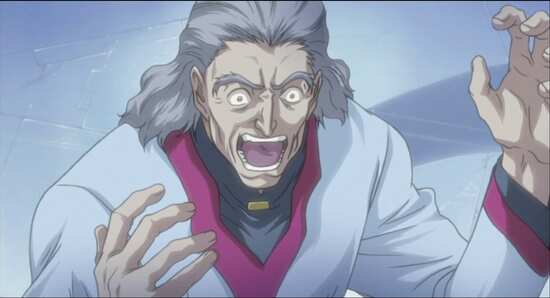 Where Search For Vengeance could have failed is if it got tangled up in continuity, back-story and mythology. Instead it ignores it. There’s no mention of any other MacLeod, no mention of the Watchers, no need to reconcile the story with anything else. In fact it goes a little too far in my opinion. There’s no mention of the Immortals battling for the Prize, and the implication is that they just hack away at each other for the thrill of it. That may be a function of the edits. Losing 15 minutes of the story definitely shows, some of the characterisations are thin, and there are a few plot holes that need filling. That is the one major drawback to this film. The animation is excellent, the story accessible and the action exceptional. It’s fun to watch, but it does on occasion feel as if someone has left the meat out of the sandwich. 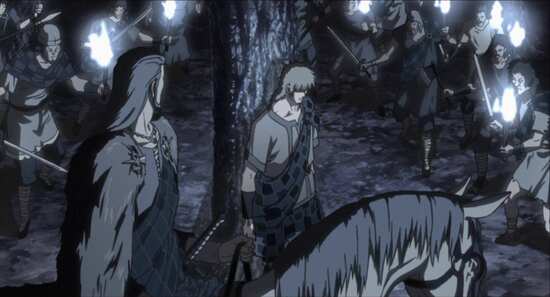 Highlander meets Ninja Scroll and manages to breathe life into a franchise that I had previously considered better off buried. It’s a Highlander film in almost every respect, good guys versus bad guys, swords a-swinging, heads a-flying, flashbacks through history, and the obligatory soft focus sex scene before the final confrontation. At this point in time, it looks as if we in the West will never get to see that director’s cut released. If you can find this Blu-ray though, it’s a nice upgrade from the UK DVD. The picture is marginally better minus all that compression, but the real benefit is in the audio. This is the best ‘sequel’ to Highlander, and given just how much material that first film spun-off, that’s saying something.