One of the most frustrating things in these days of declining physical media sales is the disappointments that latecomers face. At the height of VHS and DVD, you could expect a film or TV show to stay in print for years, and with dozens of high street chains, the chance of finding a lost gem on a dusty shelf somewhere was high. Not anymore, as diminishing interest in physical media has meant that print runs are shorter, while the online retail environment pretty much ensures that what is printed, eventually sells. I finally got around to Hellboy last year, having managed to ignore the hyperbole long enough, but unable to ignore the bargain bucket Director’s Edition of the first film on a supermarket shelf when the remake was released. Being the OCD kind of guy that I am, I instantly went looking for the sequel, only to find that it was out of print in the UK. In the end, I got Hellboy II: The Golden Army from Germany on import. And yes, I know I could have got the 4k release from last year, which has a Blu-ray disc as a bonus. What I didn’t know is that the Hellboy II Blu-ray release is now back UK e-tailer shelves. 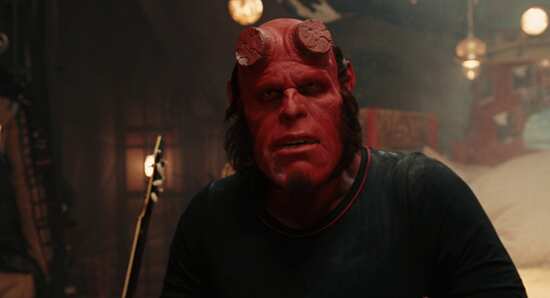 Long ago, there was a war between the humans and the elves, the goblins and the trolls. King Balor, overwhelmed by the rapacious humans, commissioned the creation of the Golden Army, a legion of mechanical warriors with no souls, created only to obey, and to kill without mercy. The army would be controlled by a crown, but in the end Balor had a change of heart, and instead forged a truce with the humans; that the elves would stay in their forests as long as the humans stayed in their cities, and the crown was broken in three, with one part given to the humans to ensure that the Golden Army would forever remain dormant. But one elf, the king’s son Prince Nuada disagreed, and vanished into exile. 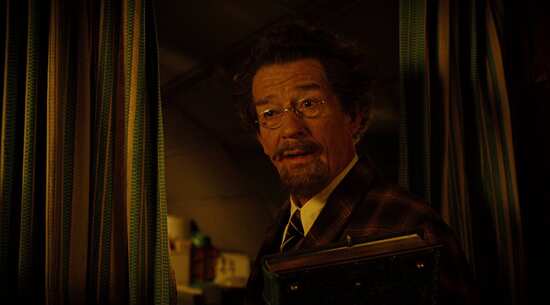 It sounds like a bedtime story, and it’s a story that Hellboy used to hear from Professor Broom as a boy. Now Hellboy’s all grown up, and having to deal with his fiery relationship with Liz Sherman. But the bedtime story is real, and Prince Nuada has returned, convinced that the humans have broken the truce, and through sheer force of numbers have driven the elves to the edge of extinction. He’ll do whatever it takes to recover the three pieces of the crown that control the Golden Army, even if it means turning against his own family. And the only ones that can stop him are the BPRD.

This is a 2-disc Special Edition from 2009 which has most of the extras on a DVD. 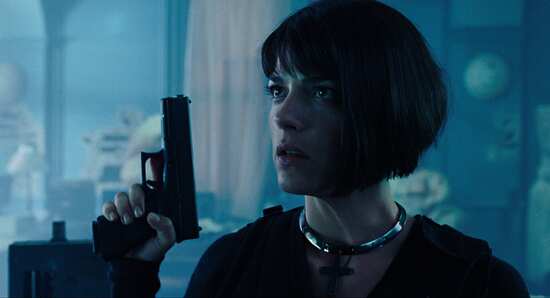 Hellboy gets a 1.85:1 widescreen 1080p transfer on the Blu-ray, with DTS-HD MA 7.1 Surround English, DTS 5.1 Surround German, French, Italian, Spanish, and Japanese with subtitles in these languages, plus Danish, Dutch, Norwegian, Swedish, Finnish, and Portuguese. It’s a great transfer on quite an early Blu-ray disc. The image is clear and sharp, colours are rich and strong, while detail levels are excellent. Dark detail, which is so important in this film, is solid, and the contrast levels are spot on. About the only thing to pick nits at might be how the CG has aged, but given how much of the effects in this film were done practically, it’s not much of an issue. The soundtrack is suitably bombastic and immersive, really showcasing the action well, while the music is quirky and quite eclectic at times. Barry Manilow owns Hellboy II. The dialogue is mostly clear throughout, while the elvish language gets English subtitles burned into the print. 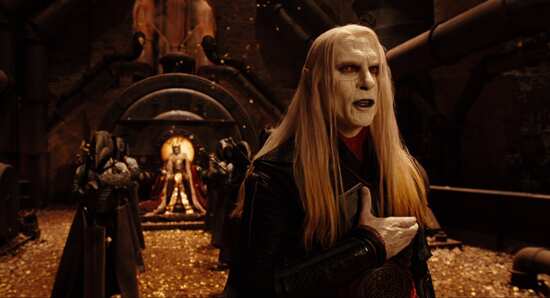 You get 2 discs in a thin BD Amaray, with one on each inner face. If the size of the German ratings logo offends, the sleeve is reversible. The disc boots to Universal’s stock animated menu, and you get BD-Live and U-Control, and all their usual gubbins.

With the movie you get two commentaries. The one with director Guillermo del Toro is subtitled in English. The one with actors Jeffrey Tambor, Selma Blair, and Luke Goss isn’t. Both are worth listening to. The director’s commentary gets a 22 second intro from the director. 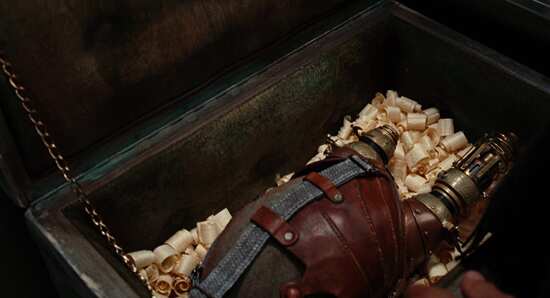 Also on the Blu-ray is the Comic Book Builder, which allows you to capture freeze frames from the film and turn them into a comic book of your own creation. I couldn’t be bothered, as it’s just too slow and counterintuitive for what is little more than a gimmick.

The Easter Egg on this disc comprises 3:03 of Bloopers.

Most of the goodies are on the DVD, which is PAL format in this German release. 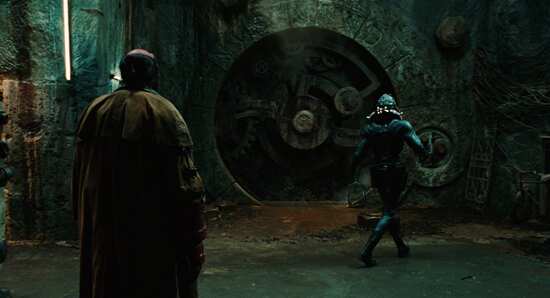 The Prologue is a 23 second intro to the extras from Guillermo del Toro.

Hellboy: In Service of the Demon is the feature length making of documentary, which lasts 154:50, although you can watch the 19 chapters individually. 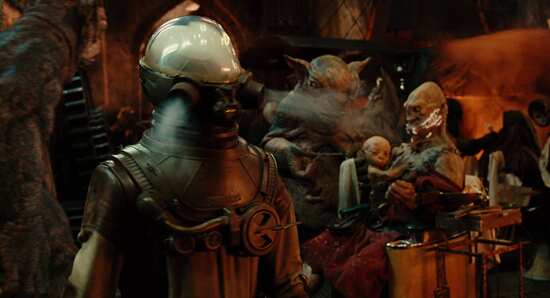 Troll Market Tour with Guillermo del Toro lasts 12:23, as the director guides us through the set.

Zinco Epilogue Animated Comic lasts 5:16 and is an odd curiosity.

Finally there are 6 Deleted Scenes with optional director’s commentary running to a total of 5:03. 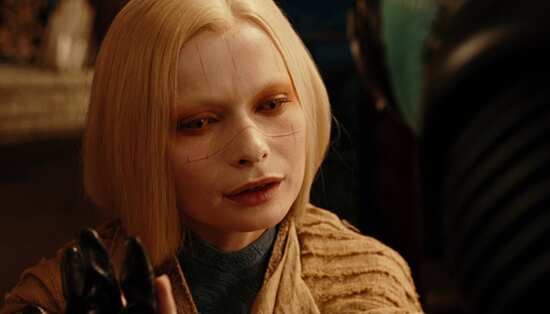 I enjoyed the original Hellboy, but it didn’t quite hit me in the way that it impressed so many fans. I felt that it was imbalanced in terms of character, with Hellboy really overwhelming the supporting cast, let alone the weakness of the film’s villains. But it was a whole lot of fun, and it delivered a comic book experience that stepped away from the Marvel and DC multiplex fillers that so inundate cinema these days. Hellboy II addresses all of the criticisms that I had with the original film, and it’s a whole lot more entertaining to boot. 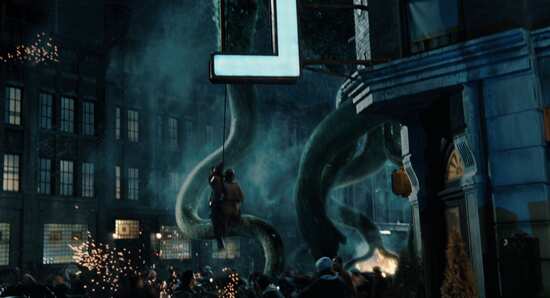 That’s one of the good things about sequels which move the story on rather than rehash it. The characters have been established and they can now develop further, and as we learn in this movie, Hellboy and Liz are in a relationship, albeit a relationship with issues. Manning is now in charge of the BPRD, and he doesn’t work well with Hellboy, and Hellboy still wants a piece of the outside world, to come out of the shadows. This film also develops Abe Sapien in an interesting way, giving him a love interest as well, while a new agent is introduced, Johannes Krauss, a striking, insectile presence indeed. 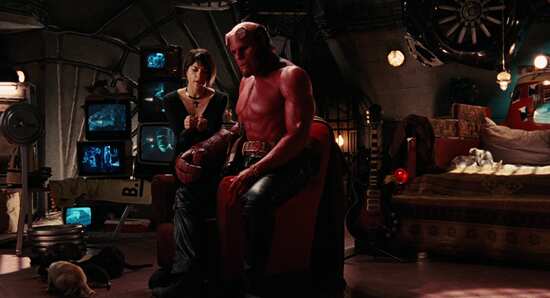 The antagonists in the film are also grand and mythical, although it does appear that after Blade II, Luke Goss got a little typecast when it comes to sallow-faced characters. We’re in Lord of the Rings territory with this tale of parallel worlds, with elves and trolls and the like. There’s sort of a Harry Potter transition between worlds at one point, juxtaposing the realistic with the magical. What makes the difference here is that the antagonists are sympathetic; certainly a lot more sympathetic than the goose-stepping villains of the first film. Here it’s a more of a case of nature fighting back against overpopulation and pollution, in the form of elves deciding to do away with the humans. But you can understand their point of view, and given how the public react to Hellboy, as well as established prophecy, you can understand why the character might have pause for thought when Nuada tempts him. It makes for a more interesting and nuanced story. 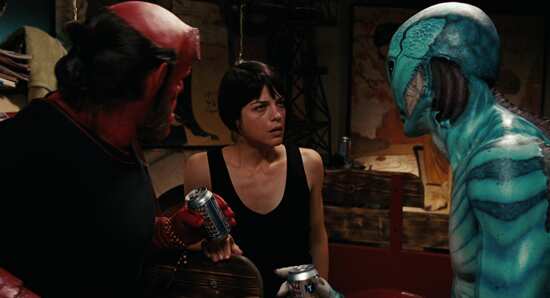 What I love best about Hellboy II however is the sense of humour. It’s always in keeping with the tone of the film and the story, but there is such a rich vein of character comedy here that I was laughing more at Hellboy II than I have done at genre comedy films. Hellboy II was hard to find on Blu-ray in the UK for a while, and if you got the 4k release for the BD disc, you’ll have missed out on these gorgeous extra features. The making of documentary is far more involved and detailed than most films get these days. But the German release is still available, and the image and audio quality still impresses, and the UK disc is back on e-tailer shelves too.