It’s a common frustration for the UK anime fan, the series left in hiatus. The smaller market means that margins are tight, and distributors are liable to drop continuations of series when they don’t perform. It’s not just the bad shows that get dropped, although I can accept the UK not getting more MAR or Voltron, but when it’s something like Initial D, or Yu Yu Hakusho it starts to get under the skin. When it’s the really good shows, shows like Food Wars or Haikyu, you start to wonder just what the British anime buying public are up to. It’s when the shows that you fall in love with are pulled that you can really start swearing a blue streak. All the Anime released Season 1 of Sound Euphonium; one of the best creations to come out of Japanese dream makers, Kyoto Animation, and that was it. Much as people message them on forums or prod them on social media, not a peep has been heard regarding the second season or any of the movies. 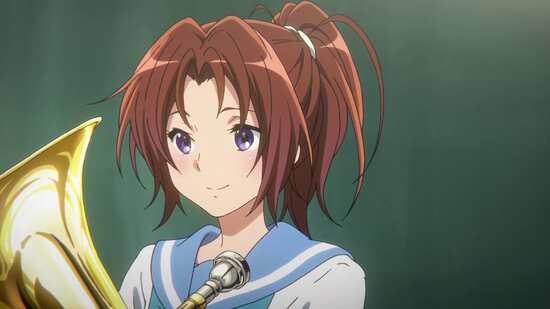 Now it has to be said that Sound Euphonium Season 1 from All the Anime had a few issues when it came to the transfer, and especially the subtitling, but one issue it didn’t have was with the price. Pony Canyon in the US, one of those boutique special edition labels released both seasons there, and one issue that they do have is with the price. I’ve been reluctant to open my wallet (I didn’t think it could open that wide), but the more All the Anime have remained schtum, the itchier my fingers got. So once it was confirmed that Pony Canyon’s release was Region B compatible, I placed an order. Actually I placed two, as Pony Canyon released Season 2 in two parts. If you think that’s bad, they released Season 1 in 3 parts... 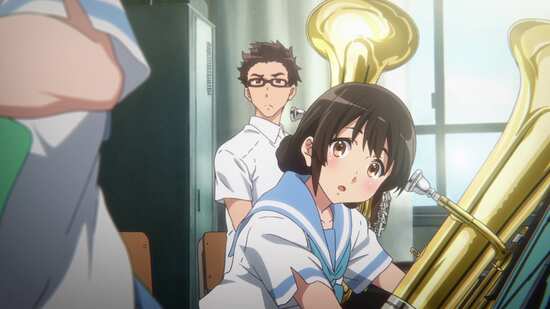 Kumiko Oumae played the euphonium in the school band in middle school, and when it came to local competitions, she was delighted when her school won gold, even if it wasn’t sufficient to get into the national competition. But for trumpet player Reina Kousaka, the frustration of a ‘dud’ gold was unbearable. Starting at Kitauji High School, Kumiko’s decided to turn over a new leaf, and has chosen not to join the band. That vow lasts as long it takes to make her first new friends, Sapphire Kawashima and Hazuki Katou. Sapphire plays contrabass, and Hazuki wants to learn an instrument, so they pay a visit to the school band, and Kumiko gets persuaded to join as well. That’s before she learns that Reina Kousaka goes to Kitauji too, and she’s joined the band aiming for big things. The band has the ambition to make it to the Nationals, but the reality is that they kind of suck, and the new advisor Taki-sensei demands their utmost efforts if he’ll support them in any kind of competition. Poor musicianship is the least of their problems. 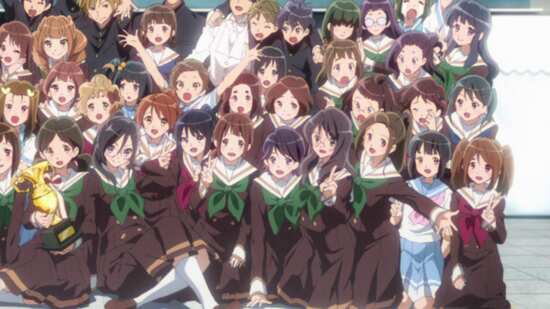 The first six episodes of Sound Euphonium Season 2, including the double length first episode, are presented across 2 Blu-rays from Pony Canyon. 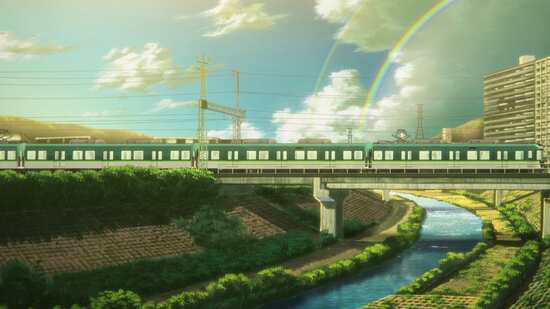 Sound Euphonium gets a 1.78:1 widescreen 1080p transfer on these discs. It’s a KyoAni show, and it’s the pinnacle of their achievement in television animation. It’s a show that looks absolutely gorgeous, delightful character designs and a world design that borders on the photo-real, with effects and style used to give the show a cinematic sensibility. The animation is smooth, detailed and driven by character. Of course a lot of time and attention has gone into making the musicianship, the playing of the various instruments look authentic. Unlike All the Anime, Pony Canyon pull out all the stops with the transfer, using two dual layer Blu-rays for the first six episodes. I’ve read on a forum that the episodes on the discs are encoded identically to the Japanese releases, and it makes sense given how good they look; no compression, no aliasing, and no digital banding. This is how I wish that All the Anime’s release was. But there is a price to pay for all this fidelity... literally. 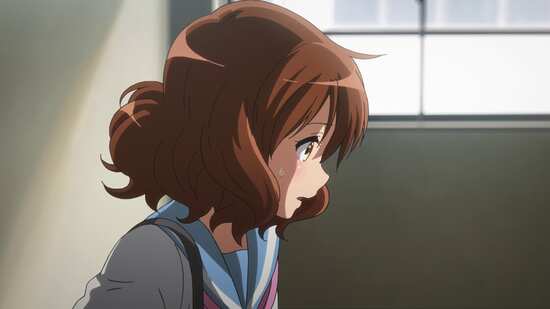 Your sole audio option on this release is the PCM 2.0 Stereo Japanese track, which is just fine, bringing across the majesty and grandeur of the orchestra delightfully well. The dialogue is clear, and the music is enervating. The actors are perfectly suited to their roles, and the subtitles are accurately timed and free of typos. There may not be any subtitle lyric translations for the theme songs, but in the show, the subtitles are perfectly presented, with no issues with on screen text in the way that marred the All the Anime release of season 1. 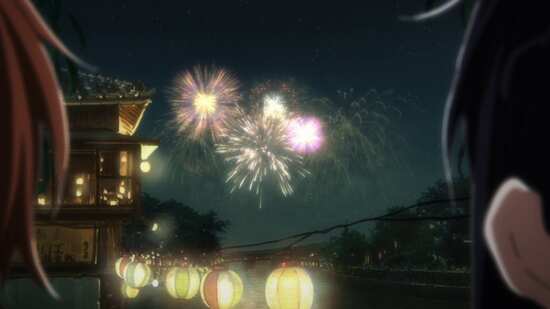 The two discs are presented in a Black DVD Amaray case, one on each inner face (the black must be a mistake as the inner sleeve has some nice artwork on it hidden behind the black plastic). It’s all wrapped in an o-card slipcover, so there’s lots of art to look at. There are also 3 double-sided art cards in the case.

The discs boot to static menus, 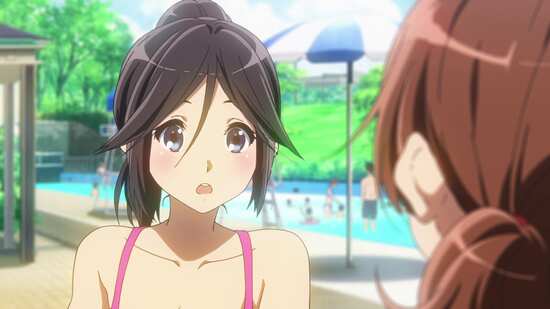 You get the textless credits, and finally there is the CM-PV Collection lasting 4:12, trailers by any other name. 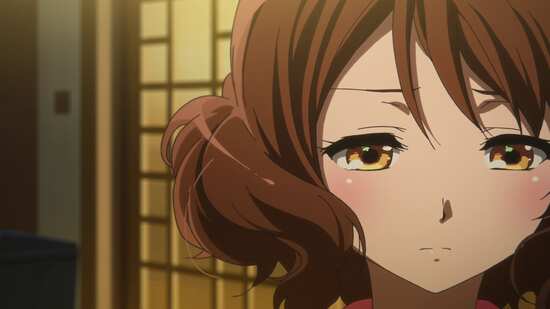 If you loved Sound Euphonium Season 1, then you’re going to love Season 2 as well, as it offers more of the same. You get more of the same characters, more of the same music, and most tellingly, more of the same sublime storytelling and breathtaking animation from Kyoto Animation. Sound Euphonium told the story of the dysfunctional school band with a chequered history, but with an ambition to reach the national championships, brought together by an unconventional teacher, and forced to work out their various personality conflicts and issues. This was all seen through the eyes of euphonium player Kumiko Oumae, who herself had to resolve a personality clash with trumpet virtuoso Reina Kousaka before they became fast friends. KyoAni may excel at the slice of life comedy, but with Sound Euphonium they layered in enough in the way of character story arcs and interpersonal drama to make it a really compelling watch. 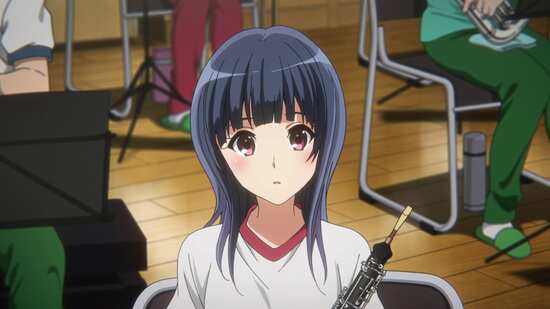 Season 2 is no different in that regard. The band may have come together to the point where they were able to compete in, and win the local competitions, but that is a far cry from being good enough for the nationals. More training and practice ensues, and as the summer holidays beckon, that includes a three-day intensive training camp, where two new instructors are introduced, percussionist Masahiro Hashimoto, and woodwind specialist Satomi Niiyama, and both know the teacher Taki from their student days. All of this is in aid of the upcoming Kansai competition, the last step before the nationals. 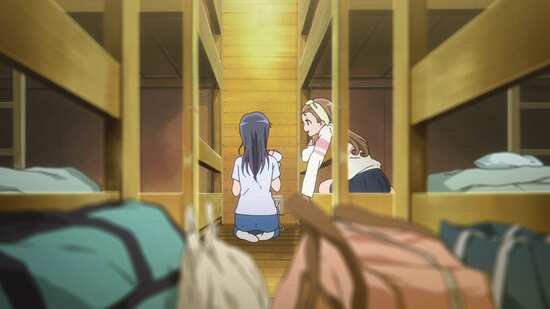 Yet personalities still clash. With the resurgence of the school band, following the disaster the previous year when the second years quit en masse in the face of dispiriting 3rd year posturing and politicking, one of those who quit, a flautist named Nozomi, decides that she wants to be part of the band again. She keeps trying again and again to get the vice president Asuka to let her rejoin, but the easy going Asuka is having none of it. Kumiko wants to help and gets caught in the middle, when it transpires that one of the second years that didn’t quit, the oboe player Yoruizuka, now can’t bear the sight of Nozomi. The band only has one oboe player, but it has flautists, so the decision seems set in stone. On top of that, Reina’s crush on Taki-sensei continues, which makes it all the more harder for Kumiko when she learns something of Taki’s past. And Kumiko’s home life gets more complicated as well. And there’s still time for a swimsuit excursion to the pool, and a school festival episode as well. 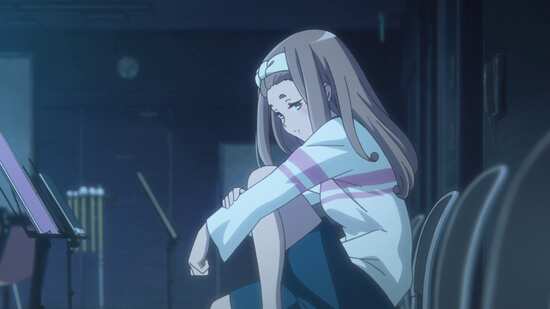 I can’t recommend this release. I love the show just as much as the first season, if not more, and it is a straight up 10/10 for me. But that price! Pony Canyon have an RRP of $99.99 for six episodes of season 2, and the second half costs just as much. With the usual e-tailer discount applied, and with shipping taken into account, I paid close to £150 for the entirety of season 2. It’s worse with the first season, which was split into three parts at $89.98 RRP each. Those were at least collector’s editions worthy of the name; Season 2 gets Amaray cases with o-cards. Anime Limited’s release was marred by poor presentation, but Pony Canyon ask a sum that isn’t commensurate with the physical quality of the goods that they supply. The on-disc presentation is immaculate, the image quality outstanding and the audio and subtitling free of issues, but to look at, it is the most expensive mid-budget release I have ever bought. Still the quality is such that I now wish that I had shelled out the £200 it would have taken to get season 1 imported before it started going out of print. 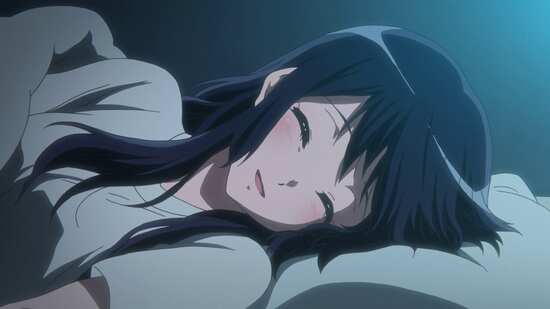 So the bottom line is if you love Sound Euphonium enough, then getting Pony Canyon’s Season 2 from the US is well worth it. But it has got to be a whole lot of love, £150 worth of love.