Review for When Marnie Was There - Special Edition

That turned into quite the journey. When I reviewed When Marnie Was There originally, I was sent the DVD check discs, and I loved the film so much, that before I had even typed a word of the review, I had placed an order for the Blu-ray. That came in short order, but it came faulty. That first batch of discs were authored in such a way that the Blu-ray player was always scanning back and forth for the next bit of data, resulting in a whole lot of grinding and clunking from the laser assembly. It was loud enough to drown out the quieter moments of the film, as well as seriously threaten the integrity of my Blu-ray player. There followed the disc replacement programme, which took several months, but eventually I did get the replacement, which the retailer kindly upgraded to the Collector’s Edition for my troubles. A win-win for me, but it did mean that urgent desire to get the Blu-ray reviewed got lost in the wait. But, the disc has finally made it to the top of my review pile. 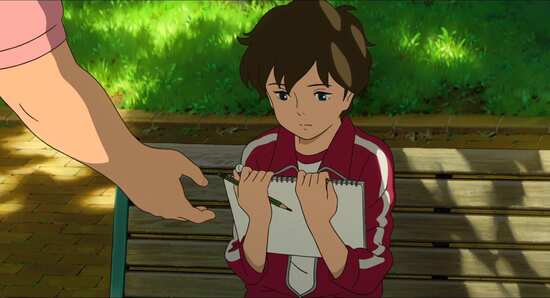 Anna Sasaki is the introverted, quiet girl in class. She’s got a talent for art, but she tends to keep to herself, unwilling to engage with other children, not exactly trusting of the world. On top of that she suffers from asthma, exacerbated by anxiety. Her doctor suggests getting away from the city for a while, and her mother sends her to live with her aunt and uncle in a sleepy seaside village. Certainly the sea air has a positive effect, and the landscape around the bay inspires the artist in her. But Anna still has problems associating with children her own age, and resents being made to ‘take part’. Which makes her fascination with the Marsh House atypical. It’s a mansion that is built on the water’s edge, although at low tide it’s accessible by foot. By day it looks abandoned, but at night, the lights come on, and Anna can see a blonde haired girl in the bedroom window. 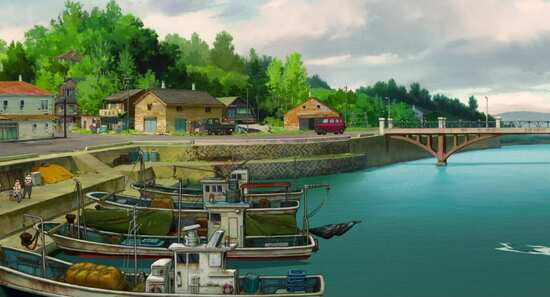 The girl is Marnie and the two soon meet, and unexpectedly become friends. Anna’s a lonely, introverted girl who shies away from the world, and as she reveals to Marnie, has a past that causes her pain. Marnie on the other hand has two wonderful parents who love throwing extravagant parties, and treat their daughter like a princess. But as they get to know each other, they learn that they have a surprising amount in common.

The collector’s edition bundles the Blu-ray with the feature DVD along with some physical extras. 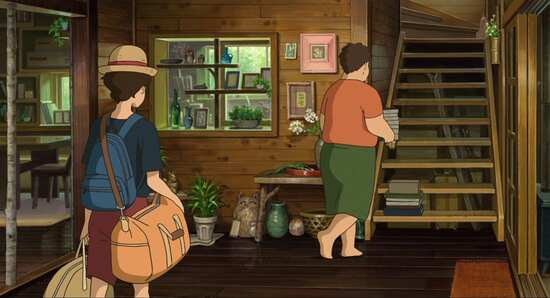 When Marnie Was There gets a 1.85:1 widescreen 1080p transfer on the Blu-ray. The DVD is identical to the film disc I reviewed before; although this time the extras are confined to the Blu-ray. It’s a strong transfer, which certainly looks the part. The image is clear and sharp, colours are lush and consistent, and the character designs conform to the Ghibli norms. There is a small issue of a stutter to the animation during pans and scrolls. It isn’t enough to diminish my enjoyment of the film, but it is an imperfection. 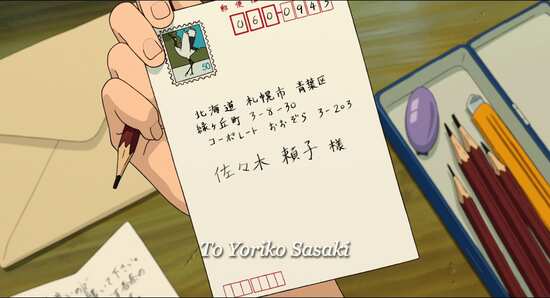 The HD presentation really brings out the detail and the realism applied to the backgrounds and settings, and it’s a beautiful looking film. This is an artists’ film, not least because of the characters of Anna and Hisako, but also the way the world is presented, the sleepy seaside town having the typical Ghibli European influences, the wonderful retro-world of Marnie and her family, as well as Anna’s artisan uncle and his hand-crafted home. 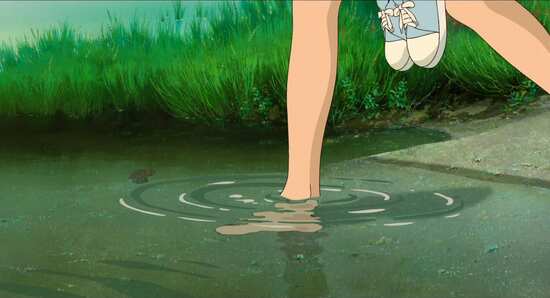 You have the choice between DTS-HD MA 5.0 Surround English and Japanese, with optional translated subtitles and a hard of hearing track, subs and dubs. The signs and text translations are burnt onto the print during the film, which is a bit of a shame. The dialogue is clear throughout, the surround offers a nice level of immersion, although this is more a dramatic film rather than one replete with action, and the film’s music reflects the emotional nature of the story perfectly. I gave the dub a try, and as you’d expect for a top tier Ghibli movie, it gets a brilliant dub, ideally cast and performed. 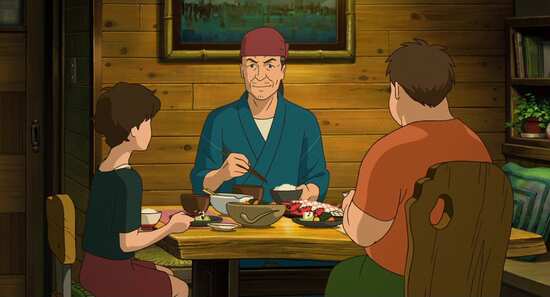 You get 2 discs held in a digipack, which slips in a thin card slipcase. There is a whole lot of pretty art to look at on the packaging, but you also get five postcards with more art.

The Blu-ray boots to an animated menu.

The Storyboards are the picture in picture kind which appear in the lower right hand corner. 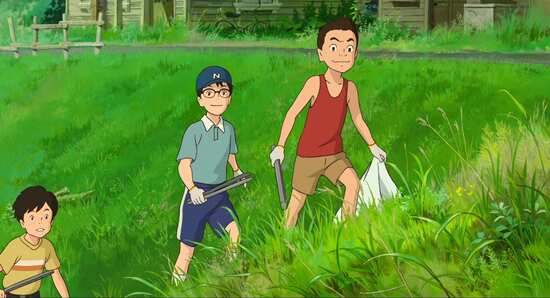 Behind The Scenes with the English Voice Cast is a collection of interviews that runs to 12:36.

Making of When Marnie Was There lasts 42:34 and is a Japanese language documentary that goes behind the scenes of the film, following the staff as they create the animation, the cast as they record the voices, a look at the locations, and how the film was received and more. 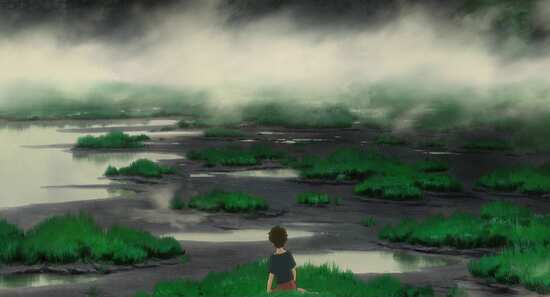 Yohei Taneda Creates the Art of When Marnie Was There lasts 17:10 and offers another telling of the story, apparently using the Marnie exhibit at the Ghibli museum.

You get the Original Japanese Trailers and TV Spots (6:07) for the film, and finally there are further Ghibli Collection trailers, for The Wind Rises, From Up On Poppy Hill, and a general Ghibli trailer. 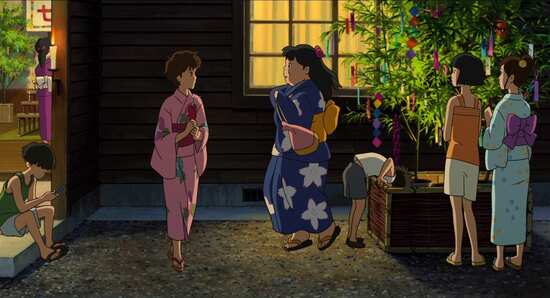 For me there have been two periods of Ghibli, pre-Spirited Away, when the studio could do no wrong, and post Spirited Away, when commercial concerns started having a greater influence. In particular, Hayao Miyazaki’s movies tended more towards the fairy tale, and younger audiences, culminating in what for me was the studio’s most commercial film of all, Ponyo. There was also an increasing tendency to adapt European literature in films like Howl’s Moving Castle, Tales from Earthsea, and The Secret World of Arrietty. While the latter films are well made, and entertaining, other than a few exceptions such as From Up On Poppy Hill, I’ve always thought that they’ve lacked for some quintessential Ghibli magic, which the earlier films had. I certainly had my niggling doubts about When Marnie Was There for the same reason. 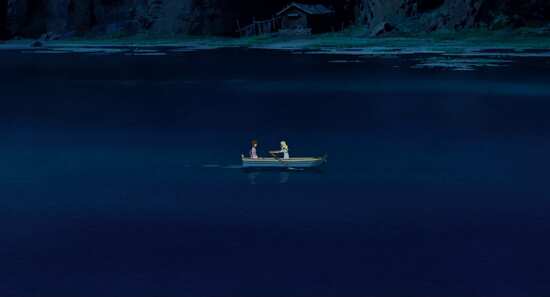 After all, it too is based on an English novel of the same name by Joan G. Robinson, with the Norfolk setting of the novel transposed to a seaside village in Japan. There’s also a bit of verbal misdirection at the start of the film, with Anna’s narration about magic circles initially putting me in mind of the kind of magical, fairytale fantasies that Uncle Hayao had been making of late. It’s a short lived concern, as it becomes clear that Anna is talking about her own isolation, her status as outsider and her inability to fit in. To cut a long story short, When Marnie Was There is one of the finest Ghibli movies I have seen in a long time, and it very much feels as if it belongs pre-Spirited Away, not post. 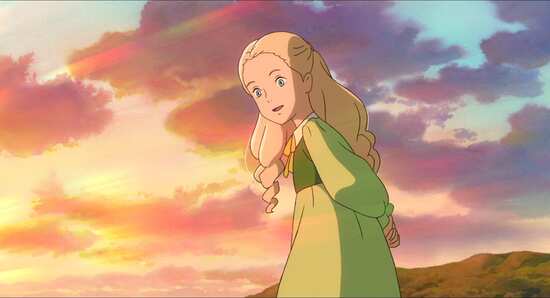 It’s spiritual kin to films like Only Yesterday and Whisper of the Heart, where the character arcs play a stronger part in the story than the mechanisms of narrative or the fantastical nature of the story world. Not that those elements are absent from When Marnie Was There. There is a strong magical aspect to the story that manages to enchant and captivate, but really it’s a coming of age story about two girls that meet under mysterious circumstances and become the best of friends. 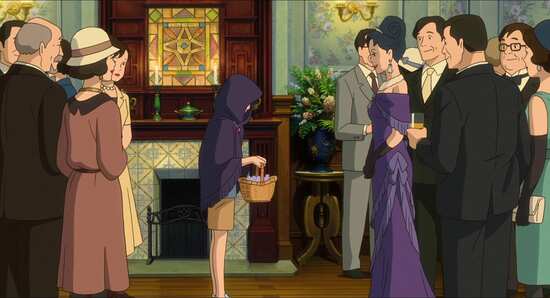 Also, much as the film is typically beautiful, the magical elements of the story coming together to enrich and make its world more elaborate, moments of comedy lightening the mood and keeping the pace swift and breezy. The film doesn’t shy away from the drama, or addressing some very real world concerns for its characters. What really draws Marnie and Anna together are some shared worries about their lives. While Marnie is the picture of an adored princess, the truth is that her parents, when they aren’t at home cherishing their daughter and throwing parties, are off trotting the globe, leaving Marnie in the care of the domestic help. And quite frankly the maids and the housekeeper tend to bully their young charge when her parents are away. 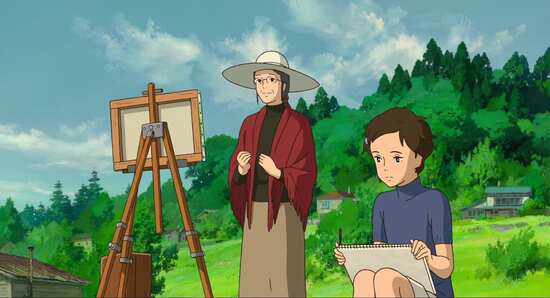 At the same time, it rapidly becomes clear that Anna is a foster child, orphaned when her parents died, and raised instead by her ‘mother’ Yoriko. That she’s fostered isn’t a surprise to her, instead it’s when she finds out that her foster parents are paid to take care of her by a government subsidy, that she turns introverted and stops trusting the world. After all, how can she know if Yoriko actually loves her, or is just paid to love her? It also makes her curious about her past, and what kind of family it was that abandoned her. Both Anna and Marnie are looking for love and attention, so when they meet, they’re more like sisters than simple friends. 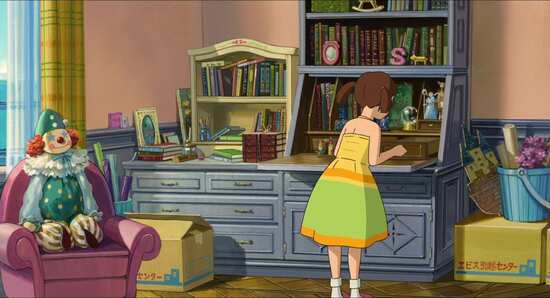 But there is also a dangerous overtone to the story, a mystical sense to their meetings, the mystery of the Marsh House looking abandoned by day, only to be lit up at night, and Anna’s encounters with Marnie always ending abruptly, strangely. The story as it unfolds has just the right degree of foreshadowing to make the end of the movie work perfectly, and I’d defy anyone to not shed a tear or three at the conclusion. If this really is the final legacy of Studio Ghibli, if we really do never see another movie from them, then When Marnie Was There is the perfect note with which to underline the thirty year history of the studio. 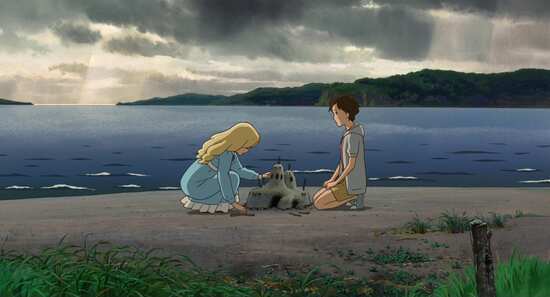 When Marnie Was There was great on DVD, and it’s downright brilliant on Blu-ray, especially a Blu-ray that works. And I had left it long enough since I had last watched it to have forgotten the film, and rediscovering just what makes the story so special made it just as enchanting an experience the second time around. If you have missed out on this film’s wonderful story, then you really should remedy that.