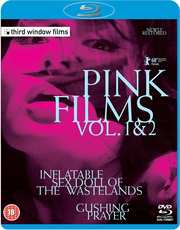 Synopsis:
Atsushi Yamatoya s Inflatable Sex Doll of the Wastelands is a deliciously delirious cult film about a hitman (Yuichi Minato) who is hired by a rich real estate agent to find an abducted woman (Noriko Tatsumi). This simple setup gives way to a hip and chaotic worldview full of hard-boiled characters, sexy action, and hallucinatory imagery. A close collaborator with the likes of Koji Wakamatsu, Yamatoya was part of the group of anonymous writers who worked on Wakamatsu Productions and was also one of the anonymous writers on the script of Seijun Suzuki s Branded to Kill. In his book Behind the Pink Curtain, Jasper Sharp calls the film probably the most idiosyncratic work the genre has ever produced.

The most cryptic and formally radical pink film from the most politically radical director ever to work in the field: GUSHING PRAYER deploys actual suicide notes and a haunting guitar refrain by folk musician Minami Masato to express the spiritual and political left vacuum in the wake of the failed student movements of the 1960s. The cinematography by Itô Hideo, who also shot Ôshima Nagisha's IN THE REALM OF THE SENSES (1976), captures an intriguing melding of the documentary with the cinematic.