Review for Blood Blockade Battlefront & Beyond

Once more, I’m trying to remedy the complete mess that Funimation titles in the UK have turned out to be. Funimation have been around the houses when it comes to releasing here, from MVM to Revelation, to Manga to Anime Limited, and back to Manga again (hopefully this will be permanent given that they now own Manga Entertainment). The problem being that each time that they switched distributors, titles got lost in the transition. Manga released High School DxD’s first season, Anime Limited released the third, and we never got the second in the UK. In the hiatus between Anime Limited and switching back to Manga, several titles got lost in the transition, and recently, I’ve been importing missing bits from Australia to fill in the gaps. So far, that’s comprised the first season of Free, the second season of Love Live Sunshine (now finally announced for UK release), the Black Butler Movie and OVA, and the series that I most wanted released in the UK, this, Blood Blockade Battlefront & Beyond. Blood Blockade Battlefront is based on the manga by Yasuhiro Nightow, the creator of the epic Trigun and the brilliant Gungrave, so you can see why I so lamented the absence of Blood Blockade Battlefront & Beyond given that Anime Limited released the first season, Blood Blockade Battlefront. 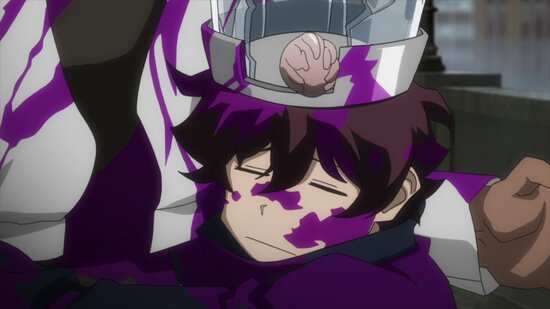 Three years previously, hell broke loose in New York City... literally. The walls between worlds collapsed, and our world and Alterworld tore into each other. A mystical barrier was erected in time to prevent the damage from spreading, but where New York used to be now stands the city of Hellsalem’s Lot, where humans and demons co-exist, after a fashion. Protecting the fragile peace between the two realms is a group called Libra, and a rookie reporter named Leonardo Watch gets recruited by them after a case of mistaken identity. The mild mannered Leo could be out of his depth amid these super-humans, except for a demonic encounter he shared with his sister, during which for the sacrifice of her sight, he was gifted the ‘All-Seeing Eyes of the Gods’. With the kind of trouble Libra seeks out and has to deal with, he’s going to need them. 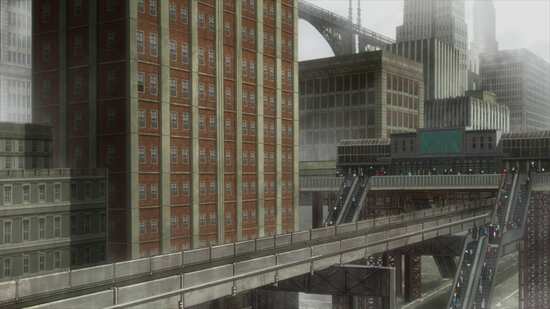 12 episodes of Blood Blockade Battlefront & Beyond are presented across two Blu-rays and two DVDs from Madman Entertainment. 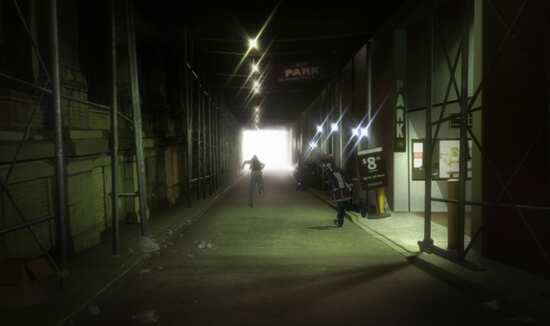 Blood Blockade Battlefront & Beyond gets a 1.78:1 widescreen 1080p transfer, and given the visual complexity and extravagance of the show, it is a good one. I say that because there is a lot of action, mayhem, and destruction in the show, raising clouds of smoke and dust. It’s also a very atmospheric and moody animation, so expect darker scenes, misty scenes, and a lot of busy backgrounds. So yes, there is digital banding on this Blu-ray, but it certainly isn’t to an excessive or distracting degree, and you’ll have to go looking for it. 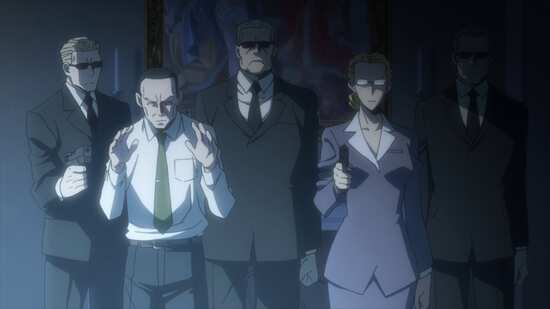 The image is clear and sharp throughout, colours are consistent, and the animation comes across without issue. The show is a little old school when it comes to character designs, and not just the wide variety of supernatural beings, demons, and monsters. The human character designs tend to the more comic in style, so coupled with modern animation techniques, CG backgrounds and the like, it feels like a late nineties anime given a 21st Century makeover (or the Trigun movie). Studio Bones hit this one out of the park in terms of animation quality; it’s detailed, energetic, and utterly stylish. And this being a Nightow joint, there is a black cat cameo. 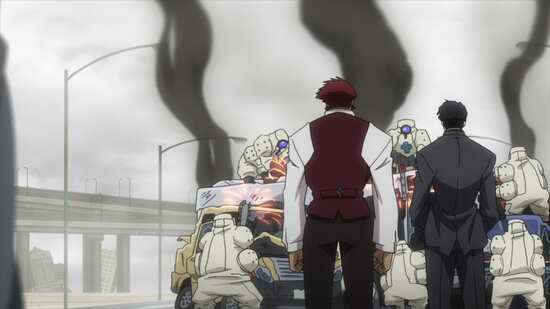 You have the choice between Dolby True HD 5.1 Surround English, 2.0 Stereo Japanese, with optional translated subtitles and a signs only track. It’s nice to have control over your own discs once in a while. The audio is fine, with a brilliant music soundtrack, great action sequences, and top tier voice actor performances in both English and Japanese. Yes, this is one of those rare instances where I feel an English dub does an anime justice, and I’d be happy to watch either version. The subtitles are accurately timed and this time free of typos. 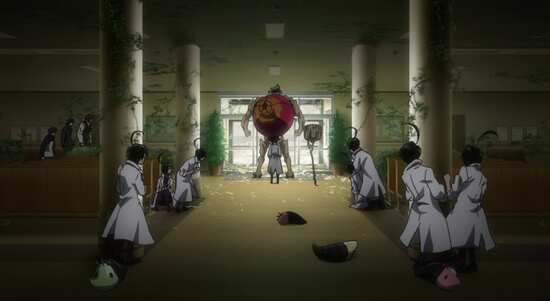 You get 4 discs in a BD Amaray case, 1 disc front and back, and 2 either side of a centrally hinged panel. The episode listing is on the inner sleeve. I notice once again that Madman’s BD cases aren’t the most robust, and have a hard time holding onto discs, especially during transit. Expect loose discs if you import this release. 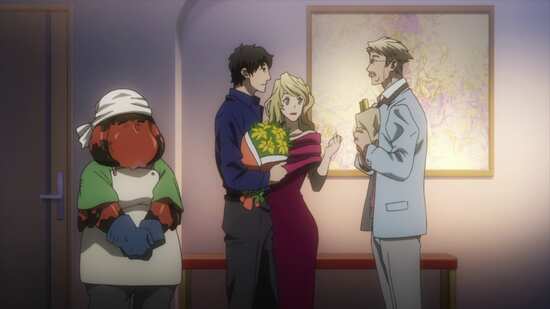 Disc 1 autoplays a trailer for Twin Star Exorcists Part 3, Disc 2 kicks off with the Vanishing Line: Guro trailer, and that is where the extras reside. 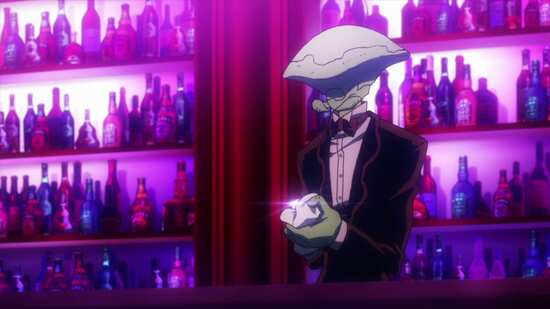 You get 3:17 worth of Promo Videos, 49 seconds of TV Spots, a 3:46 Commercial Collection, and the Textless Credits. 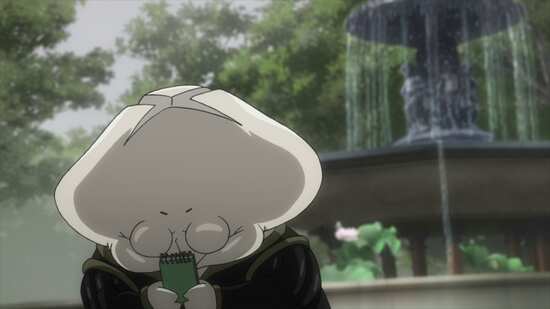 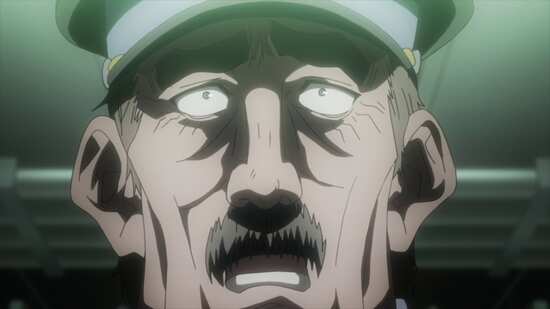 Some of it must no doubt have to do with the time that I watch the show, but I have no such problem watching other anime at that late hour, shows which are nowhere near as accomplished as this one, yet which manage to hold my attention. Some of it might actually have to do with the density of the plot and profusion of ideas in each episode. There is just so much to take in with each 20 minute episode, that you have to be on the ball, hanging on every word, and glued to the screen as if you’re doing QC on the disc to make sure that you get all that is relevant. That kind of effort can tire, and it’s fair to say that this isn’t a show you want to binge-watch. It’s much better taken in an episode a day or so. 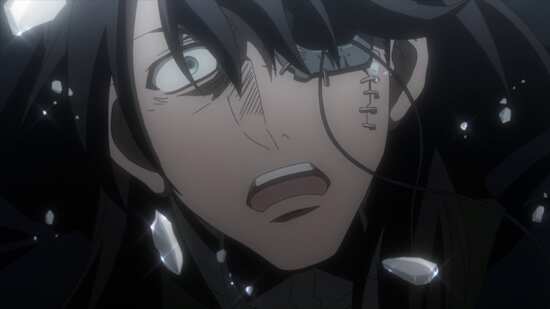 The answer might lie in comparing this show to Yasuhiro Nightow’s past works. Trigun was a comedy drama with a heavy emphasis on the comedy. The goofy antics of Vash the Stampede, Milly, Meryl and Wolfwood often stood in contrast with the dark storylines, and particularly the Knives arc. Gungrave on the other hand tilted more towards drama than comedy and very effectively so. Blood Blockade Battlefront and its sequel are almost shorn of drama. This is a show, even at its darkest, which plays straight for the punchline. The jokes all land, which is a good thing, but at no point did I feel as if any of the characters were in peril. 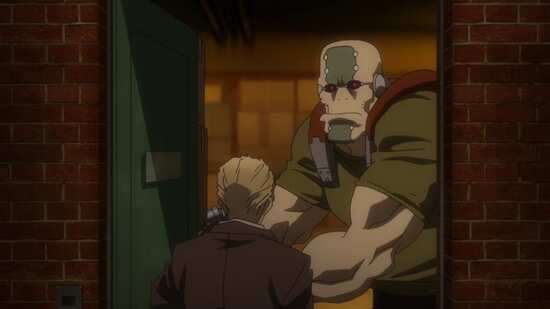 It’s also here that the richness of this world begins to tell. There really is a surfeit of characters here, so many in Libra itself that I forget most of their names, while characters outside the group flit in and out of the stories so ephemerally that it’s hardly worth keeping track. The show also has so many ideas and concepts that it doesn’t know what to do with itself. You expect a story to set up a consistent universe with a set of rules and boundaries, and play nicely within that space, occasionally testing the boundaries. You know what to expect with a Star Trek show, you know how vampires work in the Buffy universe, you know how time travel works in Doctor Who, but Blood Blockade Battlefront & Beyond never stops setting up. Even by the final episode in this collection, you’re learning something new about how this universe works. 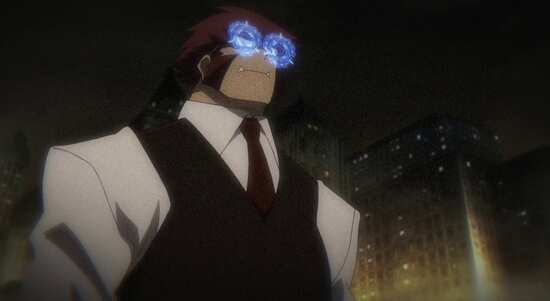 From disembodied heads held hostage in boxes to phantom hospitals and doctors who split into child clones of themselves, from werewolves reaching a quantum reality threshold to a butler trying to find his stolen brain, from an infestation of giant bugs (and a Ghostbusters reference) to a rich kid wanting an exclusive set of headphones, and from super smart microbes fighting in the macroscopic world, to a school parents’ day that gets out of hand, Blood Blockade Battlefront & Beyond offers a smorgasbord of delights, fun episodes that offer more variety than any anthology show. The only problem is that I could never really get a handle on what this world was meant to be. 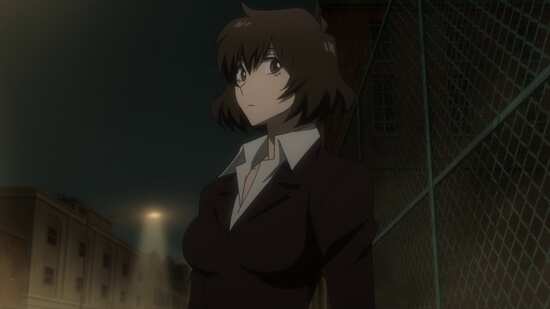 It is a small nit to pick, as the show doesn’t put a foot wrong in its run time. Every episode is a gem, every joke lands, and every action scene makes you marvel at the imagination and creativity of the artists behind the series. I had a great time watching Blood Blockade Battlefront & Beyond, and even if it didn’t quite excite me the way the first season did, it was never less than entertaining. But it’s not a show to binge watch, and it’s better watched at a pace where you can best appreciate the episodes, and it will also help if you’re bright-eyed, bushy-tailed, and able to devote you full attention to the screen. It’s definitely not a late-night chill-out show.