It’s really odd how a genre can grow on you. When I first encountered the idol anime genre, I wasn’t enthused, especially with another anime based on videogames. The irony is that I can now while away a few minutes or more bashing away at my iPad playing Bang Dream. But those early idol shows like Super Sonico did little to enthuse me, with shows like Show By Rock, or Samurai Jam merely making matters worse. When MVM sent me Love Live to review, I didn’t expect much, but found enough to appreciate in the subtitle only Collector’s Edition release to make watching the sub and dub re-release a few months later a priority. When All the Anime started (and paused halfway through) releasing the spin-off, Love Live Sunshine, I was hooked enough to submit to my impatience and import the second half when All the Anime stalled. Yes, I went back bought the original Love Live, this time on Collector’s Edition Blu-ray. I’m hooked on idol anime! 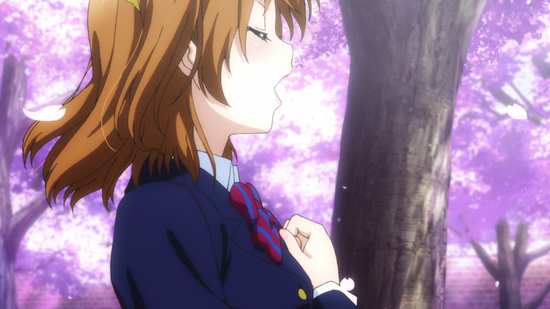 Honoka Kosaka is facing the end of her dream high school life. She’s just started the second year of high school at Otonokizaka High School, only to learn that it will be closing down, due to a lack of new students applying. After a momentary depression, Honoka decides that the only thing to do is to attract more students. The big thing in high schools right now are the School Idols, pop stars representing the best and brightest schools, although Otonokizaka is one school that has avoided the phenomenon thus far. Seeing the awe that students from other schools have for their idols, Honoka decides to start her own School Idol Club at Otonokizaka, along with her best friends Umi and Kotori. It may be an impossible challenge. The Student Council President is just as determined to keep the school open, but starting a new club at this point seems foolhardy and worse, potentially presenting false hope to the students. She isn’t likely to approve a School Idol Club. And even if they can get a club off the ground, they’ll have to put in a lot of hard work... and they need talent. 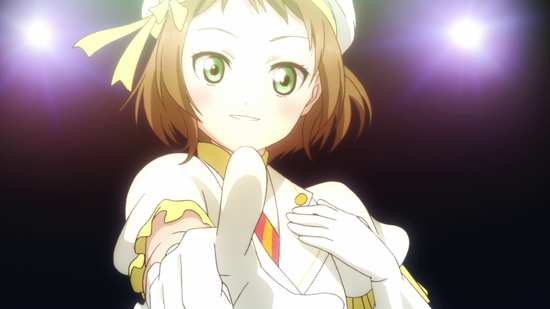 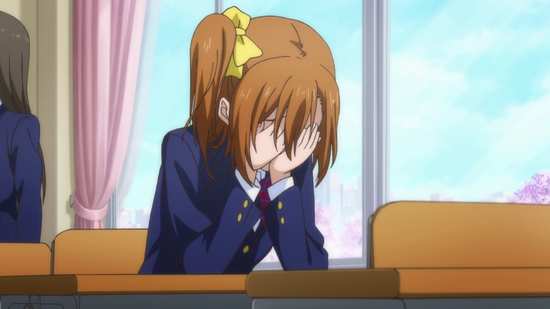 Love Live gets a 1.78:1 widescreen 1080p transfer on these discs, and it’s a good one. MVM have inherited the NISA authored discs, as they went on their road to regionalisation via Madman in Australia, and the level of detail, the clarity, the rich colours, all make the best of the HD format. You don’t have to worry about compression, banding and the like, and this Blu-ray is a strong improvement over even the second DVD release of the show. 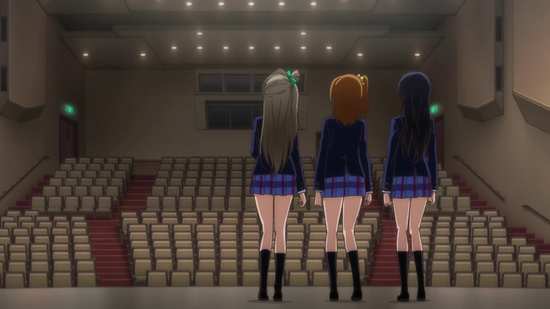 The image is clear and sharp throughout, with a bright and vivid aesthetic to the character and world designs. In terms of design style, it’s pretty standard anime fare, but the quality of the animation is detailed and expressive, and the characters are all individual and memorable in their own right, perfect for the fan that will latch onto their favourites, and buy all the tie-in merchandise. This is one show that will switch from 2D traditional to 3D CGI cel-shaded for the music videos, the same way that Super Sonico handled its music video sequences, to better animate the complex choreography of the dance moves, although in terms of maintaining character consistency when it comes to facial features, Super Sonico does it a little better. 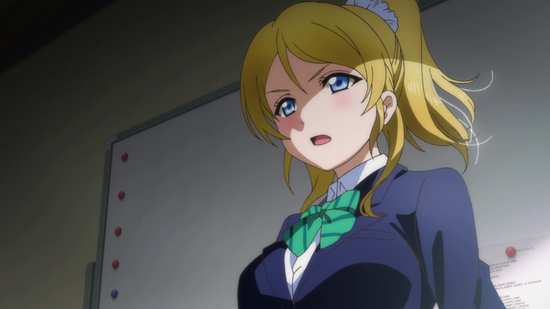 This time, you have the choice between PCM 2.0 English and Japanese, with optional translated subtitles, and a signs only track. I was happy with the Japanese dub this time, with the actors suited to their characters, the stereo doing justice to the show’s action, and more importantly the music. The subtitles are in a white font, and are logically formatted as per the DVD re-release. They are accurately timed and free of typos. 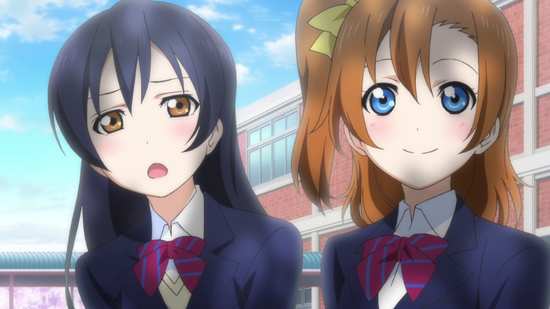 You get 2 Blu-ray discs in a DVD Amaray case with some nice artwork inside and out. This slips inside a double layered, thin card slipcase, which has room for the 32 page μ’s Music Scrapbook [1st Season]. This has character profiles, cast interviews, and episode guides, and plenty of artwork. 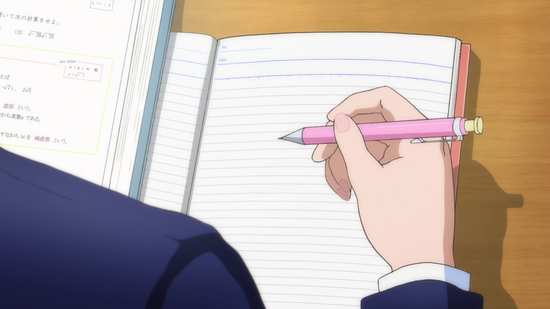 All of the extras are on disc 2, and amount to the textless opening and three textless closings. You get two of the original TV spots running to 32 seconds, and 5:22 worth of original trailers for the show. 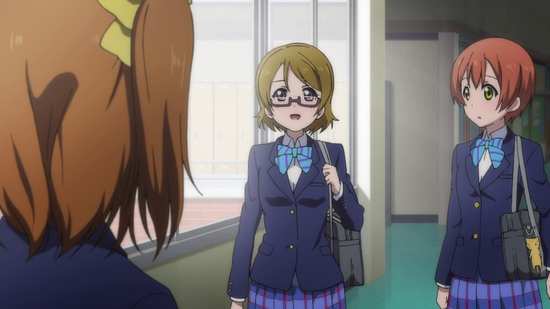 I’ve seen this before. A school threatened with closure, and an after school club coming to its rescue by excelling in their particular discipline. And quite honestly I prefer the version that’s set on a giant aircraft carrier and with all the tanks. Facetiousness aside, Love Live! is very enjoyable, a likeable light comedy with a fair bit of catchy pop music to it, and a cast of individual and again, very pleasant characters. It is one of those shows that are engineered and micro-metered to play to its target demographic. Each of its nine main characters is all unique, well-designed, and individual enough for obsessive fans to choose their favourites, developing faux relationships with their idol of choice. In that respect it’s no different from any real-world idol group in Japan. 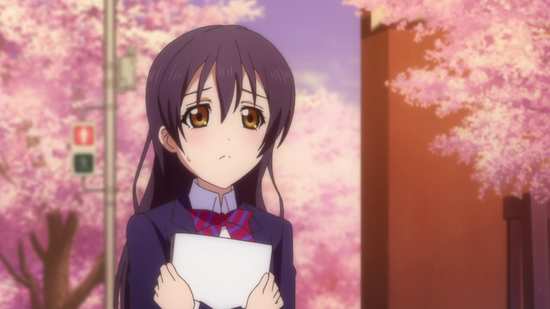 The only real nitpick that I have with the show is its similarity to K-On! It’s not the story, as Love Live! actually has a story, whereas K-On! is more slice of life. It’s the character of Umi, Honoka’s friend, who feels like a direct lift of Mio from K-On! She’s tall, with straight black hair, has the most mature voice of the nine, and is consequently the emotionally mature one in the group, and she gets stage fright and is easily spooked despite her mature outlook. It’s a wonder she’s not left handed and plays bass guitar! 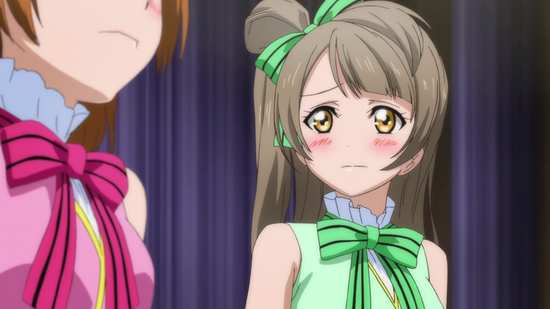 The difference from Girls Und Panzer here is that it isn’t the student council initiating things and Honoka reluctant, it’s the other way around. When the news gets out that the school is in danger of closing due to a lack of new applications, Honoka looks around for ideas for what will put their school back on the map (this is one of those unreal high school anime where students all love their high school lives), and comes up with the latest universal craze, that of school idols, which combines the Japanese love of pop idols with the ubiquity of girls’ high schools. The popular schools all have their select high school girl groups, and if Honoka starts her own group at Otonokizaka, fans will want to come to their school, and it won’t have to close. But while Honoka is eager, and gets her best friends Umi and Kotori to help her, the student council president is reluctant, hoping to find another, better way of keeping the school open. So Honoka has to overcome that challenge, as well as eventually get good enough to enter the Love Live! school idol tournament in order to succeed. It has to be accomplished in stages, prove that they are good enough to deserve a chance, prove that they have the talent, the skill and the hard work, start an official school idol club, seemingly impossible when there is already an Idol Study club and eventually convince the student council president that they are worth taking a chance on. 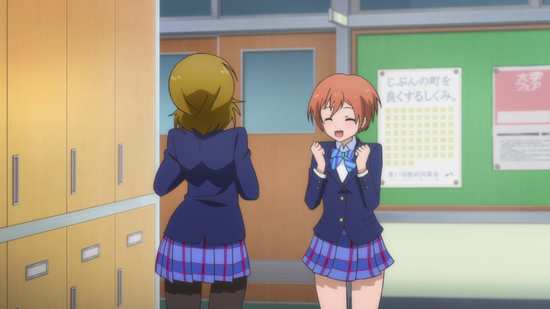 The way the show is structured makes it very easy to get into. Nine central characters would be an overload at first, but the group actually grows over the episodes, despite introducing all nine characters early on. Honoka is the eager young force of nature that comes up with the idea, and Umi is the mature-level headed friend and Kotori the likeable, easy-going friend that she ropes into starting the idol group. When it becomes clear that they need actual songs to sing, they find a first year girl named Maki who’s actually a musician, although she’s the reluctant stand-offish one. With her come two more first years, the shy wannabe idol Kayo, and her outspoken friend Rin. Then there’s the pushy ‘failed’ idol Nico, who previously started a group, but because of her obsessive nature, wound up alone in the Idol Study club. But her obsessive desire to be an Idol is just what Honoka’s group needs. With this seven in place it isn’t long before Honoka convinces the student council president that they are worth a shot, and the perfectionist Elichika even joins. With her comes vice-president Nozomi, the wise (and slightly sly) one of the group, who has been clandestinely helping the idol group all along. 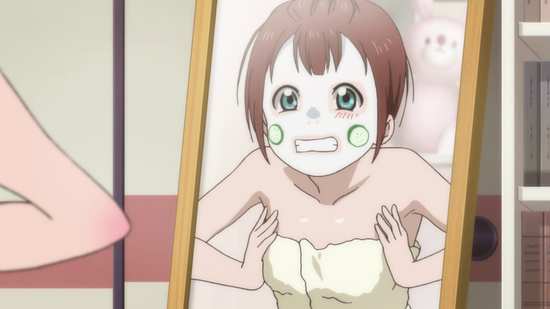 That I could name all of the characters, and point out their personality quirks, without once referring to the notes that I took while watching the show, indicates just how well Love Live! succeeds in developing its cast, and making each of them memorable, distinctive, and to some degree likeable. Although I have to admit that if I never hear “Nico-nico-ni!” again, it will be too soon. 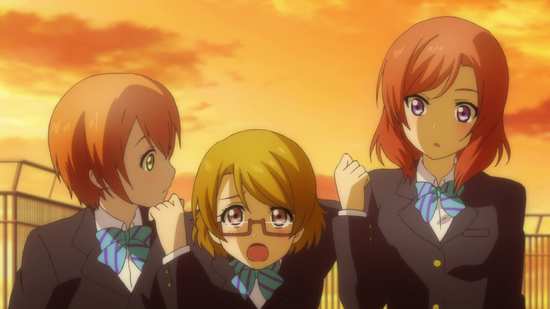 But Love Live! is a wholly entertaining character comedy, which works on the way the girls interact and bounce off each other. It is your typical anime in that there’s plenty of cutesy fan service, a swimsuit episode, and even some blatant booby grabbing. It knows exactly which target demographic it’s aiming at. But it is genuinely funny, wholly light, and enjoyably frivolous, except for the last few episodes, where a little bit of drama occurs, the series of reversals that ever so briefly threatens this growing and blossoming nine-way friendship, before good vibes overcome all. It has its weak points though and it’s not a show that you want to think too much about. I did, and got distracted by the question of where they get all their professionally produced music from; I doubt somehow that Maki does it all. But Love Live! will entertain for 13 episodes, and it’s good enough to warrant a second season, as well as a feature film spin-off. 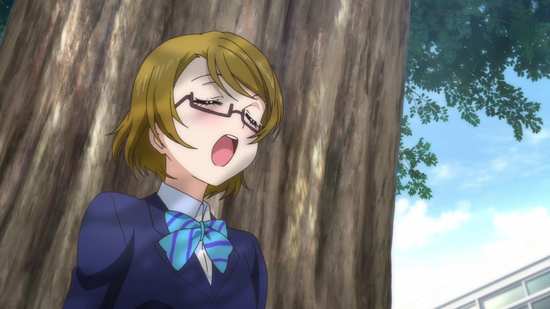 You get the best of both DVD releases of Love Live with this Blu-ray Collector’s Edition. The discs have none of the problems of the first DVD release, and you do get the dub from the second DVD release, but you do also get the physical accoutrements of the Collector’s Edition, the packaging and booklet. Of course it all looks and sounds much, much better in Blu-ray high definition. This is very much the Love Live to own.