Review for Kill Me Baby: Collection

Sometimes it’s easy to justify a double dip to Blu-ray, improved image quality, improved audio quality, the whole high definition package. But when it’s a comparatively older anime, one animated at NTSC resolutions, you start clutching at straws, hoping that the lossless audio and progressive playback will compensate for what in all likelihood will be a smeary QTec upscale. But that period of low resolution anime was a comparatively short one, from around 2000-2006. Every TV anime since then has been animated at some variant of high definition. Kill Me Baby is one such show, yet here I am again, trying to justify upgrading to the Blu-ray. You see, Kill Me Baby is a comedy, a sketch-show style anime with simplistic character designs and a basic world design, a look that doesn’t exactly challenge the SD resolution, let alone HD (the DVDs were in NTSC format, so there isn’t even any PAL speed-up to correct), while the audio... well the opening theme is quite skippable. Yet here I am, getting my first re-watch of the show with the Blu-rays. Is the double dip worth it? 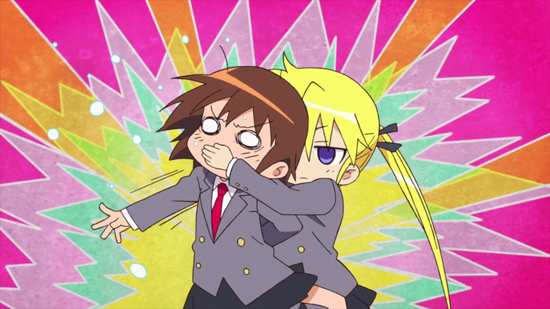 Yasuna Oribe is a high school student, probably. She’s friendly, outgoing and enthusiastic, particularly for her classmate Sonia. They’d be the best of friends, only Sonia is an assassin, and tends to react to Yasuna’s enthusiasm with almost lethal violence. A pat on the shoulder results in a broken hand, anything more effusive gets Yasuna caught in a headlock. But Sonia’s lightning quick reflexes don’t keep Yasuna down for long. Also attending their school is Agiri Goshiki, an unlikely ninja, while from outside the school an Unused Character plots against Sonia. 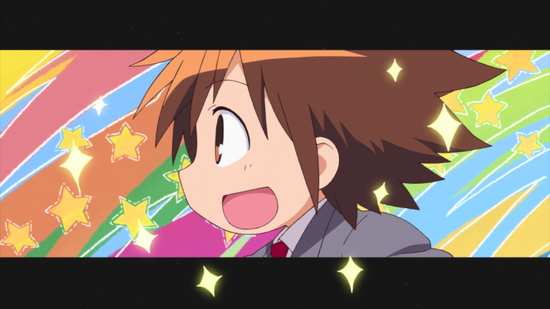 13 Episodes of Kill Me Baby are presented across 2 Blu-rays from MVM. 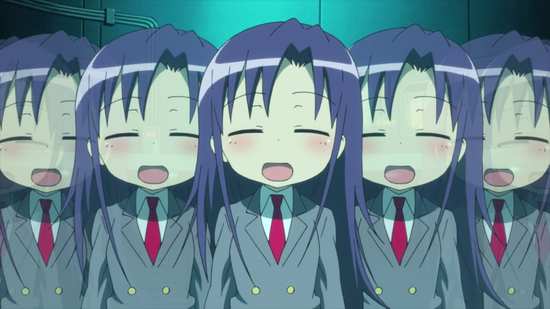 Kill Me Baby gets a 1.78:1 widescreen 1080p transfer. The image is clear and sharp throughout, with no signs of compression, artefacting or even banding. That’s probably because Kill Me Baby is a very simple animation, with basic character designs that seem a cross between South Park and Hetalia. The world design too is simple, with just enough in the way of detail to tell the jokes and get some kind of individuality of design across. The DVDs were NTSC and progressively encoded, so even the animation on the Blu-rays is on a par with the DVD, as well as the quality of the transfer. You’ll really only see minor increments on the Blu-ray. You’ll hardly notice the better compression, you might appreciate the more fluid and crisp line-art, and the biggest improvement will be in the quality of the colour. But all of this will be forgotten within a couple of minutes. There’s nothing in the visuals that begs for a double-dip. 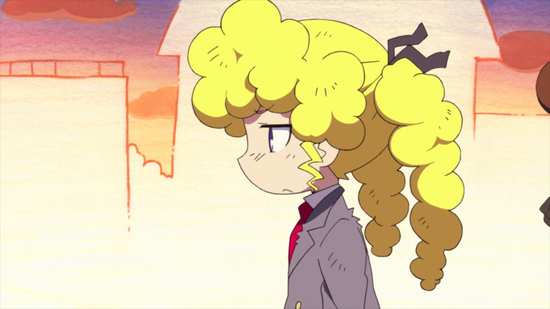 You have the choice between DTS-HD MA 2.0 English and Japanese stereo with optional translated subtitles and a signs only track. I gave the English dub 5 minutes and had to quit after just two. It’s so bad that you need the subtitles on as some of the voices are incomprehensible. The original Japanese audio is the way to go here, especially as Yasuna’s voice actress creates an adorable character, getting the balance between manic and meek just right. Hearing a contrite Yasuna after she’s been chastised by Sonia makes the hyperactive Yasuna even funnier. The opening theme just doesn’t end, but it’s balanced by a really nice electronica ending, while the incidental themes suit the comedy well. The subtitles are timed accurately and free of typographical error. 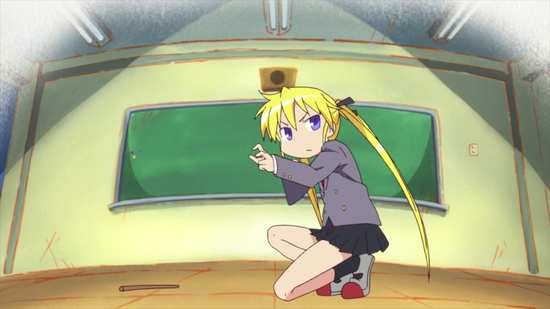 You get two discs in a BD Amaray case, one on each inner face. The discs present their content with static menus and jacket pictures. Each episode is followed by a translated English credit reel. 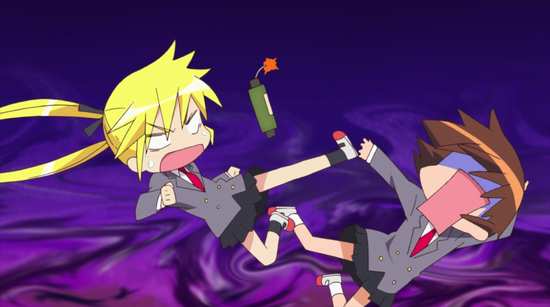 Comedy tends to get brushed by when it comes to critical and audience acclaim. It seems that things that make us laugh, never feel as important as things that thrill us, or scare us, or move our more tender emotions. You don’t see too many comedies win Oscars. I’m guilty of the same thing too, forgetting the shows and films that moved me to laugh, in favour of other genres when it comes to picking my favourites. I think there is a perception that there is something cheap and facile in invoking laughter, rather than evoking other emotions. Pure nonsense of course, as laughter may be one of the most social, and healthy activities that a person can partake of. If there is a best comedy anime award somewhere, Kill Me Baby will be a likely contender, as it’s the funniest anime I have seen in quite a while. I was actually laughing out loud, repeatedly during episodes, not the odd smirk, or knowing chuckle that I usually save for anime humour. These were actually belly laughs! 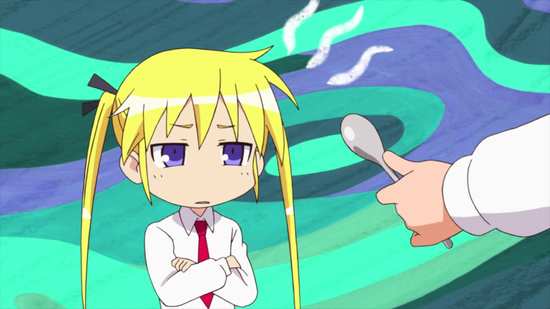 Not that Kill Me Baby is perfect, far from it. It’s based on a short form manga, a lot like the Peanuts comic strips in that you’d get just a few panels to set-up and deliver a punchline. The typical episode of Kill Me Baby has three or five arcs to it, each one of them focussing on a particular subject, and delivering gag after gag. It can be hit or miss, with some jokes falling flat, while others hit like a humorous hurricane. I’d say the hit rate is around 30-70 for me. It’s just that the jokes are so densely packed, that even the 30 have me laughing all the way through an episode. It’s rare that I actually stop. 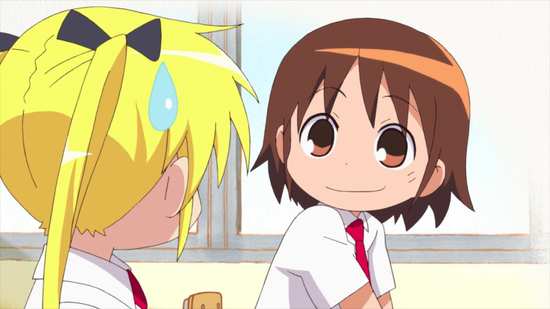 Of course humour is in the eye of the beholder, and what works for some won’t work for all. Kill Me Baby is essentially a Manzai routine, the Japanese extrapolation of the classic comedy double act, with an enthusiastic idiot partnered with a straight man, who responds to the idiot’s lunacy with varying degrees of violence. Yasuna Oribe is the enthusiastic idiot, (probably) a high school girl with a joie de vivre that can quickly grate. She says she’s probably a high school girl, as her interests and passions tend to the more juvenile, and elementary school level. The straight man in this show is Sonia, the assassin who sits next to her in class. Yasuna wants to be Sonia’s friend, Sonia finds Yasuna annoying, but the violence is pre-built into the premise when Sonia’s instincts kick in merely at Yasuna’s greeting. A tap on the shoulder results in a broken hand, and an attempt at a hug winds up with Yasuna in a headlock. Fortunately she’s a quick healer. 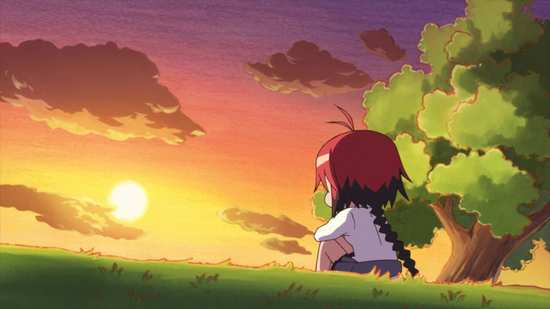 So the average set-up to a gag is that Yasuna will unveil to Sonia her latest interest or passion, or topic of conversation. Despite her disdain, Sonia will be drawn in, and even show some interest, only for Yasuna to top it off with a moment of idiocy, at which point violence will ensue as Sonia’s frustrations overwhelm. Doesn’t sound too funny when I type it out, but it’s in the execution that Kill Me Baby works, the nature of the gags, and the timing. Just to add to the mix, there’s also the character of Agiri Goshiki, a self-styled ninja, but whose abilities tend more to sleight of hand and illusion. She’s a light, airy girl whose professionalism appeals to Sonia, but whose ditziness resonates with Yasuna, so on occasion the duo becomes a trio for even more humorous possibilities. 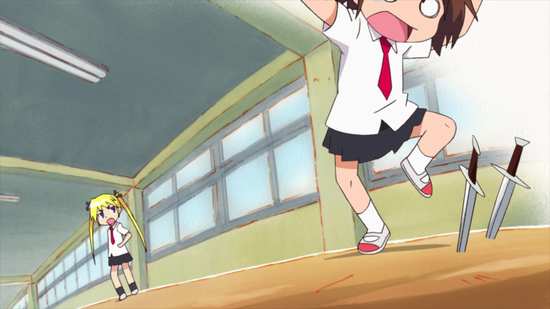 The temptation in a review like this is to list all the funny bits in the show, but they’re never as funny written down, will effectively spoil the show, make the review longer, and wind up with me spending five hours more writing this thing, as I recall a funny moment, and sit here for a minute, chuckling to myself before getting around to typing it out. So you’ll just have to take my word that Kill Me Baby is one of the funniest anime comedies I have seen. I did think at first that the short gag format wouldn’t hold over 25 minute episodes, that the show would work better in a 10 minute format or even shorter, but the laughs do sustain. And there is something of a storyline and character development, even in this gag based show, with Yasuna slowly becoming determined to reform her assassin friend, and Sonia slowly developing a tolerance, if not more for her desk neighbour. There are moments in the final two episodes that are even quite touching, although the lasting image I have is of Sonia desperately trying to blow out the sticks of dynamite that Agiri has used instead of candles on her birthday cake. 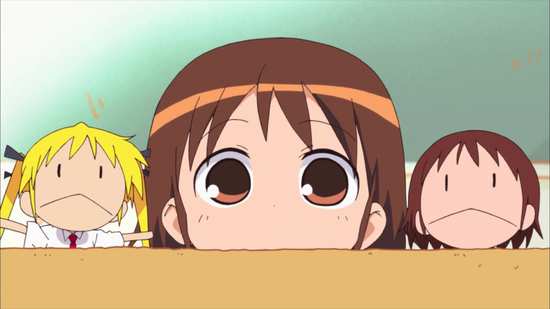 Kill Me Baby is my kind of silly. It’s fast paced, funny, and with a trio of charming characters. It gets the straight-man/idiot routine down perfectly in terms of timing and impact, and I love comedies that actually make me laugh instead of just smirk or chuckle. However, I just can’t justify the double dip if you already own the show on DVD. Other than correcting a subtitle error in episode 12, there’s just not enough of a difference between the two to warrant spending twice. Of course if you share that particular OCD of mine, where you have to have all your favourite shows in as good a quality as possible, you’ll probably ignore that advice. But Kill Me Baby is just as funny either way.