One of the things that I like to do is to watch seasonally appropriate content. You might think that is easy given that TV companies tend to broadcast such fare in a timely manner, but I always have a pile of review discs begging my attention, and I have to squeeze in the odd horror movie at Halloween, try and get a viewing of Strange Days every New Years. Anyway, it’s Christmas, and I am long past the age where schmaltz and faux-goodwill appeal to me. Give me action, and give me irony. Eschewing the Die Hards and the Lethal Weapons, this year I opted for comedy, and what better Christmas movie to summarise the human condition than Trading Places? Except Trading Places isn’t easy to find on UK Blu-ray. It has a DVD release of course, and it got an HD-DVD release at the time of the format wars, but Blu-ray is limited to an HMV exclusive as far as I know. I took the convenient route, and imported the 35th Anniversary release from the US. 35 years! Just contemplating that threatens to send me into a spiralling depression, so let’s carry on, eh? 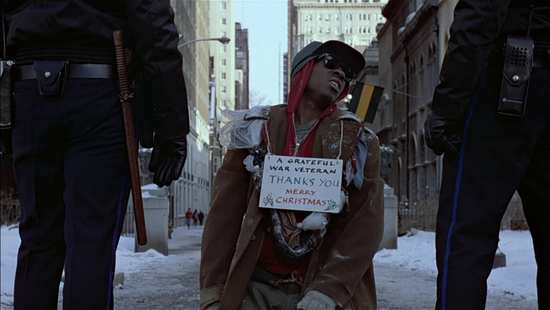 The Duke Brothers, Randolph and Mortimer own the oldest and most prestigious commodities brokers in Philadelphia. They are also unprincipled, greedy and manipulative, so when Randolph finds an article in a scientific journal about genetics, he espouses his own theory about environment over breeding. Mortimer disagrees, saying that breeding will always tell, and naturally the two wily old men make a friendly wager over the matter, a wager that will turn the lives of two people upside down. Billy Ray Valentine, a hard-up con artist from the streets is unaware that he will soon be an influential Wall Street investor, waited upon hand and foot, and accepting only the finest things in life. But to make room for Billy Ray’s climb to the top, someone’s life will have to be ruined, and soon Louis Winthorpe III, who runs the Dukes’ company, will find himself framed for theft, jailed for dealing drugs, turned out of his house, shunned by his friends and despised by his fiancé. Penniless and on the streets, he finds unlikely assistance from streetwise prostitute Ophelia, and begins plotting to get his life back. 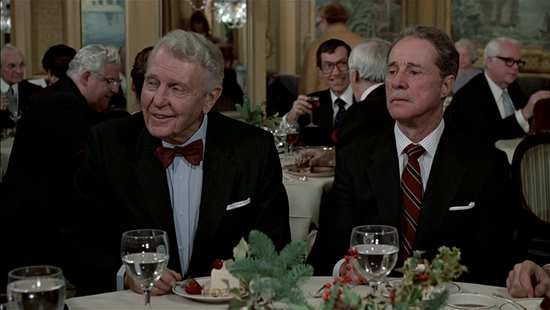 Trading Places gets a 1.78:1 widescreen 1080p transfer with a somewhat disappointing Dolby Digital 5.1 Surround English track, Dolby Digital 2.0 Mono French and Spanish and subtitles in these languages. This may be the 35th Anniversary release, but Paramount have been wheeling out this same disc in different packaging for the last 10 years or so. The transfer is taken from an old print, probably the same one used for the DVD, and with a bit of DNR applied, grain reduced, and the odd fleck of dirt on the print, it’s definitely not the 4k restoration that this film deserved. But the print is stable, there’s no significant damage, and the detail level in the brighter scenes is excellent. Dark detail is a little lacking though, and there is the occasional soft scene. The audio is fine, if not the lossless track the film deserves, but the dialogue is clear, the film’s music comes across with enough impact, and despite the surround format, this is really a front focussed presentation. 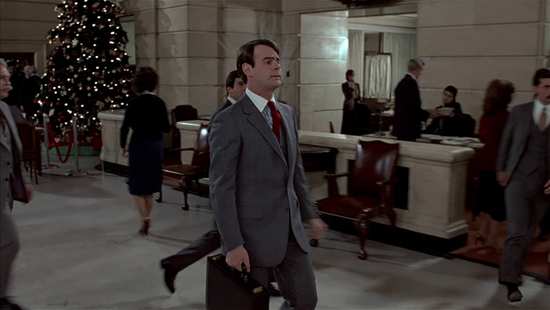 What I haven’t seen before are extras for Trading Places, although they appear to come from a 2008 DVD release.

You get one disc in a thin BD Amaray eco-case, wrapped in an o-card slipcover that repeats the sleeve art and blurb. Inside, and for what it’s worth, you’ll find a code for the UV version of the film. The disc boots to an animated menu.

Insider Trading: The Making of Trading Places lasts 18:28 SD. It’s a 2008 featurette which features interviews with the cast and crew. Compared to the usual EPK offering, it’s a nice, honest retrospective of a film that no one has to sell. 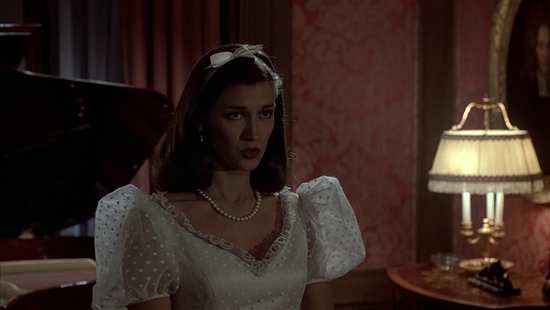 Trading Stories lasts 7:59, and offers interviews with the cast and director from 1983.

There is a Deleted Scene which lasts 3:09. If you select the commentary, you get a 1:46 featurette with the executive producer George Foley Jr talking about the scene.

Dressing the Part is a 6:31 interview with the costume designer. 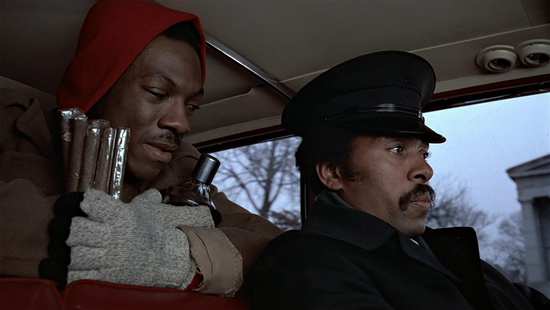 The Trade in Trading Places lasts 5:25, and explains the end of the film if you need it. Apparently John Landis needed it.

You can have a Trivia Pop-up track to read while watching the film.

The Industry Promotional Piece lasts 4:18, and is a little bit that Dan Aykroyd and Eddie Murphy put together with John Landis for an expo when there was no trailer for the movie. 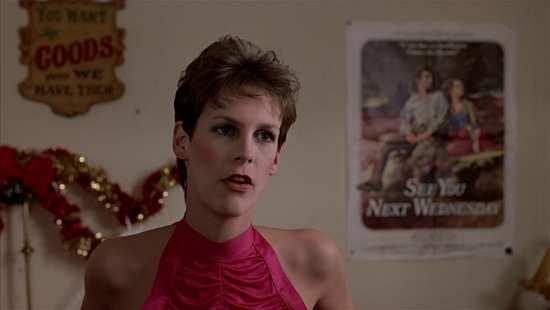 Trading Places still has to be one of my favourite comedies. It’s witty, hilarious and side splittingly funny from beginning to end, and that’s without having to resort to the gross toilet humour that seems to be obligatory in any more recent comedy. It’s a classic culture clash tale, with the downtrodden hustler taking the place of the aloof and effete snob, and both of them learning something that ends up making them better people. The script is excellent with every line a gem. The machinations and sheer chicanery of the Dukes is a wonder to behold; yet it makes the eventual denouement all the sweeter. It’s also wonderfully timeless, as long as greed and poverty remain part of society, then this film will find an audience. Despite the incongruousness of the story, it doesn’t seem at all contrived which has much to do with the perfect casting as anything else. 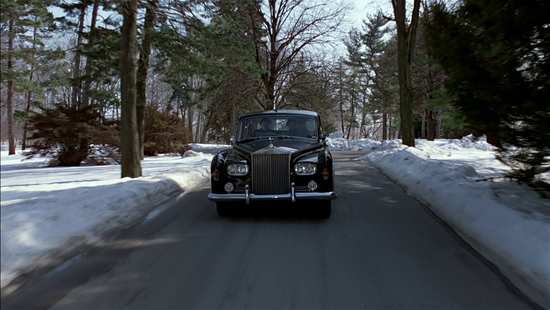 Ralph Bellamy and Don Ameche, who both sparkle in the roles, play the two Duke brothers. Bellamy makes Randolph appear like the kindly grandfather type, whereas Ameche as Mortimer is a little wizened and bitter, but when the two hatch their schemes, they have a glint in their eyes and a playful malice that lights up the screen. Eddie Murphy shows some of that customary charm as Billy Ray Valentine, wisecracking and genially foulmouthed in that way that made him such a star the first time round. Dan Aykroyd is perfectly cast as Louis Winthorpe III, a pompous upper class snob that would be easy to despise, yet Aykroyd gives him a vulnerability that makes him easy to relate to, even likeable. Jamie Lee Curtis is more than memorable as Ophelia, playing the hooker with a heart of gold, long before Julia Roberts made it such a cliché. But Denholm Elliott as the butler Coleman steals the film. He is torn between loyalty to his employers the Dukes, and his own sense of right and wrong. It’s a small role, but he gives the character a humanity and openness that makes him one of the best characters in the film. 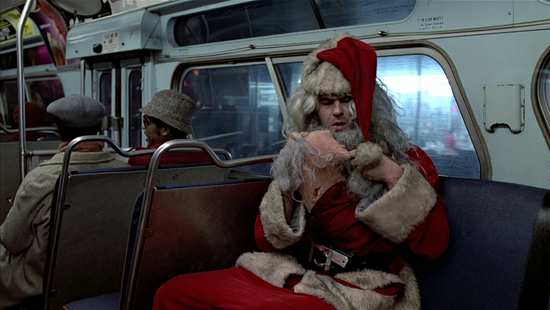 Trading Places is a gem that hasn’t lost its sparkle. It’s an increasingly rare animal in modern cinema, an intelligent comedy that appeals to a broad audience. It’s got brilliant performances from all involved, including Eddie Murphy when his wit was sharpest. The story’s timeless, the script is flawless, and John Landis directs with verve. And once more we get a Blu-ray release which is well worth getting to upgrade from the DVD, but is nowhere near as good as it should be. Given the regularity with which Paramount re-release this disc in the US, it’s clear that they haven’t given up on cashing in on it. It’s a shame, as this is a film which could use a specialist label like Eureka or Arrow to give it the presentation that it deserves.