Right now, if you wander into Poundland, you can pick up Robocop on Blu-ray for £2. That’s the poorly received 2014 remake. Yet the original Robocop from 1987 is still deserving of full price releases.

That’s what we have here, as the film now falls to Arrow Video to give their patented boutique treatment to. When I finally joined the HD generation and started on my mission of double-dipping my DVD collection, I eschewed the original barebones Robocop Blu-ray, and was rewarded five years ago when Fox/MGM released a new version sourced from a 4k scan. I have to say I was in Robocop heaven, with a film that looked spectacular in high definition, rendering this back catalogue title in modern HD precision. They also gave it a suite of extra features that put a grin on my face. I thought it was the definitive release. Then Arrow Video proverbially said “Hold my pint!” This is a two disc release, and for the first time, we get the original Theatrical Version of Robocop in High Definition. The last time that got a home video release was on DVD, on that notoriously fickle branched release that sent many a DVD player clunking and grinding as it tried to figure out if it was playing the Theatrical or Director’s Cut version. 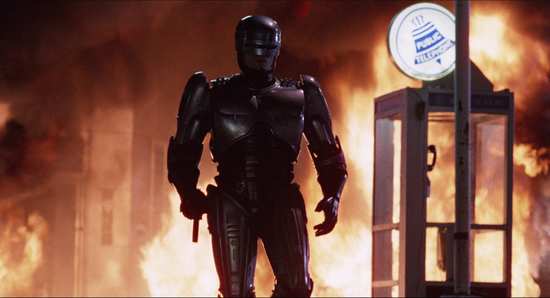 When Officer Alex Murphy was killed in the line of duty, it should have been the untimely end of a short but promising career. But this is the brave new corporate world of the future, where Omni Consumer Products own the Detroit Police, and they take their ownership literally. OCP is investing in revitalising Detroit, tearing it down and creating the city of the future, Delta City. The big problem is crime, and human police just don’t cut it. OCP are looking to mechanise urban pacification, but when Dick Jones’ pet project ED-209 suffers an embarrassing setback, fresh young Turk Bob Morton steps forward with his Robocop project for which Alex Murphy has just ‘volunteered’. The new cyborg policeman makes an instant impact on Detroit, but OCP couldn’t remove the human from the equation completely. A nightmare vision sends Robocop on a journey to rediscover his past, and he winds up investigating his own murder. Meanwhile, Dick Jones isn’t happy about having his thunder stolen...

For this release, I watched the Director’s Cut version on disc 1 in its entirety, just sampling the other versions. 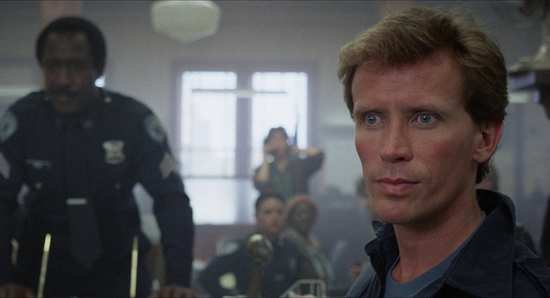 This release shares a source with that 2014 release, that wonderful 4k re-master which was the source of a gorgeous looking Robocop transfer. I don’t know if I just watched the film in the right frame of mind, or whether there’s an objective difference, but I think that the Arrow Video transfer of the film actually looks a smidge better. The 1.85:1 widescreen 1080p image is excellent, detail levels are spot on, the colours are rich, and the contrast levels are perfect. The grain is unnoticeable put present. I just had a very filmic experience watching Robocop this time, and the sense I get is that this transfer was organic in a way that the 2014 release wasn’t, but that’s wholly a subjective thing. I can say that the same weaknesses are apparent, which mostly boil down to the Director’s Cut footage, particularly Boddicker’s demise. You also have the full gamut of audio options, offering you the original theatrical experience, as well as the DTS-HD MA 5.1 Surround English track that I watched. The audio is fine, the action comes across well, as does Basil Poledouris’ score, while the dialogue remains clear throughout. You also have the choice between DTS-HD MA 4.0 Surround and DTS-HD MA 2.0 Stereo English, with optional English subtitles on both the Director’s Cut and the Theatrical Version. 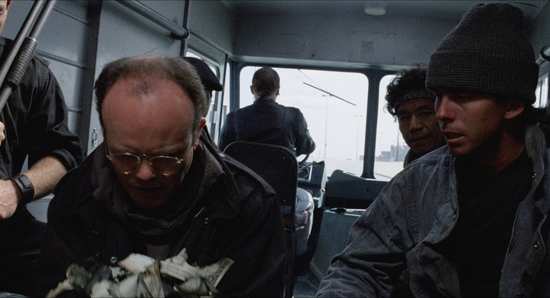 When I watched a bit of the Theatrical Version, I did feel as if the audio sync on the 5.1 track was not quite tight enough when watched through my home cinema, so you might have to tweak the delay. I didn’t have that problem with the Director’s Cut version, and neither did I have it with the Theatrical on a standalone player. 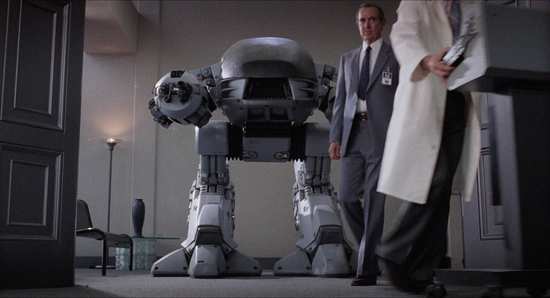 I haven’t seen the packaging for this release, although I have seen people on forums torn between buying the steelbook or the collector’s edition packaging, the latter of which has an 88 page booklet. The steelbook only has a 40 page booklet, but it does have the classic artwork on the front. I just saw the check discs. Woe is me. 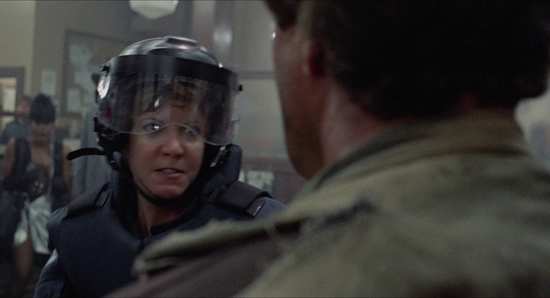 Both discs offer the original audio commentary with the film from Paul Verhoeven, Jon Davison and Ed Neumeier.

Disc 1 has two new commentaries with the Director’s Cut of the film, one with Paul M. Sammon, and one with Christopher Griffiths, Gary Smart, and Eastwood Allen. 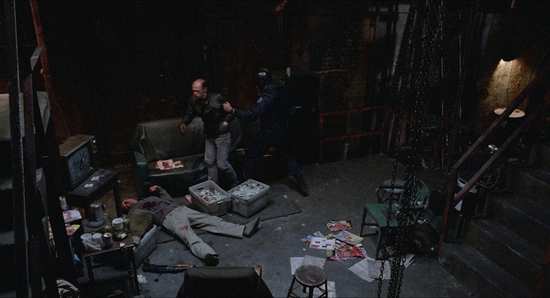 The Future of Law Enforcement: Creating Robocop, an interview with co-writer Michael Miner which lasts 16:51.

Robotalk is a Roundtable interview with Ed Neumeier, David Birke, and Nicholas McCarthy, which lasts 32:08. 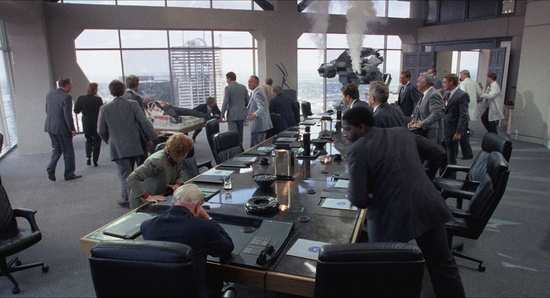 Also on the disc are the following.
Truth of Character with Nancy Allen (18:26).
Casting Old Detroit with Julie Selzer (8:20).
Connecting the Shots with Mark Goldblatt (11:06).
Analog with Peter Kuran & Kevin Kutchauer (13:36) is a featurette on the VFX.
More Man Than Machine: Composing Robocop (12:04).
Roboprops (12:50) a featurette on memorabilia. 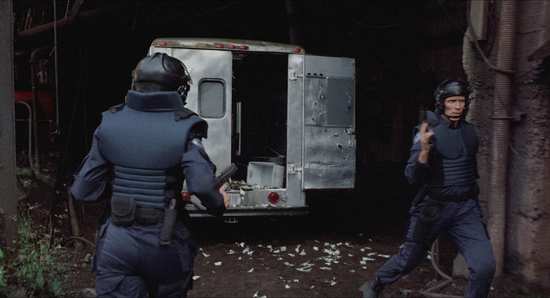 Then there are the archival featurettes from previous releases 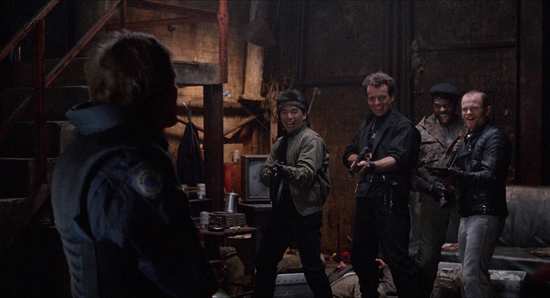 Finally on disc 1, there are two Trailers, three TV Spots, and Image Galleries covering Production Stills, Behind the Scenes, and Poster & Video Art.

All of the vintage featurettes that were SD on previous releases have been scaled up to 1080i 60Hz. 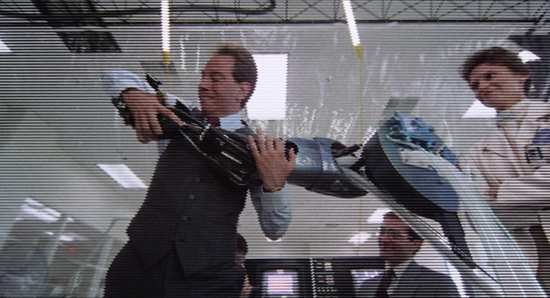 As well as the aforementioned commentary, there are two isolated scores presented in DTS-HD MA 2.0 Stereo, the Final Theatrical Mix of Basil Poledouris’ score and the Composer’s Original Score. 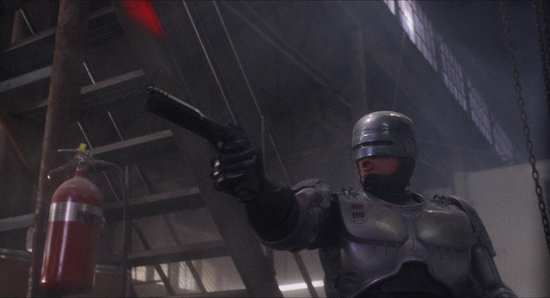 And what I was looking most forward to in the extras was The Edited-for-TV Version. I have a lot of nostalgia for that time in the eighties and nineties, when ITV in particular thought that they could show films like Beverly Hills Cop, Midnight Run, and indeed Robocop at teatime if they just edited out the sex, the violence, and the swears. I’ve always had this masochistic urge to watch films butchered in that way just for the comedy value. And Arrow’s release gives us that chance, with this version, presented in 1080i 60Hz, 4:3, with DTS-HD MA 2.0 English stereo and optional subtitles. 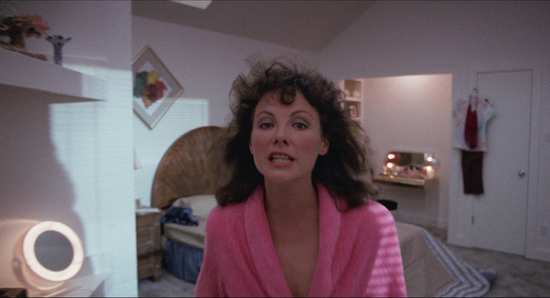 It lasts 95:16, and is unwatchable, for all the wrong reasons. Arrow had to release a version that worked universally, and that meant 1080i 60Hz. But it seems that they are working from a PAL source, quite probably the same version that ITV showed back in the day. 25 frames per second only go into 30 frames per second if they repeat every 5th frame. That’s what happens here, and the resulting playback is juddery to a degree that I find distracting. 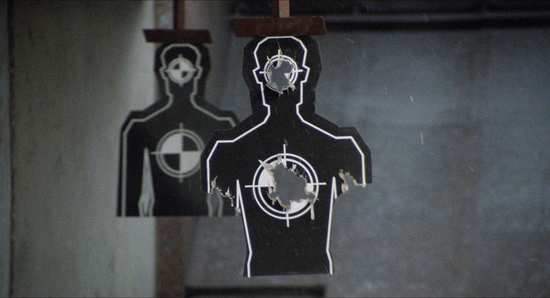 There’s a more convenient way to see some TV edits in Robocop: Edited for Television, which offers Alternate Scenes running to 18:25, and is presented in HD.

There is also the Split Screen Comparison with lets you compare the Theatrical to the Director’s Cut for 4:02, and the Theatrical with the TV Version for 20:16. 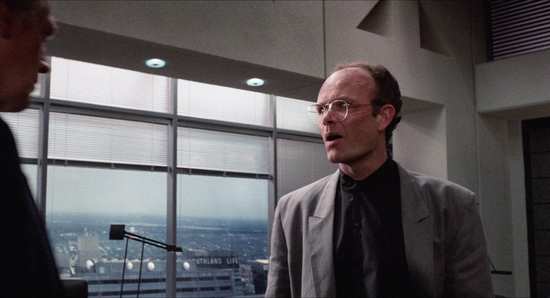 All that’s missing is the commercial for the videogame that was tagged onto the original VHS release. That and the Flesh and Steel Documentary, which might be one reason to hold onto that 2014 disc. 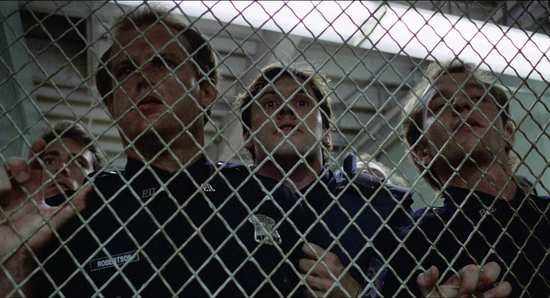 It’s been 30 years, and what at the time seemed like just another eighties action flick has gained classic status. This film is so much more than just the sum of its parts, which is somewhat surprising, given that it really is many films rolled into one. You have the straight up action movie, you have the stinging satire on capitalism, which I have to say is even more relevant today than it was back in the Reagan era, you have the detective story, a dead man investigating his own murder, you have the biblical allusions, the constant themes of resurrection that run through the film, it feels like an urban Western, and of course there’s the obvious Frankenstein allegory. 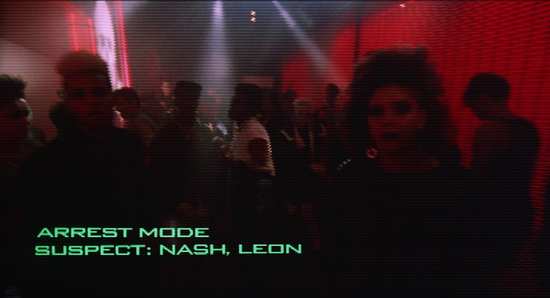 Robocop is jam-packed with ideas, plot lines, concepts and philosophies that could actually fill ten such films, yet in its brief 100 minute runtime, it manages to make it all work, and work brilliantly. There are no loose ends. It’s a case of lightning striking at just the right moment, making this bastard creation come to life. It’s notable that they tried to do the same thing with the sequel, cram as much in as possible, but when lightning struck that one, all that remained were the scattered, messy body parts of a bad film. 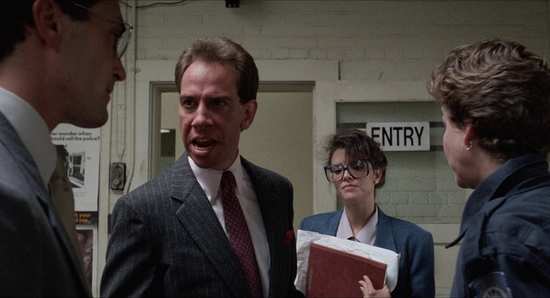 They just don’t make them like they used to, could be an appropriate cliché, but really it’s down to Paul Verhoeven’s outsider’s view of US eighties society that makes this film unique, as well as his joyous embrace of over the top violence, accentuated by this Director’s Cut. For a director who had never done science fiction before, he certainly nailed it on his first try, and then followed it up with the epic Total Recall. The irony is that both of these films have been remade in recent years, neutered of all social relevance, sanitised for the summer blockbuster season, and serving only to make people think fondly of the originals. 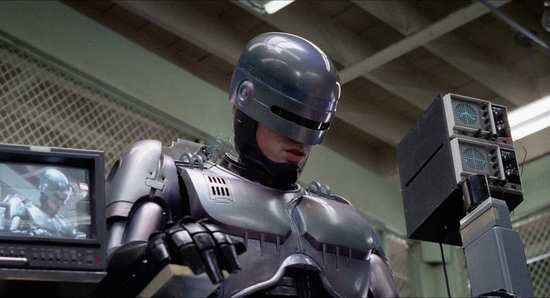 I still love this film even after all these years, having first watched it when I was a teenager. The characters, the writing, the story all appeals to my sci-fi geek side, but there’s much more to the film than just that. The older I get, the more I discover in it to appreciate. Whereas at first it was just the action, later on I cottoned onto the satire, and then it was the religious allegory. Robocop ages with its fans. It is one of those rare, timeless classics that will never go out of style, and while I briefly thought that the eighties Yuppie culture satire would date, the ‘greed is good’ mentality never actually goes away, while the eighties accoutrements of these capitalists serve as an interesting historical document. 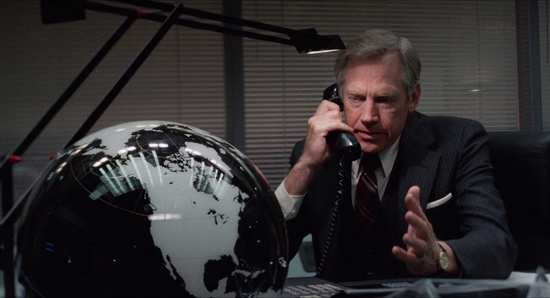 Every time I watch Robocop I find something else to appreciate. Yesterday I was wondering just how much of a debt this film owes to the Judge Dredd comics, especially when it comes to its sense of humour. I gave that 2014 release a 10/10, and I still think it’s worth that rating. So I’m left wondering how to rate this release even more 10/10. It’s a 10 to the Max release! I’ve run out of leeway on the reviewer scale. This Arrow release looks even better, and they’ve been lavish with the extra features. The only stain on this release is the quality of the Edited-for-TV version, and I’d have to be really petty to complain about that. The definitive Robocop is here... until it goes 4k.