It’s time to lower one’s expectations. Most anime released in the UK are recent titles, shows that have been broadcast within the last two or three years, or sooner, hastily licensed in the US and brought to fans while the hype is still fresh, and while the profits can be maximised with special editions and deluxe packaging. Once in a while there are shows that slip under the radar and are worthy of rediscovery. But usually when an older show, that isn’t an established classic getting an HD upgrade, shows up on the release schedule, it’s just one thing, a space filler, filling a slot on the schedule, and part of a bundle deal that ensures that some revenue flows back up the chain all the way to Japan. Asura Cryin’ was a 2009 show, it’s being released all in one shot, it’s subtitle only, and it’s in 1080i format. This doesn’t bode well. 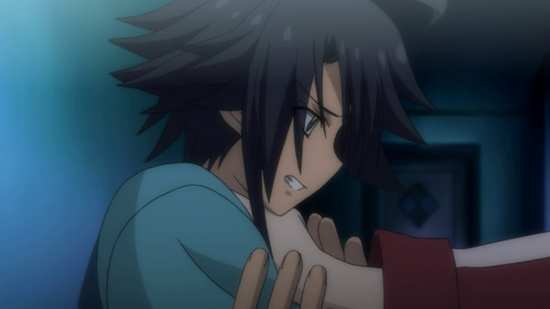 Tomoharu Natsume is a normal boy, except for the fact that wherever he goes, a ghostly girl named Misao that only he can see follows. He’s about to start high school, and has moved into a place close to the school after his mother threw him out. And as he’s moving his stuff in, a strange girl in glasses gives him a heavy metal briefcase, telling him his brother left it for him. And from that point on, things get really weird. It’s not just the shrine maiden attacking him at night. There are two student councils in his school, a Demon Society and Religious Zealot society, and they both want to get their hands on the briefcase, or rather what’s in it... a giant robot. And it turns out that Tomo isn’t the only one who can see Misao. 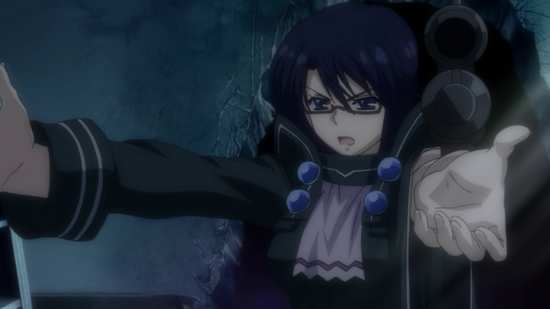 Disc 1
1. Asura Machina, The Evil Mechanical God
2. Future Destruction
3. A Shadow Upon the Light of Science
4. The Feeling of Losing Your Destination
5. Intersecting Hearts and People
6. The Sacrifice Beyond the Darkness
7. Dreams Scattered Across the Cruel Sky
8. The Princess of Calamity
9. A Forbidden Being That Should Not Exist 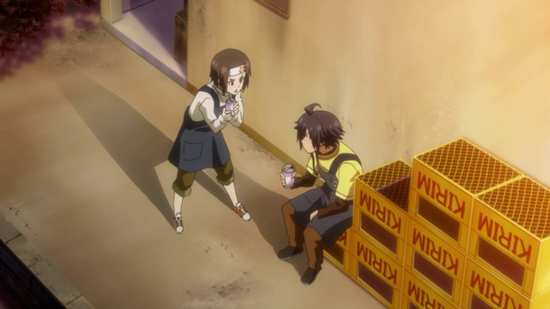 Disc 2
10. Connected by the Chains of Time
11. The Ordinary and Extraordinary With Us
12. Until the World Wilts and Dies
13. Mark of the Accursed Sinner
14. The Obliterated World and the Ruins of Memories
15. The Burial Doll Consumed By the Demon
16. Free But Inconvenient Choices
17. The Price of Calling the Name of the Living Sacrifice
18. The Lonely Relationship Between Love and Magic 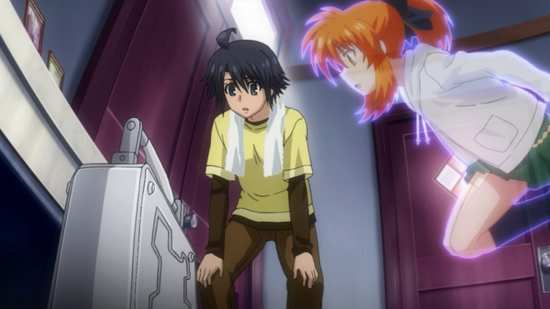 Disc 3
19. The Truth I Offer to You
20. Moment of Destruction, Darkness of Annihilation
21. A Future Without Memories
22. Death and Peace Adjoined
23. Surviving Life, Dying Life
24. My Feelings for You Destroy the World
25. Despair Felt For the Past, Parting, and Predestination
26. The Gears of Choice 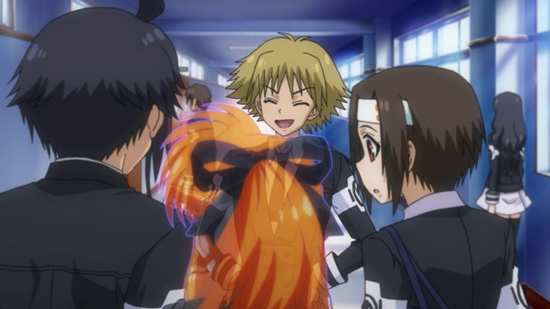 Asura Cryin’ gets a 1.78:1 widescreen 1080i transfer at 60Hz. It’s not pleasant. The interlaced transfer delivers just what you’d expect in terms of judder during pans and scrolls. There is the odd scene that looks up-scaled from SD, but generally the HD presentation is consistent. The show itself gets a rather unimpressive animation. As usual, the CG elements, the Asura Machina look and move adequately, but the character designs are simple and not always on model, and look ten years older than their 2009 vintage. 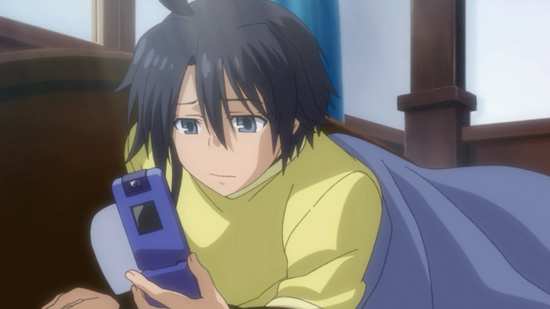 Asura Cryin’ gets a DTS-HD MA 2.0 Stereo Japanese track with English subtitles locked during playback. The audio is fine, the dialogue comes across well, with the characters voiced with strong performances. The subtitles are timed accurately, and while there is the odd typo, it’s a rare occurrence. What’s notable about this show for me are the theme songs, all songs from Angela, who I recall doing the striking theme tune to Shikabane Hime. The songs here are pretty catchy too. 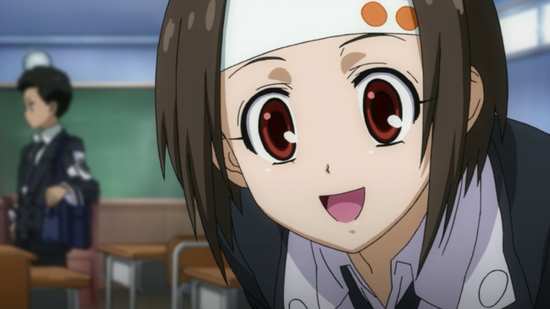 The discs present their content with static menus, and each episode is followed by a translated English credit reel. 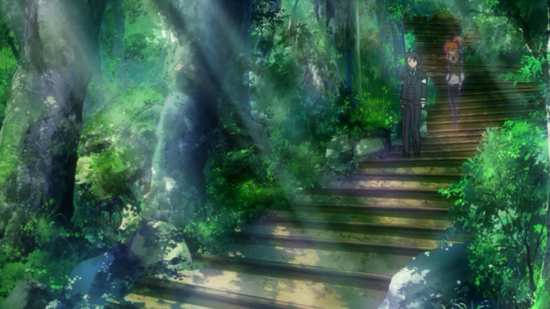 Asura Cryin’ has a really decent story. Unfortunately, it’s executed in this anime with cack-handed incoherence, long stretches of confusion alleviated by dull stretches of exposition dumping. The characters may be enthusiastically performed but they conform to the usual cookie cutter anime archetypes, and the 2D animation never really lives up to the scope of what the story wants to achieve. Having said all of that, there was something about Asura Cryin’ that kept tugging my attention back whenever it started to drift; there’s an obvious passion for the story that it wants to tell that is constantly fighting to overcome the show’s copious shortcomings. It’s never enough to make me want to recommend the show, but there is part of me that wants to give it a second chance.

The nature of the show is thus that it is impossible to talk about it without issuing forth spoilers, so click away now if you want to remain unsullied for this show. 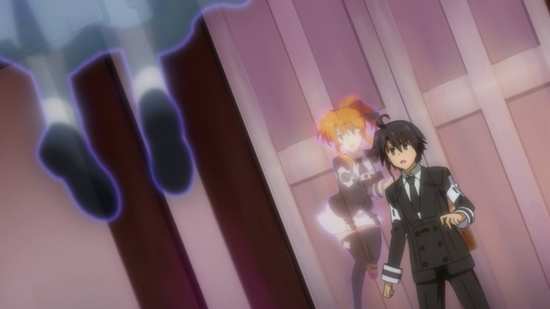 So this boy Tomo has a ghostly girl following him around everywhere, and he’s the only one who can see and interact with the peppy Misao. Or so he thinks. Then one day he comes into possession of a strange metal briefcase, a case that lots of people want and are willing to kill for. When he’s attacked, the case opens, and there appears from the shadows a giant robot, an Asura Machina called Kurogane (and here’s the important bit, Misao vanishes at the same time). This robot does Tomo’s bidding, and defends him from the attackers. When it vanishes, Misao reappears. 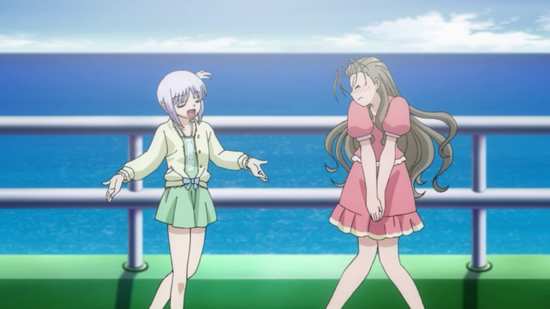 The attackers are demons, people with magical powers, and one of them is a cute girl from his school named Takatsuki. There is more than one student council at his school. The first student council is a religious type bunch of fanatics, that aren’t happy at Tomo getting this giant robot, and certainly aren’t happy at seeing him consorting with demons. They’re the second student council. Anyway, to avoid being attacked by either side, Tomo joins the Science Club in school, where the vice president is a cyborg named Shuri, who can launch projectile weapons from her limbs. 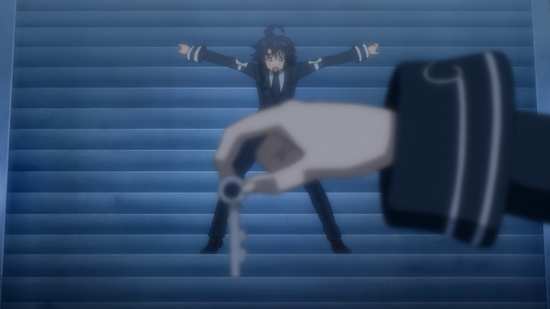 By this point it’s become clear that he’s not the only one with a friendly ghost, and a giant robot. The Holy Guard (the first student council) don’t want him consorting with demons because if he makes a contract with a demon, while possessing the Asura Machina/ghost combo, then that will beget an Asura Cryin’ which will threaten the world. It’s problematic because by this point Tomo is getting friendly with Takatsuki. Also if someone contracts with a demon, a Daughter is summoned, an otherworldly creature that becomes the demon’s familiar. And then at the end of the second episode we get the revelation that the world will end in 719 days, and all of this is tied to a plane crash some while back that many of the characters somehow survived. 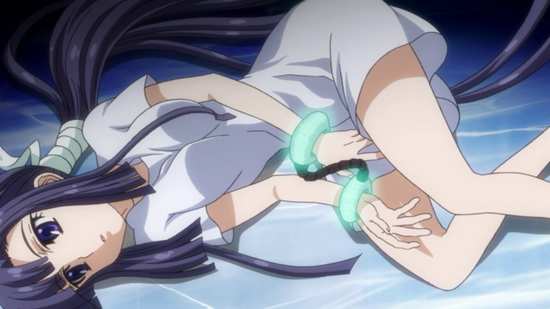 Asura Cryin’ keeps going in this vein, confusing and incoherent, until suddenly it decides to clear some things up, and we get a stretch of an episode that is devoted to an infodump, twenty odd minutes clarifying all that has come prior to that. This might be a good thing, but what follows is another layering on of a narrative mess, the introduction of a Luck Eater, ruins of a first world, more enigmatic characters, muddying things up until they have to clarify things with yet another infodump. 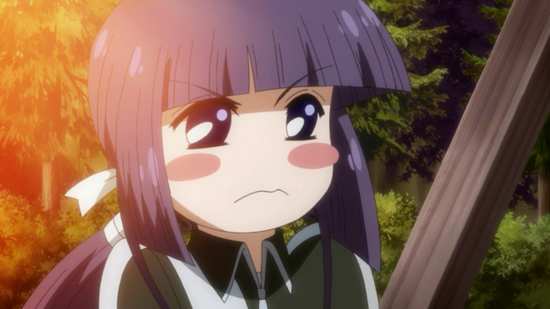 This structure continues right to the end of the show, which at least means it leaves on a positive note, with all loose ends tied up. I had a brief, hate/hate relationship with Horizon on the Middle of Nowhere, a show with a dizzyingly convoluted plot, character overload to the extreme, and a reliance on its own, specific jargon that alienated all but the most devoted audience, all unfolding at a breakneck pace that rendered the whole thing utterly incomprehensible to me. At the time I did wonder how the show would fare if it had taken the time to tell its story rather than delivering it like an avalanche. 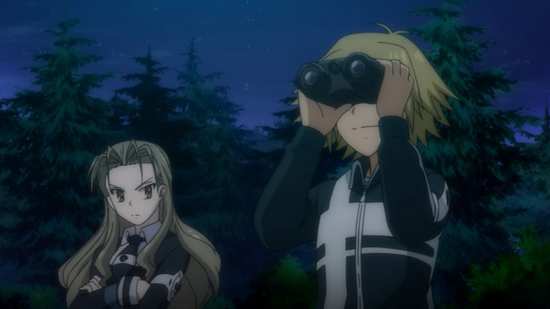 Well, now I know, for Asura Cryin’ is Horizon on the Middle of Nowhere, told without breaking any speed limits. It’s still an incomprehensible mess, but you do get enough breathing space to try and make sense of it. What emerges is a really quite compelling tale of parallel worlds connected by an apocalyptic tear in the fabric of space and time, with the disastrous events in one world having pressing consequences in the others. But by God it puts you through hell before you can eke any satisfaction from it. 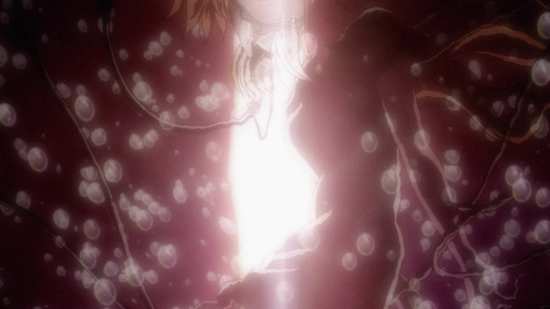 A solid premise is completely undone by awful storytelling, wafer thin characters, and second rate animation. The whole package gets a perfunctory release with underwhelming specs, bundling the whole 26 episode series in one go. I can’t recommend Asura Cryin’ but at the same time, I can’t deny that I’m going to give it another go in a few years, as I suspect that there might be more to it than meets the eye at first glance.