I had this theory, that most films broadcast on TV tended to date from 2 years previously, to back 20 years in time, and prior to that, it would only be the classics that would get repeated. So when I was growing up, it would be a window of time from the sixties to the eighties slowly shifting forwards as the years passed. What else could TV broadcasters do when films kept on being made, and there was only so much room in the schedule? This was before the advent of multi-platform TV with hundreds of channels, and plenty of dedicated classic movie channels, although I suspect my theory still holds true for the main channels at the top of any EPG. I now have a new theory, that it’s easier to find a film on Blu-ray than it is to find it in a TV guide. It’s probably the only way that I’ll get to see the classic wartime romcom Operation Petticoat again. After all, it dates from 1959, forty years outside of my theoretical window. 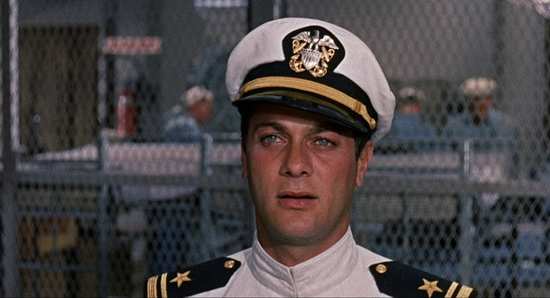 With the US poised to enter the Second World War, Lieutenant Commander Matt Sherman’s war looked to be over already, when his brand new submarine, the Sea Tiger is hit in an air raid and sunk. He’s not going to give up that easily. With the US pulling back from the South Sea, he has just two weeks to repair his boat enough to make it seaworthy, and get it to a proper repair yard. His problem is that key members of his crew have already been transferred, and he has to make do with whatever navy personnel he can get. 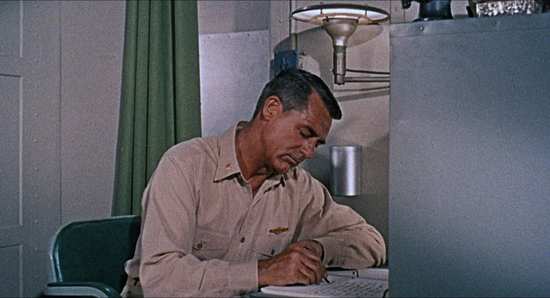 Lieutenant Nick Holden makes an immediate wrong impression, showing up at the dock with a coolie lugging his golf clubs, and dressed sharply like an effete popinjay, and he freely admits that he’s trying to marry his way into money. He also has none of the skills required to serve aboard a submarine. But that’s surface, as Holden grew up on the wrong side of the tracks, and he knows how to work the system. His ability to scrounge up the parts to get the Sea Tiger operational gets him the position of supply officer, but it’s an ability that is more trouble than it’s worth. When they have to stop at a small island to make emergency repairs, he comes back to the sub with five army nurses in tow, stranded after an enemy attack. And as everyone knows, women on a boat are bad luck. 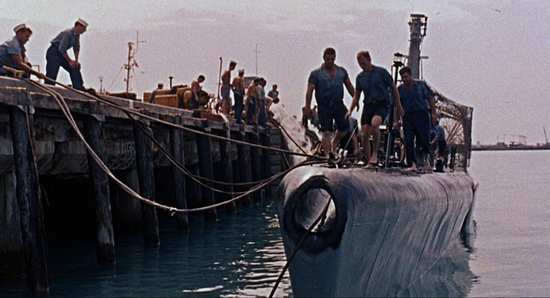 Operation Petticoat gets a 1.85:1 widescreen 1080p transfer with a PCM 2.0 English audio track, which I assume is mono. There are subtitles should you need them, but this is a film from 1959, back when actors used to enunciate. The image is of decent quality, taken from a new digital restoration. The picture is clear and consistent, with strong colours, and decent detail. The image is a tad softer than you’d expect from a more recent film, but it looks better than The Far Country, a film of a similar vintage that I reviewed recently. The sets and locations come across well, while the effects work is pretty good, the submarine model shots quite effective. There is the odd fleck on the print, and the occasional sign of age, but watching Operation Petticoat on Blu-ray is much better than the old TV viewings I remember. The dialogue is clear throughout, and the film gets suitable music. There might be the rare moment of crackle, but generally the audio experience is solid and robust.

The sole extra on this disc which you can access from the static menu is the 2:23 HD Trailer. 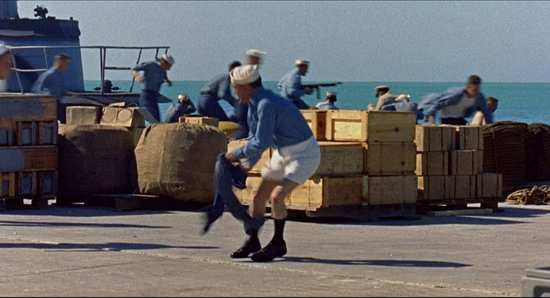 It’s an odd juxtaposition of genres that you don’t see as much these days; the wartime comedy. Back when standards and practices were a lot stricter, and you were restricted in the content you could show, the subjects you could discuss, then the realistic war movie was pretty much an oxymoron. I guess the perception of studio bosses was that audiences would rather see the heroes of war rather than the horrors of war. The fact of the matter is that you just wouldn’t get a film like Operation Petticoat made today, although in a bit of trivia, they did make a sitcom of the premise back in the late seventies, starring none other than Jamie Lee Curtis (her dad’s in this film as Nick Holden). 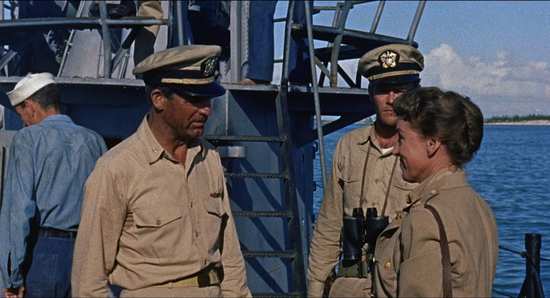 Operation Petticoat is more fun than it has any right to be, and a Blake Edwards comedy unlike the fare that we would later see from the director. It’s a light-hearted romp with plenty of pace, and a whole lot of charming humour. The seriousness of the war is rendered increasingly absurd when Sherman’s need to get back into the fight can only be accomplished by the aid of the unscrupulous Holden. Cary Grant is typically dry and deadpan in the role of the submarine commander, increasingly losing control of the situation, but trying to hang on for dear life. Tony Curtis is charming to the hilt as Holden, inventive and scheming as he claws his way up the social ladder, doing whatever it takes to get to where he needs to be. 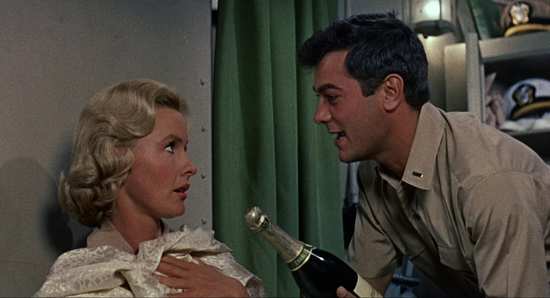 The fireworks between the two characters drive the comedy, especially at first. They’re both pulling in the same direction, share the same immediate goals, but there is also a sense of one-upmanship and rivalry, as Sherman has to turn a blind eye to Holden’s antics in service of repairing the boat, but also has to restrain his excesses, while Holden is always pushing the limits to see what he can get away with. And that delicate balance gets upturned when the women come on board, raising the comic tension as you’d expect with a boat full of sailors suddenly having to welcome five girls into their midst. 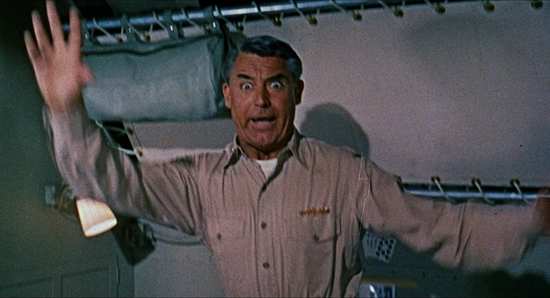 Operation Petticoat is still laugh out loud hilarious, even after sixty years. They really knew how to turn a phrase in these old Hollywood comedies, and the dialogue is a delight. It should be no surprise that the film was nominated for an Academy Award for Best Writing, Story and Screenplay, but I always thought that the Oscars never recognised comedies. The print does show its age, but I doubt you could get it looking better than it does on this Blu-ray.