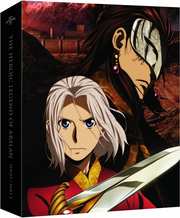 Synopsis:
New alliances are made and battle lines drawn in the final twelve episodes of The Heroic Legend of Arslan Series One, collected in this limited special edition set. Following the events at Peshawar, Arslan and his companions find themselves fighting the invading Shindra army, led by Prince Rajendra and are soon embroiled in a power struggle between Rajendra and his brother Gadevi. An alliance with Shindra may be just what the young Prince needs to defeat Silvermask but still standing between Arslan and his final goal are villainous double crosses, spies for both sides, duels in the desert and an army of 100,000 Lusitanian soldiers. Arslan has come a long way on his journey from boy to king but is he destined to fall at the final hurdle?

Special Features:
This stunning Special Collector’s Edition includes twelve artcards, character cards, a double sided poster and a 100 page book of character profiles, background info and artwork from the creative staff behind the most ‘heroic’ series in anime history!