At the time of writing, I have 30 Blu-rays on my to-watch pile, 30 anime Blu-rays that I have double-dipped to upgrade DVD versions, or dodgy Blu-ray releases. I have this compulsion to get shows that I like in as good as quality as possible, and that’s even for shows which are marginal in my appreciation. God help me if I ever upgrade to UHD! No.31 is this, Nyan Koi!, a really quite inventive harem comedy that throws in a quirky twist about a curse, and cats. It’s an early release from Sentai Filmworks, and before I’d put the first disc in, I’d quite forgotten something quite important about Sentai Filmworks’ early Blu-ray releases. They weren’t that good. 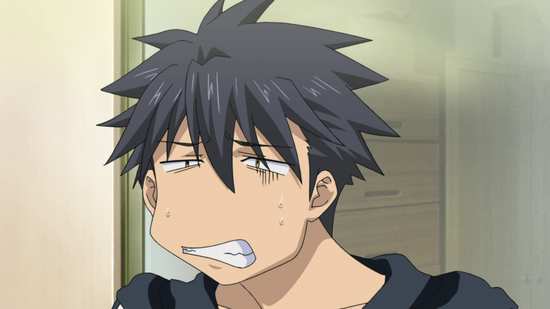 Junpei Kousaka is a high school boy with a problem. He’s allergic to cats. You might not think this would be so bad, but his family loves cats, and he’s often woken up by sneezing to the family moggy, Nyamsus. It gets worse. He’s got a crush on classmate Kaede Mizuno, and she loves cats. She hasn’t got it easy either, as her family are dog people, making her overcompensate every time she wants to show affection to a cute feline. 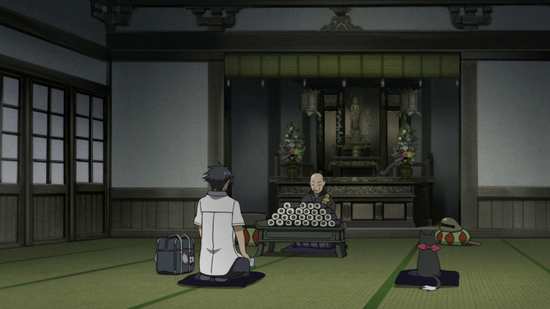 Then one day Junpei makes the mistake of kicking a can, missing the waste bin he was aiming at, and hitting the statue of a cat instead, decapitating it. The problem was that it’s a statue in a shrine, and by damaging it, Junpei has been cursed. He can now actually hear, and understand what cats are saying, and worse, he’ll eventually turn into a cat, which given his allergies will probably prove fatal. The only chance he has of breaking the curse is to help a hundred cats. It’s a good thing he can understand them then. 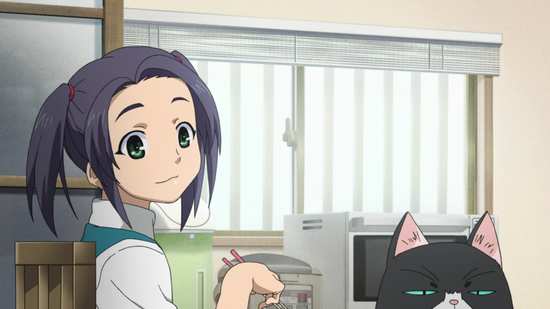 12 episodes of Nyan Koi are presented across two Blu-rays from MVM.

Disc 1
Kitty 1. The Scruffy Cat and the Cursed High Schooler
Kitty 2. That Man is a Manservant?
Kitty 3. Your Name Is...
Kitty 4. Beautiful People
Kitty 5. Times Square
Kitty 6. Milk and Bitters and Sugar and Spice
Kitty 7. Wait Until Dark
Kitty 8. The Passionate Private Running Coach
Kitty 9. Girls in the Water 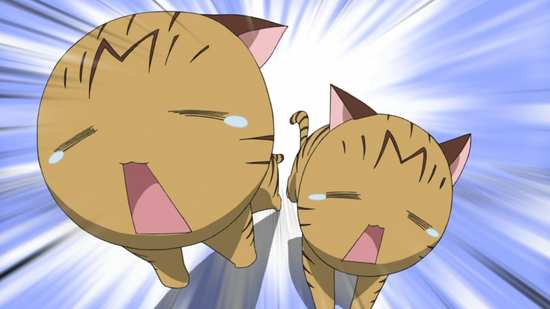 Nyan Koi gets a 1.78:1 widescreen 1080p transfer on these discs. It’s a nice transfer, clear and sharp throughout, with strong colours and no visible signs of compression, although there is the odd moment of banding. It’s a comparatively simplistic, comedy anime, so this isn’t a show for dramatic detail or elaborate visual design, but the animation is fluid and energetic, and even if the character designs are middle of the road for anime, they are pleasant and memorable enough. But I was unexpectedly impressed by the cat designs, as they all manage to be individual, and reflect their personalities too. 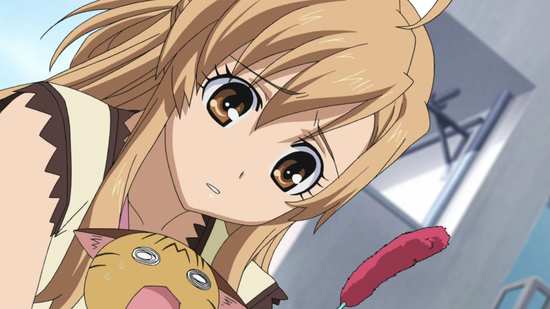 You have the choice between DTS-HD MA 2.0 Stereo English and Japanese, with optional translated subtitles and signs. The audio is clear throughout, without any glitches, while the subtitles are timed accurately. However, in a fault common to early Sentai Blu-rays, there are three captions in episode 2 from 6:55 onwards that are on screen for just one frame. Finding out what was said, and what text was translated involves skipping back and then using frame advance, pausing at the opportune moment. The theme songs are toe-tappingly forgettable, and the show’s few action sequences are represented well in the mix. While the voices, and indeed the characterisations are generic, the Japanese is still the way to go, unless you like an English dub overflowing with Japanese honorifics. 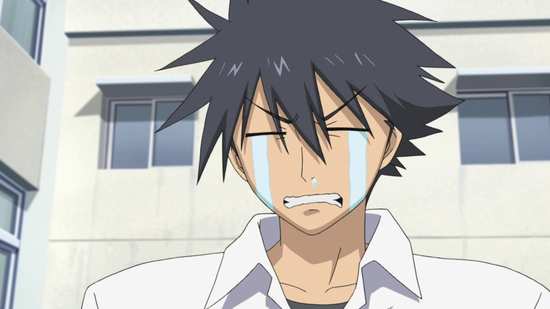 You get two discs on each inner face of a BD Amaray case. The discs boot to static menus, with each episode followed by a translated English credit scroll.

The extras are on disc 2 beginning with trailers for Shining Hearts, tsuritama, MEDAKA BOX, Inu x Boku SS, This Boy Caught a Merman, and ANOTHER. 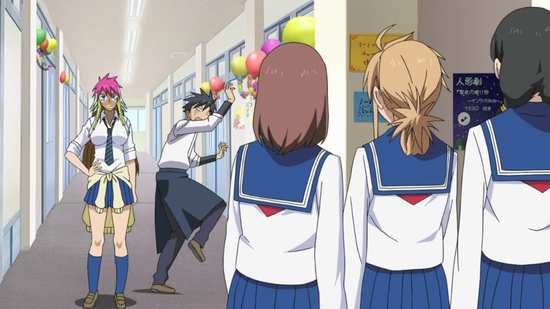 There should be a decay curve on the back of Blu-rays and DVDs, or next to online listings, indicating the re-watch value of a show. There are so many anime that I fall in love with the first time around due to the novelty; that novelty wears off with the re-watch. Not every show can be a Cowboy Bebop, which just gets better with age. Most have a fall-off, and the level of that fall-off indicates whether it’s worth investing in a show, putting down some hard cash for some tangible discs, instead of simply enjoying it once on Crunchyroll. Not every reviewer has the time to watch a show more than once, and you can’t do these things in short order anyway. On the other hand, I doubt I’d get too many review discs if I told people that they’d have to wait six months to a year for a review. 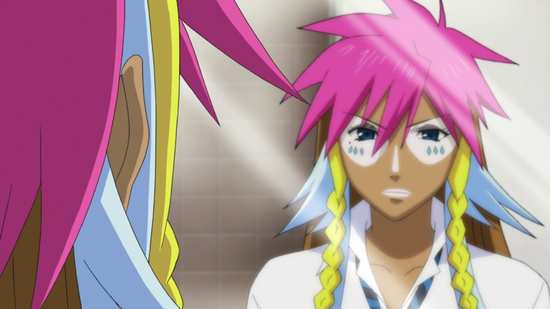 Nyan Koi! isn't as good the second time around, and it really is because the novelty wore off. The kitty-cat curse is just a means to an end, and the show is really all about the harem, and when it comes down to it, the characters are just a little too cookie cutter and clichéd to engender the kind of investment that a romantic comedy needs. Nyan Koi! is good enough to pass the time though. It is a romantic harem comedy, and the cat antics are just a means to an end here. Putting aside the inevitable disappointment at yet another genre title in a an already oversubscribed genre, Nyan Koi turned out to be a pretty fun harem comedy, with likeable enough characters and an engaging, if familiar story. 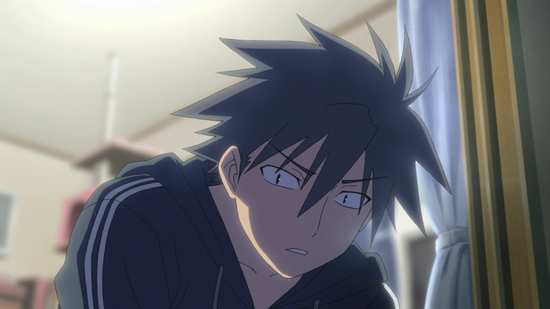 Junpei Kousaka is the typical hapless teen male in these situations, although he’s been nursing a serious crush on classmate Kaede Mizuno from afar. He also has the childhood friend in Kanako Sumiyoshi, a relationship that has the potential to blossom, at least from her perspective. Of course nothing would happen normally, with Junpei being typically hapless, were it not for the curse. Damaging a statue has left him in danger of turning into a cat, unless he helps a hundred cats. The problem is that he’s allergic to cats, but one benefit the curse has is that he’s now able to understand cats, and when his first ‘client’ asks him to protect him from the neighbourhood cat monster, it sets him down the path of harem romance. For the monster is Mizuno, whose family loves dogs, but she loves cats, and when she sees a cute kitty, she overcompensates, and supplies hugs like the Abominable Snowman in the Bugs Bunny cartoons. Junpei actually has to talk to her, and explain that cats don’t want to be so eagerly hugged. 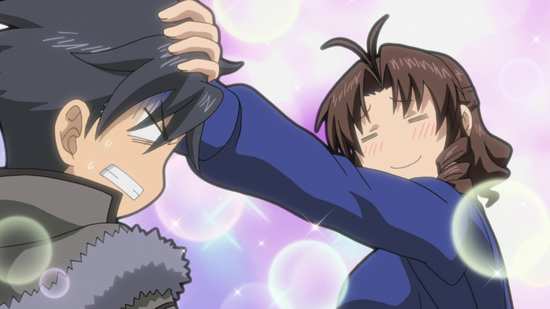 His childhood friend Sumiyoshi has taken on a style of aggressive make-up, and is even more aggressive to Junpei, but when the school moggy wants Junpei to thank the person that’s been feeding him and it turns out to be Sumiyoshi, another flag in the harem stakes is raised (and once Sumiyoshi ditches the make-up, she scrubs up pretty well, although she doesn’t lose the aggression). So it is that as Junpei helps more and more cats, he encounters more and more girls, the college student Chizuru working part-time as a post-woman, with no sense of direction, Mizuno’s protective upperclassman and yakuza heiress Nagi Ichinose, and temple twins Akari (tsundere) and Kotone (stalker) Kirishima. It’s almost like Love Hina but with added cats, and plenty of wacky stories and awkward situations ensue. 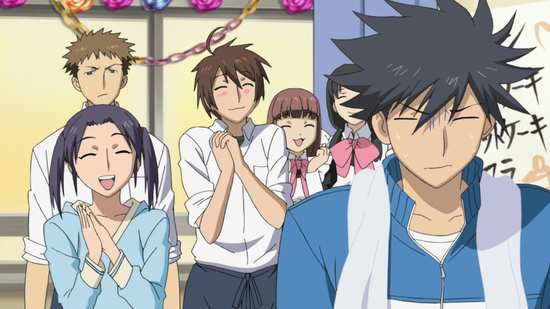 Nyan Koi primarily works because despite all the attention that Junpei gets, he’s fixated on his ideal girl, Mizuno, and his eye doesn’t stray at all, so his usual problem is trying to clear up any misconceptions that Mizuno develops because of the situations he finds himself in. He’s also not quite as hapless as the usual harem protagonists in that he is at least trying to make a connection with Mizuno, instead of spending his time vacillating and procrastinating. There is the requisite fan service to be sure, and the nosebleeds that ensue, but the stories are fun, the characters are likeable, and the cat interludes are entertaining too. Once in a while you get an episode where the two sides mesh, cats and girls, and those are the best episodes, but usually they are two separate story arcs, especially given Junpei’s need to keep his curse a secret from everyone. 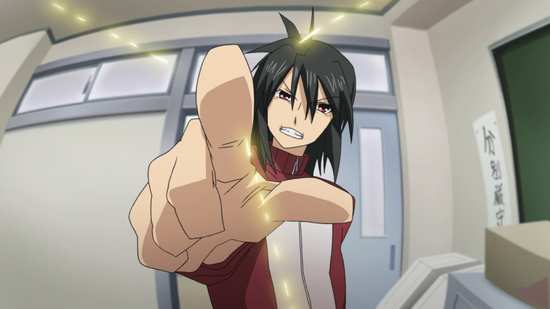 Nyan Koi is really a typical harem comedy, entertaining, funny, and likeable. That it hardly does anything new, or add much original to a well-trodden genre is beside the point. They are all variations on a theme anyway, and it’s down to the subtle differences to set each one apart in viewers’ eyes. The second time around, Nyan Koi loses that spark that made it feel original and individual. I will happily watch it, but despite the improvement in AV quality, I am feeling a little buyer’s remorse having double-dipped for the Blu-ray to replace the perfectly serviceable DVDs.