It was the week of release, and all along the top shelf at the supermarket were DVDs, Blu-rays, and 4k UHDs for the newest Hellboy movie, with David Harbour and Milla Jovovich. And on the bottom shelf was a budget copy of the original Hellboy movie from 2004 directed by Guillermo del Toro. I’ve left it this long to actually watch Hellboy, so I wasn’t going to take any chances with the reboot. This is the director’s cut version of the film, some ten minutes longer than the theatrical release, although I haven’t seen the original to compare. 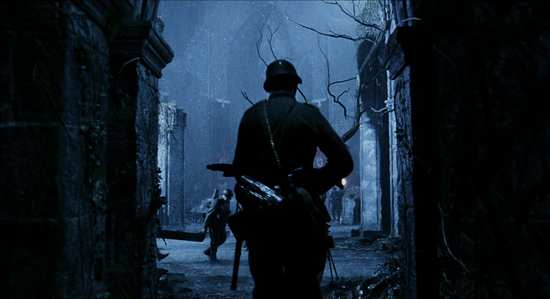 In 1944, Hitler, obsessed with the occult, sent his top assassin, and the mad monk himself, Rasputin, to an isolated Scottish isle to conduct a ritual to open a portal to hell. Thankfully for the course of the war, the Nazis were stopped in their black magic ritual by a squad of US soldiers, aided by a professor named Broom. But something came through the portal, a red skinned demon baby with a stone hand. Broom took Hellboy and adopted him as his son. 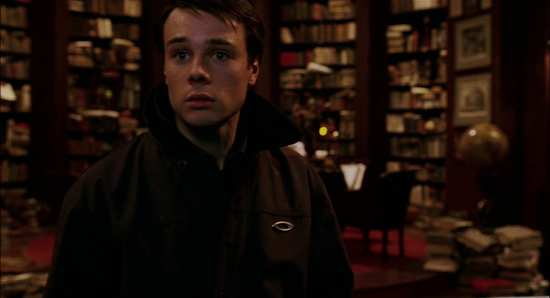 Fast forward to the modern day, and Hellboy’s all grown up, and works for the Bureau of Paranormal Research and Defence, the BPRD, fighting all sorts of paranormal waywardness that the general public has no need to ever know about. Their mission is one of secrecy, their headquarters disguised as a waste facility. Professor Broom runs the department, with Hellboy, an aquatic humanoid named Abe Sapien, and the newest recruit to the department, an FBI agent named John Myers. It’s supposed to be discreet, but they have a hard time keeping a lid on things, when Hellboy has a tendency to break out, and spend time with the girl he’s sweet on, a pyrokinetic named Liz who is currently in her ‘in’ phase of her ‘in-and-out of psychiatric institutions’ life. But the appearance of a demon in a local museum heralds the return of Rasputin and his minions, intent on finishing what they started in 1944, an apocalyptic plan for which Hellboy is the key. 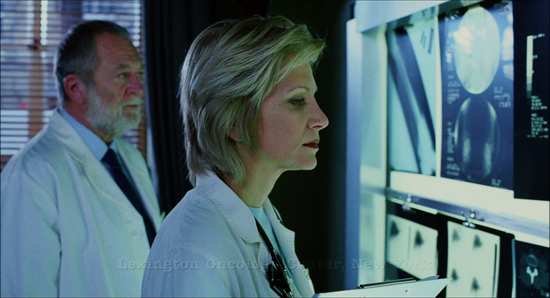 The film gets a 1.85:1 widescreen 1080p transfer on this disc, and in terms of audio, you have PCM 5.1 Surround, and Dolby Digital 5.1 Surround in both English and Spanish, with English, Spanish and Hindi subtitles. The transfer is excellent, clear and sharp, with rich detail, excellent contrast, and great dark detail. It’s immediately apparent when you see the 1944 sequence just how good this film looks in HD, and that clarity remains consistent throughout. It’s a wonderfully designed film as well, in terms of sets, costumes, especially make-up, while the special effects have held up well in an era where digital effects work can date by the week, not just the year. One issue that I did note was a bit of banding on the Hellboy title at the start of the film. I was happy with the PCM audio, a rich and robust soundtrack which makes great use of the surrounds. The dialogue is clear, and there is an eclectic selection of music to drive the story. You might have to turn the volume up a tad though. 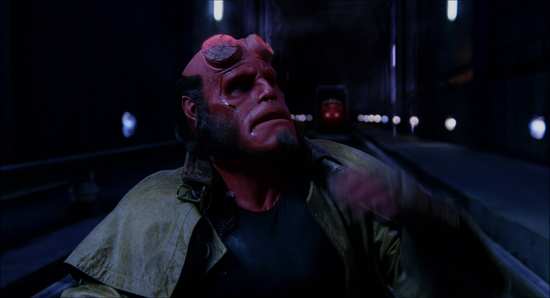 You get one disc in a BD Amaray, which boots to an animated menu. You also get an o-card slipcover for the film.

The disc is practically jam-packed with extra features, and it’s no surprise that most of them are in 480i SD format.

You get an excellent audio commentary from director Guillermo del Toro. 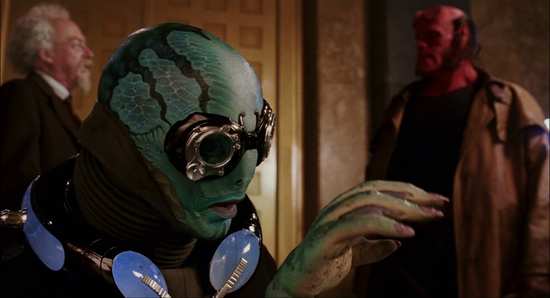 Hellboy: Seeds of Creation is the making of documentary, presented here in 6 parts, and running to an epic 143:08. It takes you through the shooting of the film, from pre-production to post-production.

There are 3 Deleted Scenes with or without audio commentary running to 4:28, although given that 2 have been restored to the director’s cut, they are a little redundant. 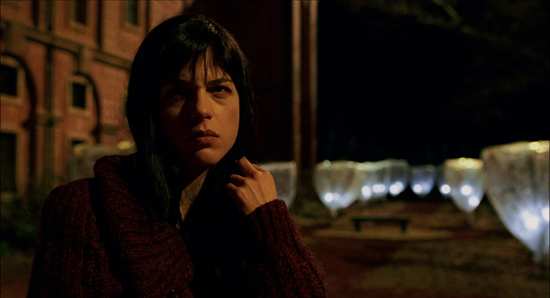 A Quick Guide to Understanding Comics with Scott McCloud lasts 12:19.

Finally there is a generic Blu-ray trailer, and the trailer for Ghost Rider. 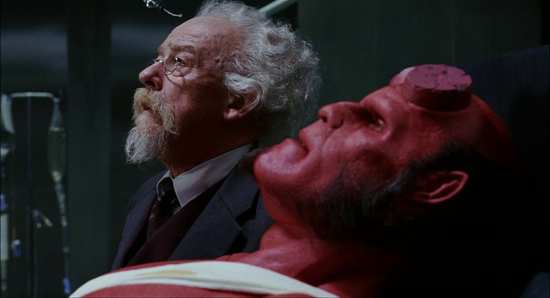 We may have nothing but superhero movies clogging up the multiplexes each summer, but go back just 20 years, and it was a gamble to make a movie about people wearing spandex and saving the world on a regular basis. It hadn’t been that long since Joel Schumacher had buried the Batman, but towards the end of the century, there came two movies that I believe made today’s cinema comic book saturation possible. One was the original X Men, which showed that you could do superhero movies without being camp and daft, and the other was Blade, which proved that audiences would accept dark and adult from comic book movies. If you could make a movie about a good-ish vampire fighting evil vampires, then why not make a movie about a good-ish demon fighting the forces of the occult? 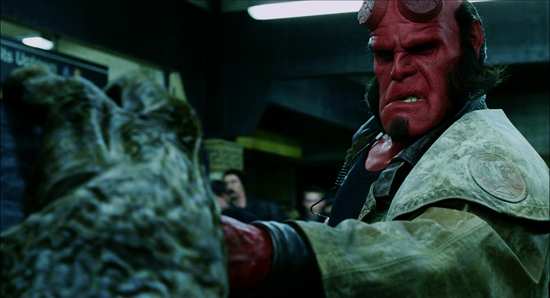 Hellboy wouldn’t have been contemplated previously, but it really does combine the best of both Blade and X-Men, tackling atypical subject matter but making it appeal to a wide audience. It could have been the best of both worlds, but in my opinion, Hellboy isn’t quite in the same tier. It’s all about balance you see. Hellboy is fun, it’s action packed and entertaining, it has a good story, and some great dialogue, and I have to say that I do prefer it to some of the more recent comic book offerings from both DC and Marvel. 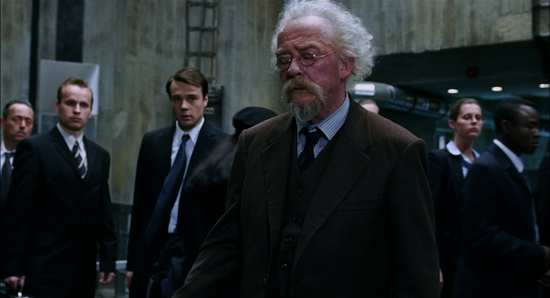 This comic book universe is less about superpowers, and more about the occult, and it begins with the Nazis trying to bring about Armageddon towards the end of the Second World War, by opening a portal to the Abyss. The Allies interrupt and when Hellboy comes through the portal, he’s raised by a good guy, Professor Broom, instead of being put to his original purpose. We’re subsequently introduced to the BPRD, through the eyes of new recruit John Myers, and we learn of this world of the occult hidden behind the real world, and this organisation tasked with dealing with all the strange and the unholy that appears, all while keeping it secret. We also meet the grown up Hellboy, a cigar chomping devil with a samurai haircut and a bad attitude. It may have been sixty odd years, but he’s something of a teenager at this point, nursing a crush on Liz, while suffering a complex about his differences. 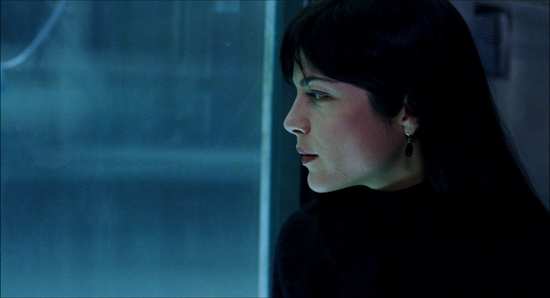 The Nazis have unfinished business though, and they’re back to finish what they started, It’s the kind of yarn that you’d tune into watch, right? It plays out like a great action adventure, and there’s more than a little of the Indiana Jones about the story, as there’s some globetrotting, and plenty of catacombs to explore and have battles in, and unravelling the occult usually means ancient legends, dusty books, and no little research. 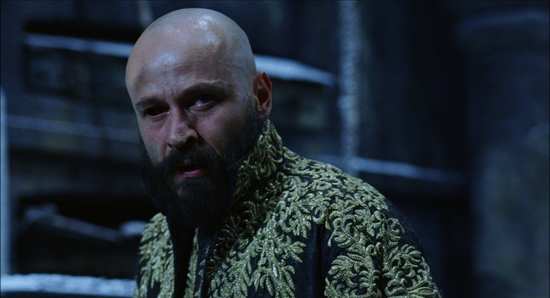 However it comes down to balance as I said, and this is a film where the title character actually overwhelms. Hellboy is such an iconic creation (Ron Perlman could rightly claim it as a definitive role) that he steals the movie. He doesn’t need to, or indeed tries to, but he’s so visually evocative, his every word worth hanging on, that the rest of the cast seems paper thin in comparison. This is especially true of the villains of the piece, something that you wouldn’t expect to be heard about Nazis, but after a compelling introduction, Ilsa is almost invisible, Karl Ruprecht Kroenen is effective, but silent, while Rasputin’s character pretty much feels wasted. There’s no meat on their bones to rival that of the hero. And while everything I’ve read and heard about this movie espouses the character of Abe Sapien, I just wish there was more of him. 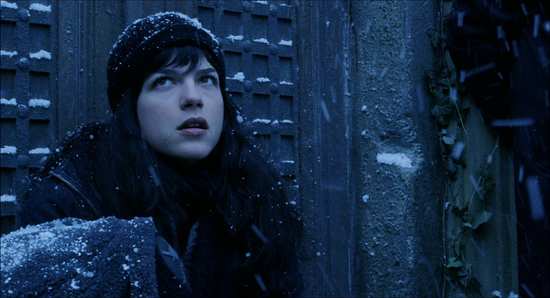 Hellboy is fun, and it’s well worth watching, while the rich dividends this release gives in terms of extra features makes it an easy disc to recommend buying. The film isn’t perfect, but it has more in the way of depth and character in ten minutes than many modern superhero movies manage in their total runtimes. And it has got me looking for the second film, which is a whole other palaver if you’re not 4k ready.