It seems you don’t have to wait for the results to deem an experiment a success. Before, long running shonen shows adapted to TV anime tended to get interminable runs. Shows like Naruto and One Piece would run endlessly, adapting manga material stretched wafer thin to last as long as possible, and when that ran out, there would be filler episodes to take up the slack. Attack on Titan is one of these long running manga, but when it came to the anime adaptation, they decided to do things differently. They would adapt the manga faithfully, with an eye to story pace and drama, and when the manga dried up, they would put the show on hiatus, continue the story in a later season. It makes for great viewing. We had a two-cour first season, followed by a single cour second. They’ve been released here in the UK by Manga and by Sony. With Funimation’s purchase of Manga, their titles have a new permanent home in the UK, and for Season 3, the Manga label is back. The season 3 disc release in 2 parts actually comprises Seasons 3 and 4 of the anime, which is a little bit confusing. Season 3’s 12 episodes were released in 2018, and 10 episodes of season 4 were broadcast a few months ago. The enigmatically titled The Final Season is scheduled for 2020. But other shows have started to ape Attack on Titan’s release format, airing adapted episodes in seasons, rather than running endlessly padded by filler. This can only be a good thing for fans... 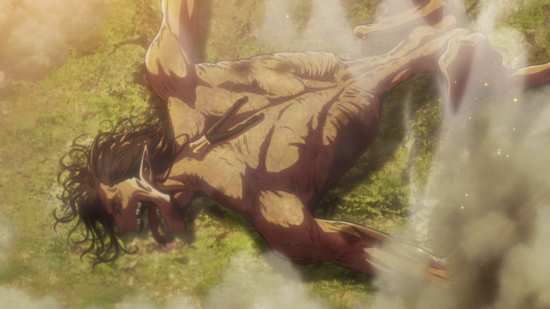 A hundred years previously, the Titans came. No one knows from where, or what they wanted; giant naked beasts in human form, with no other thought or instinct than to hunt and devour humans. There was no defence, no comprehending these mindless enemies. Humanity was almost wiped out, the few survivors seeking refuge in a small parcel of land, defended by fifty meter high walls, higher than any known Titan. And so mankind has endured in relative safety for the last hundred years, a small enclave in what used to be their world. Dreaming of the outside world has become a taboo, understandable when the few military expeditions sent out to reclaim lost territory always come back having suffered devastating losses. 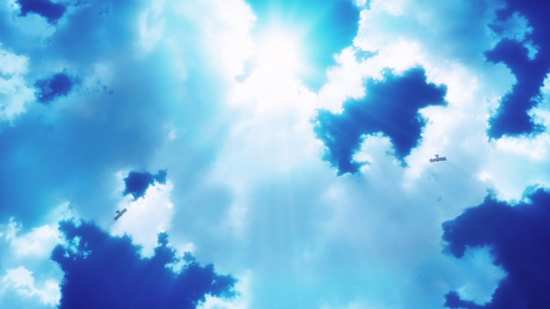 That doesn’t stop the young from dreaming of a free world, and friends Eren Jaeger and Arwin Arlelt long for the day that they can explore the world that they’ve been denied all their lives. It’s only the pragmatism of their friend Mikasa Ackerman that keeps their wild dreams in check. Eren’s mother certainly wouldn’t hear of him joining the Scouts that venture outside the walls and suffer such devastating losses. Then the Titans return, heralded by a previously unknown Colossal Titan that towers over the perimeter walls, with an Armored Titan that breaches those walls to let the rest of the man-eaters in. Suddenly, humanity is forced to retreat from its own, meagre remaining territory once more, pushed back from the lands bounded by the outer wall Maria, to the inner boundary of Wall Rose. And Eren’s left with an unfathomable desire for vengeance, to slaughter every last remaining Titan and reclaim the world. 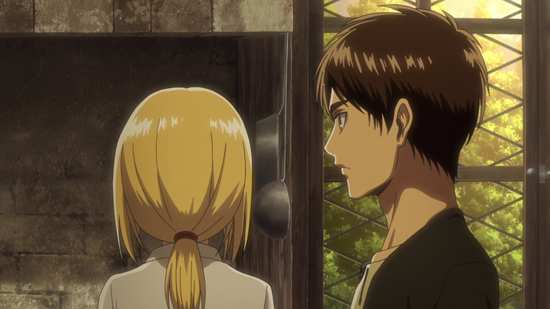 Five years later, the three friends have graduated military training with flying colours, and have shunned the prestigious military police, the comparatively safe guards, to sign up for the Scouts, but they have no time to settle into their new roles as humanity’s vanguard, when the Colossal Titan reappears at Wall Rose, and the Titan onslaught resumes. This time Eren will get payback, this time Eren will have his revenge, but there’s something about Eren that no-one knows, not even Eren himself. It transpires that Eren might just be the weapon against the Titans that humanity needs, or he might just be the biggest threat that humanity faces. The battle for survival continues in this third season of Attack on Titan, and if you thought there weren’t any more shocking secrets to be revealed, think again. Twelve more episodes are presented across two discs from Manga Entertainment. 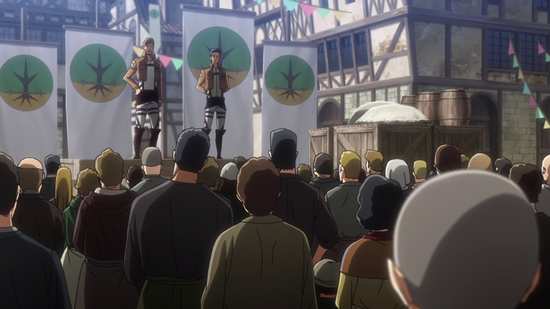 Stick around for the end credits on episode 49 for a sting in the tail. 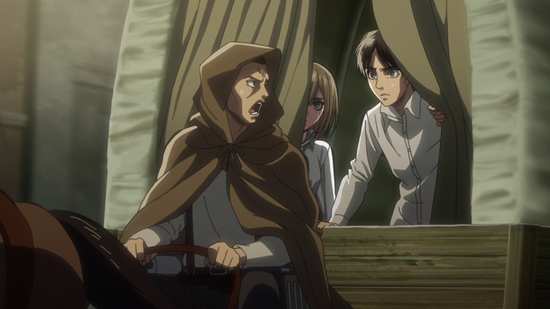 Attack on Titan gets a 1.78:1 widescreen transfer at 1080p resolution, on two dual layer discs. The image is clear and sharp throughout, with no visible aliasing or compression. Even the perennial problem of digital banding is kept to a minimum here, really only restricted to darker scenes. 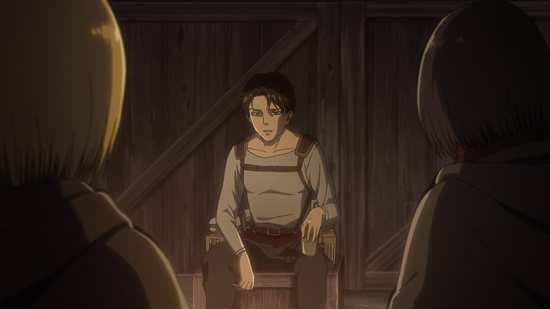 Attack on Titan’s visual aesthetic is astounding, and comes to life with impressive impact on Blu-ray. The character designs are typical anime, but are drawn with bold outlines and shadow detail to make them stand out against the backgrounds. Those backgrounds are detailed and stylish, evoking that pseudo-mediaeval feel with North and Central European architecture. The show also uses a diminished colour palette, eschewing the bright and primary (except for blood), and opting instead for autumnal, pastel shades. On top of that the animation is excellent, detailed, fluid, and atmospheric. The aerial action sequences have to be seen to be believed. The Spider-man movies should take a leaf from Attack on Titan. 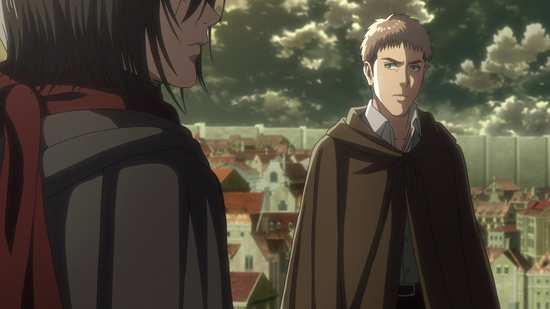 You have the choice between Dolby TrueHD 2.0 Stereo Japanese and 5.1 Surround English, with translated subtitles and a signs only track locked during playback. I went with the Japanese audio as always, and was happy enough with original voice actor performances, suitably histrionic for such an over the top show. What I sampled of the English dub was acceptable enough, with the actors rising up to the dramatic challenge. Certainly the 5.1 up-mix from Funimation really does enhance the show’s dynamic action sequences, and it’s a shame that the Japanese audio couldn’t have been mastered in surround for a change. Alas not a lot of Japanese television gets the surround treatment in Japan. Manga Entertainment return to the Attack on Titan franchise after Season 2 was released by Sony, and this time they are using Funimation’s discs (well, Funimation own Manga now so it would be daft if they didn’t) and there are no problems with the subtitling. 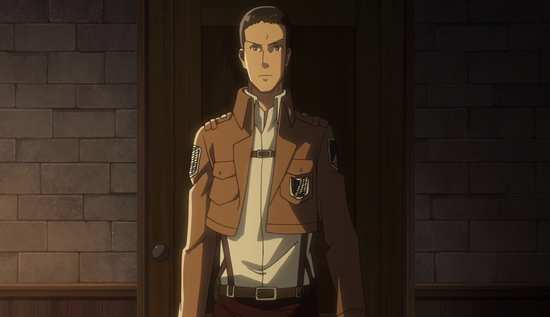 The discs boot to animated menus, and you get the Marathon Play option if you wish to forego credit sequences.

Disc 1 autoplays with a trailer for Funimation Now.

You get an audio commentary with episode 40 with ADR Director and voice of Jean, Mike McFarland, J. Michael Tatum (Erwin), and Bryn Apprill (Christa/Historia). 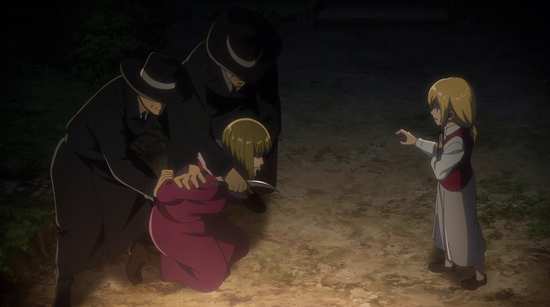 Disc 2 is practically jam packed with extra features, certainly compared to the usual anime release in the West. 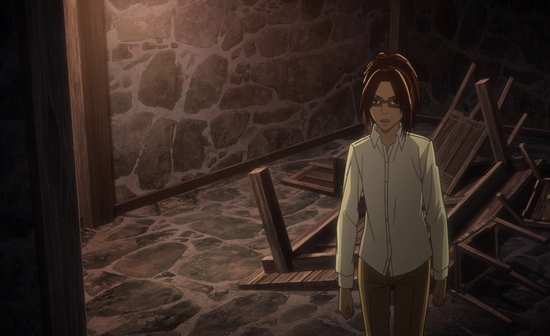 The Directors Break Down Episode 46 lasts 23:54, and is a picture in picture affair with the Japanese directors of the show, Executive Director Tetsuro Araki, and Director Masashi Koizuka. This is subtitles of course. 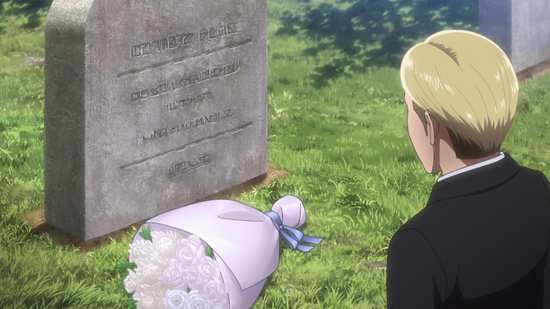 The Eyecatch Gallery translates the ad bumpers which aren’t translated in the episodes proper.

Finally there are the textless credits for the season.

I haven’t seen the physical extras that come with this release to comment. 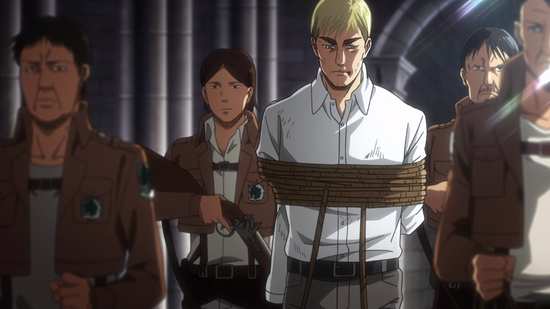 Attack on Titan hit with ‘next big thing’ intensity when Season 1 debuted. Its tale of a post apocalyptic feudal future, where the few survivors of humanity hunker down in a walled enclave, fearing the carnivorous Titans outside really captured fan attention. For a moment there it looked like the next break out anime, the show that would transcend the medium and hit the mainstream. Certainly Season 1 provided more than a few watercooler moments, and people who hadn’t seen anime before were talking about it. Alas, that didn’t sustain, not helped by a couple of weak live action movie adaptations. And when Season 2 arrived, while it had plenty of revelations, it was more of the same, and hampered by poor narrative structure. But now Season 3 is here, and I have to say it is the best Attack on Titan yet. 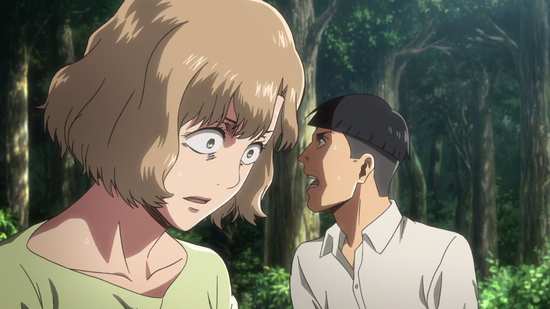 The thing about Season 3 is that for these 12 episodes, the story turns inward. The focus shifts from the Titans outside, the Scouts oft-stated goal to retake the outer Wall Maria, and eventually eradicate the Titans and retake the world as well. This collection is all about the rulers of the city, their plans for the Scouts, and for Eren in particular. We learn far more about this world, and how this state of affairs came to pass; there are plenty of revelations about the story and the characters, and as conflict arises, it’s far more arresting when both antagonists and protagonists are human, with recognisable motivations. 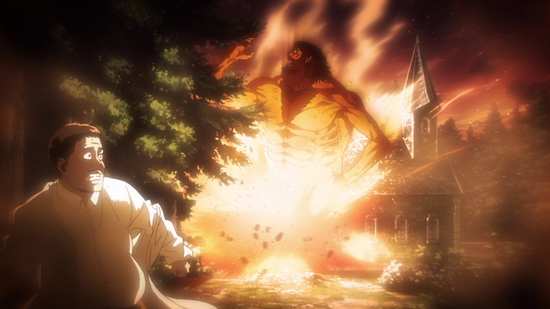 As this collection starts, the Levi Squad are in hiding, contemplating their next move in reclaiming Wall Maria, but it soon becomes apparent that the rulers are cracking down on the Scouts. They want Eren and Christa/Historia and they’ve sent the Interior Police against them. The Scout Regiment is tooled up and trained to deal with Titans, the Military Police administers justice for the humans living within the walls, and the Interior Police are the elite of the MPs, tool of the rulers, and similarly equipped and trained like the Scout Regiment with ODM gear, but with weapons designed to kill humans, not Titans. To Levi’s shock, he learns that the leader of the Interior Police is a man named Kenny, the man who raised him, and had a reputation as a killer of MPs. Now he’s working for the very organisation he detests, and he approaches his work with the same psychopathic intensity he had before. 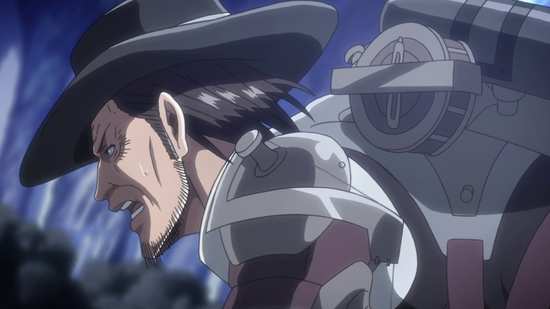 All loyalty inside the walls is directed to the king, and it’s in his name that Eren and Historia are taken, but as we learn in this collection, not all is as it seems when it comes to royalty, and there has been a secret conspiracy to keep humanity subjugated in the walls for the last hundred years, cowering beneath the threat of the Titans. And it’s also apparent that the rulers know more about the Titans than they ever let on. Eren and Historia are just pieces in the grand chess game to maintain the status quo in the walls. It turns out that Erwin has different plans, and he embarks on the most perilous course of action yet, one which will pit humans against humans. 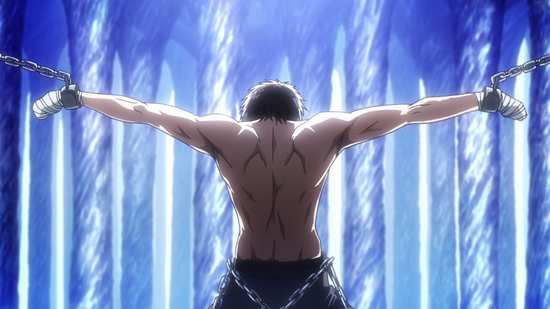 I was hooked on this collection of Attack on Titan. The character and story development in these episodes is mesmerising, and adds so much dimension and structure to Attack on Titan’s world. You don’t have all the answers certainly, but you do get some idea of how this world works the way it does, and what is motivating the characters in the choices they make. Season 1 was a great action show, pitting human against Titan, the inside world against the outside world. Season 2 added the layer that the simplistic nature of Titans was deceptive, and there was more going on outside the walls than mindless behemoths wandering about looking for people to eat. Season 3 reveals the complex nature of humanity inside the walls, and how it is connected to the Titans. It looks as if this entire world has been created by design, and the hope is that subsequent seasons will reveal just who that designer is. Your attention may have strayed with Season 2 of Attack on Titan; I know mine certainly did, but Season 3 really does draw you back in. Hopefully the next part of Season 3 won’t take as long to come, especially given the way that episode 49 ended.