All the Anime release some great stuff for us UK fans, often packages that the rest of the world don’t get, extra goodies that other people can be envious of for a change. The cost of such exclusivity is a rather tenuous release schedule, with shows getting released when they are ready, once the discs are just right, and when the production committee have signed off on all that gorgeous packaging and physical extras. It’s why anime fans have come to expect delays from All the Anime, the last minute slippages, as that tends to serve as a guarantee of quality. The first Persona 3 movie took a little longer to get here, but for a change, it seems that All the Anime are sticking to a monthly schedule for the subsequent three movies. It’s been just over a month since the release of the first movie, and now Persona 3: The Movie #2 – A Midsummer Knight’s Dream is here for review. And it seems that sticking to the schedule has exacted an unfortunate price... 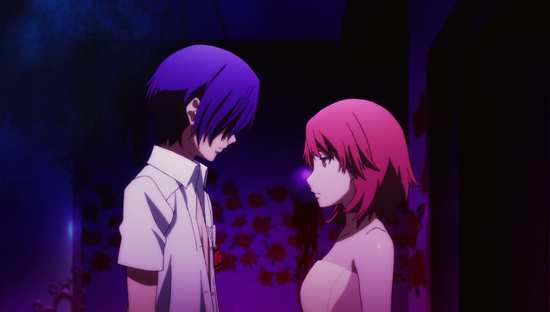 The anime adaptation of the Persona 3 videogame tells the story of Makoto Yuki, who lives in a world where everything stops at midnight, heralding the Dark Hour, when Shadows are abroad, preying on the unfortunate souls that have become trapped in that eldritch hour. Yuki and his friends in the S.E.E.S group have the ability to awaken their Personas, manifestations of their power in the form of mighty avatars, to do battle with the Shadows and protect their world, although oddly enough, the Shadow activity seems to centre on their High School, which during the Dark Hour transforms into an ominous tower dubbed Tartaros. 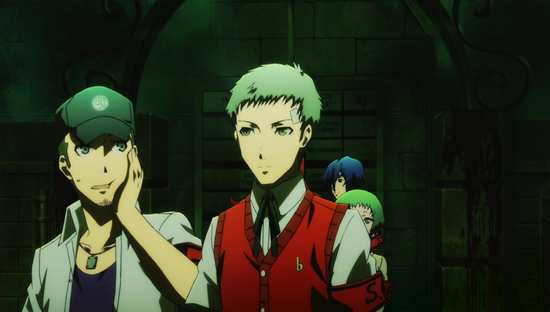 Summer is upon the friends, and the battle against the Shadows continues. But things are about to get complicated. For one thing, they’re being observed by a group of people who also operate during the Dark Hour but with malicious intent, and the S.E.E.S. group’s intentions are against their interests. But summer also means a summer camp, the island of Yakushima, where beaches and girls in swimsuits beckon. But the head of the Kirijo group, sponsors of S.E.E.S is also there, with some dark revelations about the Shadows and their origin to impart. While Yuki will make some new friends and allies in his fight against the Shadows, at a critical moment, a hesitation will lead to tragedy.

This time I got to take a look at both the BD and DVD check discs for this collector’s edition. 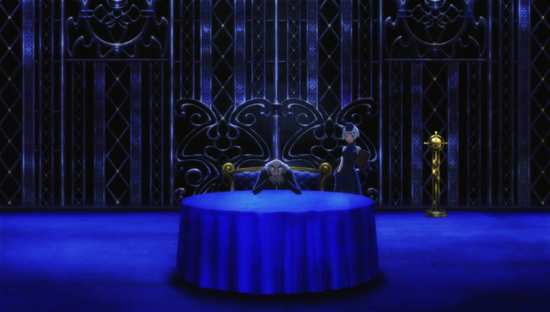 The second Persona 3 movie gets a 1.78:1 widescreen transfer on this Blu-ray disc, and it isn’t much changed from the first film. It comes across really quite well, clean and crisp throughout with good levels of detail, sharp line art, and strong colour reproduction. There is minimal banding, only rarely apparent, and certainly not as extensive as it was on Kazé’s Persona 4 discs. Black levels could be a little stronger, but by and large the film is very watchable. When it comes to character art and the gradated colour palette, you can see a similarity of style between the two iterations of Persona, but the theatrical presentation means that the animation is a lot stronger, more detailed, with the action sequences looking suitably impressive. 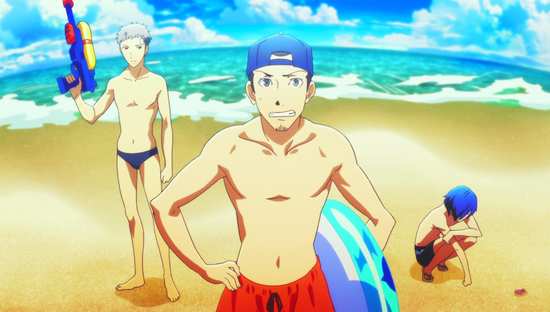 And here’s where the roof caves in, metaphorically speaking. I was hoping that the DTS-HD MA 5.1 Surround Japanese experience would be little changed from the first film, but in an authoring fault, the audio is matrixed incorrectly. The central dialogue channel now comes from the rear left, front left and front right speakers, not the centre speaker. It was bad enough for me to eject the disc and try the DVD instead, which has the exact same fault for its DD 5.1 audio. Downmixing to stereo is an option, and even better is to channel the audio through the TV’s speakers to get a more focused, frontal audio experience, but the dialogue still sounds hollow. 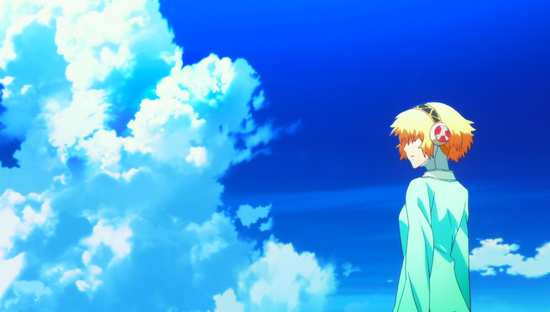 The disc boots to a static menu. On both the BD and DVD, you’ll find an 8:28 trailer reel for the movies. While there is a standard DVD release, this Collector’s Edition Blu-ray is a combo release, but I can’t comment on the packaging or any physical extras. 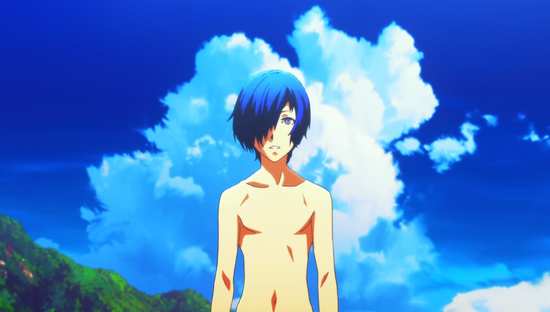 It becomes apparent at this point that the Persona universe, or rather universes, just don’t appeal to me, and it’s unlikely that I’ll have a change of heart anytime soon. The characterisations, the way the stories are structured, punctuating the plot with moments of triviality, the scenes of exposition infodump, all leave me drifting off, finding it hard to focus on the film. For the second time in as many films, I fell asleep in the middle, and had to skip back. That’s no way to watch a movie. The thing is that I can accept these faults in other franchises; it’s just that once I make the cognitive connection that a piece of entertainment exists primarily as a promotional tool, I tend to dismiss it. It happened to me back in the days of Pokemon and Digimon and the like, anime spun off a continuing series of video and card games, and it happened to me with Persona too. 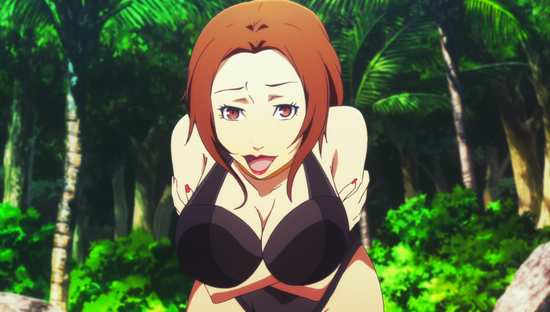 It’s completely unfair of me, and you’ll be quite right in dismissing this review as effectively meaningless if you are a fan of the Persona franchise. The thing is that beneath all the things I disdain, I can actually recognise that Persona 3’s second movie, A Midsummer Knight’s Dream is actually pretty good, an improvement over the first film and leagues better than the Persona 4 series that first had me looking for the exit door from this franchise. 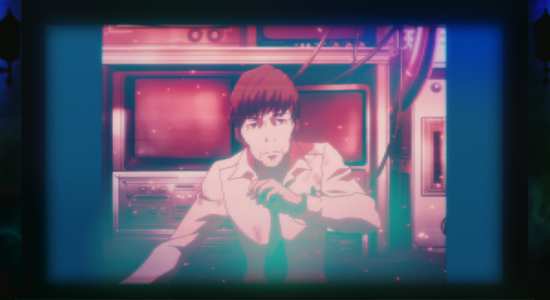 The film starts with the obligatory beach and swimsuits ‘episode’, which allows for much goofing off and lightness. The boys of the group try and chat-up every girl they encounter only to be shot down, but the fear really sets in when a predatory female pounces on them in return. One of the dafter moments in the film is the introduction of one of the sillier characters, the Shadow fighting android Aegis, who insists on sticking to Yuki like glue thereafter. She’s not the only silly idea. There’s a Shadow fighting dog as well. On the bright side, at least Aegis doesn’t have to ‘shoot’ herself in the head to activate her Persona. But the beach diversion does lead to the exposition infodump explaining the whole Dark Hour and Shadows, providing motivation for the group to end the Shadow threat sooner rather than later. It also makes things very personal for one of them, as Yukari finds out that her father is implicated in this mess. It doesn’t pan out in this movie, and hopefully it will be revisited in the third and fourth films. 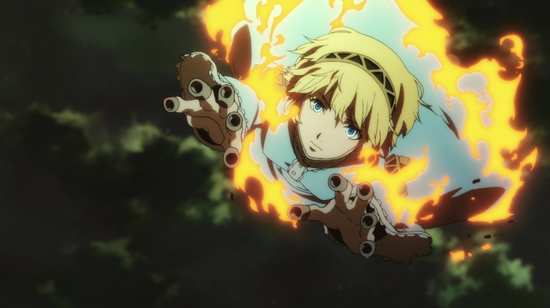 The second interesting development is the reveal that a group of people are using the Dark Hour for nefarious purposes. As victims of the Shadows in the Dark Hour appear in normal space as victims of unexplained accidents, a group of assassins have turned that to their advantage, and are now killing their targets in the Dark Hour and leaving no evidence of their actions. With the S.E.E.S. group now tasked with ending the Shadow problem and the Dark Hour once and for all, that’s going to cut into the assassins’ business, and the two groups are heading for a confrontation. 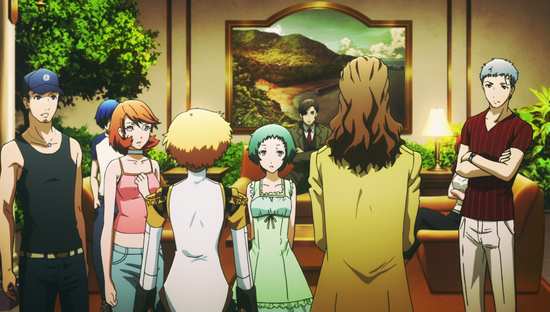 The previous film introduced the Shinjiro character, a former member of the S.E.E.S. group, and in this film we learn more of why he left, namely that he can no longer control his Persona. To make matters more complicated, he’s taking a drug to suppress it, and his supplier is none other than the leader of the assassin group, and naturally he wants information about S.E.E.S. in exchange for the drug. At the same time, S.E.E.S. gets a new member, a young boy named Ken Amada who is precocious in his ability to manifest a Persona, while he’s determined to avenge his mother, who was killed in a Shadow attack some years previously. 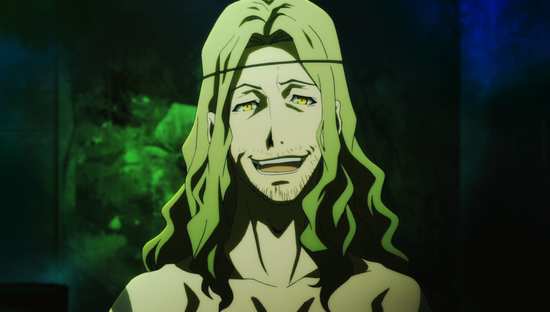 Finally, it begins to dawn on the friends that defeating the Shadows, ending the Dark Hour essentially mean giving all this up, the camaraderie potentially, but the Personas certainly, and also the sense that you’re contributing to something meaningful. For Yuki, who has otherwise lived a non-descript life, this realisation gives him pause, and pause at the worst possible moment. 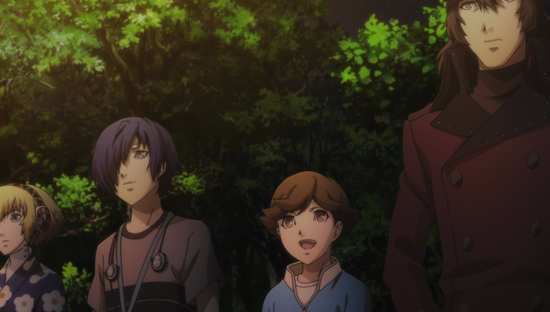 You can tell from all of this, that Persona 3’s second movie has a lot going for it in terms of its story. And once again, Yuki gets more in the way of character development here than Yu Narukami got in the whole of the Persona 4 series. Yet it still leaves me cold. I like what I like, and I don’t like what I don’t like, and sad to say that Persona falls into the latter category. Objectively I can tell that this is a better film than the first. There’s no argument that these discs are a disappointment when it comes to the audio experience, however. The best way to watch A Midsummer Knight’s Dream is on a mono TV.