I thought that a Bayonetta was something that went on the end of a Rifle-a... Consider that fair warning of where this review is coming from. This film has fallen into the hands of a reviewer who hasn’t played a videogame with any serious intent in over a decade, someone who’s never heard of Bayonetta, and someone who will be approaching this film with the level of knowledge and attitude that genuine fans of the character, game, and film will no doubt find laughable, if not actually offensive. I’ll be honest and say that the first time I saw the Bayonetta character art, I wondered if she was an anime porn star. Of course finding out the novel use she has for her hair in this movie, I’m not fully convinced otherwise... 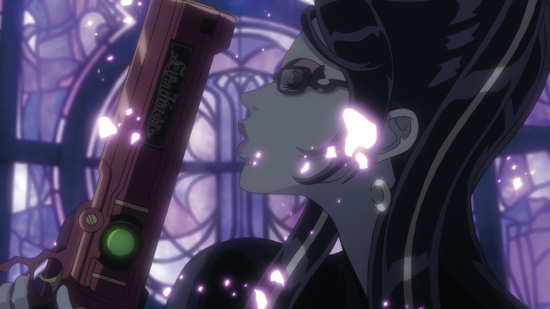 When you start the film, you’re regaled with exposition man filling you in on all you need to know about this story, about the Umbra Witches and the Lumen Sages that were supposed to maintain the balance in the world, until a witch and a sage fell in love and gave birth to a forbidden child. That precipitated a war between the witches and the sages that wiped them all out... almost. Now, five hundred years later, the witch Bayonetta has appeared, and she gets her kicks from hunting and killing angels. Only she has no memory of the past, beyond what she’s experienced since she awoke 20 years previously. But she’s a key player in an ancient prophecy, one of the reasons that angels keep attacking her. The prophecy says that when the Left Eye and the Right Eye are reunited, the creator Jubileus will be resurrected, and a new world will be born. That doesn’t bode well for the old world. 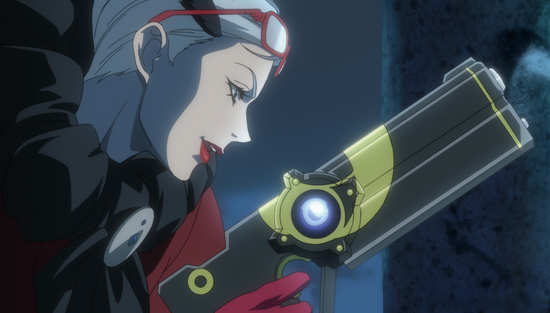 Bayonetta has her hands full just dealing with the angels, and fending off a photographer named Luka, who keeps trying to prove that Bayonetta murdered his father. But suddenly there’s another Witch abroad, and it looks like a Sage has returned too, the head of a church cult at the centre of mass suicides, and if that isn’t enough, Bayonetta suddenly has a kid to look after, a girl named Cereza who insists on calling her mummy, and Bayonetta isn’t the maternal type!

Bayonetta: Bloody Fate is released on a single layer Blu-ray disc, authored locally by Manga Entertainment. The image is presented in 1.78:1 widescreen 1080p, and is pretty much what you would expect from a Funimation sourced transfer, clear and sharp throughout, with strong atmospheric colours, and smooth animation, with just a hint of digital banding in darker scenes. Manga supplies their usual DTS-HD MA soundtracks as opposed to Funimation’s Dolby TrueHD, and here we get 5.1 Surround for both English and Japanese. I went with the Japanese and found it to be a mostly front heavy affair, needing a nudge on the volume to get to a decent level where the action and music make an impact. I gave the dub a try, and apparently they have a continuity of cast between the games and the movie, although I wouldn’t know. It all seemed good enough. 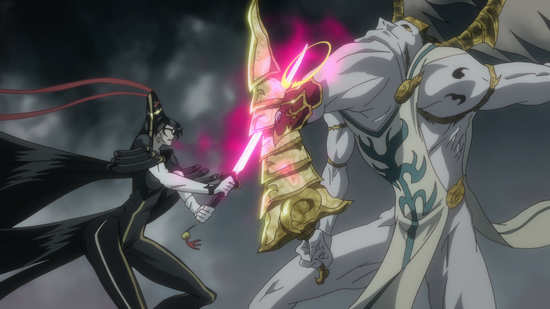 This being a Manga authored disc, the immediate worry is with the subtitles. They use their pale white font as usual, the subtitles are accurately timed and free of error, and without on screen signs and text, or multiple conversations to translate, there’s no subtitle clash, and it seems as if Manga didn’t create their own translation either. At least it was easy to read and made sense. There is a signs only track, but it seems to be pointless, as the only place where signs are necessary, translating the end theme lyrics, they aren’t used. You only get the end theme lyrics in the main subtitle track.

The images used in this review are sourced from the PR and aren’t necessarily representative of the final retail release.

We do get the US extras though, beginning with the trailer for the film. An interesting addition is the movie’s storyboards, presented in their entirety in a 22:31 minute slideshow gallery, some 540 pages worth. 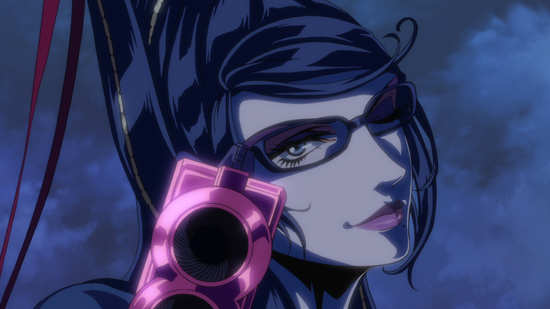 An interesting addition is the audio commentary, which isn’t the usual Funimation affair. Instead ADR Director Jonathan Klein flew over to the UK to interview Helena Taylor, the English voice actor who plays Bayonetta in the movie and the videogames. It has a different perspective from the usual anime commentaries, and is easy to listen to.

Here’s the ride I went on while watching this film. It certainly didn’t start well, hitting me at ground zero with a multi-megaton Exposition Bomb. I felt I had to take notes to keep it all in some semblance of order. Then the film proper started, with an action set piece set in a church, establishing the world in which Bayonetta lives, the foes that she has to face, and the style with which she handles herself. She’s interesting to say the least. She has that slutty villainess thing down, always talking in innuendo, striking sexy poses when she fights, and apt to lick her weapons when a battle gets her really excited. You know what they say about guns as phallic symbols... 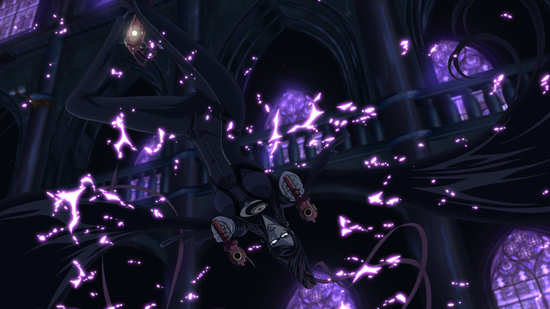 This is weighed down a fair bit by the kind of special jargon that only a fan favourite franchise can get away with, the kind of specialist knowledge that can alienate a newcomer. I was feeling alienated, but I certainly did appreciate those villainess tendencies portrayed by the heroine of the film, which changed things up a bit. And of course there’s that thing Bayonetta does with her hair... My interest was growing by the second act, aided in many ways by the supporting cast, and the subplots that were being introduced. Luka, the vengeful photo-journalist has a curious relationship with Bayonetta, as she looks on him as some kind of pet, while he’s not all that enthusiastic when it comes to proving that she murdered his father. The film also takes a turn for the interesting when little Cereza shows up, looking for her mummy. 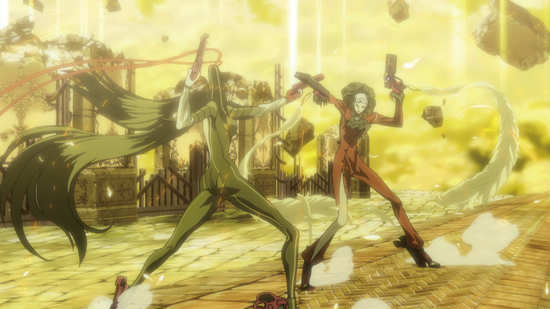 It’s also seriously well animated, with action sequences presented in the Matrix style, and the look of the animation, the feel of the story reminding me strongly of Devil May Cry. It turns out that’s not a coincidence as the Devil May Cry franchise and Bayonetta share a creator. But then the final act arrives, and the film goes all to pot, with a ridiculously daft climax that strains credibility beyond breaking point, one of those over the top endings where the creators just try to make it bigger, more spectacular, and with louder explosions, without considering how the story balances. It’s not quite Gurren Lagann or Kiddy Grade ridiculous, but it’s pretty close. 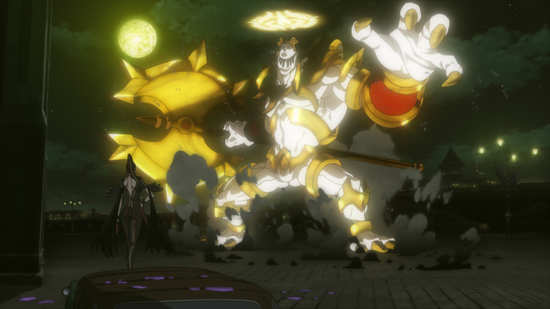 Bayonetta: Bloody Fate isn’t anything special, it’s daft, forgettable, but watchable enough, and if you’re in the mood for the kind of fan service that appeals to the nineties anime fan, just the slightest bit misogynistic without crossing over into offensive, then this film will pass the time. That hair thing though...