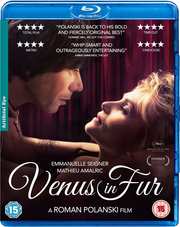 Fans of Roman Polanksi will be happy to hear that one of his more recent works, Venus in Fur, is finally hitting Blu-ray on 28th July courtesy of Artificial Eye, along with a refreshed DVD release.

Based on the award-winning play by David Ives, this stars Emmanuelle Seigner and Mathieu Amalric. With a runtime of 96 minutes and a 15 certificate, alas no details on extras yet, but we can tell you the recommended retail price will be £15.99 for the standard definition release and £19.99 for the HD version.

After a day of auditions for the female lead in his new play, writer-director Thomas hasn’t found anyone suited to the role. As he is about to leave a brash, unschooled actress named Vanda unexpectedly bursts in and Thomas reluctantly agrees to let her try out for the part.

Within seconds he is stunned by her immediate transformation into a living apparition of his character. But as the likeness begins to appear to be much more than skin-deep and the extended audition builds momentum, Thomas moves from attraction to obsession.