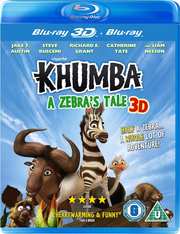 With the impending school summer holidays fast approaching, there will no doubt be occasions when it's raining and the kids can't play outside, so what better thing to throw them in front of than a family animated adventure arriving on 28th July courtesy of Kaleidoscope Home Entertainment.

With a runtime of 85 minutes, Khumbra: A Zebra's Tale will be arriving on DVD and Blu-ray 3D, priced at £17.99 and £19.99 respectively. It features voice work from Liam Neeson, Catherine Tate, Richard E Grant, Steve Buscemi, Laurence Fishburne, Annasophia Robb and Jake T Austin.

For Khumba, a young zebra born with only half his stripes, life is not all black and white. When his superstitious herd blame him for the sudden drought affecting their homeland, Khumba must embark on an adventure to find the legendary watering hole where the first zebras got their stripes.

His mission teams him with a sassy wildebeest and a flamboyant ostrich and together they set out on a daring quest to find the mythical watering hole. Their adventure takes them across the Great Kagoo desert where Khumba and his friends meet a host of quirky and colourful characters, including coming face-to-face with a tyrannical leopard in an epic battle to earn his stripes.